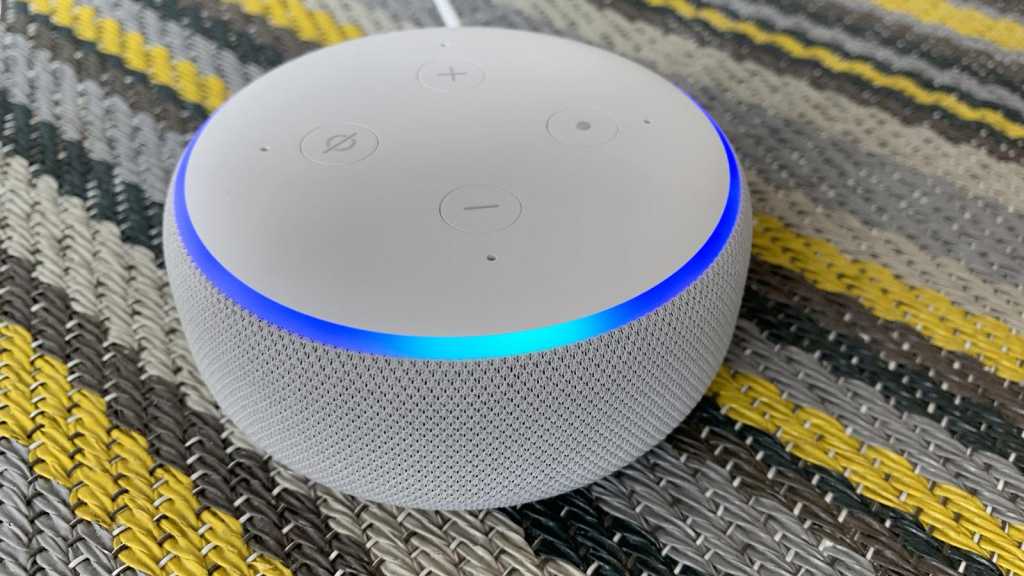 The new Dot is fantastic. It sounds a lot better, looks a lot better and is still as cheap as ever. There are no playful colours on offer, and you can no longer power it from a USB power bank, but these are minor quibbles and are somewhat offset by the fact you can use two Dots as a stereo pair and even add an Echo Sub for 2.1 sound.

The choice of smart speakers is expanding rapidly and some have even gained screens, such as the Google Nest Hub and Echo Show 5.

But it’s the entry-level models that are most people’s first experience of a smart speaker with a voice assistant. Compared to the assistant on your phone, a mains-powered device that you can use completely hands-free is much more convenient.

And since Alexa is no less capable on the new Echo Dot 3 than any other Echo, you’re not limited on what you can do because you bought the ‘cheap one’. The only real difference is sound quality, but that has been vastly improved with this 3rd-gen model.

The original Echo Dot has been around for a long while but now Amazon has refined the design, softened the plastic finish and given it a new speaker. In fact, the new 2018 Echo Dot is so good, it’s a real bargain.

It’s often on sale, and you have a choice of white, grey or black. We can’t help think that Amazon could have been a bit bolder with the colours, something Google has done with its Home Mini, the Dot’s direct competitor at the same price.

In fact, the battle between Google and Amazon has no signs of slowing down. This is good news, since it means both assistants are constantly getting new features and capabilities.

And it is worth reading our comparison of the previous Echo Dot and the Home Mini to get a better sense of which you should buy if you don’t already own an Echo or Google Home device.

Clearly, the Dot has had a complete makeover. It’s bigger for a start – the old version is on the right here – and has a band of fabric around the edge which doubles as a speaker grille and looks a lot nicer. It makes the Dot 3 more of a soft furnishing rather than geeky gadget.

But it still looks similar and you get the same four buttons on top for controlling volume, muting the microphones and stopping alarms or calling Alexa without saying her name.

The old model had seven mics, but the new one has four – that’s why there are four holes on top. It works just as well though, which means it will occasionally pipe up even though no-one has said “Alexa”, and will struggle to hear you when music is playing loudly or there is a lot of ambient noise. In general, and in a relatively quiet environment, it’s very reliable.

One of the more subtle changes is that it now comes with a 15W power supply and no longer has a microUSB power input. This is annoying, as one of the great things about the original Echo Dot was that you could run it from a USB power bank and turn it into a portable smart speaker.

Of course, Alexa is only useful with a Wi-Fi connection but if you wanted some outdoor tunes, you could grab a power bank and take your Dot into the garden.

Fortunately there is still a minijack output so you can connect your own speakers, and you can even pair the Dot with most Bluetooth speakers as well.

However, if you are planning to connect your own speakers, there’s a new option: Echo Input. This is really a Dot with no speakers and will save you money as it costs only £34.99 (but isn’t yet on sale, so you’ll have to wait until later this year to buy one).

The other big new feature is the ability to pair two Echo Dots to form a stereo pair. This might not be a big deal for you but since you can now add an Echo Sub to your Dots for a bass boost, it can be a proper music system rather than something you use for mere weather forecasts and news updates.

The final feature is the LED light ring. This is the same as on other Echos, but it’s not to be overlooked. The fact it lights up brightly when you say Alexa is a lot more helpful than the hard-to-see lights on top of a Google Home Mini. That’s because you need to know at a glance if the assistant is ready to listen to your command, rather than reeling it off and then realising she never heard the wake word in the first place.

The second-generation model was the first to be sold in the UK but was essentially identical to the first-gen as far as looks, features and sound are concerned. And there’s no denying that it wasn’t great for music.

But the third generation largely fixes this with a new 1.6in speaker that delivers a fuller mid-range and even a touch of bass. Alexa’s voice sounds much better quality and music is more than tolerable.

It won’t satisfy anyone after the kind of sound quality you’ll get from an Apple HomePod or Google Home Max, but you’ll never get that for under 50 notes. It also brings it on a par with the Google Home Mini which always sounded better than the old Echo Dot.

Unfortunately we haven’t yet had a chance to pair the new Dot with an Echo Sub so we can’t say exactly how good the combo sounds, but we have heard the Sub with the second-gen Echo and it sounds pretty good. Not room-shaking good, but it adds the missing bass you need for music and does it wirelessly so it doesn’t mess up your room.

Better still, Amazon has made the sound adjustable so you get the bass and treble controls that so many speakers lack these days, forcing you to live with the tuning that it comes with.

If you’re already familiar with Alexa, skip this section. But if she’s new to you, you’ll want to understand her functions and capabilities.

She can answer basic questions, set alarms, reminders, timers, add things to your shopping and to-do lists and a whole lot more.  She’ll give you a weather forecast, the news headlines and can send messages to other Alexa users.

She isn’t quite as good as Google Home at answering general questions – those that you might type into Google, for example – but there are thousands of Skills you can enable in the Alexa app which add to these core abilities.

Some of these are specific to smart home hardware such as plugs, lights, thermostats and other gadgets. This is where a home assistant really comes into its own as you can say, “Alexa turn on the lights” when you walk into the room.

If you have capable Wi-Fi bulbs you can even say “Alexa, make the lights pink” or “Alexa, dim the lights”.

As we said, Amazon is always adding new features and one recent one is Routines. This lets you combine several actions into one command. So you might choose to say “Alexa, Good Morning” to turn on the kitchen lights and give you a weather forecast and news briefing.

Is Alexa better than Google Assistant? That’s a debate that will likely rage on for years and there is no clear winner. Each has strengths and weaknesses and each has its fans which will staunchly defend it against its rival.

This latest Echo Dot is undoubtedly the best yet. It may be a little larger than before, but it’s still much more discreet than the bigger Echo 2. And we like the Sandstone Fabric colour that we were sent for review: it looks good on a white window sill or wooden shelf. It sounds pretty good, too, for its small size and if you want to later on you can buy the Echo Sub and improve audio quality to a level where it’s perfectly usable for music.

If you want stereo sound and you buy two at the same time it will cost you just £90 / US$90 which isn’t a bad price, but most people will be better off getting two and putting them in different parts of the house. Ultimately, the Echo Dot is a tiny marvel that gives you all of Alexa’s capabilities for a tiny price.