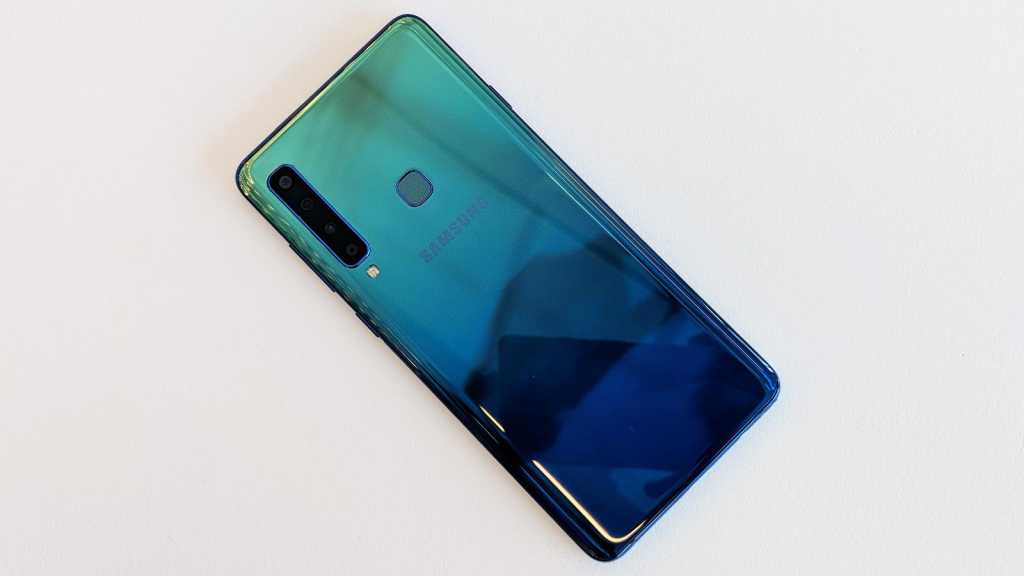 Without actually getting the chance to properly put those four lenses through their paces, it’s impossible to assess the A9. It looks slick, and the substantial storage and AMOLED screen should soften the blow of paying £549 for a mid-range processor. Still, this phone is all about the camera, and right now we don’t know if those extra lenses are the next step forward or a goofy gimmick.

Samsung’s Galaxy A series has rarely yielded exciting phones – they’re mostly mid-range devices with last year’s S or Note specs in a more budget-friendly design. That’s changed with the A9, which offers something even the Note 9 doesn’t: four rear cameras.

That’s not just a first for Samsung, but a first for any phone, so it’s surprising to see the breakthrough relegated to the A series. But it comes at a (literal) cost – so are extra lenses enough to make up for a price that’s higher than some rivals’ flagships?

The Galaxy A9 isn’t out yet, and in fact you’ve got a little while to wait. Samsung told us the device would launch some time in mid-November, though we don’t know anything more specific than that yet.

In the UK it will cost £549, though we don’t yet know the US or Euro price of the phone. That’s a steep asking price for what the A9 offers though: it’s actually higher than the £500 cap we use for our mid-range phone chart, and puts the A9 in direct competition with flagships like the £469 OnePlus 6 or £599 LG G7 ThinQ.

It’s also a £100 jump from the Galaxy A8, released earlier in 2018, though to be fair there’s a considerable improvement in specs from that phone too. But with so many other brilliant phones available for less than £500, these four cameras will have to really impress to make the A9 stand out.

Four is the magic number

Let’s cut straight to the chase. Those four rear cameras are the real star here, representing the first time any smartphone has packed four lenses in one spot.

Aligned vertically in the corner of the phone’s body, each lens is optimised for a different type of photo, hopefully resulting in one of the most versatile camera setups around.

The primary lens is a 24MP shooter that will underpin basically every photo you take, with an aperture of f/1.7 to help deliver strong low-light performance too. It’s backed up by a 5MP depth lens used for the portrait/bokeh effect, a 10MP ultra-wide lens (120 degrees, supposedly to mimic the human eye’s field of view), and an 8MP telephoto lens with x2 optical zoom.

I’d love to be able to tell you just how those four lenses performed in the real world, but unfortunately we were only given access to pre-production hardware which was suffering from a few glitches that made the camera difficult to really assess. We’d expect all the problems to be ironed by the time the full release rolls out, but it means that right now even though I’ve used the phone, I couldn’t really tell you if the camera’s any good or not.

There are at least a few more tech specs and features worth mentioning. The A9 can shoot video up to 4K normally, or in slow motion or super slow motion at lower resolutions, along with various stills modes including panorama, beauty mode a scene optimiser, and the portrait, wide-angle and zoom modes enables by the three extra lenses.

Then there’s the single front lens (bringing us to five total). That’s another 24MP lens, though at aperture f/2.0, and comes backed up by all the usual selfie features you’d expect.

It’ll take some proper processing power to make the most of those four lenses, and while the A9 is hardly packing top-of-the-line specs, it should hold its own. The octa-core Snapdragon 660 is a solid mid-range chip that should deliver strong performance across the board, and help the A9 keep up with just about anything you throw at it.

Just as importantly, Samsung has thrown an impressive 6GB of RAM into the phone, so it should ace multitasking, while 128GB of storage makes the price more understandable – after all, the 128GB version of the OnePlus 6 sits at £569 in the UK, £20 more than the A9. And just in case that’s not enough, you can add on up to another 512GB via microSD card.

Finally, a 3,800mAh battery should be enough to see this coast past the 24-hour mark on typical usage, and we wouldn’t be surprised if plenty of people see it last a couple days on the trot.

With all those cameras, Samsung was very clear that it’s targeting the A9 at the Instagram-obsessed, so it’s no surprise to see it’s put some work into making sure the phone itself looks the part too.

That starts with the 6.3in Full HD+ AMOLED screen – what Samsung calls an ‘Immersive Display’ to distinguish it from the flagships’ ‘Infinity Display’. That means you still get some bezels and it doesn’t wrap around the body, but it’s still a big, beautiful screen – an area Samsung has always excelled.

6.3in is a lot of screen though, especially with bezels along the sides, so the A9 isn’t exactly compact. Measuring 162.5x77x7.8mm, and weighing 183g, this isn’t a phone for small hands, though it’s still comfortable to hold.

The back of the phone is obviously dominated by that ludicrous lens array, but you’re more likely to spot the striking colours first. The glass-bodied phone (no wireless charging though, sadly) is available in your choice of Caviar Black, Lemonade Blue or Bubblegum Pink – the latter two of which take a leaf out of Huawei’s book with some really stunning gradient finishes.

In terms of the rest of the build, there’s only a single speaker, but you do at least get a headphone jack (with support for Dolby Atmos) along with USB-C for charging. There’s also both NFC and Bluetooth 5.0 under the hood.

As for software, the A9 ships with Android 8.0 (overlaid with ‘Samsung Experience’, the company’s proprietary Android skin), but Samsung reps said that an over-the-air update to Pie 9.0 is ‘on the way’ – though couldn’t give a more precise estimate than that.

Without actually getting the chance to properly put those four lenses through their paces, it’s impossible to assess the A9. It looks slick, and the substantial storage and AMOLED screen should soften the blow of paying £549 for a mid-range processor.

Still, this phone is all about the camera, and right now we don’t know if those extra lenses are the next step forward or a goofy gimmick.