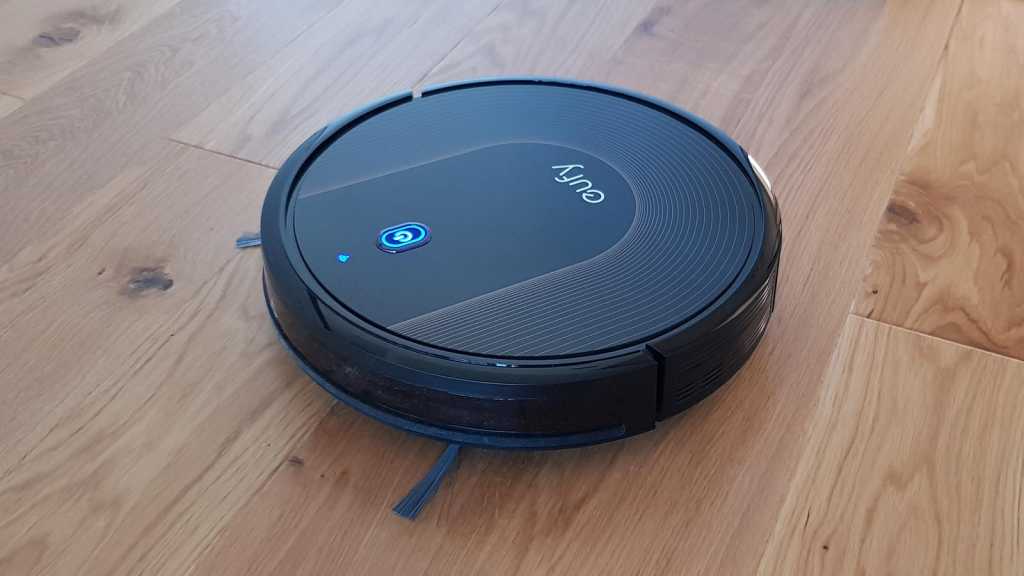 RoboVac 30C takes you one step closer to eliminating the household chores with Google Assistant and Amazon Alexa support for voice operation. With full Wi-Fi support you can also trigger cleaning from anywhere you happen to be through the mobile app, or there’s a handy remote control if you prefer the old-fashioned way of doing things. Cleaning itself is pretty good, with powerful yet quiet suction from the 1500Pa inlet with rolling brush and two spinning side brushes, while the low-profile design makes getting under most furniture easy.

Eufy is an Anker-owned brand that makes some great smart home kit. The RoboVac 30C is the latest in its robot vacuum cleaner range, and sits at the top of the pile with some great connected features.

You might think the RoboVac 30C looks a little familiar, and that’s because it’s visually identical to the popular RoboVac 11S and RoboVac 30 before it.

It’s a RoboVac 30 with the addition of Wi-Fi connectivity, allowing you to remotely trigger cleaning from anywhere in the world, and with full Google Assistant and Amazon Alexa integration providing the option for control via voice alongside the traditional mobile app and remote control methods.

If you want to know what’s out there from other brands, take a look at our ranked guide to the best robot vacuum cleaners for more options.

Where to buy the RoboVac 30C

The 30C is now the most expensive model in Eufy’s line-up, but we still think it offers excellent value when compared to the Dysons, Samsungs and other huge-name brands in this market.

This Eufy vacuum cleaner is similar to other models on the market with a rounded body and two spinning brushes that sit at the front, pulling in dust and other grime from hard to reach areas and hurling it in the path of the 1500Pa inlet. There’s also a rolling brush here, which is not a given on all robot vacuums, making the Eufy 30C suitable for short- to medium-pile carpets as well as hard floors.

It worked pretty well in our tests, offering a useful interim clean that meant we didn’t have to drag Henry the Hoover out from under the stairs quite so often. (On that note, stairs are one thing robot vacuum cleaners can’t manage just yet.)

The 30C has a reasonably low profile, which means it can glide under furniture that stands more than 73mm high. A pair of sizeable wheels allow it to climb up to 16mm to get over floor thresholds and other obstacles, though the Eufy did encounter some problems with the shiny chrome surface and sloping design of our breakfast bar stool bases, often getting itself stuck.

For scenarios such as this Eufy should be applauded for its inclusion of two reels of magnetic boundary tape in the box, as well as a bunch of cable ties for tucking away loose wires you don’t want to get sucked up by the RoboVac 30C. Simply stick sections of the tape in areas you want to block off access, and the robot vacuum will stay at least a few inches away from their location.

As you’d expect there are also anti-drop sensors to stop it throwing itself down the stairs or into other precarious situations. You’ll need to keep these clean to ensure they work correctly.

This isn’t the only maintenance you should perform, and as with all vacuum cleaners the parts aren’t intended to last forever. Eufy recommends that the filters are replaced every two months, the rolling brush once or twice a year depending on usage, and the side brushes and brush guard every three- to six months or when visibly worn. Some spares are provided in the box, with extra filters, two spare side brushes and a cleaning tool all included.

There’s a 2600mAh battery inside, and when the charge depletes the RoboVac 30C will be a good little robot and return to its base for recharging. This takes between five and six hours, and when complete the LED built into the single power button on the unit’s top will glow blue, but actual cleaning time is less at around one hour in max mode or 100 minutes in auto mode.

The dustbox is reasonably generous in capacity at 0.6L, and is accessible via a button at the front of the 30C. You will have to remember to empty this reasonably regularly and you won’t get a warning when it’s time to do so. On the subject of warnings though, we did like the sticker on the bottom of the device listing common error codes: finding the user guide in order to solve an issue months after you’ve thrown away the product’s box isn’t always straightforward.

It’s difficult to properly test this feature, though Eufy claims the RoboVac can intelligently and automatically ramp up the suction power to the max 1500Pa when required using BoostIQ technology.

Other intelligent features built in include the aforementioned Wi-Fi support, which allows it to work with the EufyHome mobile app on any Android or iOS device, and Google Assistant and Amazon Alexa integration. There is no support for IFTTT or HomePod, however.

Despite the superior suction power, the RoboVac 30C is not particularly loud in use. The company claims it’s no louder than a microwave, and at around 55dB is quieter than a traditional vacuum cleaner. We certainly didn’t find it overly obtrusive in our home as it scurried about doing its business.

The RoboVac 30C has four main modes of operation: Auto, Edge, Spot and Quick cleaning. There are no operational controls on top of the vacuum itself, though you can trigger cleaning in three smart new ways.

First, through the bundled remote control, which takes two AAA batteries (also supplied). It’s pretty straightforward in use, providing buttons to switch between cleaning modes, start and stop cleaning, return the 30C to its base, as well as some navigational controls for manual cleaning.

Then there’s the free mobile app, available for Android and iOS devices. Simply install EufyHome from your app store, then ensure your phone or tablet is connected to your home Wi-Fi network. The app guides you through the setup process, instructing you to create a user account and connect the 30C to your Wi-Fi network. Once complete there’s a quick tutorial that guides you through the app’s main functions.

You can get by without installing the app, and you do not have to connect the RoboVac 30C to your home Wi-Fi network to operate it in your home. However, the mobile app is essential if you want to trigger cleaning when you’re away from home, for setting cleaning schedules (you can select a different time for each day of the week), or updating the firmware.

You’ll also find a ‘Find My Robot’ feature in the app, which doesn’t seem all that useful until your RoboVac manages to get itself stuck under a sofa or a pile of clothes and is unable to return to its base for charging. When you activate this feature the 30C will begin beeping, and continue doing so until you turn it off.

The mobile app is also useful for sharing the vacuum cleaner with other family members. They will need their own EufyHome account, but then can access all the same features as you.

And you can use the app to give the cleaner a name: ours is Eugene.

The third mode of operation is using a voice assistant, Google Assistant built into Google Home or Amazon Alexa built into Echo devices. We tried the Eufy RoboVac 30C with Google Home and found it very intuitive in use, but you will need to read the instructions for setup because it’s not what you might expect.

Having first set up the cleaner on your Wi-Fi network and configured the mobile app, you open the Google Home app on your phone or tablet and say: “Okay Google, talk to RoboVac”.

Google Home will then prompt you to allow it permission to access EufyHome, and you’ll need to provide your login details. Once this is complete you can begin controlling the RoboVac using your voice.

Some useful commands include:

In our tests this mode of operation worked seamlessly and makes automating the boring household chores one step closer to reality.

As with any robot vacuum cleaner the RoboVac 30C will not eliminate the need for a traditional vacuum every so often, but it has sufficient suction power to keep tidy your floors and carpets on the days you’d rather put your feet up and chill.

The ability to connect it to your home Wi-Fi network for remote operation is cool, although nothing new, but we love the voice assistant integration for proper lazy boy cleaning. If your budget can stretch this far the RoboVac 30C is highly recommended.