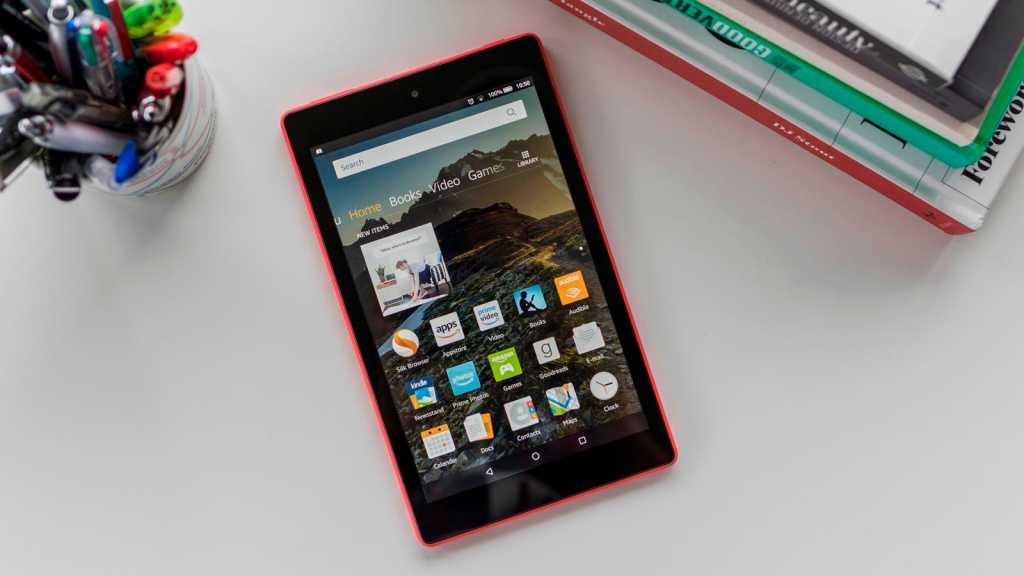 The Fire HD 8 is the best budget tablet if you want to spend less than £100 on a tablet that streams Amazon Prime Video and Netflix. There is no better option.  It is the same as older models though, save for Show Mode. If you also buy the Show Mode Charging Dock, it’s a very affordable way to have a smart display in the home with the convenience of a tablet to carry daily.

If you already know about Amazon tablets or have owned one, there’s not a lot actually new about the “All-New” Fire HD 8. But that doesn’t mean it’s not worth buying. Here’s our full review.

Like the latest version of the larger Fire HD 10, it adds hands-free Alexa to a tablet that costs less than £100. Amazon also hopes you’ll buy a special stand that turns the tablet into a device more like its Echo Show.

We still balk at having to pay Amazon £10/$10 more to get the same product without ads, but that’s what you’ll have to do if you also object. You can also pay more for 32GB storage with or without ads.

Aside from this gripe, £79.99 is an excellent price for an 8in tablet with an HD resolution display. Let’s not forget that.

This 8th gen Fire HD 8, which was released at the end of 2018, is practically identical to the 2017 model. On our red review unit, the volume and power buttons are now red too instead of silver like before, but this is the only aesthetic change.

The 8in display has a 16:10 aspect ratio, making it a noticeably different shape to the similarly sized iPad mini 4 that has a 4:3 screen. It doesn’t look like the screen has an oleophobic coating though, meaning the screen gets pretty smudged up pretty quickly.

Big black bezels and a variety of coloured plastic backs (Black, Marine Blue, Punch Red, Canary Yellow) give away the budget nature of the Fire HD 8 but it’s a solid thing to hold. You might not love the idea of a cheap-feeling plastic tablet but the cash you save is a no-brainer if you’re on the fence.

The rest of the red body houses a camera, headphone jack, microUSB port, a mic and dual stereo speakers. These speakers are on the left edge when held portrait, indicating this is primarily considered a video consumption tablet to be used in landscape.

It’s telling that this tablet is cheaper than most Amazon Kindles despite the Fire HD 8 having an HD colour screen, and the compromise is build quality.

But what you lose in build quality compared to more expensive tablets melts away if you are buying the Fire HD 8 to consume media – Amazon media, Amazon hopes.

The 8in IPS LCD display has a 1280 x 800 resolution. This is a little under the Full HD resolution you’ll find on the Fire HD 10 but it’s still pretty good.

Streaming video over Wi-Fi on Prime Video looks good, though pixel peepers will want to upgrade to the HD 10 for the full HD effect. Video in HD on the HD 8 looks pretty great considering the price, but it’s clearly not as razor sharp as other higher resolution displays offer.

It has a certain murky quality to it at times though, and unless your screen is perfectly clean (which it often isn’t) you might be straining to see everything on it unless you’re in pitch black. In some scenes on Mr Robot and The Americas, greys and blacks bled into one another and we found it difficult to see what was going on.

You can also read books on the Fire via the Kindle app. It’s not preferable to the e-ink screens of Kindle devices, but it’s a nice-to-have. An aggressive reading mode called blue shade very much strips the display of blue light for reading books though, and the Fire HD 8 a cheap way of accessing the enormous Kindle store on a device that can also stream video and surf the web. 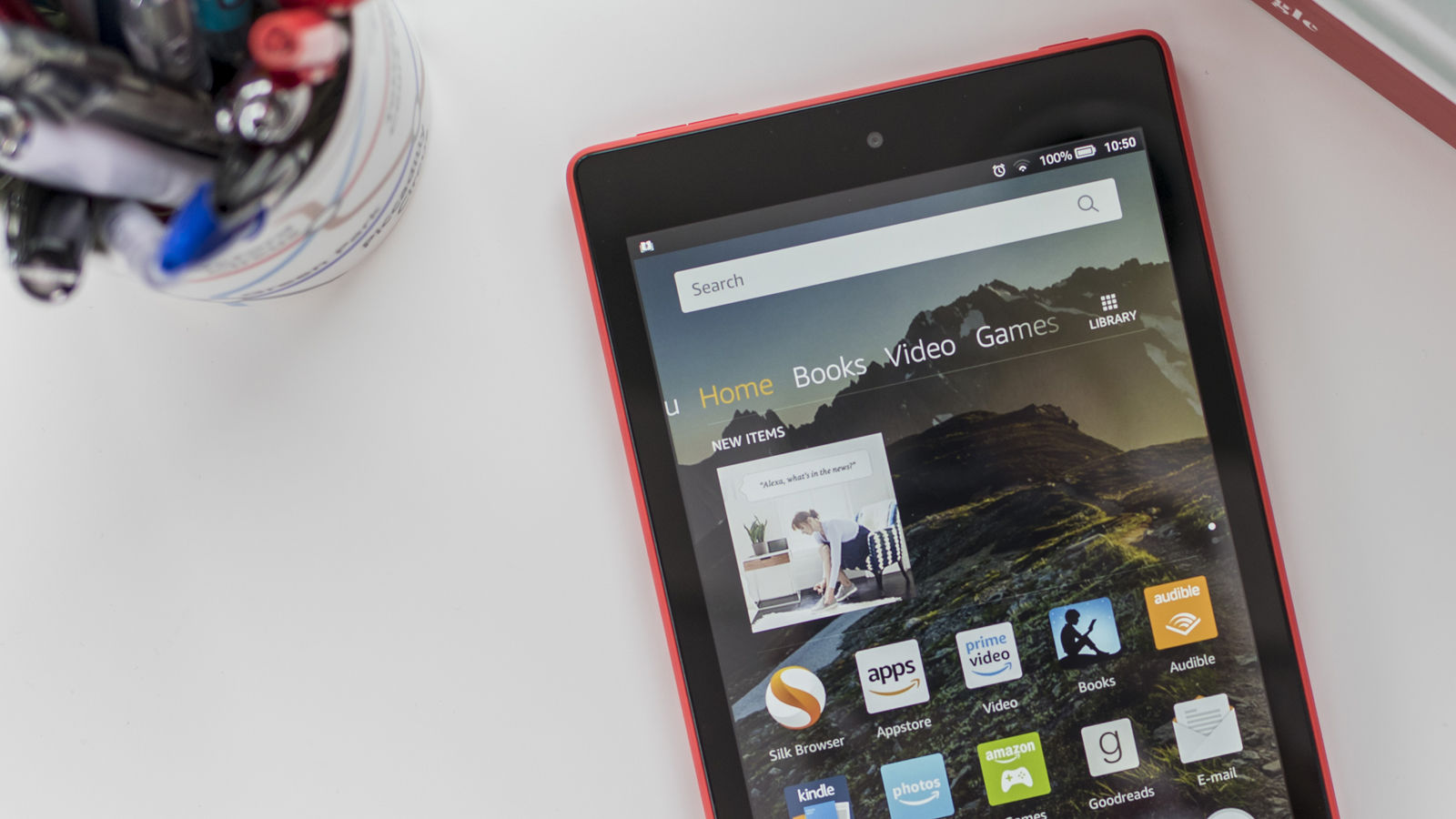 The new feature for the 2018 Fire HD 8 is Show Mode. This is basically hands-free Alexa – saying Alexa followed by a query will work now just like it does on an Echo speaker (before you had to have the screen of the Fire HD 8 turned on or it wouldn’t work).

It’s called Show mode because it shows you information clearly on easy to read screens, and also because it’s a lot like the standalone, wall-plug Echo screen device the Echo Show.

You can manually put the tablet into show mode from the notification shade.

Amazon also sells a Show Mode charging dock specifically for the Fire HD 8. If you want to use it as a Show-style device then this is essential.

This will allow you to use voice commands to play music, video, look at photos, watch the news and search the web.

The dock needs mains power and basically turns your tablet into an Echo Show. There’s a fully adjustable stand and a separate clip-on back cover for the tablet with a microUSB connection that makes it all work.

It connects with magnets so there’s no cable to unplug each time you set it on and off the stand. When on the dock it automatically enters Show Mode. It’s surprisingly cool.

We tested it out in the kitchen, asking it to show us a chilli con carne recipe, which it did successfully via Amazon-approved and integrated app Recipedia. Using voice commands to go through the steps, it was very intuitive.

This is a genuinely useful accessory for an affordable tablet. You can add the dock at point of purchase, but it is an extra £40.

If you know anyone with the same set up or an Amazon Echo with a display then you can also video call them.

On a device like the Fire HD 8 you may not be overly concerned with the processor, memory and storage. Why? Well, it’s primarily a streaming device, so you’ll only really need to storage to temporarily download videos to watch offline (though if you have video files on a PC you can move them onto the HD 8 using a microSD cable).

You can choose between 16GB or 32GB storage, though there’s a microSD card slot if you want to expand up to 400GB. You’re probably not going to fill that up.

1.5GB RAM is a bit stingy, but again for the price it’s more than enough. The tablet does lag a bit in operation between apps but when all you’re likely to be doing is loading up a video and then letting it play, it’s not a big deal.

The dual speakers are adequate for watching video on your own, but they are in no way room filling (nor is the screen big enough for group watching). They also support Dolby Atmos, but we didn’t really notice this on speakers so low powered.

They are not very good, but they are there. This is all you need to know about a budget tablet’s cameras to be honest, in terms of photography.

But the 2Mp front facing lens is good enough for video calling while in show mode.

We found the battery life on the Fire HD 8 to be as advertised by Amazon, getting around 10 hours of use before reaching for the charger. This was slightly less when constantly binging episodes of Man in the High Castle on Prime, but this is also to be expected.

If you’re carrying it around it’ll definitely last you two days.

The Fire HD 8 runs a version of Android with Amazon’s skin over it, but you can’t get Google apps on here. Amazon doesn’t like Google and this is pretty much why. If you are a Prime subscriber then this shouldn’t be too much of an issue, as you can watch Prime Video, listen to Prime Music and buy stuff on Amazon.

This is not a tablet to buy if you want to get work done on it. It doesn’t have the Google support, and it isn’t powerful enough. Performance is fine for what it is meant for though – reading Kindle books and watching videos.

If you don’t need Google apps on your tablet then this is the best cheap tablet going. It’s worth the extra spend over the Fire 7 for the larger, better screen.

And now you can use Alexa hands free, or pair the Fire HD 8 with the clever Show Mode dock to get an affordable smart display for home use. If you want to watch video on Prime and Netflix and not much else then this tablet is a no-brainer.