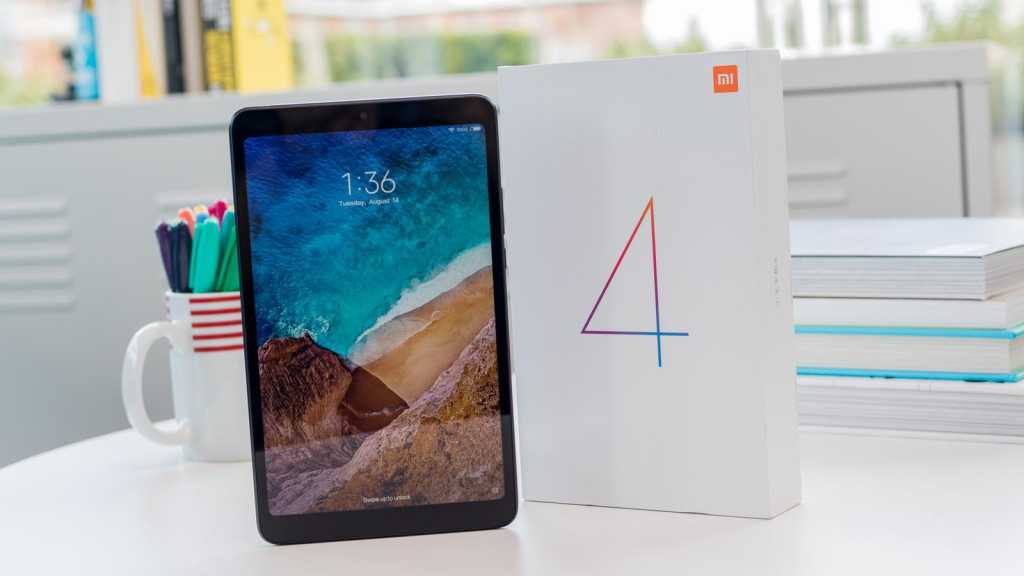 Xiaomi has made some significant improvements to its budget Mi Pad, reducing the overall dimensions of this 8in tablet so it’s easier to user in one hand, upgrading the core hardware for decent performance, adding microSD support up to 256GB, and moving the speakers to a more considered position on the bottom edge. This Mi Pad 4 is right up there with the best budget tablets, especially when it comes with change from £200.  Xiaomi’s fourth-gen Mi Pad is not flawless, however, neglecting to provide NFC and GPS, and reducing both the screen size and resolution and battery capacity in this latest revision. It’s also running Chinese MIUI, a custom version of Android Oreo, with no Google services preinstalled. These can be added through the Mi App Store, but that process may be confusing for novice users.

There is a distinct lack of affordable tablets on the market, particularly in the 8in form factor. Apple seems to have forgotten about its iPad mini, while Amazon’s line-up is cheap and cheerful but the lack of Google services is disappointing.

With MIUI preinstalled, which is a custom version of Android Oreo, this Mi Pad 4 also comes without Google Play, though it’s easy to install via the Mi App Store. Configuration out of the box isn’t as simple as it would be with a vanilla Android tablet, but persist and you’ll be thankful you did.

Revised for 2018 the Mi Pad from Xiaomi is now in its fourth generation. This latest revision sees the company put faster hardware onboard that now includes the Snapdragon 660 and up to 4GB of RAM. And it’s added microSD support and tweaked the design for enhanced usability and audio playback.

The result is a powerful yet easily portable Android tablet with an abundance of storage for all the games, videos and all the other things you love. Xiaomi compares it to a TV, yet easier to carry, and while that’s taking it a bit too far it is an ideal device for entertainment on the move.

Where to buy Mi Pad 4

Several versions of the Mi Pad 4 exist. Our review sample is the entry-level 3GB RAM, 32GB storage, Wi-Fi-only model, which was supplied to us by GearBest but not actually in stock there at the time of writing. You can sign up to be notified when it arrives, or opt for the next model up.

GearBest also stocks the 4GB RAM, 64GB storage Wi-Fi-only model, which should offer slightly better performance than that displayed by our benchmarks published later on in this review. You can pick up that model here for £193.75/US$249.99/€217.50.

Though the website address might suggest this is a UK store, stock is dispatched from Hong Kong. If it is stopped by Customs upon entry into the UK you’ll be asked to pay 20% import duty on the value printed on the shipping paperwork, but even accounting for this the Mi Pad 4 offers fantastic value.

The bezel is increasingly a thing of the past in new Android devices, but while Xiaomi has taken steps to reduce it on the Mi Pad 4 it’s still very much there with half an inch top and bottom and 1/5in left and right.

The slimmer body is one of the first things you’ll notice when you lift the Mi Pad 4 from its box. Though the screen is actually a tiny bit larger – 8in versus 7.9in – it’s also taller, now adopting a 16:10 aspect ratio.

The result is 13mm shaved off the width of the Mi Pad 4, which may sound insignificant but in the hand it makes all the difference. It is now possible to comfortably grip the Mi Pad 4 in a single hand without fear of it falling to the floor.

Whereas the Mi Pad 3‘s body was made from a single chunk of metal, which curved up from the back to meet the sheet of glass lying perfectly flat at the front, the Mi Pad 4 looks to have been built in sections with a new groove running the circumference of the chamfered metal frame. A top section concealing the antenna looks more obvious on the gold version of this tablet than on our black review sample in images we’ve seen.

Gone are the twin speaker grilles on the back panel, which now straddle the USB-C port along the bottom edge – a more useful positioning for audio ensuring sound from the dual speakers is fired into the room and not the palm of your hand, tablet case or desk. Sound is surprisingly good – very loud, and with little distortion even at top volume.

The 3.5mm audio jack remains, but you’ll need to provide your own earphones as none are provided in the box.

Also new is a pin-operated SIM slot on left hand side. On our Wi-Fi-only review sample this is merely a home for a microSD card, which can be up to 256GB in capacity, but on the LTE models there’s also room here to stick in a SIM card.

The Mi Pad 4 is 0.9mm thicker than its predecessor, but even so the primary camera now juts out at the back whereas previously it lay flush. It’s not so prominent that it will cause the tablet to rock when placed on a desk, but it does spoil the overall finish somewhat.

The overall build quality is high, and we much prefer the narrower body both in terms of design and usability. This might be a budget tablet, but that certainly isn’t given away by its design.

As we mentioned above Xiaomi has fitted a new taller screen on the Mi Pad 4, ever so slightly larger at 8in and adopting a 16:10 aspect ratio.

This is still an IPS panel, which makes for excellent, life-like colours and very good viewing angles. It’s a very good-quality screen, although the resolution has dropped from 1536×2048- to 1920×1200 pixels, resulting in a pixel pitch of just 283ppi compared to the previous 326ppi – the magical number Apple claimed was ‘Retina’ quality, back when it was actually worth copying the iPad mini.

It’s doubtful that the human eye would actually notice the difference in clarity between the two, and the Mi Pad 4 offers sharp images and clear text.

Blacks are pretty good too, with a claimed contrast ratio of 1200:1, while our tests with a Spyder revealed a max brightness of 349cd/m2. That’s not at all bad for a budget tablet, and should make the screen much easier to read in sunlight.

The Mi Pad 3 was fitted with a MediaTek MT8176 hexa-core processor with PowerVR GX6250 graphics and up to 4GB of RAM, which has here been replaced with a Qualcomm Snapdragon 660 and, again, up to 4GB of RAM.

The Snapdragon chip is an octa-core model built on the 14nm process and is significantly faster, integrating a powerful Kryo CPU, Hexagon 680 DSP and Adreno 512 graphics. Even using the 3GB RAM Mi Pad 4 sampled here the Xiaomi displayed a significant increase in performance over its predecessor – you can compare the results of the two tablets in the chart below.

Although this is a mid-range chip, the Mi Pad’s benchmark results aren’t far off those of last year’s flagship phones. And in real-world use we found no issues with lag when opening apps and navigating menus.

Storage is very good if you opt for the 64GB Mi Pad 4, especially now that you can add a microSD card up to 256GB in capacity.

This version of the Mi Pad 4 does not support a cellular connection, though there is an LTE model available. Do note that this model does not support FDD-LTE Band 20 (800MHz), which means you won’t be able to add a SIM from O2 or any other operators that piggyback its network (such as Sky Mobile and GiffGaff).

There’s also no support for NFC, as you might expect on a budget tablet, but we’re more surprised by the lack of GPS. It is possible to use apps such as Google Maps, but it uses Wi-Fi scanning to pinpoint your location.

It’s not often you’ll pick up a tablet to use it as a camera, but if you wanted to you could with a 13Mp camera on the rear. The Camera app is much more basic than that which you’d find on Xiaomi’s phones, which isn’t really a surprise. You do get HDR and a variety of filters, but not much else.

Round the front where you’re more likely to take advantage of the camera for video chat is a 5Mp selfie camera. Again, the app is basic, but functional. You can also use this to unlock the tablet using face recognition.

Inside this Mi Pad 4 is a 6,000mAh battery, which is down from the 6,600mAh cell inside the Mi Pad 3. According to Xiaomi battery life remains the same, with up to 12 hours video playback possible.

We used the Geekbench 4 battery test and recorded 8 hours 14 mins. It’s not a standout score in this test, with those that promise all-day life scoring closer to 11 hours, but it’s still higher than both the now ageing iPad mini 4 and more recent iPad 9.7in.

As before you should be able to get about 8 hours life from the Xiaomi, but your exact mileage really depends on what you’re tasking it with and at what volume.

Software is a bone of contention with the Mi Pad 4. It runs MIUI 9, and there’s nothing wrong with that – it’s just not what users are familiar with in the UK. And we’re not just talking about the fact it removes the app tray and lays out all your shortcuts on the home screen.

MIUI has a bunch of its own apps for things like music, video and weather, and there’s an App Store where you can source more but it’s all in Chinese.

Fortunately Google Play is also available via the Mi App Store, so you can add all the Google services with which you’re familiar, as well as an English keyboard, it’s just that it doesn’t come this way out of the box. It’s easy for me to say this is a simple process, but I’ve done it so many times I could do so with my eyes closed – it’s possible having to do this would be offputting to someone not familiar with MIUI.

Apparently the International version ships with Google Play preinstalled, but we’re testing the Chinese version and have not seen a Global ROM version of the Mi Pad 4 for sale.

MIUI typically has a load of extras you won’t find in standard Android, such as dual apps and second screen, though our review sample doesn’t appear to have those particular features. We did find Quick Ball, which places onscreen shortcuts to common actions, and a full-screen display mode which removes the onscreen navigational buttons and requires you to navigate the menus using gestures.

Mi AI is also on this device – Xiao AI is Xiaomi’s own voice assistant, but it’s not optimised for English language. You can install the Google Assistant once you’ve configured Google Play, of course.

The Mi Pad 4 is a great budget tablet, with an attractive 8in design and some competitive hardware onboard. It ticks most of our boxes, though we fear some users may find the unfamiliar MIUI operating system and lack of Google Play out of the box confusing.