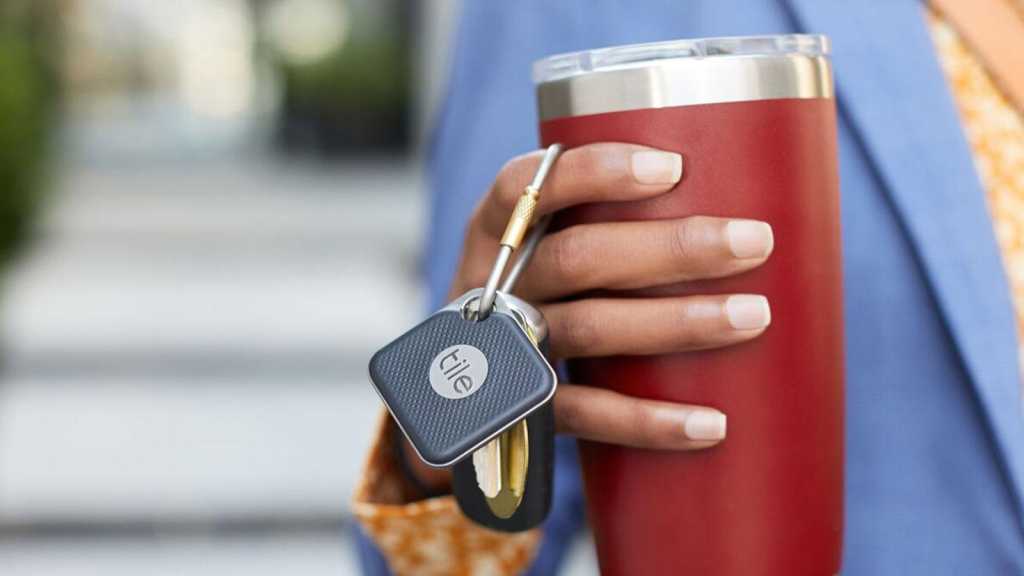 This is an early verdict, but so far, this looks to be the best Tile yet. The biggest problem with the older ones was that they were effectively disposable. But with a replaceable battery, the new Pro should last considerably longer. The louder ringer is a very welcome improvement, and makes a big difference as you can hear it from further away even if it’s in the pocket of your jeans or your bag. However, you trade off waterproofing: the Pro is splash proof but won’t survive being dropped in deep puddle. We’ll update this review when we’ve tested the Pro more fully and can say more about battery life.

Tile has the Bluetooth tracker market pretty much sewn up. It has both the community and reliability to make it work, but now it has a new gadget with everyone’s most-requested feature: a replaceable battery.

Older Tiles were great: they did the job they were supposed to do – let you track down your lost keys or wallet – but once the internal battery died, you had to buy a new one. At around £25 /US$25 a pop, with a small discount for ‘re-Tiling’ it meant plenty of people felt the disposable nature was bad for the environment, as well as their wallet.

The new range changes all that, allowing you to pop in a standard coin battery when the original runs out. And in addition to the Tile Pro we’re reviewing here, there’s a new version of the Tile mate which also has a changeable battery and costs a bit less.

Note: We’ve taken the unusual step of not awarding a score to the new Tile Pro. We need to run tests over a longer period to be sure that the new design stands the test of time and that the battery life is what Tile claims.

So despite the replaceable battery, they’re really no more expensive than previous Tiles.

Warranty, since it’s now a factor, is 12 months, but that’s extended to three years (in total) when you subscribe to Tile Premium, which offers several other benefits. That costs £29.99 per year or £2.99 per month. 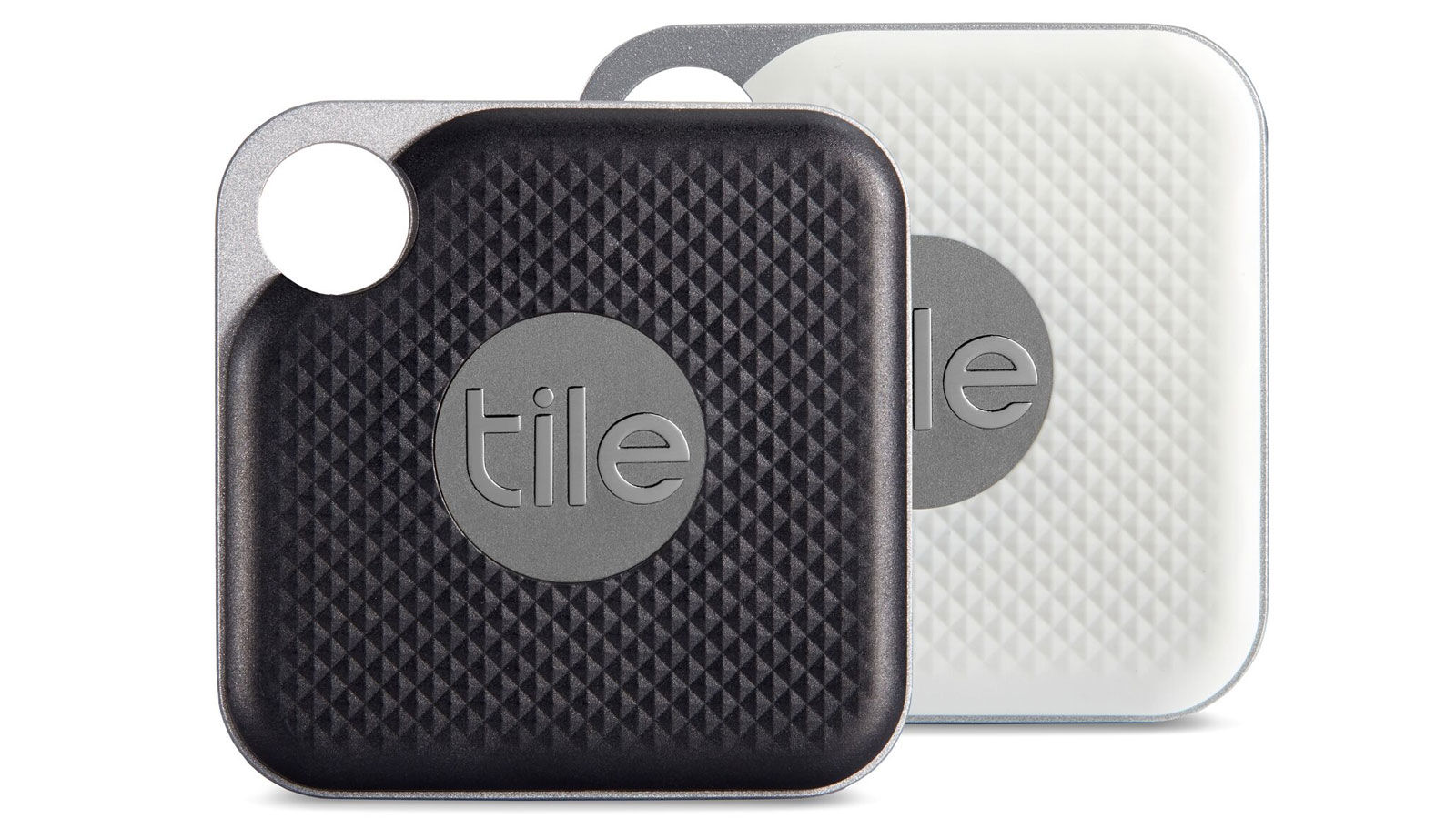 Tile says it needed a new design, as putting on a battery door isn’t as simple as it sounds. So this latest Tile has a metal core with plastic on either side. There’s a hole for your keyring and the usual button in the centre, which is used to first pair with your phone then later locate your phone by using the system in reverse: a double press causes your phone to ring.

The Pro uses a CR2032 cell, which is easily and cheaply available online, or from your local watch shop.

There’s no rubber seal, only foam inside the battery door, so you do lose one of the previous benefits: water-resistance. If that’s a deal-breaker, check out some alternative Bluetooth trackers. 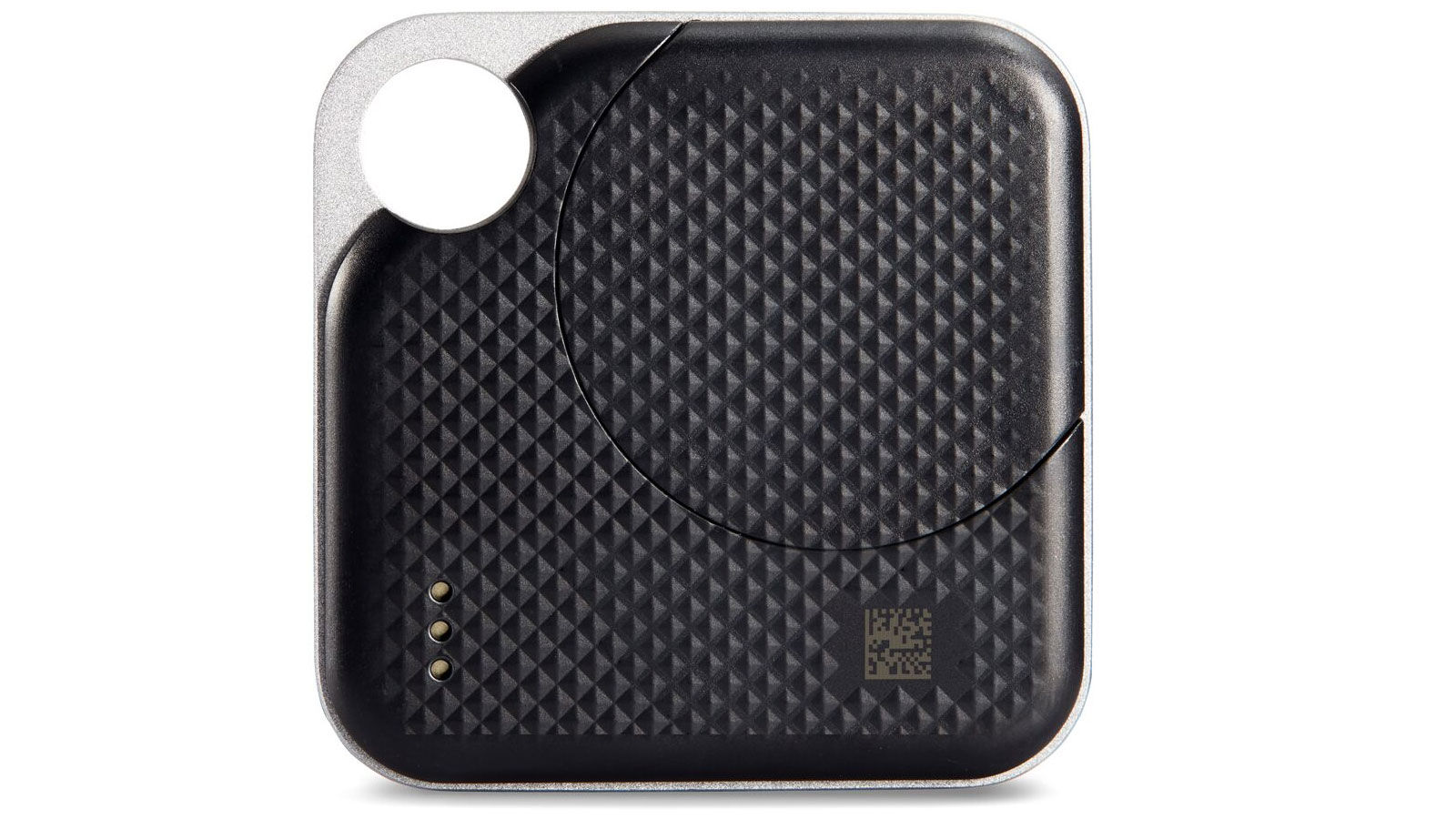 However, you gain a sounder that’s twice as loud as the previous Tile Mate, and it really is a noticeable difference, even to the previous Tile Sport and Style. This was necessary as Bluetooth range has been increased from 200 to 300 feet.

You locate a lost Tile using the companion app, which is available for iOS and Android. When the lost Tile is in Bluetooth range you can tap the Find button to make it ring. 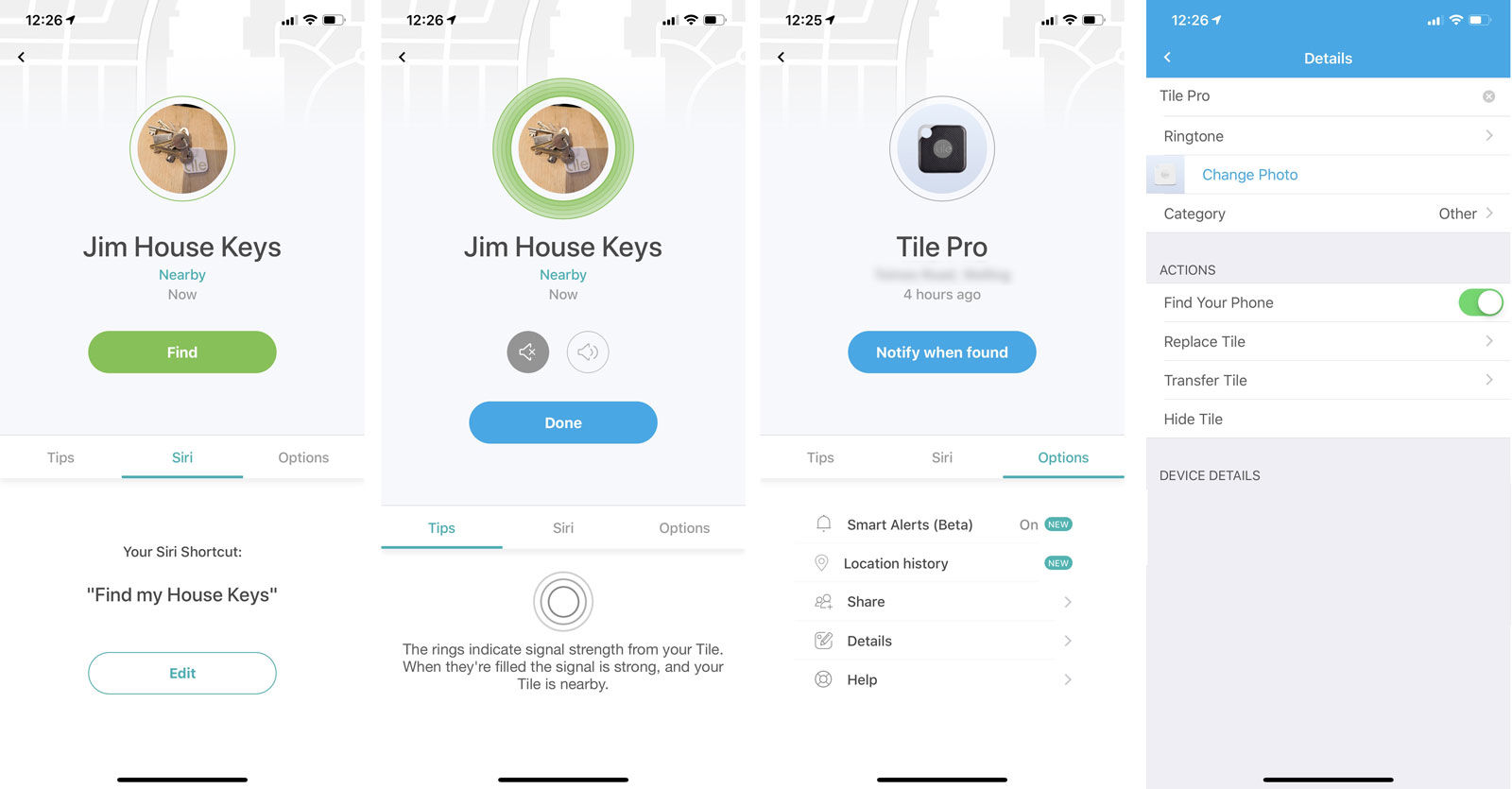 If you can’t locate it by sound, then you can walk around and use the green rings to see if you’re getting hotter or colder.

The app also shows the last known location on a map: the place it last had a connection to the Tile so you can retrace your steps.

One of the benefits of Tile is that the location of the gadgets is picked up by other people running the Tile app. This is called Community Find, so if you drop your keys at a station or other public place, there’s a chance another ‘Tiler’ will walk past and their app will record your Tile’s location.

If you mark your Tile as Lost in the app you’ll then get a notification if it’s located by someone else.

There’s integration with Alexa, Google Assistant and – now – Siri Shortcuts so you can use your respective smart speaker, or your phone, to ring a specific Tile. This a especially handy when you’re about to leave the house and you’re in a hurry: it’s quicker than unlocking your phone, firing up the app and finding the appropriate Tile in the list.

Subscribing to the Premium service gets you extras. We’ve mentioned the extended warranty, but you’ll also receive a battery through the post when yours is due to be replaced, location history and smart alerts.

The latter is a new system – currently in beta – which notifies you if you leave home (or a location you set) without specific Tiles. This works using your phone’s GPS location and isn’t simply a Bluetooth disconnection thing, which tends to give too many false alerts.

You can’t set the range, though, and the alert happens only after around a mile, which could be too far for some people. However, if it saves you a much longer round trip to pick up your wallet or a crucial bunch of keys, it’s likely to be well worth the slight inconvenience. 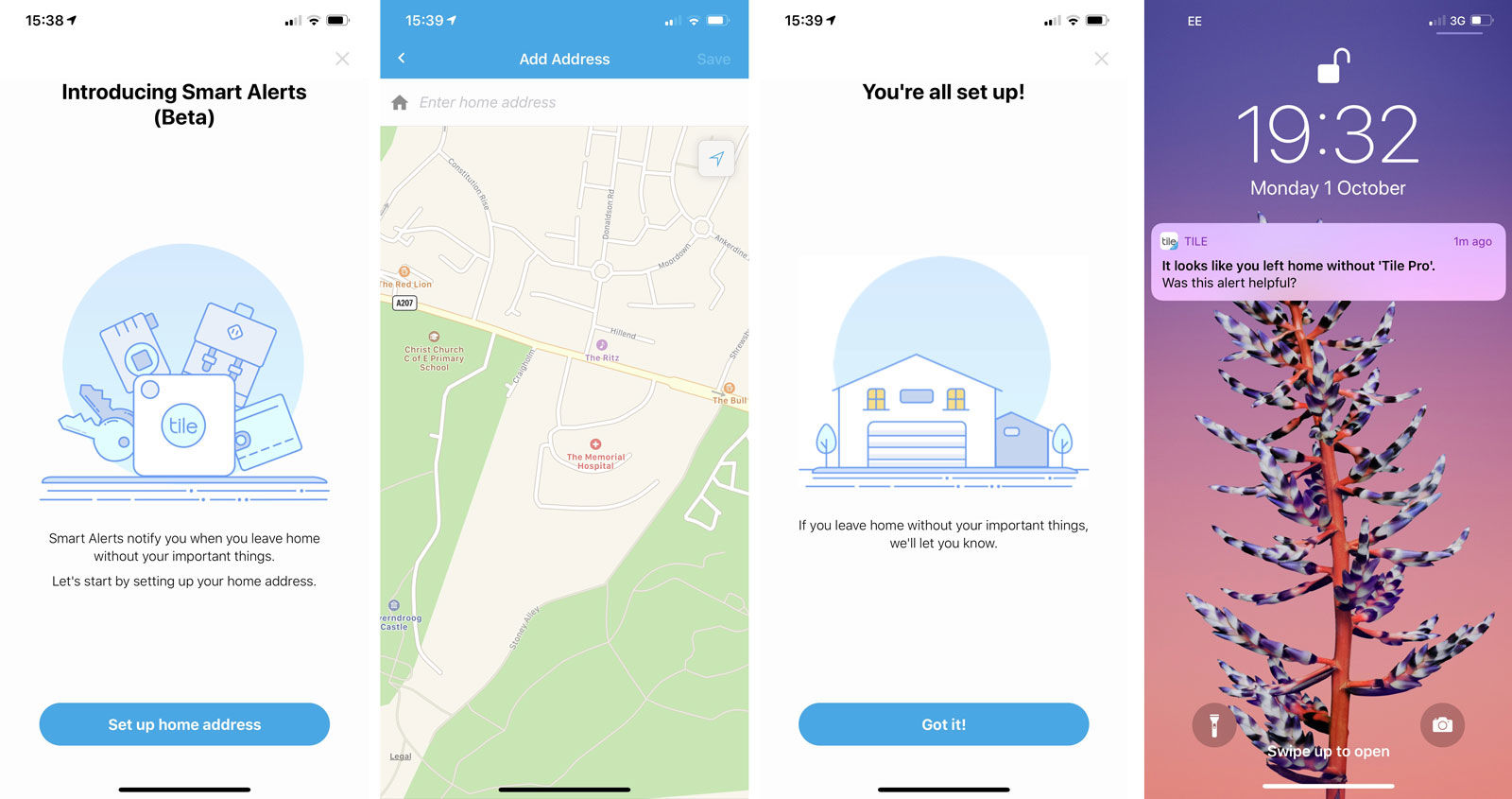 We’ve had the Tile Pro for a few short days, so consider this review our initial impressions: we’ll update it once we’ve been testing for a longer period.

Tile says it has rigorously tested the new design – specifically the battery door – so that it survives tumble tests, drop tests and squash tests.

Most other Bluetooth trackers we’ve tested with replaceable batteries have suffered from poor battery life, but Tile is well aware of this and says it is confident the new Mate and Pro will last a year just like their predecessors. Obviously we’ll have to wait to find out if this is true.

In terms of range, this is something that will vary depending on factors including the model of phone you use, obstacles (such as buildings and walls) and metallic objects.

In our own tests, which we consider to be real-world conditions rather than ‘green field’ testing, we found range was a little better than the previous Tile Pro. Once connected, it’s possible to walk at least 200 feet or more before losing that connection. However, you have to be much closer to re-establish the link – roughly 80 feet or so in our initial tests.

It’s important to note that you’ll need to be around that distance or closer to hear the ring: even with the louder speaker, it’s still drowned out by the ambient noise of traffic, wind and other real-world sounds much further than that.

And if the Tile is in a coat pocket, a bag or the holes are blocked by another object (as it tends to be in the real world), you’ll need to be closer still, or wait for the ambient noise to die down.