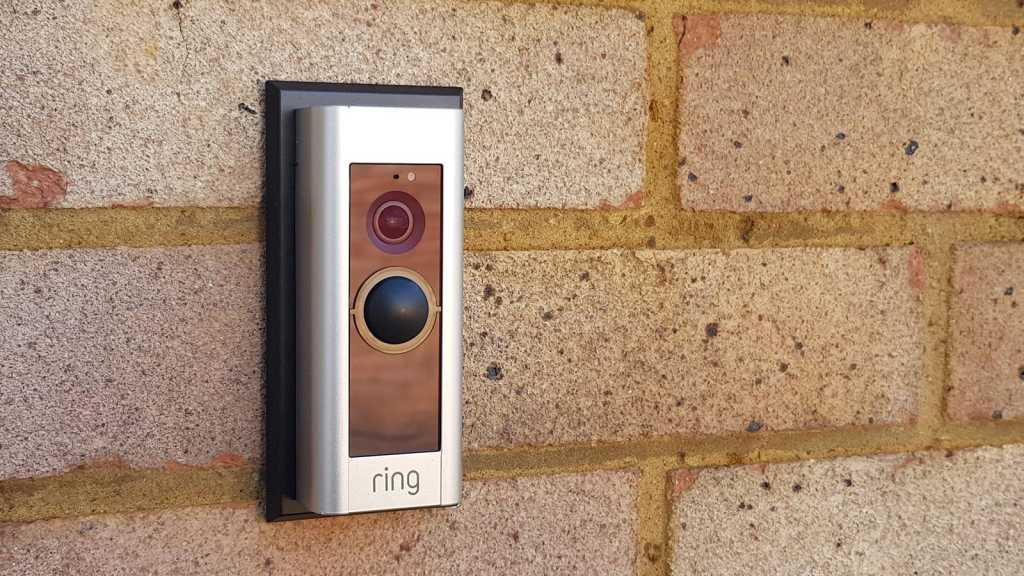 The Ring Pro offers crystal clear 1080p video recordings and hardly any false-positive notifications. We’d happily pay the extra money for the Ring Pro over the standard model for its custom motion zones and longer video recordings  but you will likely need to factor in the additional cost of professional installation.

Ring is one of the better-known contenders in the video doorbell market, though it now has some competition from the  Nest Hello. It lets you answer your doorbell and keep an eye on visitors (invited or otherwise) from wherever you are on a phone, tablet or laptop, with positive implications for both convenience and security.

Is the Pro worth the extra money?

We tried the Video Doorbell Pro as an upgrade to the original Ring video doorbell, and immediately noticed the improved video quality from 720p HD to 1080p Full-HD. The Video Doorbell 2 comes with two interchangeable face plates while this Pro has four – silver, bronze, black and what looks like a dirty white.

That’s not the only difference between this model and the cheaper versions. The Pro kit is supplied with the Ring Chime, which you might think you don’t need until you go out and the kids don’t hear the postman ringing the doorbell, or you’ve left your phone upstairs and miss the notification. And you may not notice it, but the Pro supports dual-band Wi-Fi, whereas the standard model is limited to 2.4GHz.

But the best new feature in the Pro is easily the customisable motion sensors. With the Doorbell 2 you select zones to monitor, and it requires a bit of trial and error as you try to work out exactly how those zones correlate with the area around your front door. With the Ring Video Doorbell Pro you can drag and drop points to select a precise area for motion detection using the camera view, and this makes configuration so much easier.

Ring has pretty much removed the possibility of false-positive alerts with the Pro. We found it would trigger a notification when our neighbour’s security light activated, but at all other times if it went off it meant someone or something was in the vicinity of the front door.

We also noted much longer record times – whereas our original Ring Video Doorbell would record a short 30-second clip, which often wasn’t quite long enough, the Pro will record around 1 minute 5 seconds. That recording also starts earlier – before the motion is visible in the video, which suggests it is recording constantly.

This is almost certainly why the Ring Pro runs from mains power, not batteries. If you want to run your doorbell off battery power you’ll need the original Video Doorbell or Video Doorbell 2.

Ring Video Doorbell Pro: Installation, set up and use

The Pro requires professional installation, so factor this into your budget. How much it costs depends on where you buy from, and ours was arranged via Argos for £100.

We *thought* the PR was being a little OTT when they insisted on this installation, since our existing Ring Doorbell was hardwired and we figured it would be a straight swap, but we’re glad they put their foot down. The Pro requires a 24V transformer, which is supplied in the box, but we wouldn’t have known what to do with it.

If you opt for the professional installation the engineer will do all the hard work for you, from affixing the Pro to the outside of your home (at 114.3×46.7×20.3mm it’s sleeker than the Video Doorbell 2, but still too bulky to go on the door frame) to connecting it to your home network, helping you set up the mobile app and configuring the device to work how you want it.

Our engineer swapped over the doorbells and then waited for the Pro to recharge its battery before he was able to continue. This took nearly an hour, but he assured us that in all the installations he had done this had happened only once before and the process is usually complete in a few minutes. He suggested our sample may have been sitting in an office for a while, and if I had bought it from somewhere like Amazon the battery would likely be more fully charged.

No matter, he was a friendly chap and the weather was nice. We used the time to speak about the differences between Nest and Ring, with the Hello also offering facial recognition and full integration with Google Home. We’re a little bit jealous, but we can’t fault the performance of the Ring Pro, which does work with IFTTT and Amazon Alexa and some integration with Google Home.

With either service you’ll find storing recordings in the cloud is not free, and with Ring you’ll need to pay an additional £2.49 / $3 per month or £25 / $36 per year if you want to take advantage of this following the 30-day free trial. Of course, this is nothing new in today’s cloud-connected security cameras. 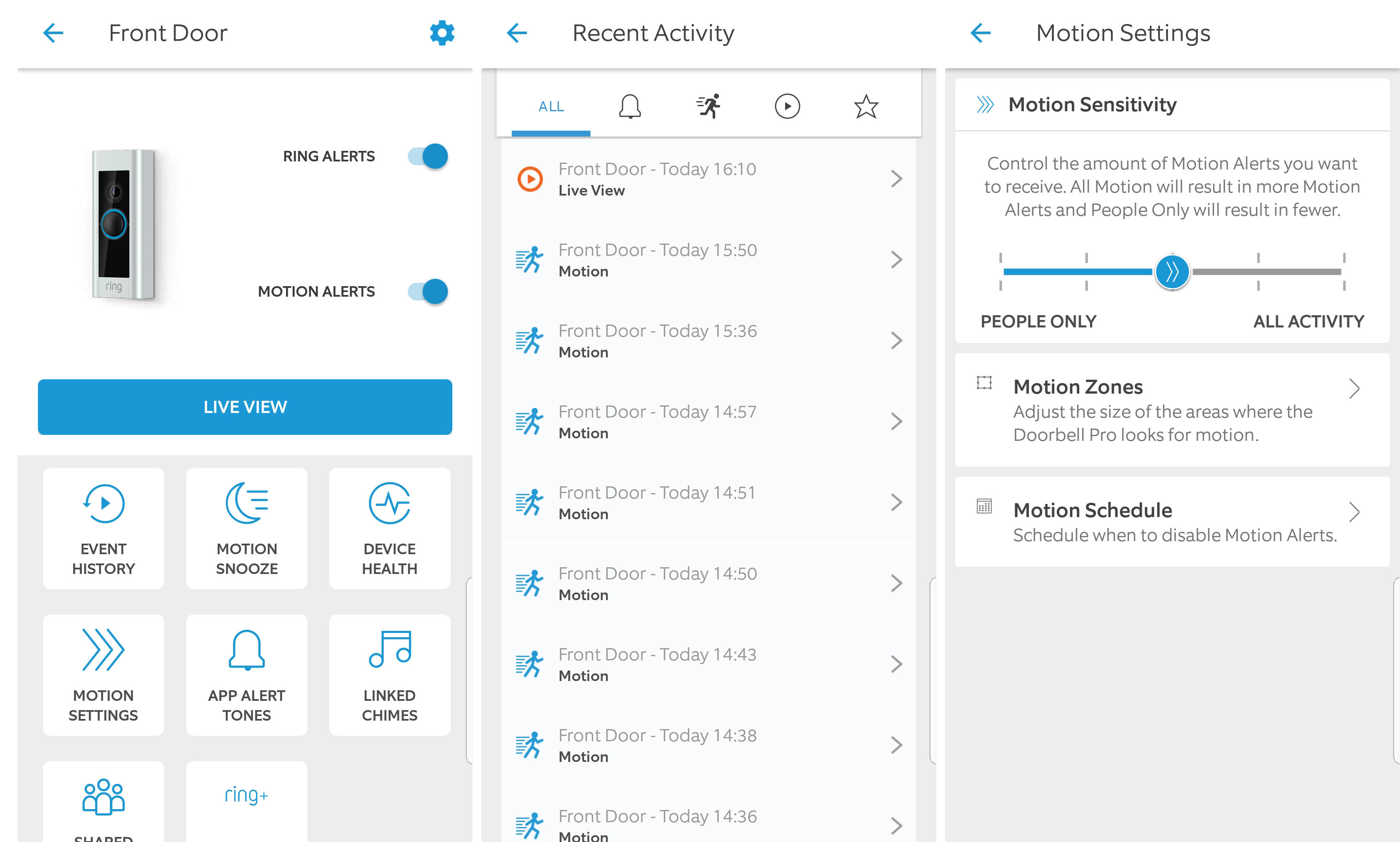 When the Ring Pro was finally ready to go we were able to get into its configuration in the app. At first glance it looked exactly the same as we’d seen with the original Ring Doorbell, but gone is the bit that shows you how much battery remains. You can still individually control rings and motion, and you can view the feed from previous events or a live view.

There’s an option to add Shared users, which lets you add other members of your household. They get a slightly stripped back view, so aren’t able to mess around with all the features the main account holder has access to: a good thing.

Dig into Motion Settings and you’ll find you can control the sensitivity so that the doorbell picks up only people or all activity, with ours set roughly in the middle. Motion Zones is the aforementioned ability to draw points on screen and select the exact area you want to cover, while Motion Schedules lets you disable Motion Alerts during certain periods, which is very handy when your neighbours are having new carpets fitted.

With the key settings managed it’s a case of set and forget. If you’re away from home and the doorbell rings you’ll get a notification on your phone. Tap this to answer the call and you’ll find two-way audio with crystal clear reception and a sharp video recording with 160-degree view. This is the case even at night, with infrared sensors offering full night vision.

As with all the video doorbells in its range, the Pro is fully specced up for a life outdoors, weather resistant and able to withstand temperatures between -20 and 50°C. There’s a two-year warranty, and should anyone pinch it from your doorstep you’ll not only catch them doing so on camera but Ring will replace the device for free.

Read next: Pair this with the Ring Floodlight Cam