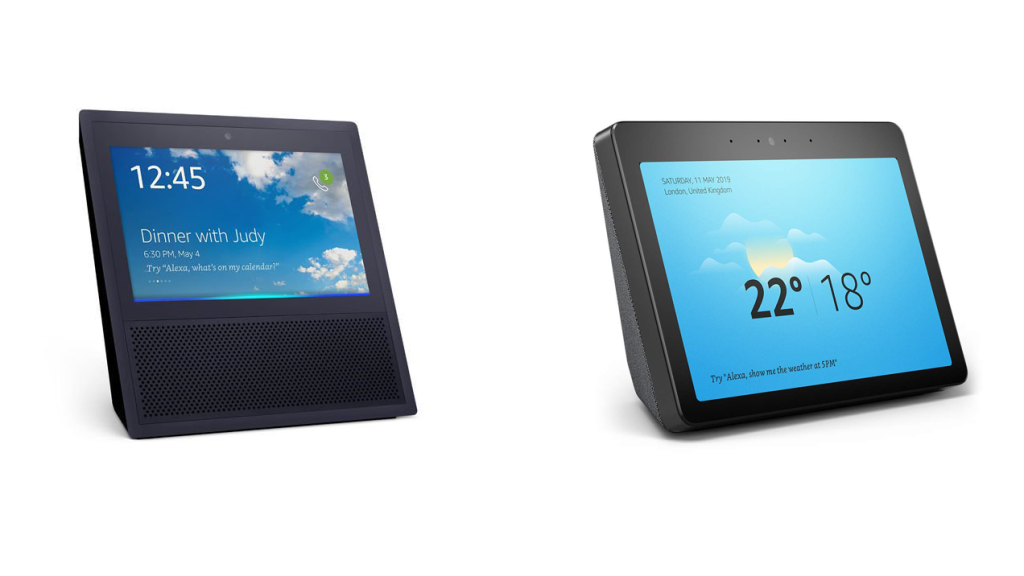 If you want a media content device in your kitchen, with the advantages of voice control, integration with Amazon services, and a modicum of Smart Home control, then the new Echo Show is a compelling device. Upgrading the display is a big step forward, as is the improved audio performance, all of which makes the new model superior to what came before. That being said, the core functions remain the same, so if the older model sees significant reductions in price then it could be a decent bargain. For us though, Amazon’s 2018 model is the one you should buy, as the nature of the device means you probably won’t be upgrading it for a few years, and its display will age much better than the 2017 panel.

For Amazon’s 2018 hardware lineup there are refreshed designs for the Echo Dot, Echo Plus, and the introduction of a new Echo Sub which brings much-needed bass to the Echo and Echo Plus. One of the most interesting updates was to the Echo Show, which received a bigger screen and various other improvements.

So, will the Echo Show (2018) prove an instant success, or should you be hunting down its cheaper predecessor instead? We compare the two.

The new version of the Echo Show will be available to buy from Amazon on 11 October. It sees a slight price increase over the older model, with £199/US$199 giving way to the more expensive £219/$229.

Amazon has stopped selling the previous version, as it gears up for the imminent release of its replacement, but at the time of writing the device is still available from outlets such as Argos and Currys in the UK for around £199, while in the United States Best Buy has the Show for $129.99 as long as stocks last.

The original Echo Show wasn’t exactly a device we’d describe as having a pleasing aesthetic. The 7in display sat atop twin front-facing 2in speakers, all of which were encased in a grey plastic shell. It was perfunctory, but far from desirable.

2018 brings a new approach, with a fabric covering for the case which looks very similar to those found on the Google Home and Apple HomePod speakers.

Gone is the stacked construction, with the front panel now entirely taken up by the larger 10in display, while the dual 2in speakers have been moved into the main body to produce sound from the sides while a bass radiator handles the lower frequencies.

Both devices have 5Mp cameras for the video calling feature, and while the Alexa voice interface is the main intended way to interact with the Show there are still volume and mute buttons along the top edges of either version.

These may look like tablets with built-in stands but there is one significant difference, in that they need mains power to run. So, it’s best to decide where you want to the Show to live and then set it up with a sense of permanence. Amazon markets the device as clearly intended for the kitchen, as it does seem a sensible setting for its various functions.

One of the main complaints about the first-generation Echo Show was the low-resolution display. For a device whose main selling point was the inclusion of visuals, the 1024×600 offering seemed half-baked.

Amazon has addressed that with the 2018 model, which features not only a move from 7in to 10in, but also an upgrade to full HD.

The speakers have also seen a boost, with the bass in the new model easily eclipsing the weedier efforts of 2017.

Not much in terms of core hardware has really changed, as an Intel Atom X5-Z8350 processor is still found at the heart of the Show, AD2P Bluetooth connectivity is standard, but the 2018 edition does appear to have upgraded the WiFi support to include MIMO across 802.11a/b/g/n/c.

Amazon installs eight microphones in its Show devices, which work with Far Field audio capture to discern your voice over the sound of bubbling pots, hissing frying pans, and any content you might be enjoying on the Show itself.

In practice it works well, and means you can issue voice commands rather than have to touch the screen if your fingers are covered in dough or other cooking related materials.

Here’s a breakdown of the main specifications for both devices;

Alexa is at the heart of the Echo Show, bringing with it all the benefits of the digital assistant that have made the other Echo products such a huge success for Amazon.

Using voice commands you can have the Echo Show play music from Amazon Music, Spotify, or audiobooks from Audible. TV shows and movies can also be summoned from Amazon Prime Video. Of course, all of these require subscriptions to the relevant service.

You can have the Show update you on the day’s news, display recipes on the screen, or make free video calls to other Echo Show users. There’s also a potentially useful feature, especially if your kitchen window doesn’t have a view to the front of your home, as the Echo Show can display the feed from a video doorbell. It can also control the lighting in your home of you use Phillips Hue bulbs.

The touchscreen interface is a variant of Amazon’s FireOS, as found on the Fire Tablets, and does its job without fuss.

What about the new Show Mode Dock for Fire Tablets?

Right, good question. It is well worth noting that Amazon is about to launch the Show Mode Dock for both the Fire HD8 and HD10 tablets. This turns them into an Echo Show, sort of. You get the big screen, but not the great sound as you’re still stuck with the tablets’ built-in speakers.

If you’re in the US, they’re already on sale.