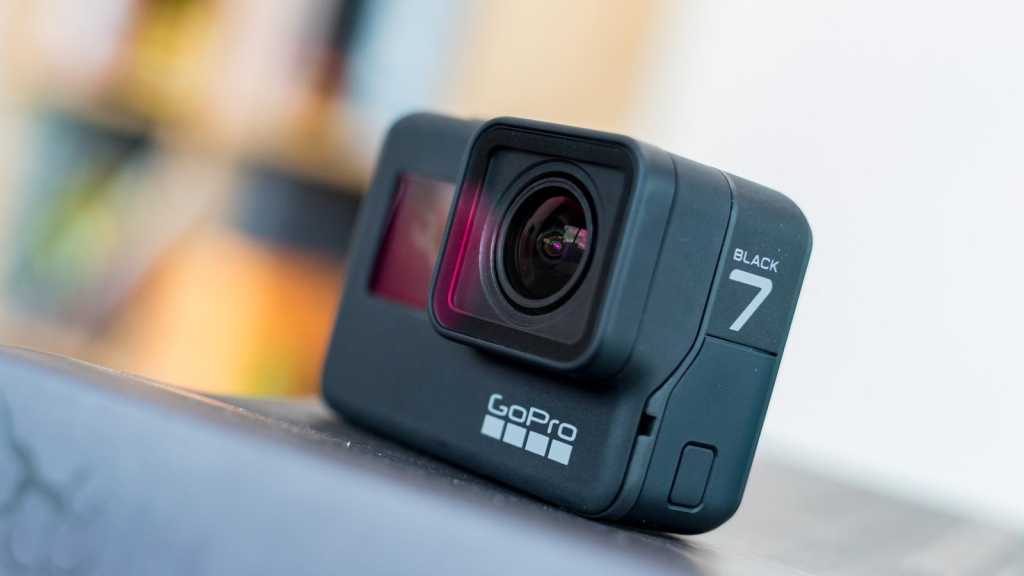 So the GoPro Hero 7 Black isn’t hugely different from the last model. In fact, when it comes to design and core specs, it’s pretty much the same. The new features are on the inside and within the software. Namely HyperSmooth brings excellent stabilisation that will be a real boon for anyone using the camera in situations where a gimbal isn’t an option. Live streaming will also be a sought after feature for many users and the other new things like TimeWarp and a new UI are all welcome, too. Whether you should upgrade to this model depends where you’re coming from and how much you will benefit from the new features. What we can say, is that this is one amazing action camera that’s difficult to beat – at a new lower price in the UK.

The GoPro Hero 7 Black is here and it might not look any different to last year’s premium action camera, but it’s got plenty of new tech hidden beneath the service. In our full review, we test new features including HyperSmooth and Live Streaming.

GoPro is in touch with its customers more than most companies, and the biggest request for this new camera was gimbal-like stabilisation. So a Karma Grip built-in, but is that even possible?

A new model in the tech world often means a higher price, but GoPro has kept the cost of the Hero 7 Black down.

You can also check out DJI’s cheaper rival in the Osmo Action.

The range is available to  order now. Check out which is the best GoPro to buy.

It’s no real surprise that the design and build of the Hero 7 is essentially identical to the previous models.

Really, though, this is a good thing as you’ll feel instantly at home using the new model and it will fit in all your existing mounts and the like.

As you would expect, the camera is rugged and durable including waterproofing up to 10m without an added case. You get a 2in touchscreen on the back and a small monochrome display on the front to give you basic details like battery level, settings and time remaining.

We’re providing these details just in case this is your first GoPro. Now we move onto the real meat of the review, looking at the new features of the Hero 7 Black.

Ironically, the Hero 7 Black is available (from 2 March)  in a new Dusk White edition, should that go with your outfit or gear or shooting location better. It’s the same price as the regular black model and there’s also a new accessory made in collaboration with MotoGP rider Valentino Rossi. It’s a £19.99 neon yellow sleeve and lanyard emblazoned with Rossi’s iconic 46 number. 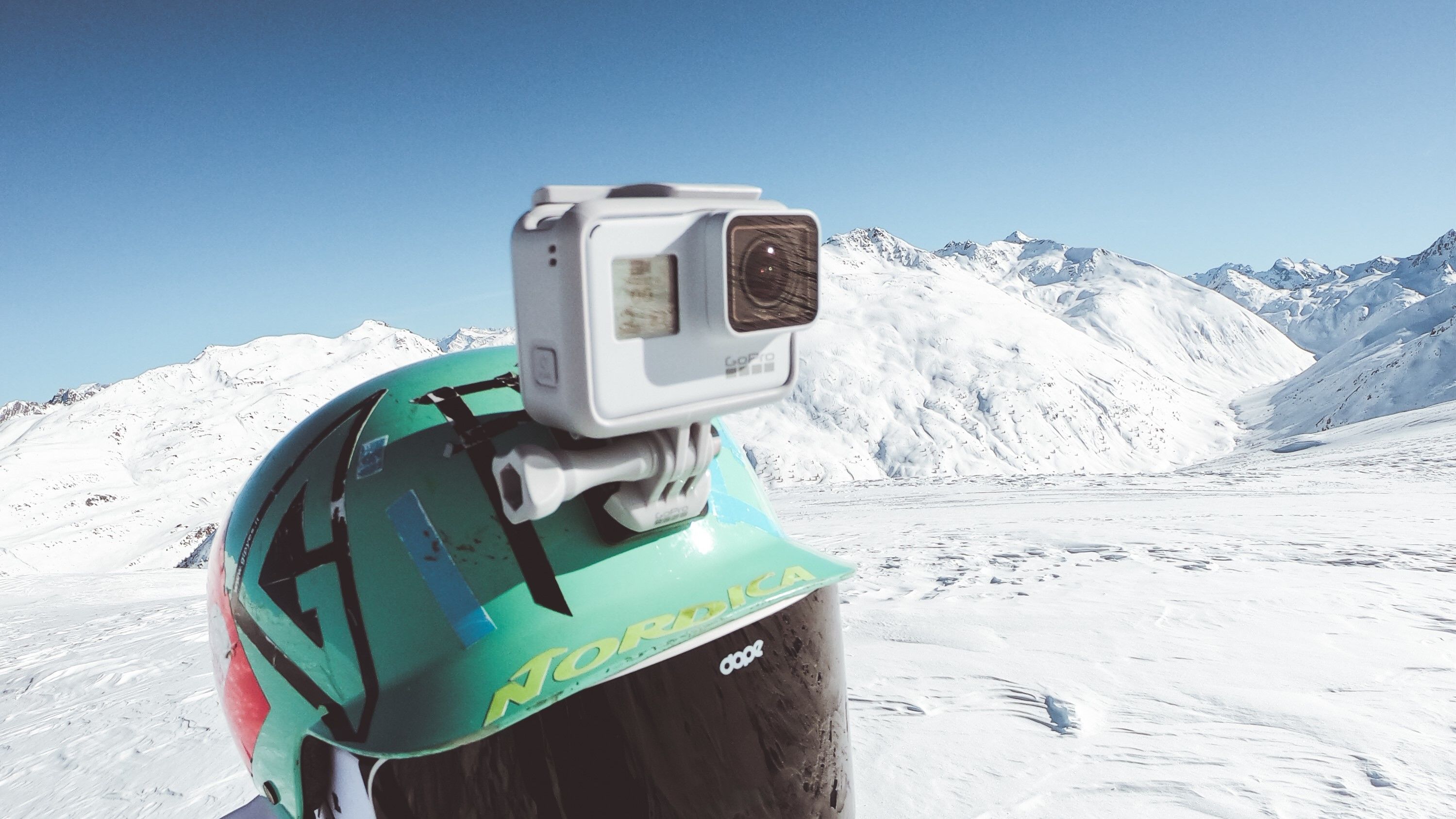 Not only is the design of the Hero 7 Black the same as its predecessor, the specs are pretty much the same as well. So the headline details for the sensor and lens so it’s still 12Mp and shoots up to 4K resolution at 60fps.

So let’s dive into the new features on the Hero 7 Black.

As we mentioned earlier, GoPro customers top request for a new camera was gimbal-like stabilisation. Although the firm said this was incredibly difficult to built into the device, it thinks that it has managed to pull it off.

The result is HyperSmooth and is a combination of hardware and software algorithms we’re told. It’s not optical image stabilisation as you might expect. It crops roughly five percent of your video. 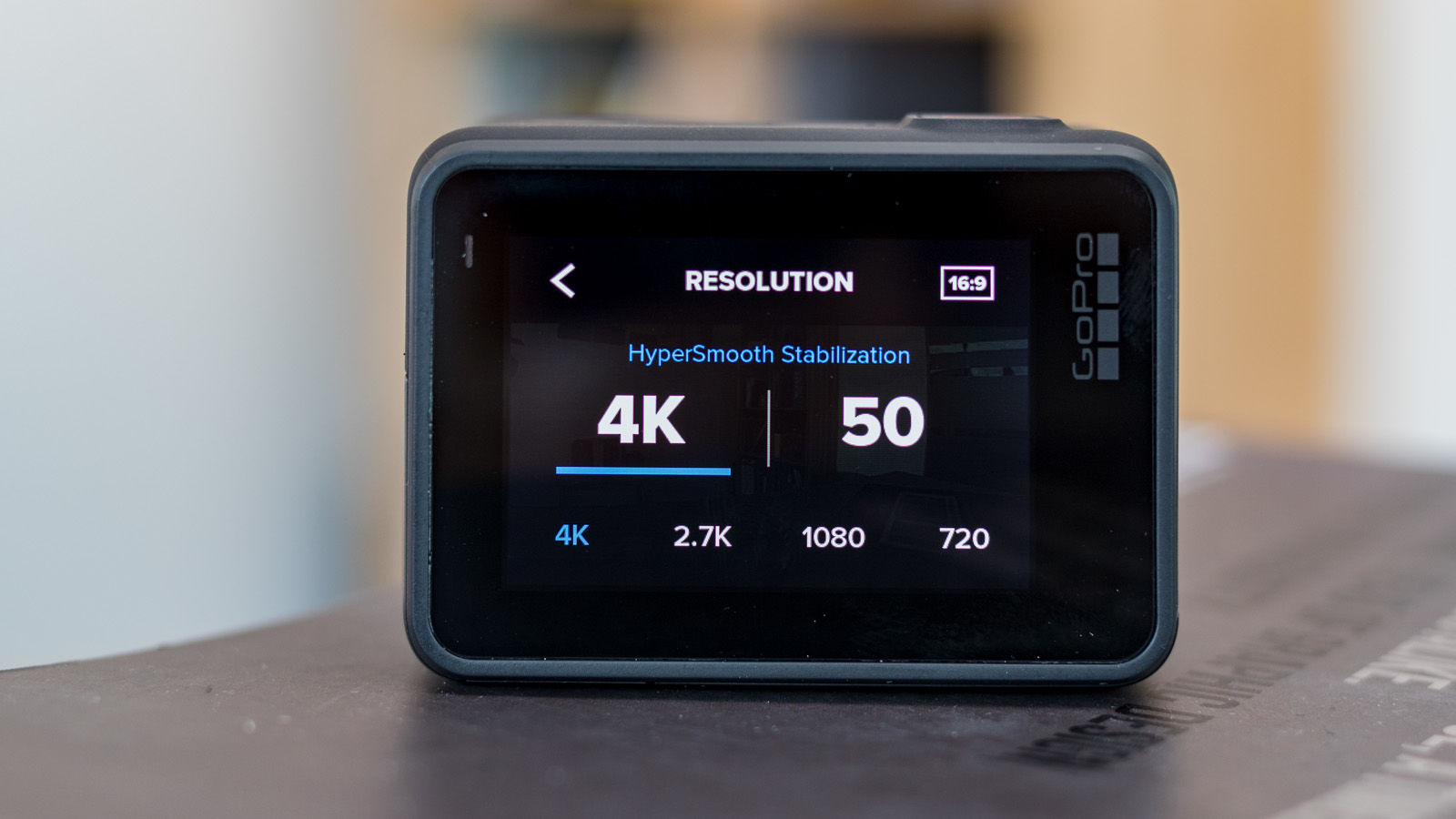 HyperSmooth works in most video resolutions and framerates, you just won’t get it at 1080p or 2.7k once you get to 120fps. Shooting at 60fps in any resolution is fine and should be enough for most users. The image above shows 50fps as the camera was set to PAL.

The big question is whether it works and in a nutshell, yes. When you compare the results of HyperSmooth to regular stabilisation, it’s glaringly obvious which one is which.

It’s not quite the level of a Karma Grip, but it’s built-into the camera and therefore included in the price making it a pretty sweet deal – the gimbal is £299/$299 alone.

Let’s not forget, there are plenty of situations when you can’t opt to use a gimbal – underwater and mounted to a bike or other sports equipment to name just two.

So for all of these times, HyperSmooth is going to be a real boon and a big jump up for the final quality of videos.

It might sound like some distorted video feature or some kind of time travel, but TimeWarp is what you get if you combine time lapse video with HyperSmooth stabilisation.

GoPro describes it as a ‘magic-carpet-ride’ and that’s a pretty good way of putting it. You can select various speeds between 2x and 30x depending on how long your video is.

It’s cool but clearly not the headline feature here. 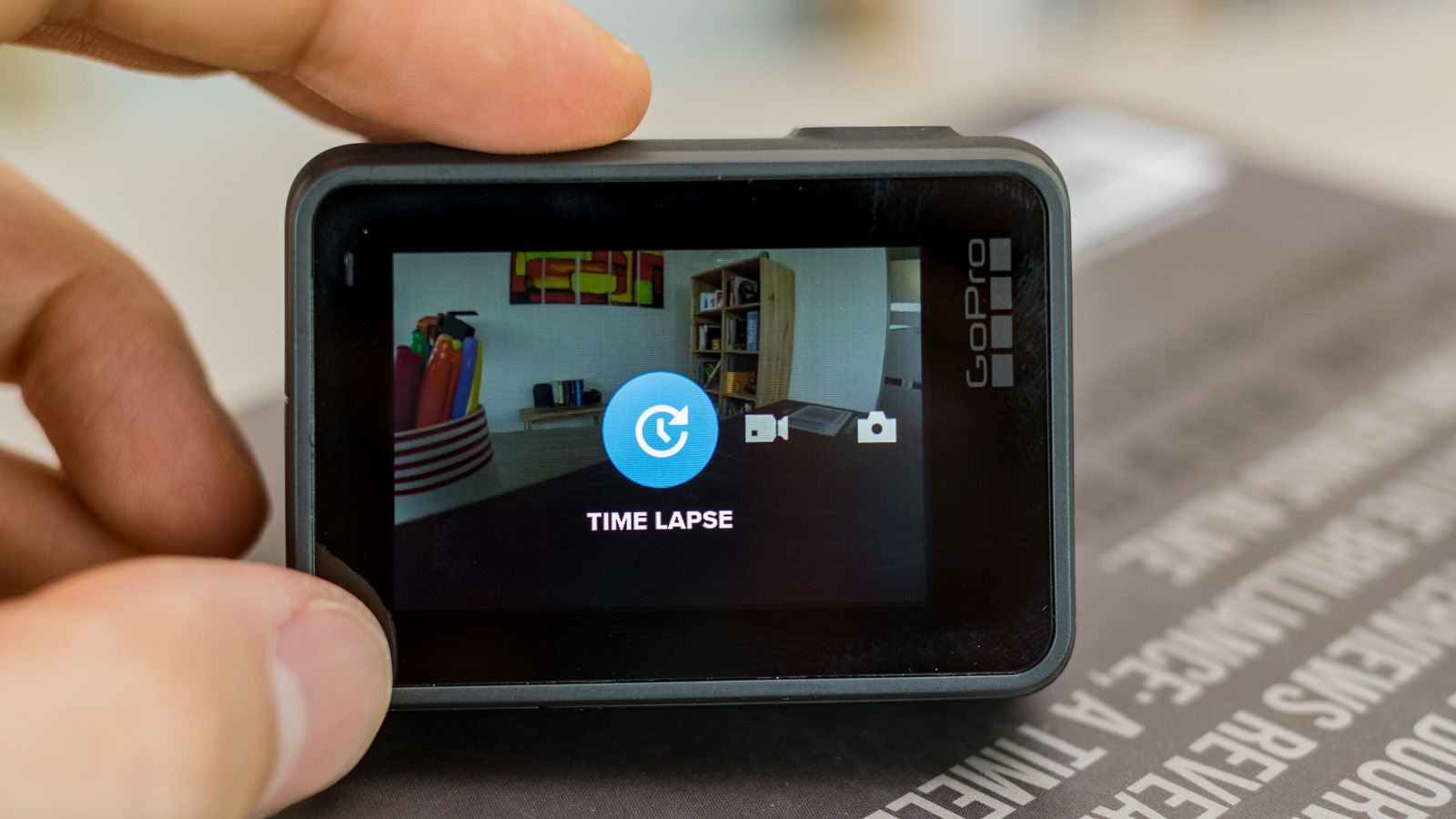 For the first time ever, you can live stream directly from a GoPro. This is a feature we’re sure many of you have been longing after.

It’s all pretty easy, too. You’ll just need to connect the camera up to your phone and select the Live Stream mode. Then just log into the platform you want to stream from (we’ve only been able to test Facebook but others will arrive over time) and the network, including the option to hotspot to your phone to use its data.

The main drawback is that you can only stream up to 720p but it’s not the end of the world. If you have a really weak connection then you can also select 480p. In our tests the stream was around 10 seconds behind, so it’s not exactly live but this is broadly the case for any live streaming in general so nothing to worry about.

With the new cameras comes a new user interface which is simplified and is easy to use once you’ve spent a short while getting used to it. A couple of interesting features are the ability to touch to zoom and now the interface works in portrait mode.

You’ll find Short Clips within the video mode which lets you restrict the length of the recording to 15- or 30 seconds. Should you want to stop your kids eating up all the storage space or make sure the clip is a suitable length for uploading to some social media platforms. 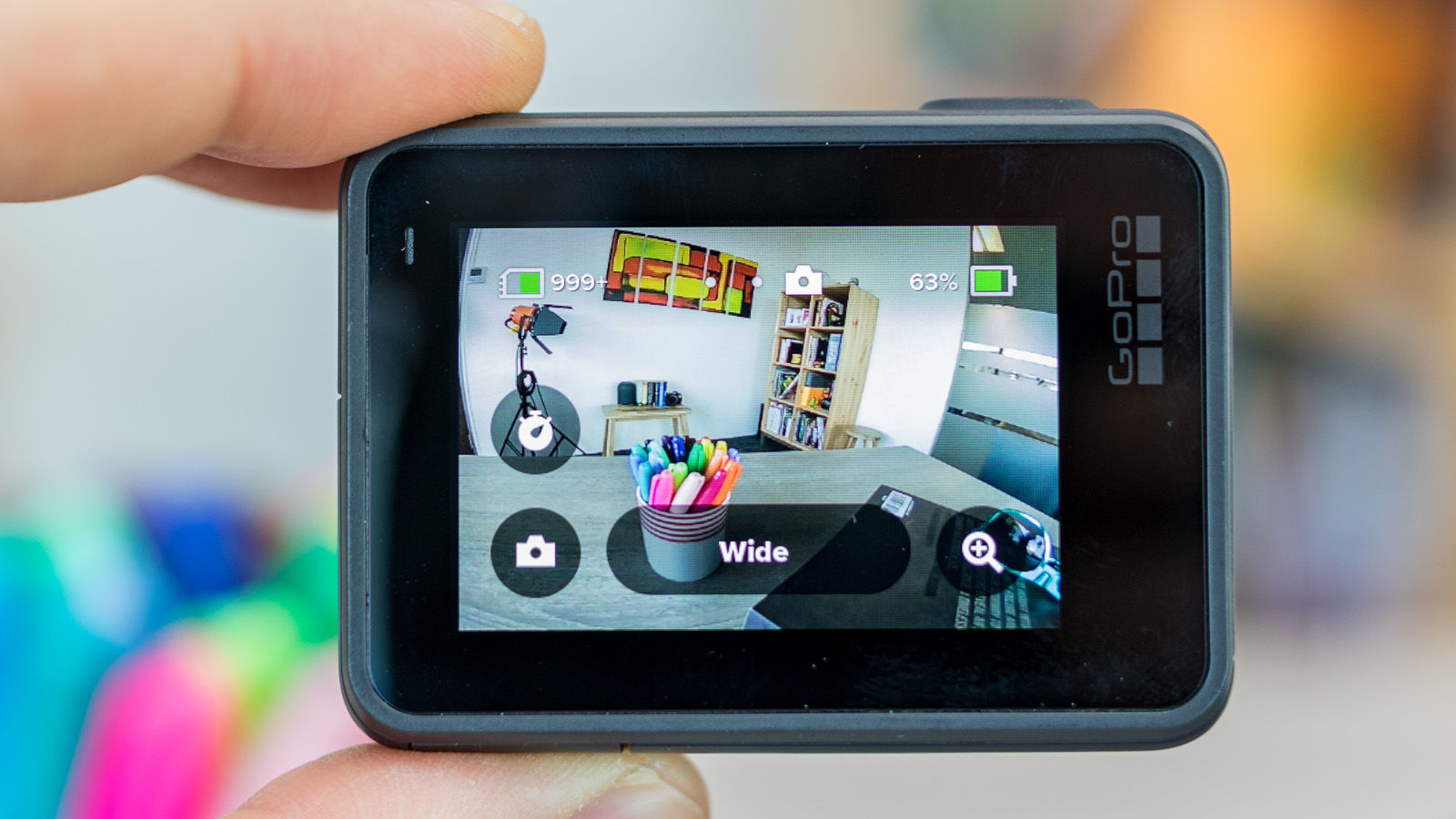 When viewing footage on the camera itself, you can now scrub through and highlight particular moments.

Like before you can use your voice to control the camera, should it be mounted somewhere awkward and you’re unable to use the buttons.

We’ve been testing the camera on beta software so it’s been occasionally laggy, but that shouldn’t be an issue with the final version.