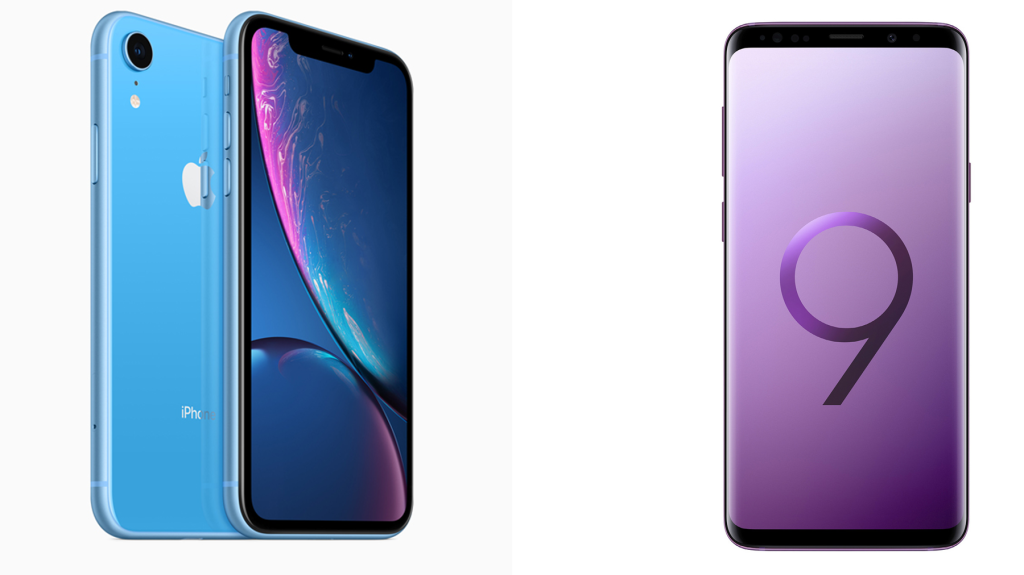 Due to its price, the iPhone XR is sure to be a common sight on city streets when it launches in October. The smart new colours, powerful processor, and iPhone X-style display make it a tempting combination if an iPhone is your weapon of choice. For us, the Samsung Galaxy S9 remains the better option, thanks to its Super AMOLED display, expandable storage, and variable-aperture camera. Then there’s the fact that it’s been out for six months, so you’re bound to find it even cheaper than the prices listed above. The iPhone XR is very nice, but the Galaxy S9 is the better deal.

Among the new line-up of Apple smartphones unveiled recently was a lower cost alternative to the iPhone XS and iPhone XS Max. Featuring many of the same components, the iPhone XR is around the same price as Samsung’s excellent Galaxy S9. We compare the two to see what £750 buys you these days.

The new iPhone XR was made available to pre-order from Apple on 19 October, with a release date of 26 October.

There selection of colours available is bigger than usual, including (Product) Red, Yellow, White, Coral, Black, and Blue. These all come in three storage capacities, which cost as follows;

Samsung launched the Galaxy S9 in March 2018 and it’s available now on pretty much every carrier.

The device comes in three colours – Midnight Black, Lilac Purple, and Coral Blue – all of which are available in a 64GB storage capacity, costing £739/$619.99. Storage can be expanded via the microSD slot which supports cards up to 400GB in size.

The iPhone XR shares many of the design cues introduced in the iPhone X. These include the almost bezel-free screen, replete with a notch that houses the Face ID cameras and removes the need for a Home button and fingerprint scanner.

An aluminium frame skirts the glass, adorned with the range of colours mentioned above, and a glass back makes wireless charging possible. The solitary rear camera is a departure from the dual-lenses found on the more expensive models, and the XR sits between the iPhone XS and XS Max in terms of size and weight.

Samsung’s Galaxy S9 is a svelte creation, being shorter, thinner, and lighter than the iPhone XR. Again, the front panel is mainly free from anything that would interrupt the expanse of glass. Only thin bars at the top and bottom blot the landscape, while the curved Infinity display makes the side-bezels practically non-existent.

The metal chassis is home to the usual compliment of buttons and speakers, plus there’s a standard headphone jack. Glory be!

Wireless charging is present, as is a fingerprint sensor that sits neatly beneath the single rear camera unit. Both devices are waterproof, but the S9’s IP68 rating bests the less impressive IP67 attained by the iPhone.

Here is a breakdown of the main specifications for both devices:

Apple’s new A12 Bionic processor is at the heart of the XR, just as it is on the iPhone XS and XS Max, bringing with it improvements in both speed and energy efficiency over the previous A11 Bionic, which was already a thoroughbred.

Samsung employs two different processors, dependent on where you are in the world. North American customers will find the latest Qualcomm Snapdragon 845 in their devices, while Europeans are bestowed with Samsung’s own Exynos 9810. Both are premium chips, and deliver consistently fast performance.

The large 6.1in display is an LCD panel rather than the OLED ones found on the XS and XS Max. While Apple always does a good job with these displays, the XR doesn’t quite match the vibrancy of the Super AMOLED Quad HD+ panel in the Galaxy S9.

Cameras remain one of the most important features on a modern smartphone, and the 12Mp dual-aperture lens on the S9 is excellent. Mechanically able to switch between two f-stops, means that the f/1.5 setting can be used to capture impressive low-light images, then changed to the f/2.4 for brighter scenes.

Apple is always confident in its cameras, and although the iPhone XR doesn’t boast similar trickery to the S9, the new A12 Bionic chip and slightly larger sensor are being touted as the reason for a software breakthrough in smartphone photography.

The iPhone XR has Smart HDR, which shoots 9 exposures almost simultaneously, then applies local tone mapping and several other clever tricks that help images look their best. We’ve yet to fully put it through its paces, but we’ve high hopes for the photos and videos from this device. Keep an eye out for our in-depth review to see how it fares.