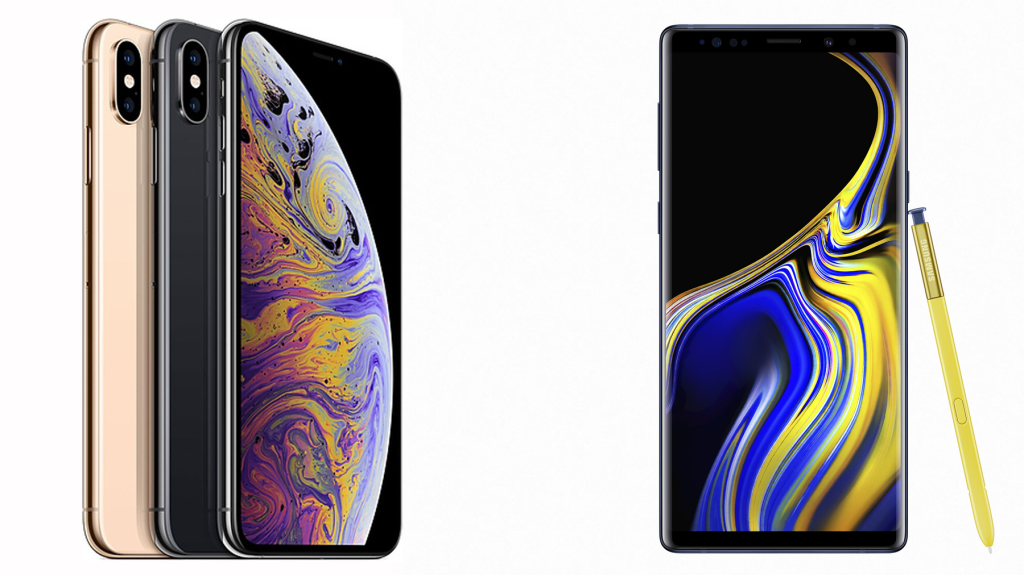 With its huge screen and iPhone X styling, the new iPhone XS Max brings a good deal to the table. Apple’s A12 Bionic chip could be the jewel in the crown, so long as it delivers on its promise, and the cameras will push the already excellent shooters found on the Note. That being said, the Galaxy Note 9 seems to offer more in terms of features and capabilities at this price point. The expandable storage means you can save a huge amount of money compared to the iPhone, while the S-Pen remains a significant differentiator.  Both require real financial commitment to purchase, so be sure to spend as much time as you can with one in a store before pulling the trigger. For us, the Note 9 shades it, but if iOS is your platform of choice then the XS Max is arguably its finest stage.

Samsung started the large phone craze when it released the first Note device back in 2011. Since then every other manufacturer has followed suit, with even Apple subsequently offering Plus-sized models.

Now, the Californian giant has introduced a new device that boasts the biggest display ever to grace its smartphone range. So, does the iPhone XS Max have enough to tempt phablet fans from the charms of the excellent Samsung Galaxy Note 9? We compare the two.

There’s no easy way to break this, but if your heart is set on one of these two devices then you’re about to get significantly poorer.

It should be noted that both handsets support microSD cards up to 512GB, which makes it possible to actually carry 1TB of storage on a phone. A PHONE!

Check out our Samsung Galaxy Note 9 deals to see what’s currently on offer.

Apple announced the iPhone XS Max at its annual event in September, and as of 21 September the new iPhone is officially on sale.

Prices are as follows:

The latter is the most expensive standard model we’ve ever seen, making it £350/$200 more expensive than its Samsung equivalent.

While the iPhone XS Max is new, the design is almost identical to last year’s iPhone X, albeit with a slightly larger frame.

Metal chassis adorn both, with barely a bezel in sight thanks to the absence of Home buttons on the front. Samsung has moved the fingerprint sensor to the rear instead, while Apple has dispensed with it entirely and relies on the Face ID cameras situated in the now notorious notch at the top of the display.

Surprisingly, for the first time the iPhone actually comes with a larger screen than the Note, with Apple fitting a 6.5in Super Retina OLED panel that just eclipses the 6.4in Super AMOLED one in the Samsung.

On the reverse of each device you’ll find dual-camera units, more of which we’ll get to shortly.

As you’d expect, there are the usual compliment of buttons on the sides, stereo speakers, lightning (iPhone) or USB-C (Note) charging ports, while the Samsung model boasts that fan favourite, the 3.5mm headphone jack. God bless you, Note 9.

Finally, both devices are waterproof, with iP68 ratings meaning they should survive accidental dips in the bath or any spilled drinks disasters.

Internally, the iPhone XS Max is again very similar to the iPhone X (whose review you can read here). The main upgrade is the A12 Bionic chip that brings small performance increases and better energy efficiency.

4GB of RAM is standard, which might sound low compared to the 6GB or 8GB found in the Note 9, but iOS has always had very good memory management capabilities.

Samsung fits its flagship with a Qualcomm Snapdragon 845 in the USA models, while UK buyers will find a bespoke Exynos 9810 at the heart of their units. Both are top tier processors, delivering slick, powerful, and responsive performance.

One area where Apple stresses the advantage of the new A12 Bionic is in its Neural Engine. This, aligned with a larger sensor, means that the iPhone XS Max now has a more intelligent camera system that can discern scenes with more acuity. It also offers the ability to alter the background focus of an image even after it’s been taken.

To capture these images the iPhone comes with the same dual lineup of optics found on last year’s model, namely a wide-angle 12mp f/1.8 and a telephoto f/2.4 lens.

The Note 9 also boasts dual 12mp-shooters, but with a bit of a difference. The secondary unit is an f/2.4 lens used for depth sensing and optical zoom, while the primary lens has a variable aperture that switches mechanically between f/1.5 and f/2.4.

This gives photographers the ability to move from well-lit areas to low lighting, using the one lens, while the other can still provide additional coverage.

The Note range is already famed for its excellent cameras, and the addition of the variable aperture only adds to the quality. Of course, iPhones are also some of the best picture-taking devices around, so expect the new technology to keep pushing the visual envelope.

As of yet, we haven’t had enough time to spend with the iPhone XS Max, so we’ll reserve judgement on the photographic capabilities, but it’s a safe bet that either of these units will produce highly impressive results.

Both the Note 9 and iPhone XS Max offer facial recognition as a method for unlocking the handsets, but Apple has paid far more attention to this area. The proof of this is that the iPhone has no fingerprint sensor, while the one on the Note 9 remains most users’ preferred route into the device.

Face ID relies on a collection of cameras on the front of the device, housed in the now notorious ‘notch’, and so far has proven to be effective and fast.

Whether you want this to be your primary security feature is another question, so if you’d rather stick with your fingerprint then the Samsung is a fine alternative.

Probably the most distinguishing part of the Note range, and why it bears that name, is the S-Pen. This small but accurate stylus lives within the body of the device itself, allowing the user to pop it out when needed, then return it for safe keeping afterwards.

Samsung has tailored the software to automatically offer various options when the stylus is removed, including being able to capture parts of the screen, annotate content, or simple doodle.

The handy accessory also doubles as a way to interact with the interface, making resizing windows, and navigating menus far more accurate than it might be with stubby fingers.

If you don’t see the use in the S-Pen then you might as well opt for the Samsung S9 Plus or indeed the iPhone XS Max instead, but once you’ve fallen under its spell, it can be hard to go back to a standard smartphone.

There were rumours that Apple was going to include Apple Pencil support with the iPhone XS Max, but sadly this never appeared. Maybe next year.

Here’s a full breakdown of the specifications for both devices;

At the time of writing, Android 8.1 Oreo is the version running on the Note 9, but we expect this to be upgraded to the new Android 9 Pie before the end of 2018. Samsung’s TouchWiz interface, which once drew derision for its garish colours, is now a refined and thoroughly modern take on the Android platform, with useful features and a classy aesthetic.

iOS 12 is also a mature and dependable operating system that builds on the enviable tradition of its past. By now, most smartphone users – especially those considering spending upwards of £1000 on a new device – will be familiar with what either has to offer.

There’s little to separate the two in terms of capability these days, so at this point it really comes down to the services you use and the interface you prefer.