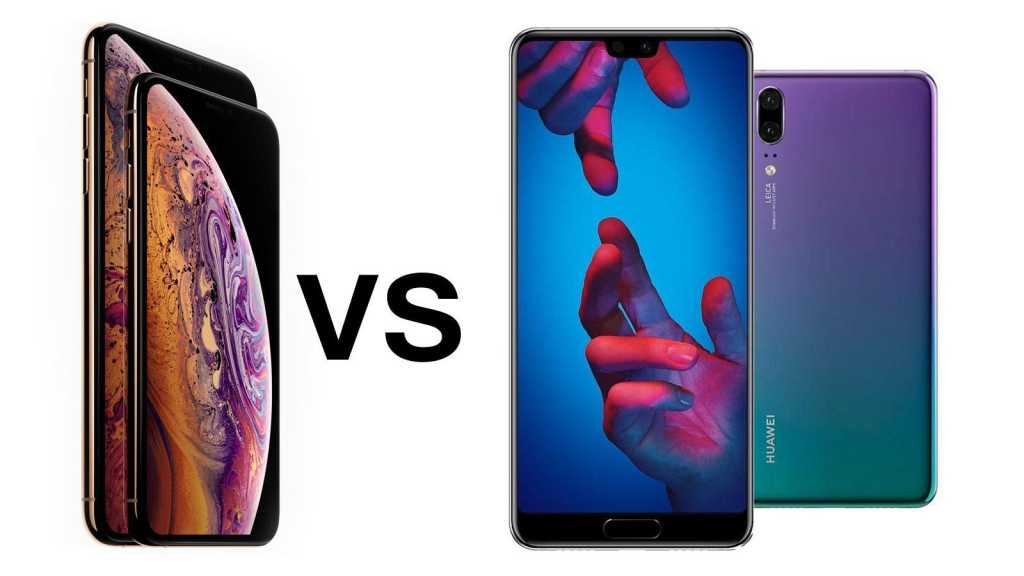 Unless you’re heart is set on iOS, then it’s hard to recommend spending the extra on either of the iPhone XS models. Broadly, the XS and XS Max have similar specs to the P20 Pro at much higher prices. Either way, you’re looking at large OLED screens with high-end internal specs. The iPhone does offer more storage if you need it and can afford it.

The P20 Pro, as we’re sure you well know, is Huawei’s current flagship with triple rear cameras and some useful AI for capturing amazing night photos. Here we compare it with the new iPhone XS and XS Max.

In this comparison review we’ll be looking at price, features and specs to help you decide which one to buy.

The Huawei P20 Pro isn’t exactly cheap at  £799, but no matter whether you’re buying SIM-free or on monthly contract, it still represents a good saving over both iPhones.

Both phones are among the most attractive around. This is – of course – entirely subjective though. Apple has added a new Gold colour option for the XS and XS Max. It isn’t new for an iPhone, but it wasn’t available on the iPhone X last year, so even if you opt for the one with the 5.8in screen, people will know you’ve got the 2018 Gold version is harder to find, but is just as distinctive as Twilight.

Notched screens are order of the day, as this allows for maximum display-to-body ratios. Apple’s screens have an even bezel around their perimeter but the Huawei has a thicker bottom bezel. However, unlike on many Android phones this is functional as there’s a slim fingerprint scanner there – ideal for anyone who doesn’t like a rear-mounted scanner.

The iPhones don’t have one, instead using FaceID for biometric authentication: they unlock when they recognise your face.

Water resistance is standard across the board: the iPhones have better protection than the iPhone X in 2017, with IP68 certification. The P20 Pro has the slightly lower IP67 rating, but all of these phones can be fully immersed in water for up to 30 minutes, so you can use them for some shallow underwater filming and photography.

We’ve yet to properly test the improved sound on the iPhone XS, but on the P20 Pro, it’s noticeably imbalanced as the bottom-firing speaker has a wider frequency range with more low tones.

Headphone jacks are absent here: audio is routed via the respective Lightning and USB-C ports or via Bluetooth if you want to go wireless. The iPhone has Bluetooth 5, and the P20 Pro Bluetooth 4.2.

Both phones are glass sandwiches, with a metal frame in the middle. It’s purely for show on the back of the P20 Pro though: there’s no support for wireless charging as there is on the iPhone XS and XS Max.

One key difference is that the P20 Pro is offered in just one capacity: 128GB. And unlike many Android phones, there’s no microSD card to expand this.

The iPhones come in 64GB, 256GB and – now – 512GB. If you’re a heavy user and love to have 50 apps at your disposal and keep lots of Netflix downloads as well as record lots of 4K video and take lots of photos then 64GB is unlikely to be enough for you, so consider the 256GB model the smallest capacity.

Battery life is one of the P20 Pro’s highlights. With a 4000mAh capacity, its battery can last for two days, possibly even longer if you’re using the phone lightly.

Apple has improved battery life compared to the iPhone X, but the XS runs for just 30 minutes longer; the XS Max 90 minutes longer. We need to test this for ourselves, but we’re expecting roughly a day to just over a day’s use from each phone.

Processing power is almost certainly a battle won by Apple here. The A12 Bionic is faster than the already fast A11 Bionic in the iPhone X and its Neural Engine is capable of 3 Trillion calculations per second – way more than the 600 Billion the A11 can handle.

Android runs as responsively as you’d expect on a flagship phone, but the chip runs out of puff when you ask it to stabilise video. In fact, you can only have stabilised video if you select 1080p at 30 frames per second: any higher and it’s greyed out.

The iPhone not only records 4K video at 60 frames per second (the P20 Pro is limited to 30 in 4K) but it also delivers what Apple is calling extended dynamic range as well as the cinematic stabilisation you might already be used to on previous iPhones.

Let’s talk cameras, then. The iPhone XS does little to improve on the iPhone X in terms of the camera hardware: look at the specs list and you’ll not spot many differences. Apple says the pixels on the wide-angle sensor are larger at 1.4um, but since it didn’t divulge the pixel size for the iPhone X’s camera, it’s impossible to know by how much. Some reports said it was 1.22um, but others said 1.4.

Anyway, getting bogged down in the technical details is to miss the big picture. A phone’s cameras are a combination of many things: lenses, colour filters, sensors, image processors and more.

Apple has always made these elements combine to deliver excellent photos and videos, time after time. It’s rare to end up with a blurry or bad photo on an iPhone but it still has its limitations.

Unlike Huawei, for example, there’s still no long-exposure night mode – despite that impressive Nerual Engine. There are a couple of new features though: adjustable depth of field (after taking a portrait photo) and Smart HDR.

Again, we need to test these out but we’ve no reason to doubt that they do improve upon the iPhone X’s photos.

The P20 Pro is – in many people’s view – the current benchmark for smartphone photography. Its main camera has a 40Mp sensor and it’s flanked by 8Mp telephoto and 20Mp monochrome cameras.

Photos, once you’ve disable the Master A.I. feature, are wonderful. They’re sharp, colourful and attractive. The portrait mode is also great, delivering great bokeh and generally managing to isolate the subject rather than making the wrong parts blurry.

And the 24Mp camera on the front takes great selfies, and some clever AI makes it possible to take portrait photos with just a single camera.

The night mode is nothing short of magic. It’s able to hold the shutter open for six seconds without letting shaky hands turn photos into a smeary mess. Take a photo in almost total darkness and the P20 Pro is able to produce an image that’s sharp and detailed compared to what you’d get from an iPhone.

Overall, it’s tough to pick a winner since both phones have different strengths and weaknesses. If video is your top priority, the iPhone edges it, but if photos are what you love, then the outstanding cameras (not to mention the great 3x and 5x zoom modes) make the P20 Pro the winner here.

Both Apple and Huawei use OLED displays which means high brightness and great colours. Apple’s screens can display HDR10 and Dolby Vision and support DCI-P3 as well. Look past the jargon and you’ll find some of the best OLED screens around, with surprisingly natural colours, not the overblown, vivid hues you usually see on an OLED screen.

The iPhones also benefit from 3D Touch and – more importantly – True Tone. The former lets you press hard on the screen to activate menus and other things, while True Tone means the screen displays accurate colours even when the ambient lighting around you changes.

Huawei’s display has a slightly lower resolution and doesn’t have a True Tone equivalent, but it’s still an excellent screen with high brightness and great contrast.

And here’s a full specs table so you can see how the phones stack up: