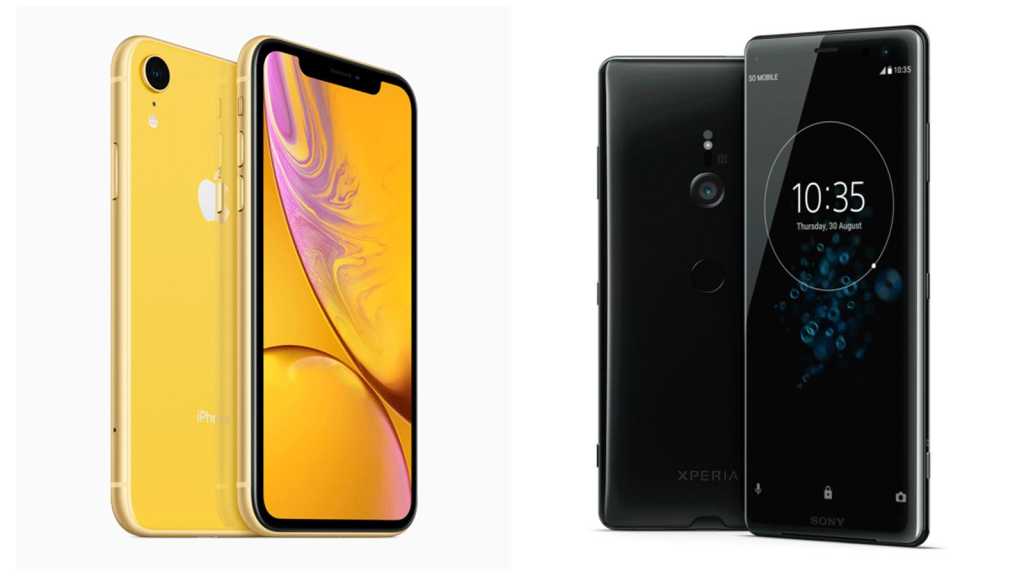 The choice between the similarly priced iPhone XR and Sony Xperia XZ3 could come down to whether you want to use iOS or Android. The XZ3 has a better screen but the XR comes in more colours and has an amazingly fast processor. If you want expandable storage then go for the Sony, if you want harmony with your iPad and Mac, go for the iPhone.  It might even come down to design – if you don’t want a notch then go for the XZ3. The iPhone XR gets you most of the high-end features of an iPhone for less money, but it’s still an Apple premium price. The XZ3 has more tech stuffed into it and has the better spec sheet, but you might simply want an iPhone.

Apple makes headlines every time it announces anything, hence the global hype for the iPhone XR. But Sony has been in the phone game for longer than Apple and knows a thing or two about how to make them, as shown by its Xperia XZ3.

The iPhone XR comes in a few eye-catching colours, as does the Xperia XZ3. They’re nearly the same price, too.

Here we take a look at the XR and the XZ3 to see which is worth your hard-earned money, comparing price, design, features and more.

The Xperia XZ3 will go on sale on 5 October from Sony and costs £699 in the UK, £50 less than the iPhone XR. It has 64GB expandable storage.

In the US, the XZ3 mystifyingly costs $900 and is available from Amazon.

Colour leads the way for these two smartphones. The iPhone XR comes in white, black, blue, yellow, coral and red. We like the yellow and coral versions and Apple has ensured that everyone will have a favourite with such a good range of options.

The XZ3’s colours aren’t as pop art but it’s still good to have a choice. It comes in white, black, forest green or Bordeaux red – the latter two are dark hues and very cool.

Despite being the cheapest iPhone announced in 2018 it is not the smallest, boasting a 6.1in display. It’s an odd but slim 19.5:9 aspect ratio. The XZ3 has a 6in 18:9 display, which is a more usual size for a tall smartphone screen.

Also, the iPhone XR has a notch, the XZ3 does not. This could swing it if you have a preference though we don’t see the notch as an issue – particularly because Face ID is so good.

The XZ3 has a curved glass back with camera and fingerprint sensor and means it rocks when you try to use it on a table. It also loves to slip off surface because of the design, though it sits nicely in the hand.

The iPhone XR’s glass back is flat save for the slight camera bump. It has an aluminium rim that makes it easier to grip than the XZ3, whose glossy metal rim is thin thanks to the curve of the display.

Both phones are large and generally two-handed phone for most takes. But then again, so are most phones these days. The iPhone is thinner and shorter than the Sony though, despite having a larger screen.

Here is a comparison of both phones’ headline specs:

There are plenty of differences here. If you dig expandable storage, super slo-mo video at 960fps, Bluetooth 5.0 with aptX and IP68 waterproofing then the Xperia XZ3 is for you.

But a lot of people don’t care about these kinds of specs. And the iPhone XR gets by with wireless charging compatibility, a 12Mp camera with OIS and an incredibly fast processor.

A big difference is the screen technology. The XZ3 is Sony’s first phone to use an OLED display, capable of deeper blacks and superb colour reproduction. Sony has used Bravia tech from its amazing TV line in the phone, and it shows.

Not to say the iPhone XR has a bad screen – far from it – but it is an LCD with a lower resolution and pixel per inch density.

The XZ3 has the Snapdragon 845. We won’t see the next top tier Qualcomm chip until next year around the release of the Samsung Galaxy S10 in February, so it’s got a few months as the best about.

The A12 Bionic in the iPhone XR is the same processor as in the more expensive iPhone XS and XS Max, meaning it’ll be newer for longer and won’t be updated till September 2019.

In real life use there isn’t much processing difference between these two phones but features like storage options and screen type might sway it for you.

And no, neither phone has a headphone jack. Apple doesn’t even put a dongle in the box anymore, but Sony does.

The most obvious choice might well be the software. The Xperia XZ3 isn’t an iPhone, and some of you will just want an iPhone.

iOS is inherently more secure, stable and easier to use than Android (slight generalisations, but they stand up). This isn’t to say Android is insecure, unstable or harder to use but it’s not as simple as iOS.

iPhone users also benefit from great integration with iPads and Macs and Apple’s online iCloud storage. Apple will also support OS updates on the XR for four or five years.

Sony’s version of Android is great though, with a light skin over Android 9 Pie that doesn’t change much (a good thing). The XZ3 also gets excellent monthly security updates, not something all Android phones have.

It’s also got tap-sensitive sides that let you go back or bring up a small menu of apps for quick launches.

Android is more customisable than iOS too, meaning you can mess about with themes, settings and more to make it wildly different from other Android phones. You can’t do this on an iPhone.