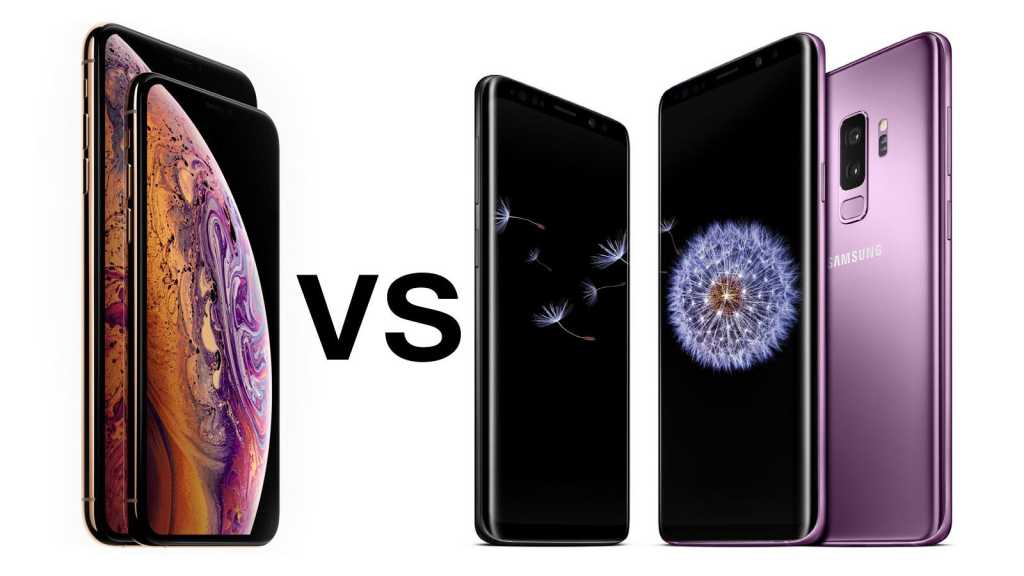 With the new 6.5in screen option on the iPhone XS Max Apple now offers a direct rival to the Galaxy S9 Plus. But, despite Samsung’s phones remaining at their original selling prices, they’re still by far the cheaper option. That’s if you buy your phone outright, but even on contract there’s still a large gulf between these phones.  If money is no object, the choice is – oddly – harder. The S9 duo have a handy headphone jack and microSD expansion slot. Just remember that the S9 has just one rear camera, though. Ultimately, these are all top-notch, best-in-class phones and you will be happy with any of them.

Assuming that you have no affiliation one way or the other with iOS or Android then choosing between the iPhone XS and Galaxy S9 isn’t easy.

Even if you are a long-term iPhone or Android user, moving to the other operating system isn’t impossible but it does require effort.

Here, then, we’ll compare the iPhone XS and the Galaxy S9 mainly on their hardware specs and features, as well as the all-important price.

The iPhone XS – pronounced Ten S – is the newcomer this time around; we compared the then-new S9 with the iPhone X back in March 2018.

Frankly the conclusions aren’t that different now, since the XS is very similar to its predecessor overall. However, the XS Max brings a new choice to the table – an iPhone with a 6.5in display – and could well be your pick if you prefer the biggest possible screen.

Before we dive into specs, though, here’s a quick price comparison so you can see what each option will cost you.

The 512GB option is new for the iPhone, but does push the price up. There’s just one capacity for the Galaxy. That keeps pricing simple, and it’s because you can add storage via microSD – up to 400GB cards are supported.

And here are the best Galaxy S9 deals

If you’re already familiar with the iPhone X, you’ll know that the XS is largely the same but with the new A12 Bionic processor inside. There are a couple of other minor upgrades: better stereo sound, the ability to adjust depth of field after taking portrait photos and Smart HDR, where photos have even better dynamic range.

Apple says the screen can show 60 percent better dynamic range in photos. It’s unclear whether this is because of the new Smart HDR photo mode, or improvements in screen technology. However, brightness and contrast figures remain the same as for the iPhone X.

The XS and XS Max both support HDR10 and Dolby Vision content (the iPhone X only lists Dolby Vision support in its specs). The S9’s screen, being OLED like the iPhone’s, also supports Mobile HDR, but not Dolby Vision.

Water-resistance has also been improved to IP68, which is the standard the S9 and S9 Plus comply with. Apple says it means the iPhones can be submerged at a depth of 2m for up to 30 minutes. Samsung quotes a depth of 1.5m, despite the same IP rating.

The XS Max is an all-new model for Apple, but has the same specifications and features as the XS. The only difference is the screen size. Obviously this makes the phone itself larger, and it’s also quite weighty at 208g. The Galaxy S9 Plus has a slightly smaller 6.2in screen, is narrower and almost a millimetre thicker than the XS Max, but weighs almost 20g less.

This handy table shows at a glance how the main specs stack up against each other:

In terms of design, there’s nothing revolutionary here. Both the Galaxy S9 and iPhone Xs look pretty much the same as their predecessors. They’re great-looking phones, but no-one is going to spot that you have the latest model in your hand.

They may possibly notice the iPhone XS Max, but this uses an identical – albeit larger – design to the smaller XS.

Apple was the first company to introduce a notched screen, and that has been carried over to the new models. It houses the front 7Mp camera, a light sensor and the Face ID components. Face unlocking works faster than on the iPhone X thanks to improved algorithms and a faster Secure Enclave on the A12 chip.

The S9, meanwhile, has a fingerprint sensor (it does allow face unlocking, but it isn’t as secure as Apple’s version). You won’t find a notch in the S9’s screen, but there are top and bottom bezels. The S9 is just over 4mm taller than the iPhone X because of this, but the S9 Plus is virtually the same height as the XS Max, because it has a smaller 6.2in diagonal.

Quality-wise, these are some of the best screens in the industry, and although we’re yet to test out the XS and XS Max, we’re certainly Apple won’t have overstated the claim of them being the most colour-accurate around.

The iPhones also have 3D Touch and a 120Hz touch layer – not the display itself, but the touch-sensing part – which the Samsung phones don’t have. But they’re unlikely to sway your choice.

Turn to other features and Samsung still offers a traditional 3.5mm headphone socket, a microSD slot and NFC. The iPhone has the latter, but it’s only for Apple Pay. Being able to add storage via a microSD card is less expensive than spending hundreds for the top-capacity iPhone and you don’t have to decide at the moment you buy the phone.

However, not all apps can be stored on an SD card and performance isn’t guaranteed.

We need to spend some time shooting video and taking photos on the iPhone XS before we can make any judgements about whether it’s better than the S9, but the on-paper specs are no different from the iPhone X.

That’s misleading, because there’s a better ISP in the XS which allows it to do better face detection, take more simultaneous frames for better HDR photos and also what Apple is calling ‘Extended dynamic range video’. Plus, as mentioned already, you can adjust the depth of field after the fact on photos taken in Portrait mode and there’s better bokeh – the blurriness in the background.

Since people care just much about these things, if not more, than technical image quality, it could well be that the XS is noticeably better.

Unlike in the past, you don’t have to compromise on cameras when you buy the smaller iPhone. Both have an identical setup with ‘wide-angle’ and 2x telephoto lenses.

Samsung uses Apple’s older approach, which is to put a single camera on the smaller S9 and a dual-camera arrangement on the S9 Plus. Remember, though, it has a clever adjustable aperture which can be set to f/1.5 and f/2.4. Plus, it can shoot 960fps slo-mo.

Again, this is yet to be tested, but battery life is likely to be similar for both phones. Apple has increased battery life compared to the iPhone X, but an extra 30 minutes won’t be life-changing. The bottom line is that these are all one-day phones, or 1.5 with light use.

Unlike phones with 4000mAh batteries – or bigger – you’re not going to see 2+ days of use between charges.