The Mijia is an impressive gimbal which works just as well as DJI’s Osmo Mobile 2. The app is almost identical, too, but has some bugs and sign-in issues. This means that unless you manage to find the Mijia at a significantly lower price than the Osmo, there’s no good reason to buy it instead of DJI’s gimbal.

When you think of gimbals your mind probably associates them with drones. But handheld gimbals designed for smartphones have been around for quite a while now, with DJI’s second-generation Osmo Mobile bringing down the price a lot and setting the gold standard for what to expect for £130/US$139.

So it’s interesting to see Xiaomi bring out an even cheaper option using its sub-brand Mijia.

For the uninitiated, a gimbal smooths out the shakes and movement you get when walking around while recording video. Some phones already provide excellent stabilisation so don’t really need a gimbal, but others – such as the Huawei P20 Pro – only offer it at 1080p.

Many phones provide worse stabilisation in 4K because they can’t crop the footage as they can at lower resolutions. So if you’re unhappy with your phone’s 4K video stability, you really need a gimbal.

GearBest sent us the gimbal to review and currently charges £103.97 for it, which is cheaper than the Osmo Mobile 2. You can buy it here from GearBest.

It’s available in black as well as the white/silver version we were sent.

Importing it from China can land you with extra costs in the form of import duty and VAT, so expect the total bill to be more like £135 / US$125.

So you may not actually save any money compared to the Osmo Mobile 2.

Another alternative is Zhiyun’s Smooth 4 for £109 from Amazon.

Like the Osmo Mobile 2, the Mijia is made from plastic. Yet build quality feels good and there’s a reassuring weight to it.

That’s mainly down to the 5000mAh battery inside the handle which can charge your phone. But without this power drain, Xiaomi says the Mijia will run for 16 hours between charges.

Even with a full week’s testing we didn’t get close to 16 hours’ use so we can only say that – with just an hours’ use every day – you won’t need to charge it for at least a week.

Controls are kept to a minimum without resorting to too many dual-function buttons. On the front you get a power / record button and a second one for taking photos. Above these is a four-way joystick for controlling pan and tilt and, on the back, is a trigger for locking the gimbal’s rotation and a zoom slider.

A rubber cover on the base hides a standard tripod thread, and there’s a microUSB connector under a flap on the side for charging. Despite claims that the gimbal can work as a power bank to charge your phone, there is no USB-A port into which to plug a phone.

The gimbal itself is a three-axis machine as you’d expect, and the phone holder has a lock screw which can be released so you can turn it 90° and shoot in portrait mode. 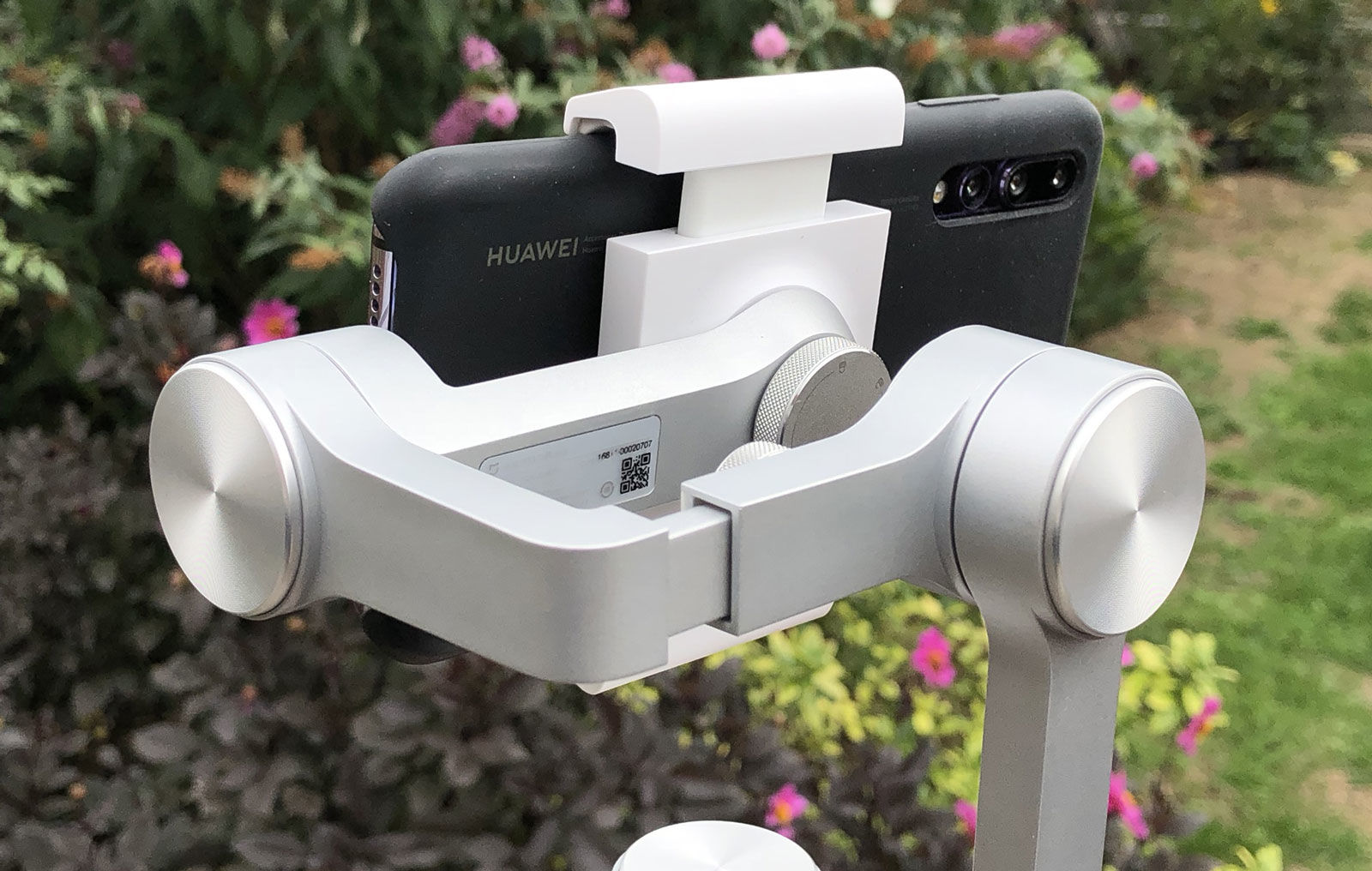 A second lock screw allows you to balance taller, heavier phones, and we found it could accommodate the P20 Pro with no problems. The official specs say it can handle phones up to 200g and up to 86mm wide. The minimum width (in case you’re thinking you might use it for your action camera as well) is 56mm.

One of the main issues you’ll face is that the instructions are entirely in Chinese and even if you scan the QR code, it’ll take you to a page in Chinese.

Fortunately, there is an English app in the Google Play store called Mi Gimbal, and that’s the one you need. (For iOS, download the FiMi app from the App Store.)

It’s massively frustrating that you have to create a user account, since there’s no good reason to have one, and the system is confusing because you initially create a ‘Mi account’ with Xiaomi, but the app asks you to log in to a FiMi account, which is entirely different. So you have to create two accounts, and use the FiMi on to get access.

Once you’re in, the app has a clean interface which is clearly inspired by DJI’s app for the Osmo Mobile. That’s a good thing as it’s easy to use and doesn’t get in the way. It doesn’t use the extra width available on 18:9 phones, however. 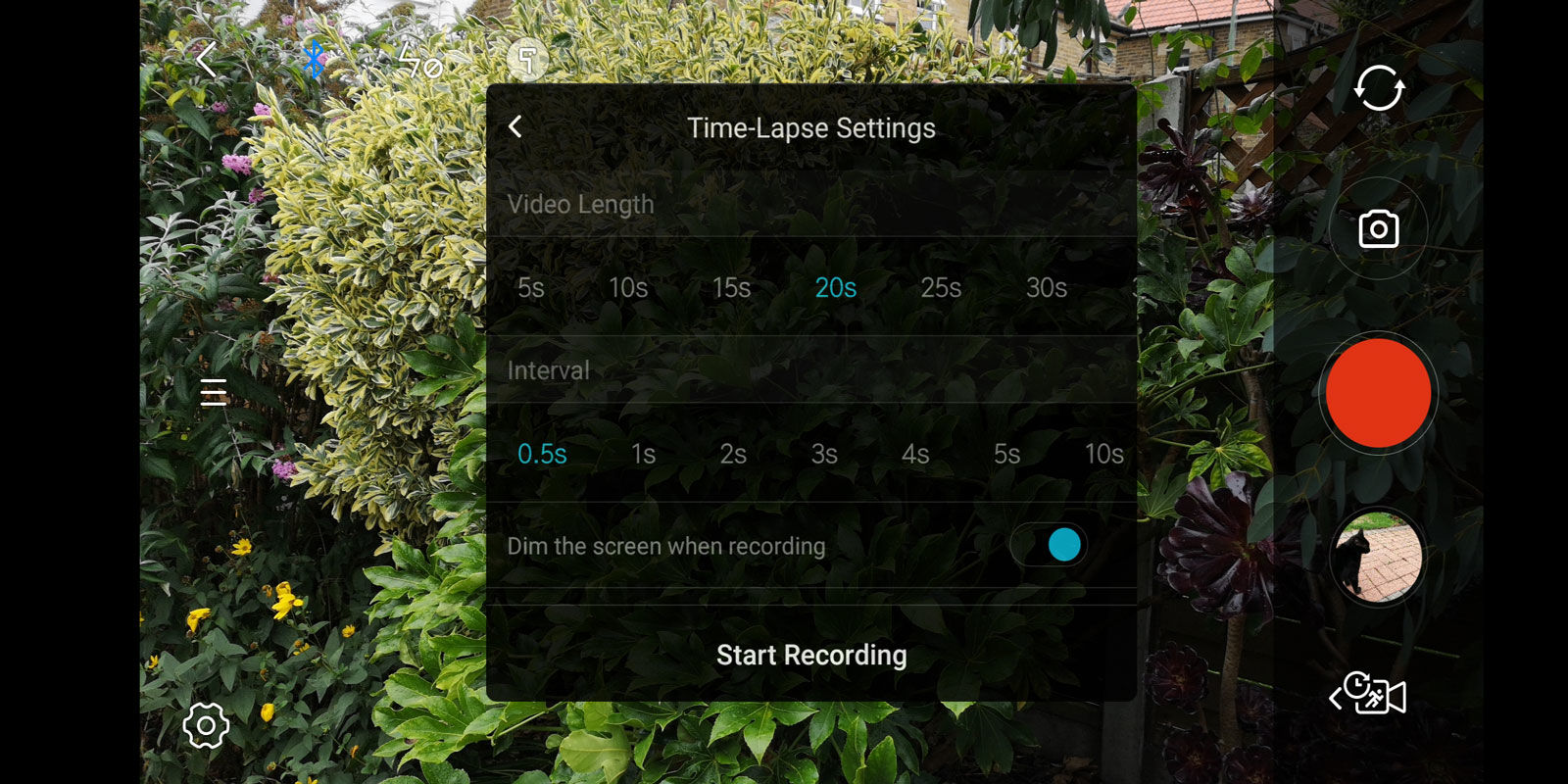 You might wonder why you need an app when you could just use your phone’s camera app, but it’s much more convenient to use the gimbal’s buttons to take photos and record videos than trying to tap on the phone screen when it’s in the gimbal.

Don’t waste any time trying to pair it via your phone’s Bluetooth settings: it won’t work. Instead, open the app, tap the Bluetooth symbol and then tap the gimbal when it appears in the list. Again, this is the same way the Osmo Mobile works.

Without the app, you can’t use the object tracking feature. Again, similar to DJI, this works by drawing a rectangle around your subject when the mode is enabled and the gimbal will move to try and keep it in the same place in the frame. It works well so long as you don’t move too fast.

There are also Time-Lapse and Move-Lapse modes. The former just records a standard timelapse video, but the second lets you program the gimbal to move between different points. You choose the duration of the video you want and the interval, from 0.5 to 60 seconds. A useful ‘dim screen’ option saves battery power in this mode.

Move-Lapse is where the tripod mount is invaluable, as it means you don’t have to try and hold the gimbal still for a long time.

The trigger on the back is used when you want to lock the yaw so the gimbal points in the same direction and doesn’t turn left or right. This lets you approximate slider shots, and is useful if you’re tracking a subject by walking alongside it.

A double-press of the trigger re-centres the gimbal, and in the settings you can change this function as well as adding a triple-click function.

The settings also include plenty of options for adjusting the horizon to ensure it’s level, and also various modes for different operation speeds, plus  a custom setting where you can set these yourself.

A bug present in the Android version meant that the last frame of the video you just shot remains on screen, so you have to go into the settings and back out to reset it.

Finally, the zoom slider is relatively useless as it merely zooms digitally and doesn’t even do so smoothly. It zooms slowly, but jerkily, if you hold the slider to the left or right, and doesn’t support any telephoto lens your phone might have. So our P20 Pro’s 3x lens is wasted here.

The only way to use it is to shoot video with the stock camera app.

Even when walking, it managed to smooth out any handshake and even most of the tell-tale up-down movement you inevitably see from gimbals.

The footage at the top of this review better shows how effective it is and demonstrates the kind of smoothness you can expect no matter what your phone’s stabilisation capabilities.