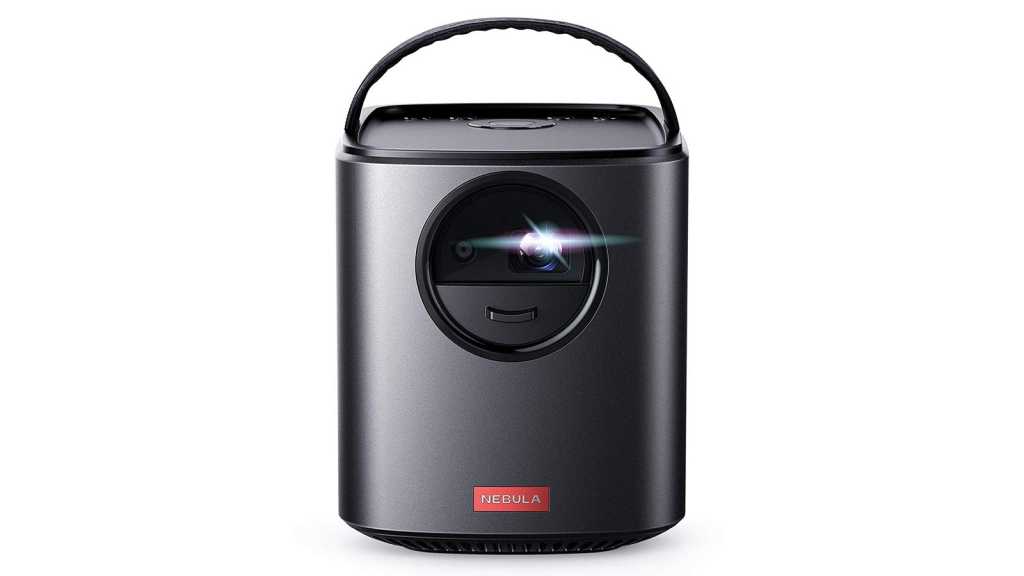 Anker’s latest Mars II portable projector has so much to recommend, from the excellent battery life and intuitive controls, to the built in Android operating system, decent sound quality and automatic focusing. The HD display quality is good for up to 150in, and it’s certainly of a watchable quality. In a future revision we’d love to be able to control the screen size without moving the unit, however, and the inclusion of Google Play would make operation so much easier. At £469.99 it’s pricey but still a great buy – get it now from Amazon.

This is the second-generation Mars projector from Nebula, by Anker. Now with improved battery life and single-second autofocus, it’s worth a look if you’re keen to spec up your home cinema.

It’s not cheap when compared to some other portable Android DLP projectors, but it comes from a brand we know and trust and has some fancy extra features and very good battery life. You can pick up the Mars II from Amazon for £469.99.

Anker has done some tweaking behind the scenes for its latest projector, and for the most part those changes are for the better. It’s a shame it has had to reduce the brightness from 500- to 300 Ansi lumens in order to keep down costs, however, because this really does make it difficult to see the picture without viewing in a darkened room.

On the plus side it’s extended battery life from three- to four hours. We’ve seen so many portable projectors that barely last long enough to stream a film that it’s good to learn this won’t be a problem here.

That’s for video playback, and for audio it’s even more impressive. When used in Bluetooth speaker mode the Mars II can keep going 30 hours before it needs a recharge. You can keep an eye on how much power remains using four LEDs on the top of the unit, and when it runs down the supplied proprietary DC charger will refill the projector in three hours.

The built-in 12,500mAh battery certainly makes this projector portable, but it is still rather large and heavy compared to some projectors. It’s shaped very much like a lantern, and looks like one in use. A leather carry strap is attached to the top, but it’s otherwise all plastic.

It’s also added a single-second autofocus feature, which means wherever you place down the Mars II it will automatically reconfigure the image so you get a clear view – and that’s not a given with these portable devices.

With automatic keystone correction also built in the image will be levelled up and squared off, so generally speaking you needn’t worry about lining up the projector straight on.

The JBL speakers have been switched out for Anker’s own, now with two 10W drivers and bass radiators. Sound quality and volume is impressive for a portable unit, with large speaker grilles either side of the device, and noise from the rear fan is kept relatively low at

Mars II in use

Setting up this portable projector is really easy: you just sit it down and pull down the lens cover which acts as a power button. It will automatically focus the image, and to make it bigger or smaller you simply increase or shorten the distance between the projector and the display area.

That’s good and bad, of course. Good because it’s so easy to adjust, but bad because it dictates where you can and can’t place the projector and sometimes that’s just not practical. A tripod hole on the bottom might come in handy for positioning. However, we’d much prefer to be able to adjust the screen size within the software, though this would almost certainly add to the cost.

You can then connect to a Wi-Fi network and either download streaming apps from the preinstalled app store or stream content from a secondary device.

The Mars II has both USB 2.0 and HDMI 1.4 ports, so it’s easy to hook up another streaming device, while Miracast and AirPlay support let you easily stream content from a phone, tablet or laptop.

Note that the Bluetooth support is reserved for speaker mode, however, which means you can stream audio only when projection is switched off.

The Mars II is running Android Nougat 7.1, but it does not include the Google Play store. Some of the apps you’re likely to want to install, such as YouTube and Netflix, can be found in Anker’s app store.

However, for anything else you’ll need to either install a browser and then download the APK, or sideload it via the USB port. This is a simple process, but admittedly may be offputting for less techy users.

Controlling the Mars II is made really easy, and you have three options for this: first, using the hardware buttons on top of the unit itself, which are useful as long as you’re not mounting it to a ceiling; second, via the bundled remote control, which also has an intuitive point-and-click mouse mode (annoyingly it runs on CR2032 batteries rather than AAA, but some are supplied in the box); and third, using the free Nebula Connect app for iPhone or Android.