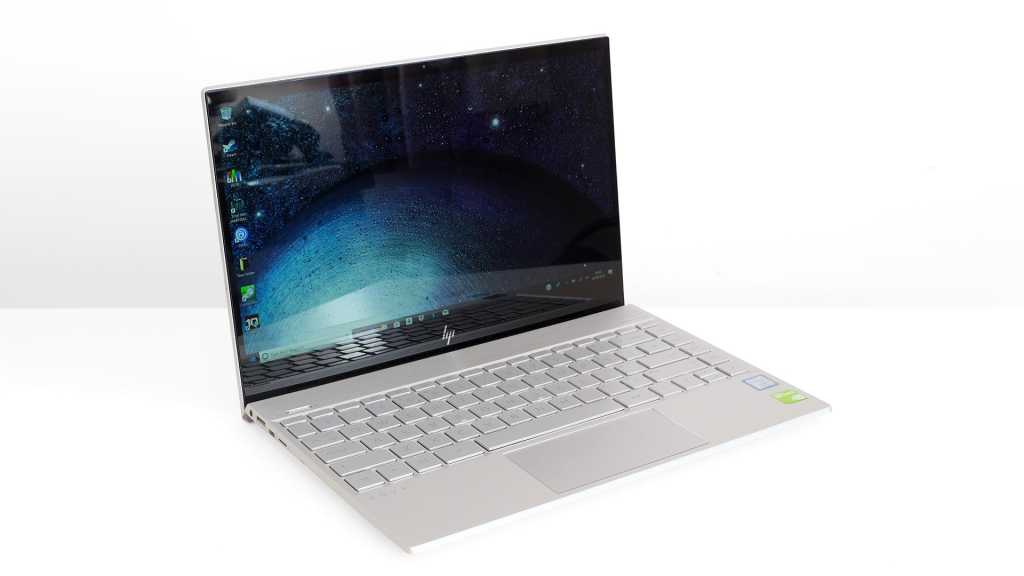 The Envy 13 is one of your very best options if you want a laptop that looks and feels roughly as good as a Dell XPS 13 or MacBook Pro 13, but costs a lot less. It’s all aluminium and glass, but is hundreds (and hundreds) less than the most desirable models. You lose out a little on screen brightness and slimness, but the compromise feels more-than worth it if you’re careful with money. There’s even discrete graphics. And while the GeForce MX150 won’t worry a GTX 1050 or wow hardcore gamers, it does add a welcome side order of fun to this very practical laptop.

The HP Envy 13 is one of the best laptops around if you like the idea of a MacBook or Dell XPS 13, but can’t stomach the expense. Here’s our full review of the 2018 model, complete with 8th-gen Intel and Nvidia graphics.

There are a few little compromises here, like a dimmer screen, minor flexing and a slightly oversensitive trackpad. But the value and design are spot-on, and the GeForce MX150 GPU plays games better than many Ultrabooks twice the price.

Note: The laptop has now been replaced by the Envy 13 (2019) but you can still get this older model if you want something a little cheaper.

The HP Envy 13 is simply a great deal, particularly if an all-aluminium shell is a must-have on your list.

You get a one-year warranty as standard, but at the time of writing you can get the laptop with a 3-year warranty worth £99 for free if you buy from the HP Store. Not bad.

Initially the HP Envy 13 looks very similar to the version we reviewed last year. It’s silvery, made of aluminium and has a slightly more angular style than some of its rivals.

It’s no MacBook clone, despite being a small metal laptop that, boiled down to a sentence, sounds just like a MacBook Pro 13.

Since last year HP has made no grand changes. However, weight is just fractionally lower at 1.3kg and it appears to be slimmer, without any real change in thickness. The HP Envy 13’s underside now tapers at the ends, so it looks much thinner than before, even though it isn’t.

The brilliance of the HP Envy range is you could likely tell a friend you spent several hundred pounds more than you did without a flinch. Well, with no more of a finch than the idea of a £1,200 or so laptop usually causes.

HP’s Envy 13 looks slicker than the rival Acer Swift 3, and has more solid build than most of the more affordable Asus ZenBook models we’ve reviewed in the last year. There’s very minor flex to the keyboard under a significant amount of finger pressure, and the lid’s aluminium backing isn’t as stiff as a MacBook’s.

If that’s what we lose from paying half the price of a MacBook Pro, it sounds like a good deal.

A few parts of the HP Envy 13 design that haven’t changed this year could be improved, but we’re glad HP hasn’t fiddled with the keyboard much. It’s still a solid, slightly springy-feeling keyboard with deeper feedback than some of the newer “ultra premium” designs.

For the first 30 minutes or so we were left wishing the HP Envy 13 had a slightly crisper action. However, its keys just have a lower pitch feedback. The depress of the clunk is both clear and meaty.

There’s a keyboard backlight too. It’s a fairly weedy blue-ish LED light without the multi-level control you might get in a laptop twice the price. But we’re glad enough that it’s here. That it shines through the key lettering as well as the keys’ borders is welcome too.

Below you get roughly the same trackpad as the 2017 Envy 13. It’s glass, and not particularly tall, but it is pretty wide. It’s smooth, the click feedback feels good and there’s no pre-click floating or any issues with button zones. Only the right quarter to a third is taken up by the right mouse button, avoiding accidental presses.

We do find the Envy 13’s pad susceptible to registering taps when just scrolling around an interface or web page. However, if you get annoyed by this you can always turn off “quick tap” clicks, so the pad will only register a button press when you actually push the pad fully.

There’s also a fingerprint scanner on the side. Just hold a finger against it to avoid having to input your lock screen pin or password.

It works fairly well, better than some other models that only seem to recognise your finger 30 percent of the time. However, it doesn’t have the most intuitive of ergonomics, so may take a week or so to become accustomed to.

The main compromise here is something that affected the last Envy 13 in exactly the same way. Its screen isn’t all that bright.

It maxes-out at 281cd/m2. That’s bright enough for indoors use, but outside on a sunny day? The HP Envy 13 will struggle, particularly as it has a glossy, Gorilla Glass-topped screen rather than one with a matt finish.

Also just like the last model, the Envy 13 covers 78 percent of the sRGB colour gamut and has contrast of 876:1. It really does seem like this laptop has exactly the same screen panel as its predecessor.

For the most part, that’s no bad thing. Colour is rich enough for enjoyable movie-watching and while we would like to see the Envy 13 get closer to 1000:1 contrast, we can’t say we’ve noticed a lack of contrast in normal rooms.

Black levels seem fine in dim-ish and lit rooms, so it’s perhaps the lack of brightness that holds back contrast just slightly.

The Envy 13 has a 1080p screen in all UK iterations (4K versions are available elsewhere). So while pretty sharp, you will see some pixellation in small fonts close-up. MacBooks are a lot sharper, bar the extremely dated Air models.

Unlike a MacBook Pro, the Envy 13 also has a touchscreen. While a welcome feature, it would feel much more useful in a laptop with a hybrid design and stylus. The Envy 13 is definitely not a hybrid, as its screen cannot fold back more than the bog-standard 130 degrees.

Aside from a minor design tweak or two, the biggest change in the HP Envy 13 this year is in its performance. HP has, of course, switched from using 7th-generation Intel CPUs to 8th-gen.

This represents quite a shift, as Intel doubled the numbers of cores in this generation. Our Envy 13 has an Intel Core i5-8250U CPU, with four cores clocked at 1.6GHz and a 3.4GHz Turbo mode. But you can jump to a Core i7 if you want.

It’s a shame the Envy 13 doesn’t have the even newer Whiskey Lake CPUs, a minor 2018 refresh that’s still part of the same generation, but the performance difference is minor anyway. And the laptop arrived before those CPUs did, so we can’t blame HP.

Performance is great, comparable with a much more expensive laptop. You can run demanding apps, edit photos and even video on the HP Envy 13. These kind of jobs are one of the best reasons to choose the higher-end Envy 13 with more RAM. But if such work is your day job you should probably seek out something closer to a desktop replacement laptop anyway.

The Envy 13 comes with a 256GB, down from a 360GB one last year. However, its general spec does seem to have improved, with read speeds of up to a blistering 2485MB/s and writes of a solid (if ultimately unremarkable) 579MB/s.

There’s easily enough power for the Envy 13 to work well as our daily work machine. More than we need, if anything. It scores 11,357 points in Geekbench 4, dramatically more than the 8,499 we saw in last year’s version. And that was an Intel Core i7 laptop.

The Envy 13, just like last year’s model, also has a special move. It has an Nvidia GeForce MX150 graphics card. You can consider this a middle-ground between the graphics hardware built into slim and light laptop CPUs and “gamer” graphics cards like the GeForce GTX 1050 and higher. What can it do?

Neither is playable unless you have low standards, but drop the graphics down further and this ultra-demanding game should run OK. Ghost Recon: Wildlands runs at 23fps Medium, and a truly painful 8.4fps at Ultra. Still, chop some of those settings down further and you should get tolerable results. Or really quite good ones at 900p resolution.

This may not sound like much, but it’s far better than supposedly more desirable and expensive style laptops that only have integrated graphics.

As a laptop with a reasonable amount of power, the HP Envy 13 does have a fan, and it does kick in even when you’re performing fairly light tasks. However, you can’t really hear it above the sound of office aircon.

The HP Envy 13 has a great array of connections. As long as you don’t need a standard HDMI video output. The single USB-C can be used to connect a monitor or TV, though, and you get such an adapter in the box.

You also get two full-size USB ports, which have cute little “drop jaw” mechanisms. Their use does seem sightly amusing when this laptop isn’t, at this thickest, really any thinner than last year’s model, which had normal USB ports.

The HP Envy 13 also has a microSD slot and headphone jack. A classic cylindrical socket is used to recharge the Envy 13, rather than the USB-C. That’s for the best, given there’s only one USB-C port.

The Envy 13 also has Bang & Olufsen speakers, with B&O sound customisation. While not at the level of a MacBook’s speakers, these are perfectly solid.

There’s no truly low bass, but there is enough upper bass to side-step the thin, weedy sound we want to avoid. And both the mids and treble are fairly clear-sounding.

The Envy 13 has a 52.3Wh battery, a very good capacity for a 13in laptop. Older Dell XPS 13 models had bigger cells but Dell’s latest model has almost exactly the same capacity (52Wh).

HP says the Envy 13 lasts for “up to 14 hours”, or 10 hours 45 minutes of video. We tried the video playback test for ourselves, with a 720p movie played at 120cd/m brightness. Thanks to the relatively dim screen, that’s a whopping 75 percent brightness level when most are around 40 percent.

It lasts 8 hours 57 minutes. You’ll need to make sure a browser isn’t using too much CPU power in the background to get the Envy 13 to last a full day. However, it’s still competitive longevity.

However, we did get better results from last year’s model, 12 hours 20 minutes.