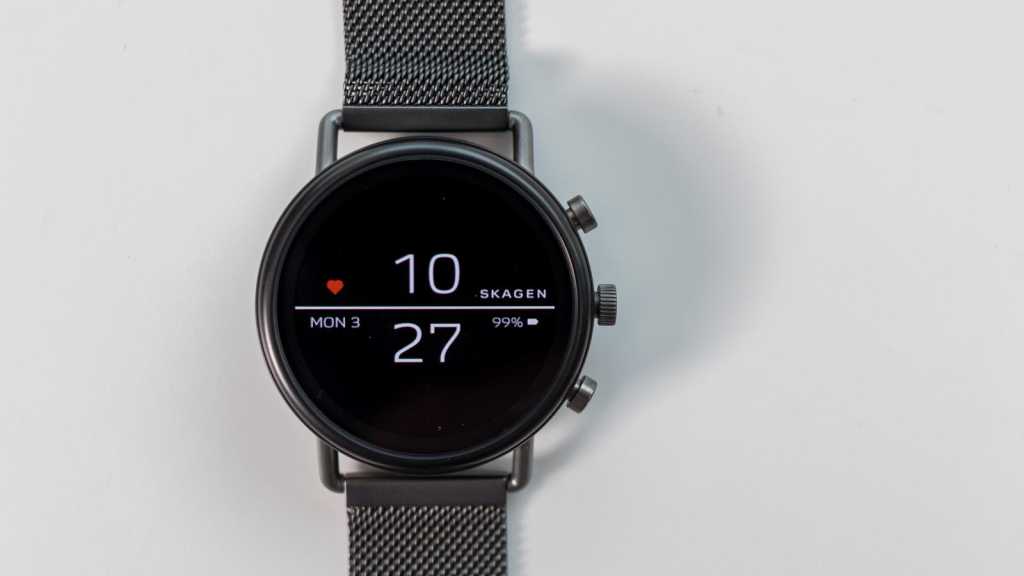 While the design is great and the new Wear OS update is a plus, the Falster 2 isn’t quite the home run we hoped for. The one-day battery life is a disappointment.  Despite adding GPS, NFC and waterproofing, the performance is a little sluggish and it doesn’t bring anything new to the table. This is more a criticism of the software than the hardware itself which is a shame as the Falster 2 is one of the nicest looking smartwatches around, notwithstanding its flaws.

In our review of the original Skagen Falster we lamented that the attractive, minimal design was match with few technical features.

The new Skagen Falster 2, incredibly, successfully addresses all of those faults and pretty much fixes them. It’s a testament to the stasis of Google’s Wear OS that we still don’t think the Falster 2 is a great smartwatch. It’s fine.

The design is ever better and more premium than ever while Skagen has almost unbelievably added all the features the first one was missing – GPS, NFC, swim-proofing and a heart rate sensor.

Best of all, it will cost the same as before. But just because it has more features for the same price it still pales in comparison to the Apple Watch and what we feel the long promised next step in Android wearables could be.

The Skagen Falster 2, brilliantly, will cost from  £269 in the UK and  $275 in the US – the same the original Falster cost on release. Considering the boost in design and features this is great to see.

Prices go up for some of the leather and metal strap options.

And so to the good stuff. If you want a Wear OS smartwatch that genuinely looks like a regular, slim, tasteful wristwatch then this is it. It’s our favourite looking smartwatch at the time of release, particularly the one with the leather strap.

Almost unbelievably, Skagen has made a smartwatch that is still thin and nowhere approaching bulky, but stuffed four big new features in – a heart rate sensor, untethered GPS, NFC and waterproofing.

Usually adding GPS and the heart rate sensor makes watches huge (enter the LG Watch Sport) but it’s all here in a subtle design. There’s also a smaller black bezel around the outside of the circular display, meaning the Falster 2 looks even better and more premium than before.

Strap options are either mesh, silicon or leather. Skagen has picked a good choice of looks and materials for the Falster 2, though with the black bezel we feel the grey and silver models look better, particularly the matt finish on the grey one.

The heart rate sensor on the back is very flat if not quite flush when worn but is more comfortable than on bulkier smartwatches. Three buttons now adorn the right side of the watch – great that one of them is a wheel to scroll through menus, unlike on the first model.

Two programmable buttons sit above and below the crown and it’s good to see Skagen embracing this more customisable side of Wear OS where the original Falster was on-rails and feature-light.

It bears repeating that the Falster 2 has GPS, NFC, waterproofing for swimming and a heart rate sensor. This more than justifies the RRP on paper and shows you that the company was charging too much for the first-gen watch.

But adding all that to the watch doesn’t make it a total winner. It in fact makes the battery life pretty average – we got one and a half days at best, and that’s after turning off the always on display, turning off Wi-Fi and not using GPS.

The Falster 2 has the same 300mAh battery capacity as the first-gen Falster and this is good enough if you can put up with charging it every night.

While not specifically a fitness watch, the built-in GPS will let you track your run routes and swimming sessions thanks to the 5ATM rated waterproofing, all working in tandem with the heart rate monitor. Using GPS is accurate for walks and runs (and swims) but drains battery fast.

If you don’t get the silicone strap then you might not want to go running and get sweaty in leather or mesh. It’s nice to have the GPS option on a non-sporty watch, though.

NFC for mobile payments is essential on new smartwatches these days and is in line with Google’s new version of Wear OS that closer integrates Google Fit into the experience. By adding these new features, Skagen and Google are accepting that Apple Watch and Fitbit are doing far better at the health aspect of smartwatches. Google’s catch-up game is afoot.

The watch works pretty fast out of the box but it does chug under heavy loads. This is partly because the chip inside is the long in the tooth Snapdragon Wear 2100 platform, a chip that’s in watches that are two years old. With an update to the latest Wear OS platform the processor is beginning to creak under the load.

Newer watches just coming out such as the  Fossil Sport have the Snapdragon Wear 3100 chip. These watches will be more capable than the old 2100 chip in the Skagen Falster 2.

Everything does work, it’s just a little wait away. If you’re loading apps you’ll spend a lot of time looking at a spinning progress circle. Thing tick along a lot faster on the Apple Watch Series 3, 4, and the Samsung Galaxy Watch.

The most useful things about smartwatches are the time they save us throughout the day, evident on the Falster 2 with features like NFC for payments. But worries about battery life and limitations of what you can actually view on the screen are age-old smartwatch problems that this watch does not fix.

Out the box the Falster 2 was running gen-3 Wear OS but it immediately updated to the latest gen-4. Based practically entirely around a black OS it’s a minimal, slick design choice that suits Skagen’s hardware in this case.

The newer software does a better job of collecting notifications, and alerts now don’t take up the whole display, making scrolling more pleasant and information easier to take in. Despite the circular screen you can get a better idea of the scale of a notification list better than before.

Now you can swipe on the home screen from four directions to access notifications, settings, Google Fit and a Google Feed. The latter tries to pull in useful information like your next calendar appointment, directions home and prompts to use the Google Assistant. It’s pretty helpful but you’ll need to pull your phone out for more detail for most things.

Like the last Falster there are some Skagen-designed watch faces that are less cluttered than some of Google’s and there’s some fitness focussed options there too if you want to closer track your steps and heart rate. But despite the great hardware, Wear OS still feels stunted – especially on hardware where you’re constantly worried about running out of battery.

The watch works well with all Android phones and even with iPhones, with no major feature lost by running it on the latter. We didn’t see connectivity affected by not running it all on Android, and the Wear OS app for iOS is much improved in recent months.

There’s no doubt that the Falster 2 is a better smartwatch than the first-generation model. Adding GPS, NFC, heart rate and waterproofing is excellent. It’s also admirable considering the design is not only slim but also improved in appearance. But it is no revelation.

The main problem here is battery life given it has not gone up in order to keep the design slim. And if you’re into fitness you won’t want to go running in a metal or leather band, so you might have to consider something a bit more fit for purpose.

But if you want all those features in a watch that doesn’t look like it belongs in a marathon, then this is that Wear OS watch – it’s just the same software experience that you’ll find on Wear OS watches from over two years ago.