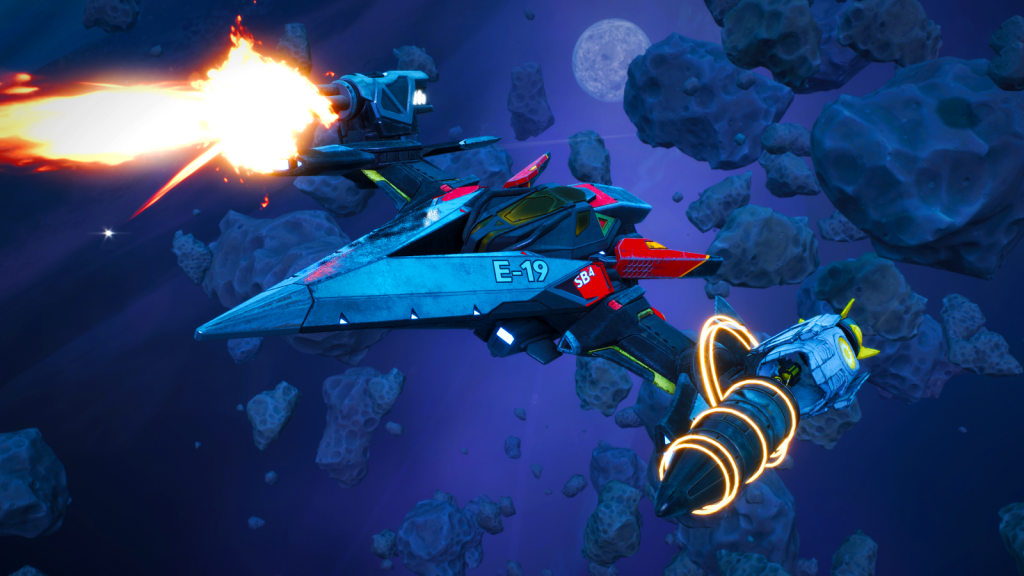 Starlink: Battle for Atlas is a fun, arcade-y revival of the spaceship shooter that’s been filled out with a lot of extra open world stuff – both the good and the bad. The big question mark is how much game you really get if you don’t fork out for the extra toys – but for old-school fans who own a Switch, this could well be the closest we ever get to Star Fox on Switch, and that’s a big sell for some.

Remember the heady days of 2011, when the first Skylanders game came out, sparking the brief (but extremely lucrative) reign of ‘toys-to-life’ games that grew to include Disney Infinity, Lego Dimensions, and Nintendo Amiibo? The genre seemed all but dead, but apparently, no-one told Ubisoft that.

After missing out on the genre’s first wave, the French gaming giant is hoping to single-handedly bring it back to life with Starlink: Battle for Atlas, an arcade-y open-world shooter that lets you mix and match pilots, ships, wings, and weapons to create a toy – and in-game craft – that’s unique to you.

As with any toys-to-life game, the opening hurdle is the price. When it launches on 18 October, the starter set for every platform is £64.99/$74.99, which gets you the main game, a controller mount for the toys, and your first ship and pilot. For PS4 and Xbox you get main character Mason, along with his fighter the Zenith and a choice of three weapons.

On Switch, you’ll still get Mason but will also get Fox McCloud along with the iconic Arwing ship from the Star Fox and Lylat Wars games, though the tradeoff is that you’ll only get two weapons to choose from. 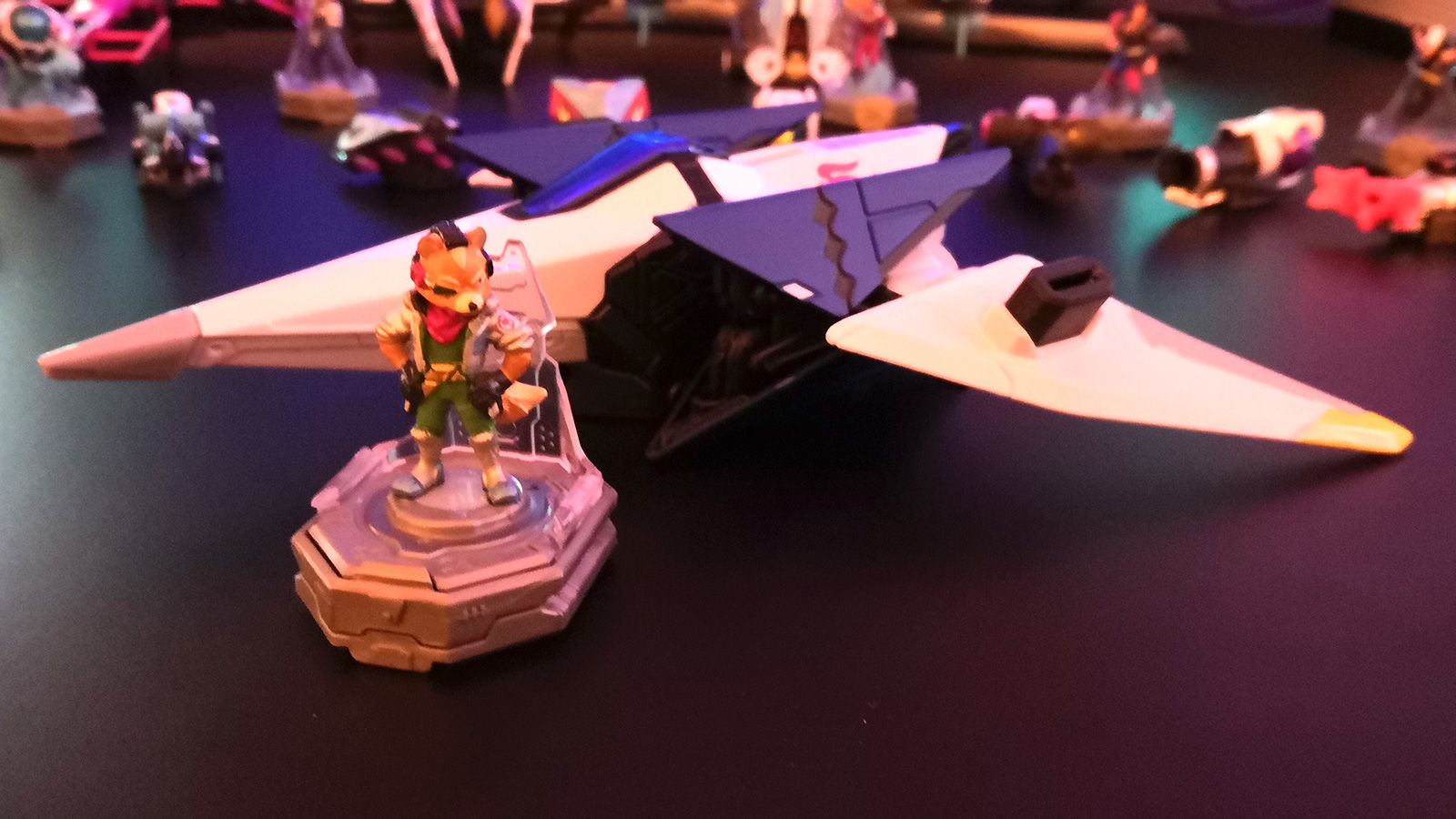 Beyond the starter set you can buy new ships, each of which comes with a pilot and weapon, or just pick up pilots and weapons individually to expand your connection. You can buy any of these as digital versions – and in fact there are additional digital-only pilots too – but the real joy here comes from letting your inner child loose and playing with plastic spaceships.

That’s especially true if (like us) it’s the thought of an Arwing toy (with poseable wing foils!) that’s got you most excited about Starlink, but beyond that it’s telling that Ubisoft has partnered with Nintendo for the Switch version of Starlink, because the Star Fox series really is the natural comparison for a lot of the core gameplay.

Just as in the Star Fox games you fly around in a small space fighter, sometimes on planets and sometimes in the vacuum of space, pew-pewing your laser guns at large groups of enemies and occasionally big bosses with conveniently glowing weakspots.

You’ll spend a little more time on the ground and a little less winging it through space, and the open world is much less linear than classic Star Fox level design, but otherwise the base mechanics feel comfortingly similar – the first mission even comfortingly teaches you how to do a barrel roll, as if to hammer the point home.

The comparison obviously springs to mind strongest while playing as Fox, which nets you extra dialogue between him and his team and an additional quest line (neatly and carefully woven into the story, we’re glad to say, rather than crowbarred in for a spot of fan service) but really this feels like a game that took inspiration from Fox et al. long before Nintendo ever stepped in to license its characters. 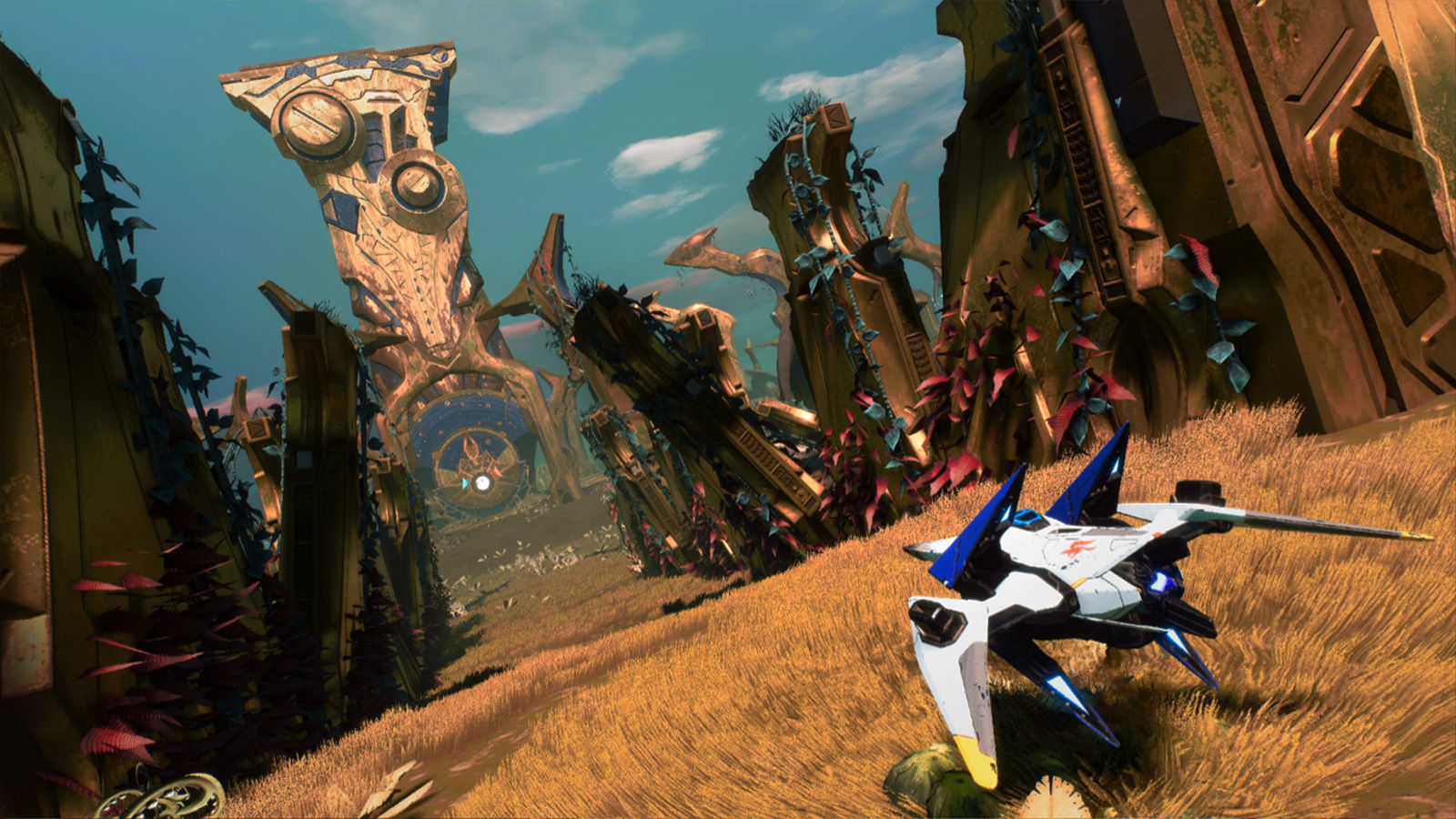 Still, Starlink is more ambitious than a simple Star Fox reskin. For one, there are the toys. Each ship is about the size of your hand, and features interchangeable pilot, wings, and weaponry (though it’s worth noting you can just buy digital versions if you don’t want to pay for plastic), allowing you to mix and match to your heart’s content – with corresponding in-game results, along with the satisfying clicks and thunks of plastic slotting into place.

For starters, each pilot comes with their own dialogue, along with a special pilot ability on a timed recharge. The alien Judge can slow time down for his opponents (bullet-time, essentially), while the rock-inspired Razor can trigger a mini rhythm game to deal extra damage to enemies in bursts.

You can have mismatching wings and weapons, grab a pilot from another ship, and even stack multiple wings to create gargantuan Frankenstein ships – though speed, balance, and handling will all shift depending on your choices. Best of all, the changes are seamless – swap one weapon for another on your figurine and the same will happen immediately in the game, encouraging players with enough kit to adapt their loadout on the fly for each fight.

That’s naturally exactly what the game expects you to do, with different enemies susceptible to certain elemental damage types, and different weapon combos yielding special effects. Shoot your flamethrower immediately after your vortex gun to trap enemies in a swirling orb of fire, or pair ice and fire weapons to stun enemies with the sudden temperature change.

It’s a lot of fun switching between different weaponry on the fly, and it certainly encourages experimentation, but we had the luxury of a nearly full set of Starlink’s accessories to play with, and it’s hard not to wonder how much less fun the game might be with just the starter set – this might not be pay-to-win, but there’s at least a risk that it’s pay-to-have-fun.

That’s an impression not helped by the fact that the game’s system of lives hinges entirely on how many ships are at your disposal. If you’re defeated you can immediately respawn into a new ship – but only if you have a different one available, meaning the number of lives you get correlates directly with how much you’re willing to spend. 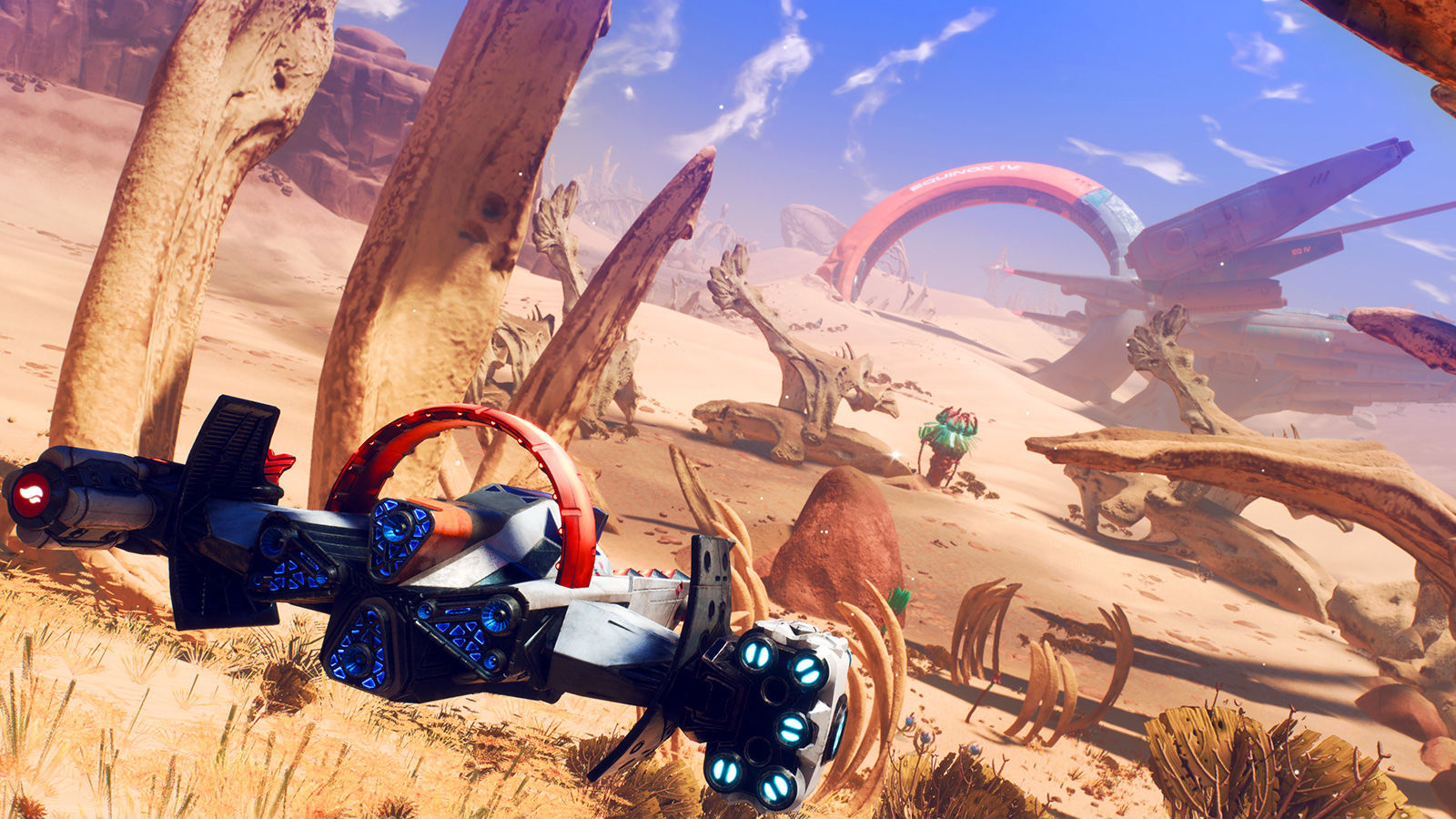 And you will die, because one of the biggest surprises about Starlink is how tricky it can get. Some of the game’s larger fights will prove lethal if you’re not careful, especially the spaceborne dogfights – it doesn’t take many hits to disintegrate your ship, meaning mastering the barrel roll dodge and reflector shield is essential to survival.

This is 2018 and we’re talking about an Ubisoft game, so it shouldn’t come as much of a surprise that there’s also a heavy open world element to Starlink too.

You’re tasked with exploring (and battling for, we guess) the Atlas star system, in which you can seamlessly travel between the various planets. And it really is seamless, letting you fly up from the surface until you break orbit, and vice versa, though in practice you’ll just start fast-travelling between planets as soon as you can anyway.

That’s because the space travel consists of little more than a few asteroids and the occasional outlaw ambush, though the planets themselves offer a little more. For one thing, there’s the aesthetic: a lurid clash of colours, creatures and landscapes that owes as much to the procedurally generated oddities of No Man’s Sky as it does to the stalwarts of the genre.

No doubt you’ll get more graphical oomph out of the game on Sony or Microsoft’s consoles, but the game’s primary colour sensibility actually lends itself well to the Switch’s hardware limitations, and even on Nintendo’s console you’ll probably want to pause simply to soak in the view every now and then. 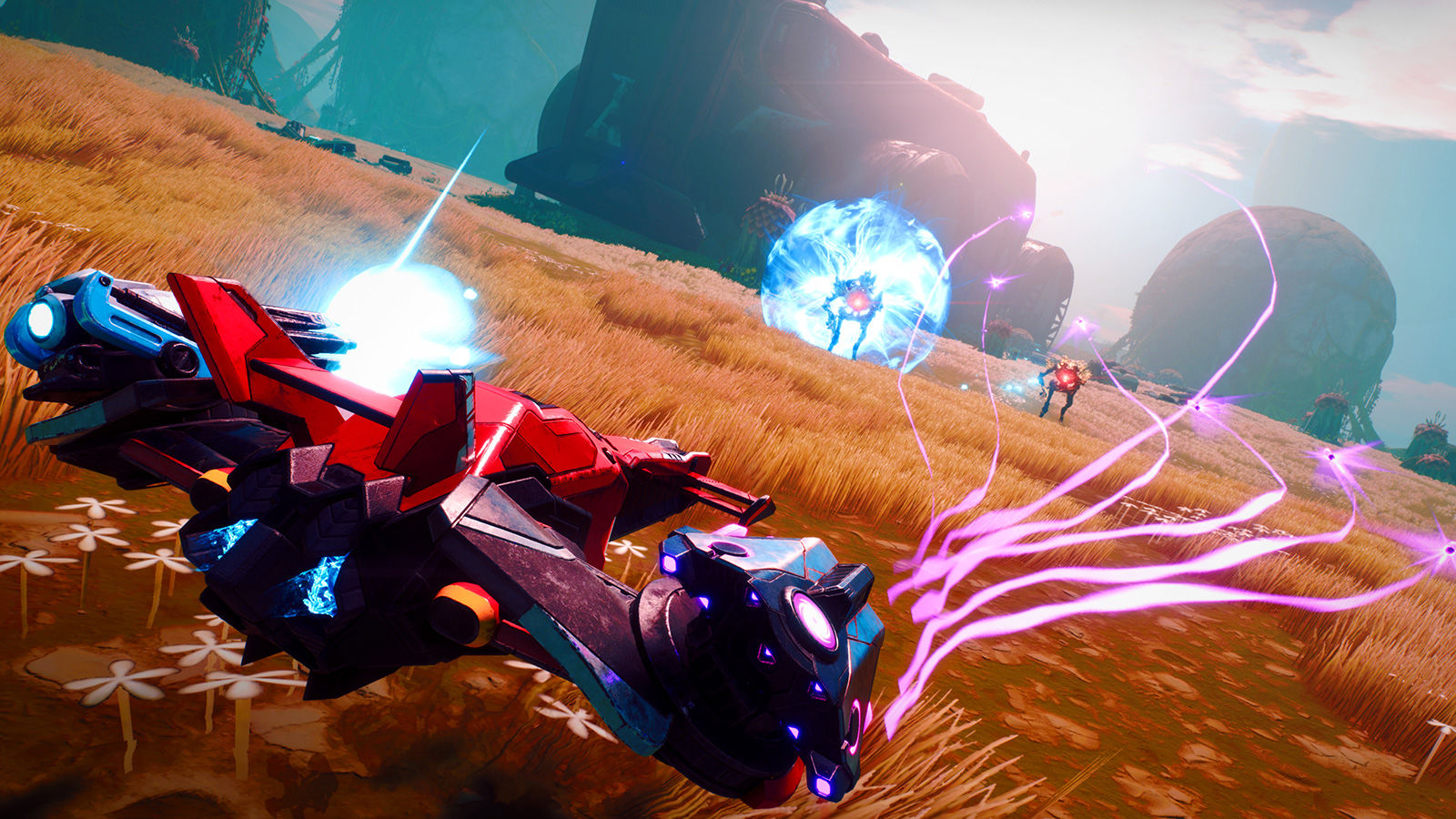 Each planet is loaded with side quests, loot, and hubs to unlock in a way that will feel pretty familiar to any Far Cry or Assassin’s Creed veteran, though there’s less gameplay variety – it’s mostly either combat or fetch quests. These all feed into various upgrade systems to improve your ships, weapons, and allies – the latter of which eventually builds into a surprisingly satisfying system of building and managing an allied force of NPCs on each planet.

Exploring also yields little tidbits of lore about each planet’s history, flora, and fauna. Each of these finds will trigger comment from the game’s larger cast of characters, and this might be where older players begin to pull back a little. The tone is distinctly ‘Saturday morning cartoon’, and some characters *cough* Levi *cough* are probably going to grate on you very, very quickly.

Playing as Fox on Switch helps, as at least some of the chat is swapped out for Fox and friends (not the right-wing kind), but even there you can’t entirely escape the banter. It’s not necessarily badly written, but it undeniably aims for a younger crowd, and doesn’t make much effort to appeal to adult players too.

Still, it’s probably unfair to hold that against a game that has been marketed at kids from the get-go. Starlink is clearly intended to be a lightweight, arcade-y experience, albeit one with enough flexibility and open-world content to keep players going for a while. 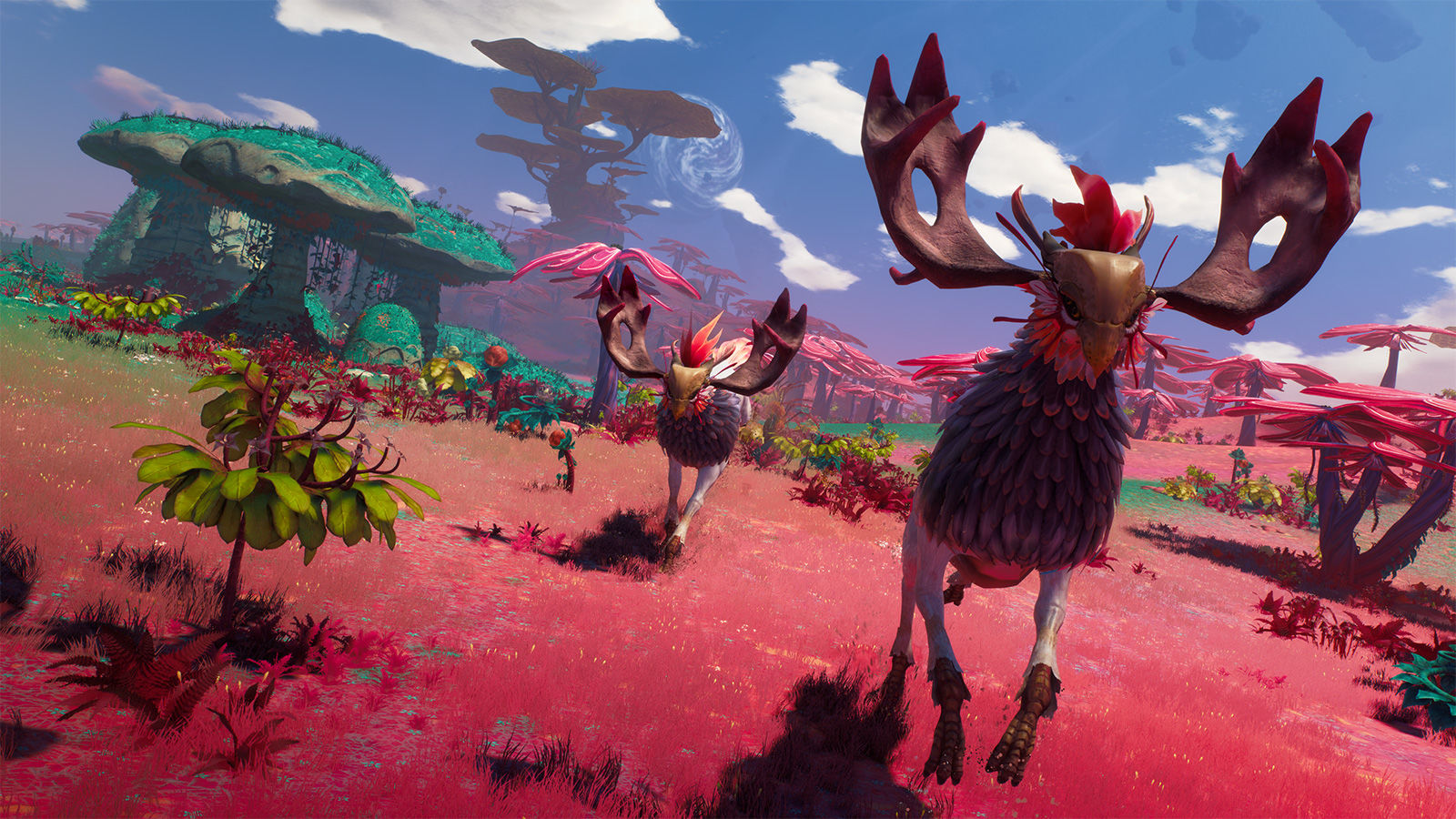 Starlink: Battle for Atlas is a fun, arcade-y revival of the spaceship shooter that’s been filled out with a lot of extra open world stuff – both the good and the bad. But fight through the filler and there’s fun combat and some stunning settings to explore, even if the back end of the campaign runs out of ideas and mostly asks you to do what you did before, but more of it.

The big question mark is how much game you’ll really get if you aren’t willing to fork out for the extra ships, pilots, and weapons – without the chance to switch between power sets and pilots on the fly, there’ll be a lot less versatility to the core combat, which we suspect might begin to fall flat.

There’s also the Star Fox question to consider: for franchise fans who own a Switch, this could well be the closest we ever get to Star Fox on Switch, and that’s a big sell for some. It’s not quite the real deal, but it’s not a half bad impression.