The Mavic 2 is better in almost every way than the two-year-old Mavic Pro. It flies for longer, offers more shooting modes, has all-round obstacle detection and its controller has removable sticks. If you already have a Mavic Pro, it’s hard to justify upgrading as overall video quality – from the Zoom at least – is roughly the same. The zoom lens is well worth having, though, and if you’re coming from a Phantom, the portability will be the deal-maker.

When the  Mavic Pro launched a couple of years ago, it was a game changer. It was the “size of a drinks bottle” and meant you no longer had to cart around a bulky non-folding Phantom which was the size of a large rucksack.

Since then, the Mavic Air and Spark launched, both even more portable, although with the trade-off off much reduced flight times.

Now DJI has updated its consumer flagship with the Mavic 2. The whole range is a bit confusing now, not least because there are two Mavic 2 models: Zoom and Pro. We’ve decided to review the Zoom here as it’ll be the one most consumers will pick.

The two drones are available buy immediately from  DJI.com and to pre-order from partner sites including  Heliguy (which is offering free crash protection) in the UK.

Neither model, then, is what you might call cheap but as you’ll see, the Zoom could well be worth the extra money for you over the £769 / US$799 Mavic Air.

Batteries are new: they’re not the same as the older Mavic Pro’s. Individually they cost £109 / US$119, but a Fly More bundle includes two of them plus a shoulder bag, car charger, hub for charging four batteries at once, and extra propellers for £279 / US$319.

It might look exactly like the Mavic Pro at a glance, but the Mavic 2 is bigger and heavier. The Zoom weighs 905g, the Pro 907g. That’s almost 200g heavier than the older Mavic Pro. 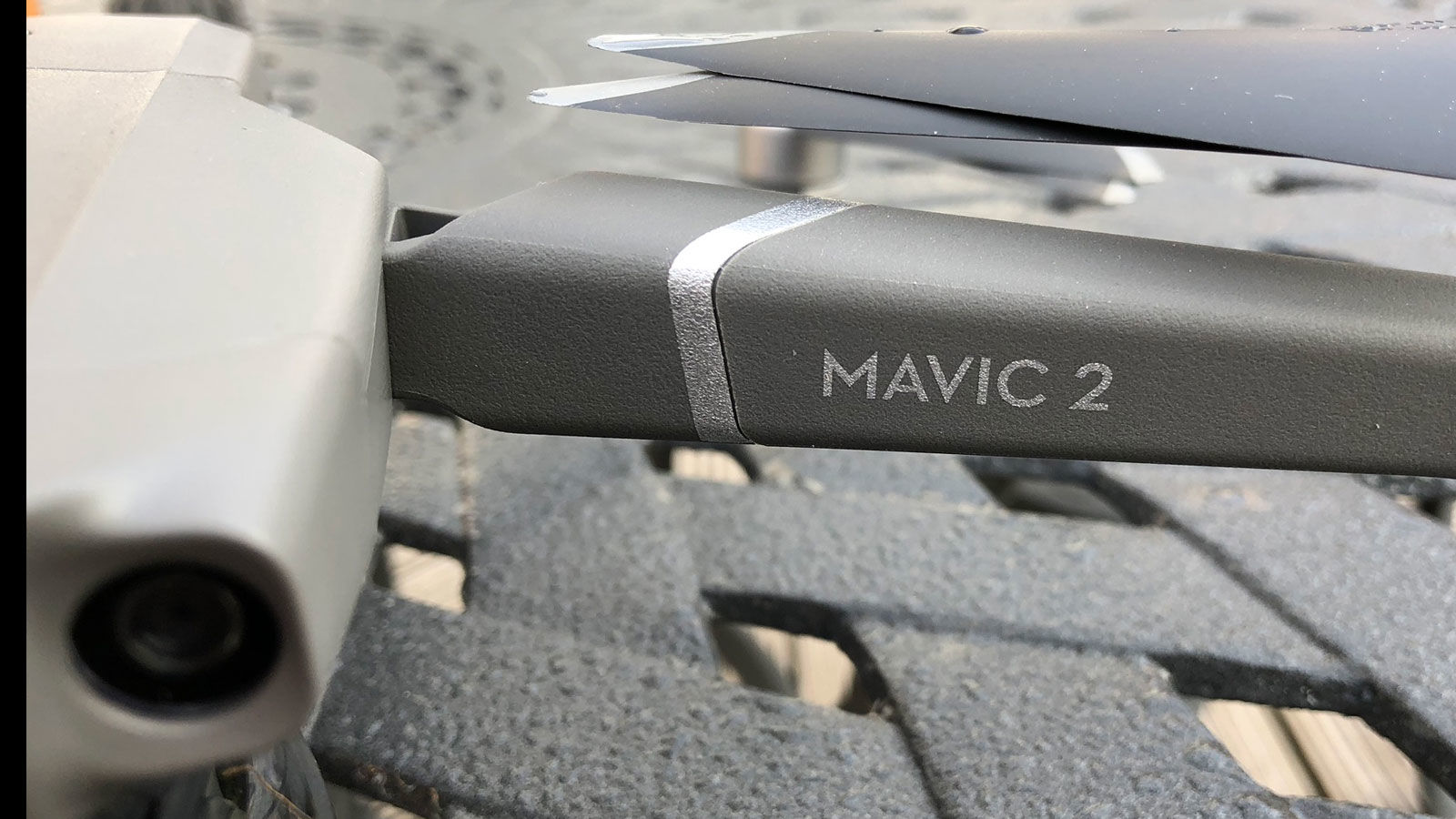 Everything has been tweaked for better speed, longer flight times and quieter operation.

Frankly, though, if you already own a Mavic Pro you’re not really going to notice the benefits of these things. The newcomer is only slightly quieter, slightly faster and flies for four extra minutes.

However, if you’re used to a drone that can’t stay in the sky for even 20 minutes (like the Mavic Air) then 31 minutes feels like a lifetime and is plenty for setting up at least a few Quick Shots and shooting a couple of decently long Hyperlapses.

The big upgrade on the Mavic 2 is the cameras. It’s a little annoying that you can’t chop and change: rumours about the gimbal being removable and swappable turned out to be false, so you have to pick whether you want the camera with a 2x optical zoom lens or the Hasselblad-branded camera with the bigger sensor and the HDR video. Sadly you can’t have your cake and eat with the Mavic 2.

What you can do is to use DJI’s gimbal replacement service to swap one camera for the other, but this is really only a one-time thing and isn’t going to be cost-effective.

Maybe we’ll have to wait for the Mavic 3 to get all these features in one camera.

However, as we said, the Mavic 2 Zoom is likely the drone you’ll want even though it can’t record HDR video as the Pro can.

It’s the first consumer drone (we know of) to have an optical zoom – others make do with digital zoom. Optical zoom is important as it means you can fly further away from your subject. That’s useful in many situations, especially when flying closer would upset people or animals.

Here’s the difference it makes:

It also opens up new cinematic features such as the Dolly Zoom effect, where the drone flies backwards while zooming in to keep the subject the same size as the background is magnified. It is a little gimmicky, but if you want to recreate that Hitchcock scene in your home videos, then it is good fun. There are no settings at all: unlike the Parrot Anafi, you don’t have the option to do the zoom in reverse by flying the drone forwards instead of backwards while zooming.

Zooming in also helps blur the background and isolate your subject and this is especially effective if the background is far away and you’re using the Point of interest mode where the Mavic 2 flies in a circle. The zoom makes the background speed past much faster, and can make your footage look a lot more like scenes from Planet Earth.

You’re likely to shoot in 4K for much of the time, but it’s worth noting that the Mavic 2 Zoom is limited to 30fps: it can only record at 60fps if you drop the resolution to 2.7K.

If you drop down to 1080p, you can go up to 120fps and you also get the benefit of an extra 2x lossless zoom on top of the optical zoom thanks to the extra pixels available on the sensor. That gives you an effective 4x zoom range of 24-96mm. Very handy if you’re happy to shoot at 1920×1080.

Hyperlapse is the other new feature for Mavic 2. Put simply, it’s timelapse video shot while moving, so it’s called Hyperlapse. The mode takes a series of photos at intervals you set (the minimum being 2 seconds) and offers various options including free flight, course lock, circle and waypoint.

The latter means you set a course on the map, while course lock means the drone flies in a straight line as the camera stays trained on the subject.

We hope DJI updates Hyperlapse so you can set a shorter interval as even though the drone flies slowly, 2 seconds is too long to create nice, smooth movement.

The other major upgrade is to the Mavic 2’s omnidirectional obstacle sensing. DJI is careful not to use ‘360-degree sensing’ as coverage isn’t complete, but the system means the Mavic 2 gains side, rear and top-facing sensors for detecting objects in all directions. 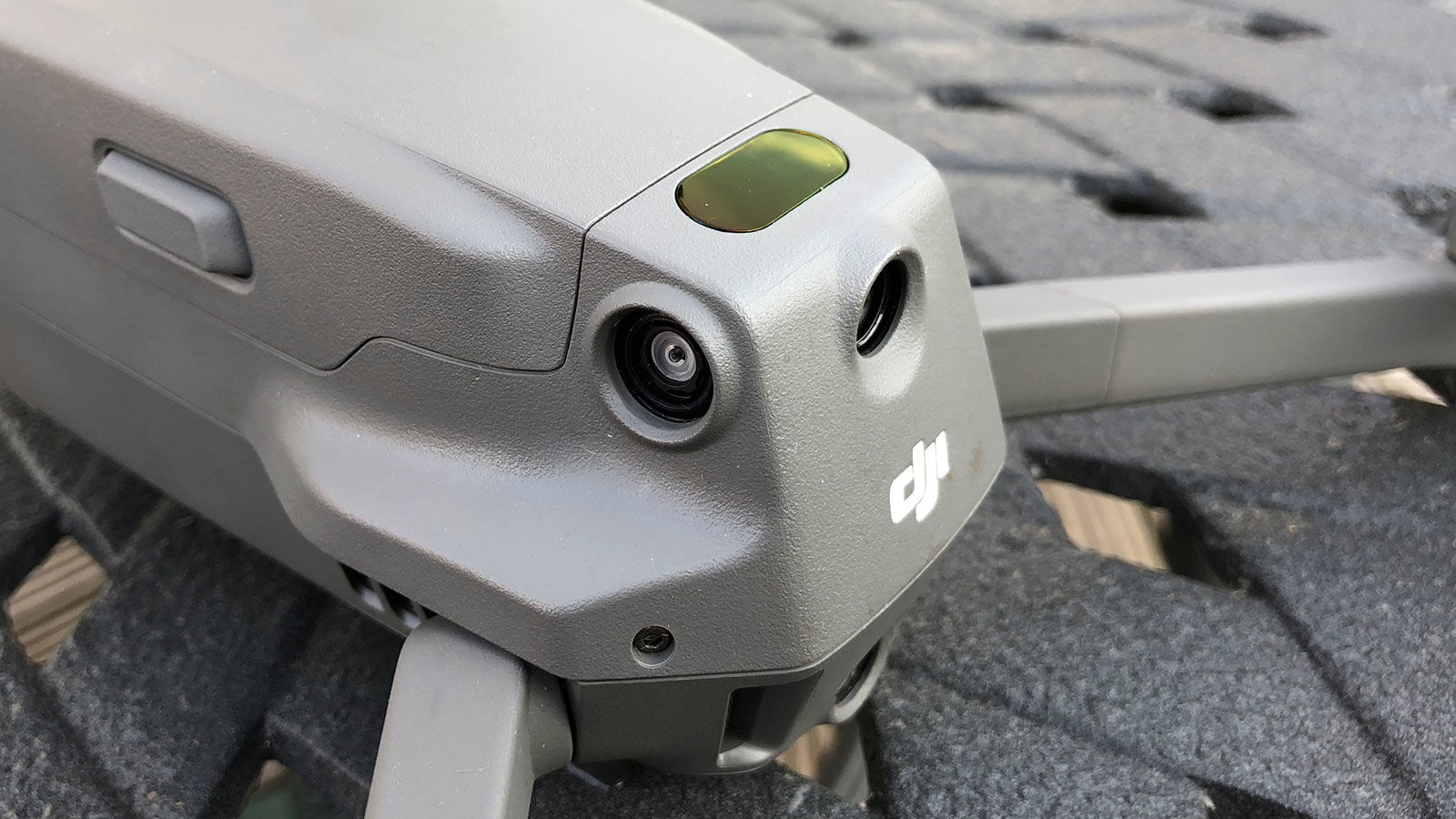 It works surprisingly well, detecting sloping ground while flying backwards and the top sensor was able to detect thin wires used for ziplines. Obviously, the sensors aren’t 100% effective and – as the app warns you – are not a substitute for using your own eyes and common sense while flying.

It also warns you that the system isn’t operational in all modes. For instance, the side sensors only work in ActiveTrack and Tripod modes. If you’re in normal mode, or Quick Shot mode, you won’t get a warning and the Mavic 2 won’t stop if there’s something in the way while flying sideways.

New underneath is a pair of LEDs which light up the landing area and are used in low light. 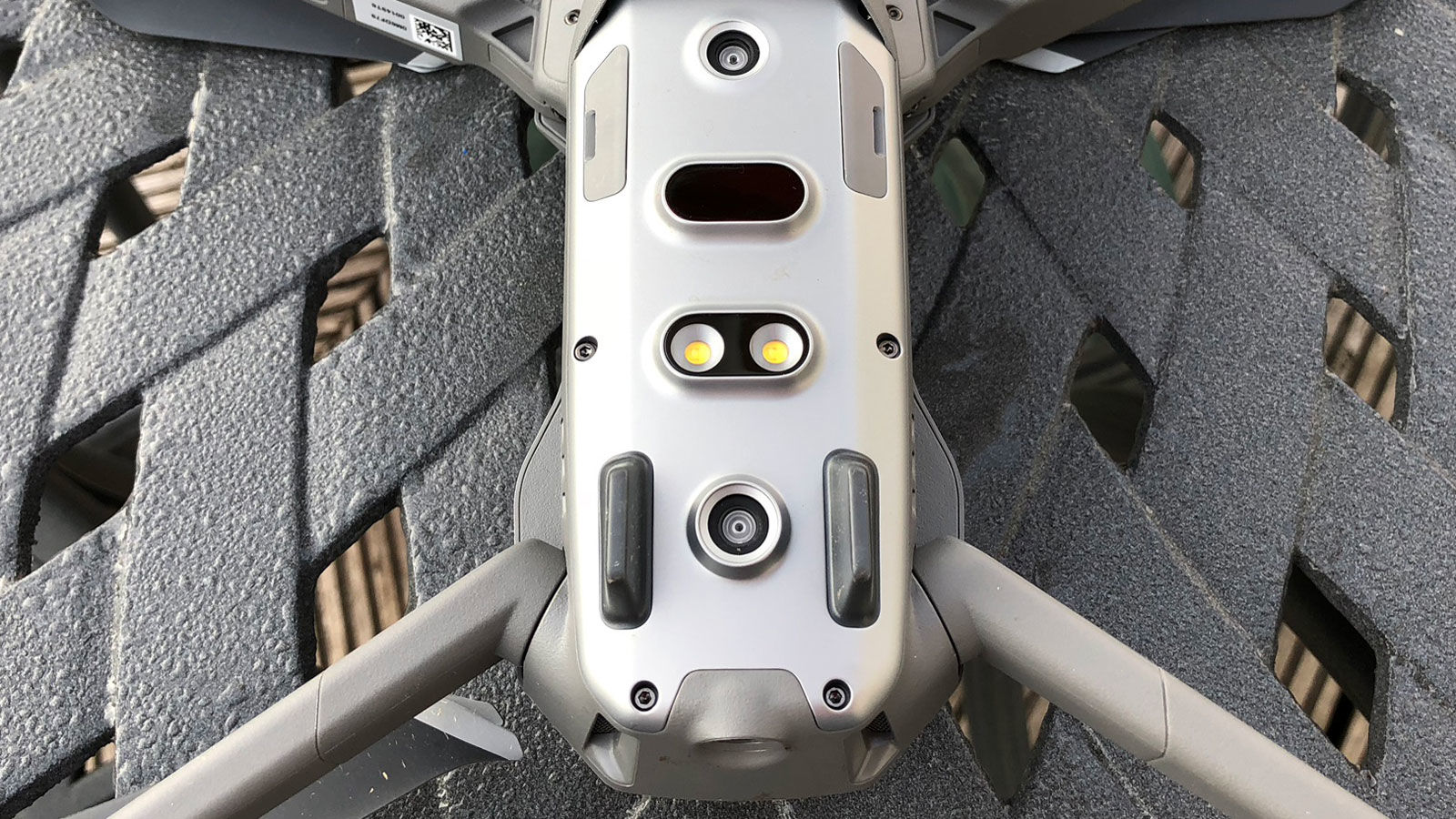 The updated controller benefits from removable sticks (like the Mavic Air’s remote) and this really helps with portability. They unscrew in seconds and are held in place with rubber clips inside the body of the controller. 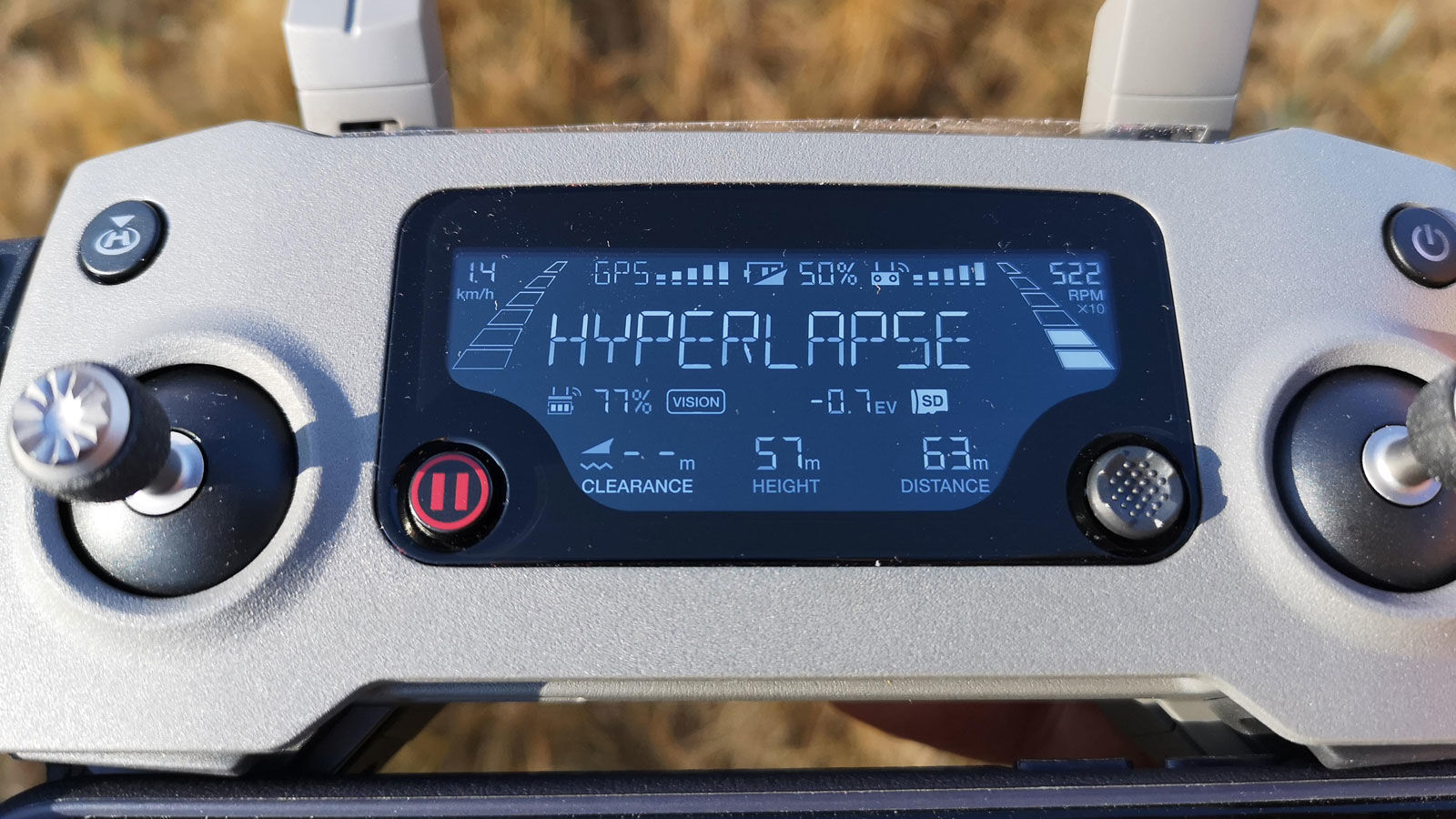 In the box you get a spare pair, plus three USB cables to suit phones with Lightning, microUSB and USB-C connectors.

As before, you can dispense with the remote entirely and fly with a direct Wi-Fi connection from your phone. However, range is severely limited compared to the 8km offered by the controller’s OcuSync 2.0 system which can still deliver a 1080p live video stream at that range.

Like all DJI drones, the Mavic 2 is very easy to fly and inspires confidence from the moment you take off. The app is well designed but could do with a ‘simple’ interface for beginners as it has grown increasingly complex as extra modes have been added over the years. 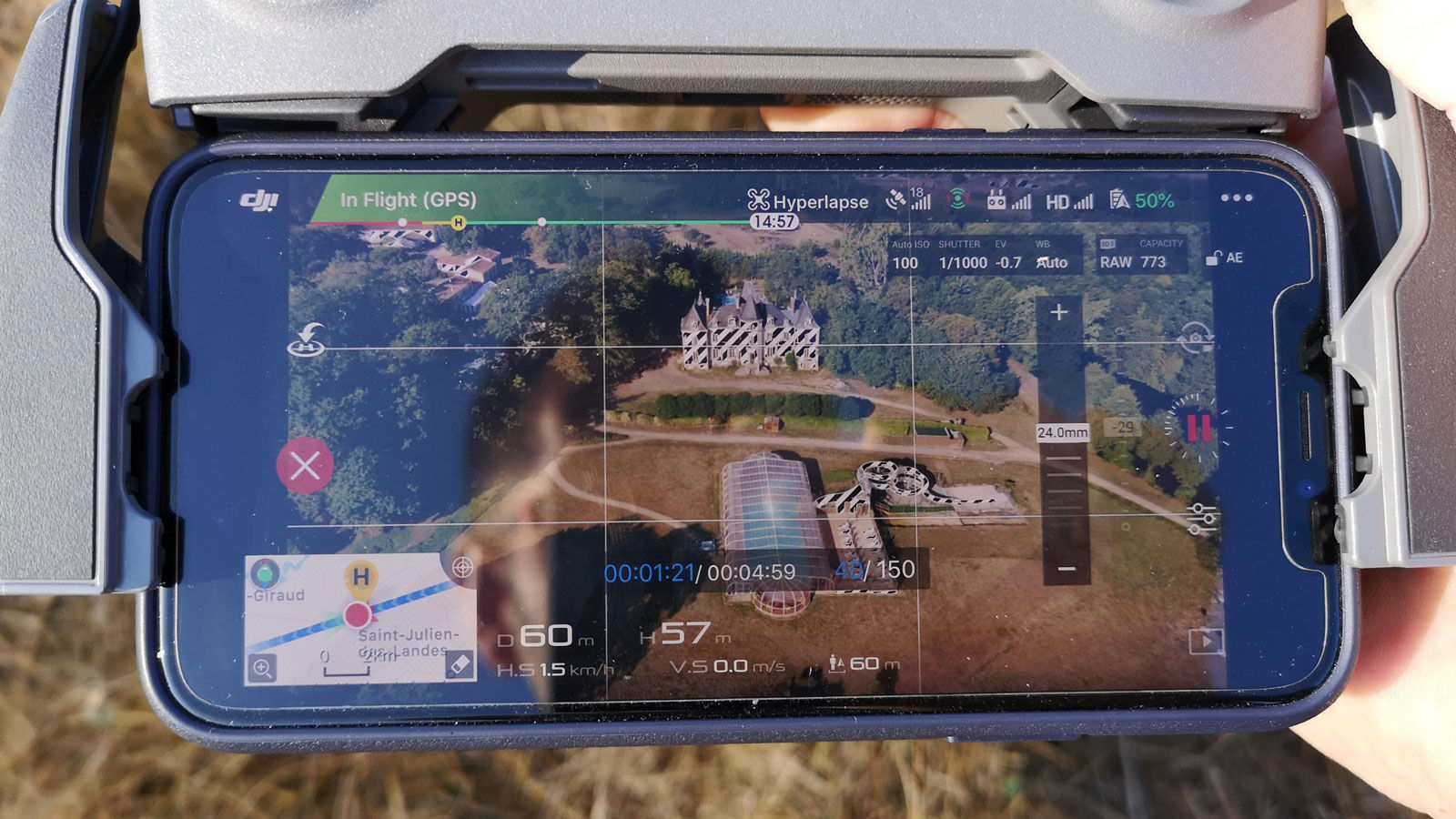 It’ll take you a few flights to understand how each mode works and become familiar with the controls in the app as well as how you can use the controller’s buttons as shortcuts to functions such as EV correction and more.

The updated ActiveTrack 2.0 system combines the 2D image from the main camera with the 3D image from the front-facing avoidance system for improved tracking of people, cars and other moving objects. It’s noticeably more effective than the old 2D-only system and puts green dots on potential subjects so you can quickly select them.

In terms of image quality, it’s excellent. The auto-focus system occasionally gets it wrong, so it’s worth downloading and watching clips on your phone or tablet before you leave the location just in case, but this happened only on one video from a week’s worth of shooting.

In 4K, video is generally sharp and detailed. The only negative is limited dynamic range, which means highlights are often blown out to white, or everything else is too dark if you expose for a bright sky.

This is one reason why you might want to spend the extra on the Mavic 2 Pro, but you lose the zoom of course.

Usefully, the app will put zebra stripes where highlights are being clipped and you can even have an on-screen histogram to help ensure your footage is correctly exposed.

Photos are generally very good. The Zoom offers the option of HDR photos, but you’ll get better shots from the 20Mp Mavic 2 Pro because of its 1-inch sensor. But you can opt to shoot in RAW + JPG on the Zoom, too, and you can extract maximum detail by processing a DNG file: there is a noticeable difference in quality between this and the standard JPG.

Unlike the original Mavic Pro, the gimbal can’t rotate to portrait mode. But you do have the option of stitching multiple landscape photos together to get a portrait aspect ratio.