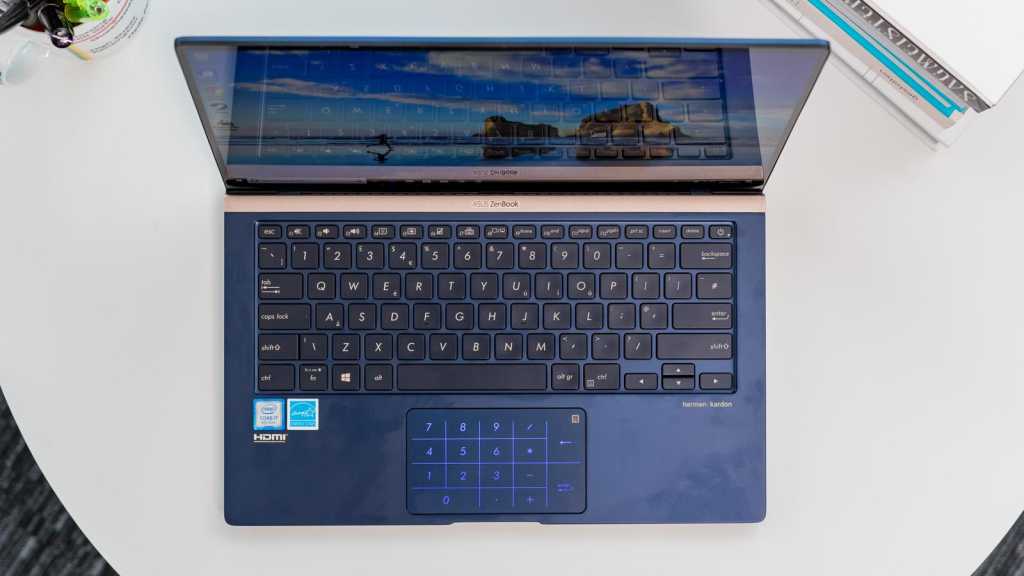 The ZenBook 14 is a very promising shakeup to the Asus laptop line. It’s smaller, lighter, and better looking than any of the previous models, without having to sacrifice either ports or powers. There aren’t many laptops around that can offer you a 14in display in a body this compact while still giving you USB-A and HDMI ports, not to mention a Core i7 processor. Unless you’re an Excel addict you can probably safely ignore the glowing numpad – it’s a fun gimmick, but most of us will probably forget it’s even there, and without tactile feedback it’s hardly a proper replacement for the keys. Still, this is a strong enough laptop elsewhere that it doesn’t need that gimmick to get by, and there’s plenty to recommend it otherwise.

The latest version of the Asus ZenBook only came out in the UK this summer, but the company isn’t wasting any time getting an updated version out, having used IFA 2018 to unveil a huge redesign to the whole ZenBook line.

Along with a total design revamp for all three models – 13in, 14in, and 15in – the two smaller versions also include one very novel new feature: a numpad built into the touch pad. We got the ZenBook 14 into the office to test out, and here’s what we think of the slimmer, lighter, and light-up laptop.

The new ZenBook 14 is on sale now, though pricing and options vary a little by market. In the UK right now you can buy it from Very for £999 with a Core i5 processor, 8GB of RAM and 256GB storage, while John Lewis also offers a faster i7 model with 8GB of RAM and 512GB storage for £1,199.

By contrast in the US it costs $1,199 on Amazon or Newegg – but this model comes with a Core i7 processor, 16GB RAM, and 512GB storage – an awful lot more performance for roughly the same price as the base UK model once you do the currency conversion. Thanks, Brexit.

Either way, the pricing is competitive – it’s just even more competitive in the US, where $1,199 is a phenomenal price for the power this laptop is packing.

If you’re interested in the other sizes, the 15in UX533 is on sale in the US now too – though it’s worth noting that it doesn’t have the touch pad numpad – while the smaller 13in UX333 is still on the way.

The ZenBook line has had a massive design overhaul over less than 12 months, and the ZenBook 14 now features smaller bezels, a new hinge, and a more compact build than any previous ZenBook.

Thanks to the new bezels and other design tweaks this is a seriously small laptop, with a 92 percent screen-to-body ratio and a build that’s smaller than most 13in laptops, let alone rival 14in models, measuring 31.9×19.9×1.59cm. It’s pretty light too, weighing just 1.19kg with the standard screen.

It’s a little thicker, at 1.59cm, but that’s still fairly slim. This is clearly thicker (and in fact heavier) than ultra-slim models like Acer’s revamped Swift 5 and Swift 7, but it also packs more ports and power into the space, so this is almost certainly a smart trade-off for most users.

There’s USB-C, as you’d expect,  backed up by a USB-A port on each side, HDMI, a headphone jack, a MicroSD card slot, and the power socket. That’s a lot of connectivity for such a slim laptop, not to mention Bluetooth 5.0, dual-band 802.11ac gigabit-class Wi-Fi, voice controls through both Cortana and Alexa, and a 3D IR camera for low-light face recognition – snugly sandwiched into the top bezel, which is always welcome.

The lid has the same circular spun metal finish as most previous models – the best indicator that this is still a ZenBook – while the rest of the body has an anodized metal finish available in either Royal Blue or Icicle Silver – though so far we’ve only seen the blue model on sale online.

Whichever colour you opt for, there’s also a rose gold trim across the Harman Kardon speakers, which sit immediately above the keyboard. We suspect some people might not like the interruption to the design, but we’re fans. It’s a subtle touch that breaks up the body, while drawing attention to the next major design change: the hinge.

All three of the new ZenBook models now feature Asus’s ‘ErgoLift hinge’, which is a fancy name for a simple hook design that helps lift the back of the laptop up as you open it. That both puts the keyboard at a (very slightly) more comfortable angle for typing and handily improves both cooling and audio performance according to the company.

There are a couple of slim rubber pads on the back of the hinge so that you don’t scuff the metal finish, but they’re small enough to avoid detracting from the look of the device when closed. And the whole apparatus – much like the rest of the laptop itself – still feels sturdy and solid. There’s no particular sense that longevity has been sacrificed for style here, and if anything the cooling benefits could help the laptop’s internals run well for longer.

Num to the touch

More interesting than the fancy hinge – though likely to actually matter to fewer people – is the ZenBook 14’s touch pad, which pulls double duty as a replacement numpad too. Most of the time it’s just a standard touch pad, but hold your finger over the top-right corner for a second or two and a full numpad – complete with basic mathematical functions – illuminates across the surface.

It then serves as a full numpad, ideal within calculator or spreadsheet apps, letting you quickly tap out sums as necessary. Activating it takes a long enough hold that you’re unlikely to do it by accident, and typing on it is quick and easy – though obviously lacks any sort of tactile feedback.

It’s a feature that will either be a complete irrelevance or an absolute lifesaver for you, mostly depending on how much time you spend in Excel, but you can always simply leave it off and forget it was ever there if numbers aren’t your thing.

As for the keyboard, it’s nothing special – it’s a pretty standard laptop keyboard with a fairly unobjectionable typing feel and a shallow action – though Asus has done a nice job of keeping it low and flat against the body of the laptop. The slightly elevated angle from the new hinge is a nice perk, but it really is barely noticeable. Oh, and it’s backlit, with three different brightness settings.

Essentially, this isn’t a top tier keyboard like you’ll find in Dell’s XPS 13 or the Huawei Matebook X Pro, but you’re unlikely to have any serious complaints.

For obvious reasons slimmed down laptops tend to require compromise when it comes to the internal specs, so it’s admirable that Asus has kept performance to the forefront here.

As we’ve said, specs vary a bit by region, but either way you’re getting an 8th-gen Intel processor, backed up by either 8 or 16GB of RAM, and 256 or 512GB SSD storage. UK and US models seem to be limited to Intel’s integrated UHD Graphics 620, but some markets also have the option of a discrete Nvidia GeForce MX150, which would give the ZenBook enough oomph for basic gaming performance too.

Our review unit is the higher spec of the two UK models, and comes with the i7-8565U, 8GB RAM, and integrated graphics (note that if you’re in the US this model isn’t available – the i7 instead comes with 16GB RAM, so should perform slightly better than this), which bears out about how you’d expect in our benchmarking tests: top tier performance on Geekbench’s CPU test, solid results on the more balanced PCMark 10 test, and much more limited results on the 3DMark graphics test.

Battery life also tested well. While Asus boast that it can last for up to 14 hours, we saw slightly less in our test: 12 hours and 56 minutes of non-stop video playback at 120cd/m2 – about 60 percent brightness. That’s not to be sniffed at though, and is up there with the category-leading XPS and Surface Laptop battery scores. It also picked up 27 percent of its charge after just 30 minutes, even while being used, so it won’t take long to top back up.

Finally, there’s the display to consider. With the bezels almost entirely stripped away, the 1920×1080 display looks the business. Unlike some rivals even the bottom bezel has been almost entirely removed, meaning the whole back panel – and thus the whole laptop – is in widescreen proportions, rather than the boxier, square design of most laptops.

The display itself is a little less exciting than its surroundings though. It’s crisp, and has a decent if unremarkable colour range, but brightness caps out at 278 cd/m2 – well short of the panels used by Dell and Microsoft, and even slightly dimmer than what we saw in the last wave of ZenBook laptops.

The ZenBook 14 is a very promising shakeup to the Asus laptop line. It’s smaller, lighter, and better looking than any of the previous models, without having to sacrifice either ports or powers. There aren’t many laptops around that can offer you a 14in display in a body this compact while still giving you USB-A and HDMI ports, not to mention a Core i7 processor.

Unless you’re an Excel addict you can probably safely ignore the glowing numpad – it’s a fun gimmick, but most of us will probably forget it’s even there, and without tactile feedback it’s hardly a proper replacement for the keys. Still, this is a strong enough laptop elsewhere that it doesn’t need that gimmick to get by, and there’s plenty to recommend it otherwise.

The only question mark is pricing. In the US this is unquestionably good value, with some serious specs on offer for just over a grand. In the UK you get lower specs for almost the same price. It’s not quite enough to make the ZenBook 14 a bad choice – you’re still getting a lot of laptop for your money – but it’s no longer the no-brainer it is in the States.