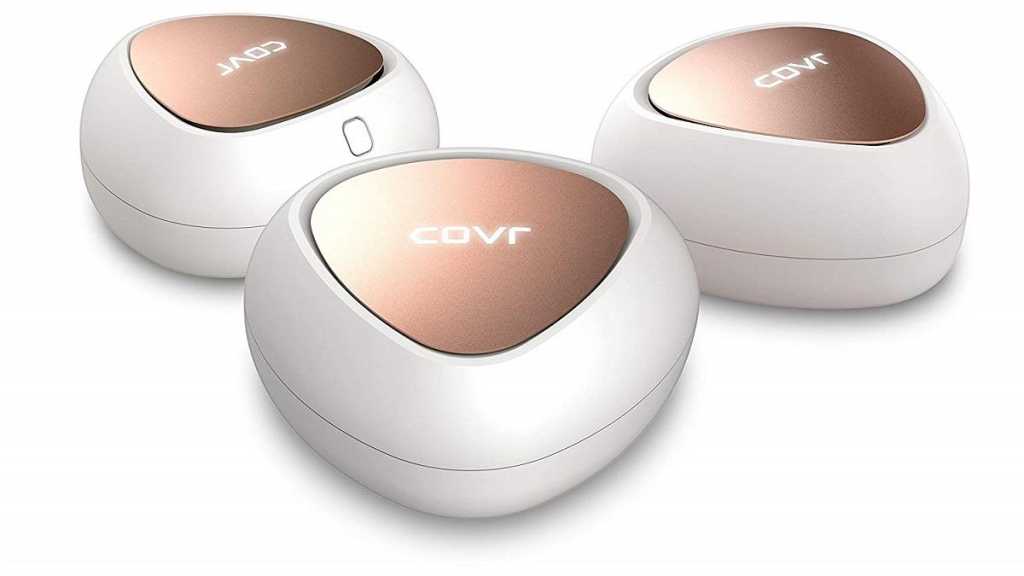 It’s a shame that D-Link’s app isn’t as clear and concise as it could be, but if you persevere you’ll find that the Covr kits provide good performance and range for your home Wi-Fi network. And with prices starting at £160 for the two-piece kit it’s also one of the more affordable mesh networking kits available at the moment.

It may be a late addition to the never-ending selection of mesh networking devices that are now available, but D-Link’s new Covr is neatly designed and competitively priced, so it’ll be a good option for many people who just need an affordable way to improve Wi-Fi coverage at home.

Its compact, curved design stands out from the dull rectangular boxes favoured by most of its rivals, but the Covr takes the same approach when setting up your home network.

Instead of relying on a single router provided by your ISP to provide a Wi-Fi signal that can cover your entire home, the Covr kits provide either two or three identical routers – which it refers to as ‘Cover Points’ – that you can set up in different rooms in order to provide wider and more reliable Wi-Fi coverage throughout your home.

And, like most mesh routers, the Covr doesn’t include a modem for Internet access so you’ll still need to connect one of the Covr routers to the existing modem or router that provides your broadband Internet connection.

There are two Covr kits currently available, starting at a competitive £159 for a two-piece kit – with the model number C1202 – which should be all you need for most ordinary homes up to around 3000sq.ft in size.

There’s also a three-piece kit – C1203 – available for around £209, and D-Link says that this will be suitable for larger homes up to 5000sq.ft, or for homes with rooms spread across three or more floors.

Read our round-up of the best mesh Wi-Fi network systems.

The Covr routers are attractively designed – vaguely triangular, but with curved and rounded edges that make them look like large pebbles rather than a conventional router. The modest price means that the Covr routers aren’t exactly top-of-the-range – they only provide dual-band 802.11ac networking on the 2.4GHz and 5GHz bands, with a claimed maximum speed of 1.2Gbps.

Hard-core gamers who demand top performance might want to pay a little extra for a faster tri-band system, but the Covr’s dual-band speeds should still be fast enough for web browsing and streaming video in most homes. 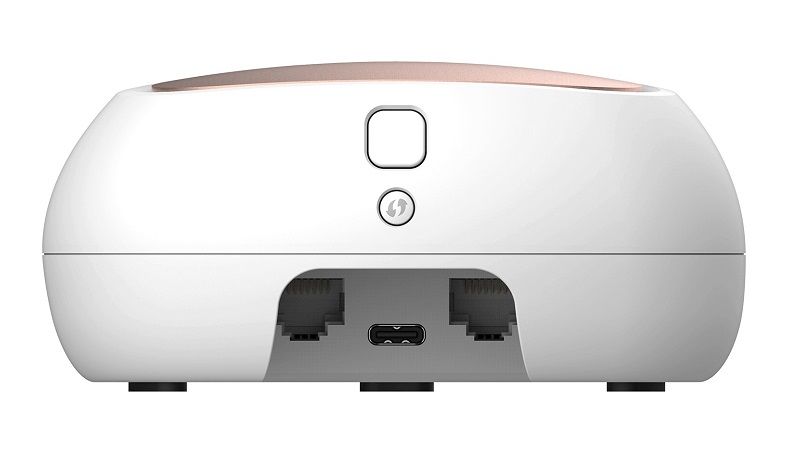 Each router also includes two Gigabit Ethernet ports for wired connections (although you’ll need to use one of those ports to connect the first Covr to your existing broadband router).

There are no USB ports for connecting a printer or hard drive that you can share on your network, but each router does have a single USB-C port that is used to connect the mains power adaptor.

The company confirmed that this was possible – but my lightweight Dell laptop didn’t seem able to provide enough power for the Covr routers, so this option might require a laptop or battery pack that can deliver a pretty strong charge.

The Covr routers are well designed, but the D-Link app that guides you through the set-up process is something of a mixed bag. Setting up the first Cover Point in my living room at home was actually very straightforward, as D-Link provides a little label with a QR code that you can scan, and this magically configures the first router in no time at all.

The app has some rough edges, though. Printing white text on a white background isn’t a very good idea when you’re trying to select menu options, and some of the icons and buttons overlapped on my iPad screen for some reason, which made it tricky to read some of the instructions. 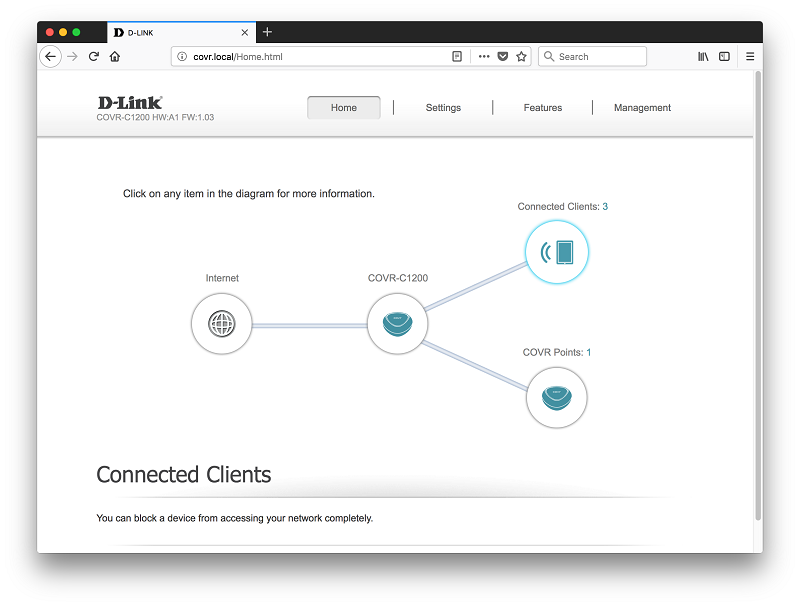 And that, of course, left us with two Cover Points sitting next to each other in the same room, rather than having the second one in the office where we needed it. At that point I decided to ignore the app, ditch the Ethernet cable, and simply move the second Cover Point into my office – where, thankfully, it actually performed very well.

The app also provides some useful additional features, such as a guest network for visitors, and parental controls that allow you to block Internet access at specific times so that the kids can’t stay up watching YouTube all night long. Even so, that initial set-up process could still be confusing for home users who haven’t used a mesh networking system before.

More experienced users, on the other hand, will be pleased to discover that the Covr also provides a web browser interface, where you can configure firewall rules and port forwarding to your heart’s delight.

However, there are still some options missing here. The Covr just creates a single named network that you can connect to, rather than allowing you to name the 2.4GHz and 5GHz networks separately, and there’s no ‘bridge’ option to link the new Covr network to your existing Wi-Fi network. 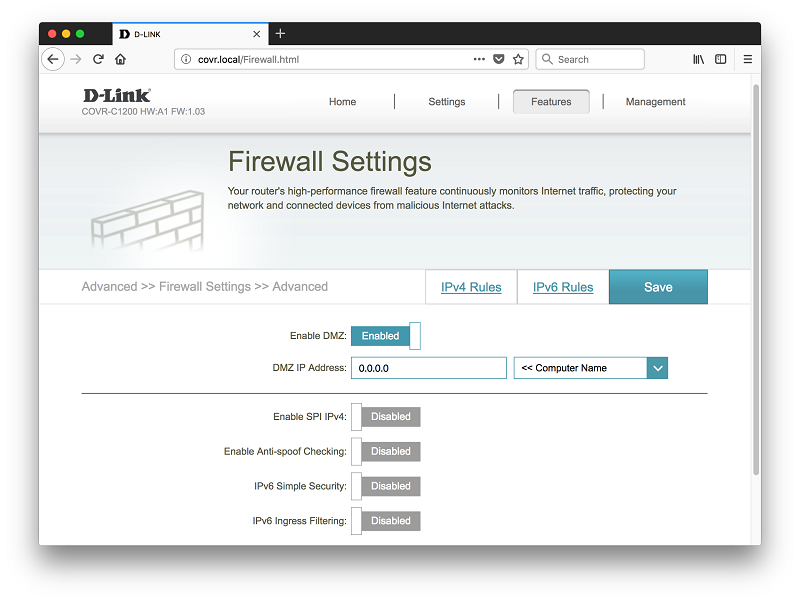 This meant that the NAS drive connected to our BT router wasn’t available on the new Covr network, and had to be moved across to the Covr instead. That’s no great hardship, of course, but it did mean that both Ethernet ports on that first Covr router were already used up.

Thankfully, the Covr’s untidy app is redeemed by the strong performance of the hardware. As we’ve mentioned, the Covr kit only provides dual-band Wi-Fi with top speeds of 1.2Gbps, but devices located in the same room as the first Cover Point recorded strong average speeds of 848Mbps.

However, it was the second Cover Point located in our office that really impressed, breezing along with consistent speeds just over 450Mbps – in contrast with our old BT router, which could barely get a Wi-Fi signal into that room at all.