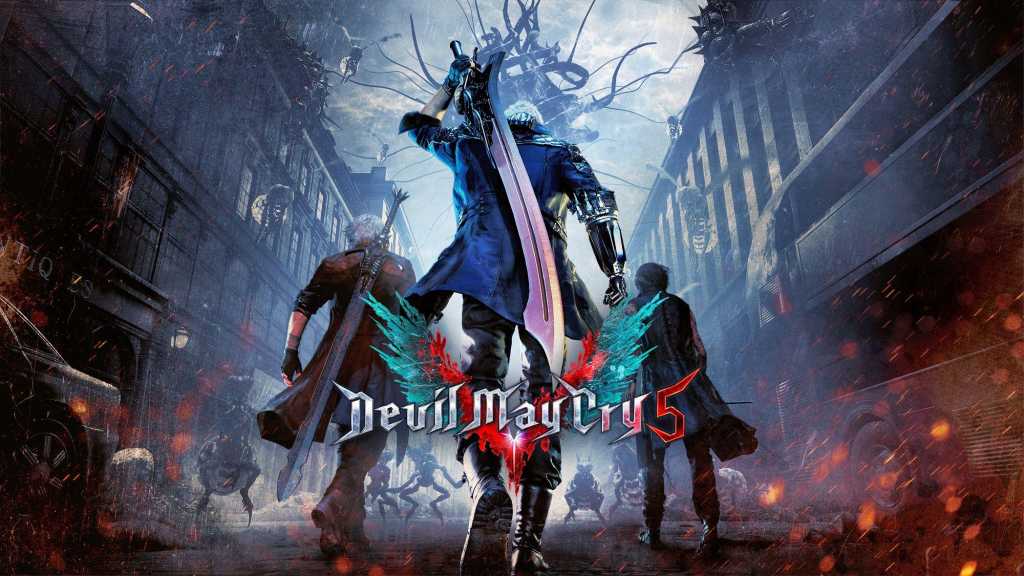 Devil May Cry 5 should satisfy your hack-and-slack itch in a big way. Huge, Hollywood-esque attacks are amped up by insane combos and devastating effects to create something truly satisfying, and the story has a lot to offer too.

It’s been a long 11 years since fans last got a proper Devil May Cry game, interrupted only by the controversial reboot /spin-off DmC – developed by Ninja Theory – but Capcom gave fans what they were looking for at E3 2018 when it revealed  Devil May Cry 5.

A proper continuation of the original series, the new game has once again been developed in-house at Capcom, with plenty of series veterans back at work to create it – even the original voice actors of Nero and Dante came back for the big reunion. 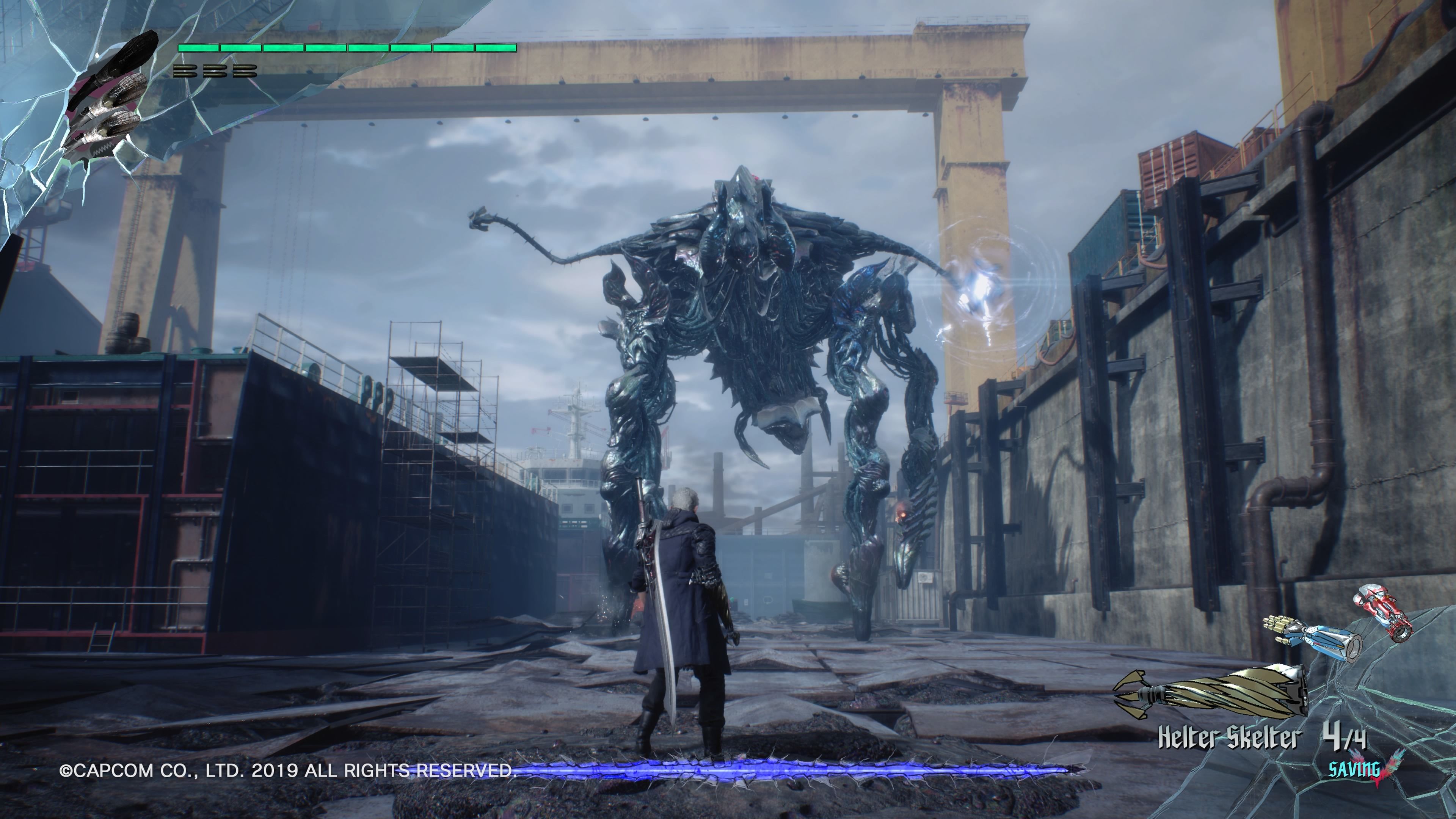 Devil May Cry 5 is a return to the main series after the controversial DmC: Devil May Cry spin-off a few years ago, bringing the series back to what it does best; hacking-and-slashing demons with style and a splash of comedy.

Dante and Nero are back, along with the mysterious V, with the aim of unveiling the mystery behind the blood-sucking demon tree Qliphoth at the centre of Red Grave City, which looks suspiciously like London – complete with off-brand tube trains, points of interest (we spotted Borough Market – or Burrow Market as it’s branded in-game) and more. We’ll post no campaign spoilers here but we will say that it’s full of twists, turns and revelations that long-time fans of the series will thoroughly enjoy, but it’s not perfect.

Once you hit the middle of the campaign, things become a bit of a slog. Environments look increasingly similar, you fight the same types of demon over and over again and there’s not much happening in terms of story. Thankfully, that’s remedied by a game-shattering twist that reignites the story and spices up combat too.

Devil May Cry 5 has three playable characters; Dante, Nero and V. You’ll switch between the three characters at various points in the campaign, which helps keep combat exciting and engaging as you pummel your way through seemingly infinite hordes of Demons. Why? Each character has a very different style of combat – and even different button combos – with varying strengths and weaknesses that you have to use to your advantage to get the coveted Smokin’ Sexy Style combo rank.

V, for example, has a completely different fighting experience to the other Demon Hunters as he’s much weaker physically and can’t get too close to Demons without taking serious damage. However, he makes up for it with a handful of shadow animals that do his bidding for him while he stays at a safe distance. While that might sound like a bit of a cop-out, V still has to get into the fray to finish enemies off – something only he can do. 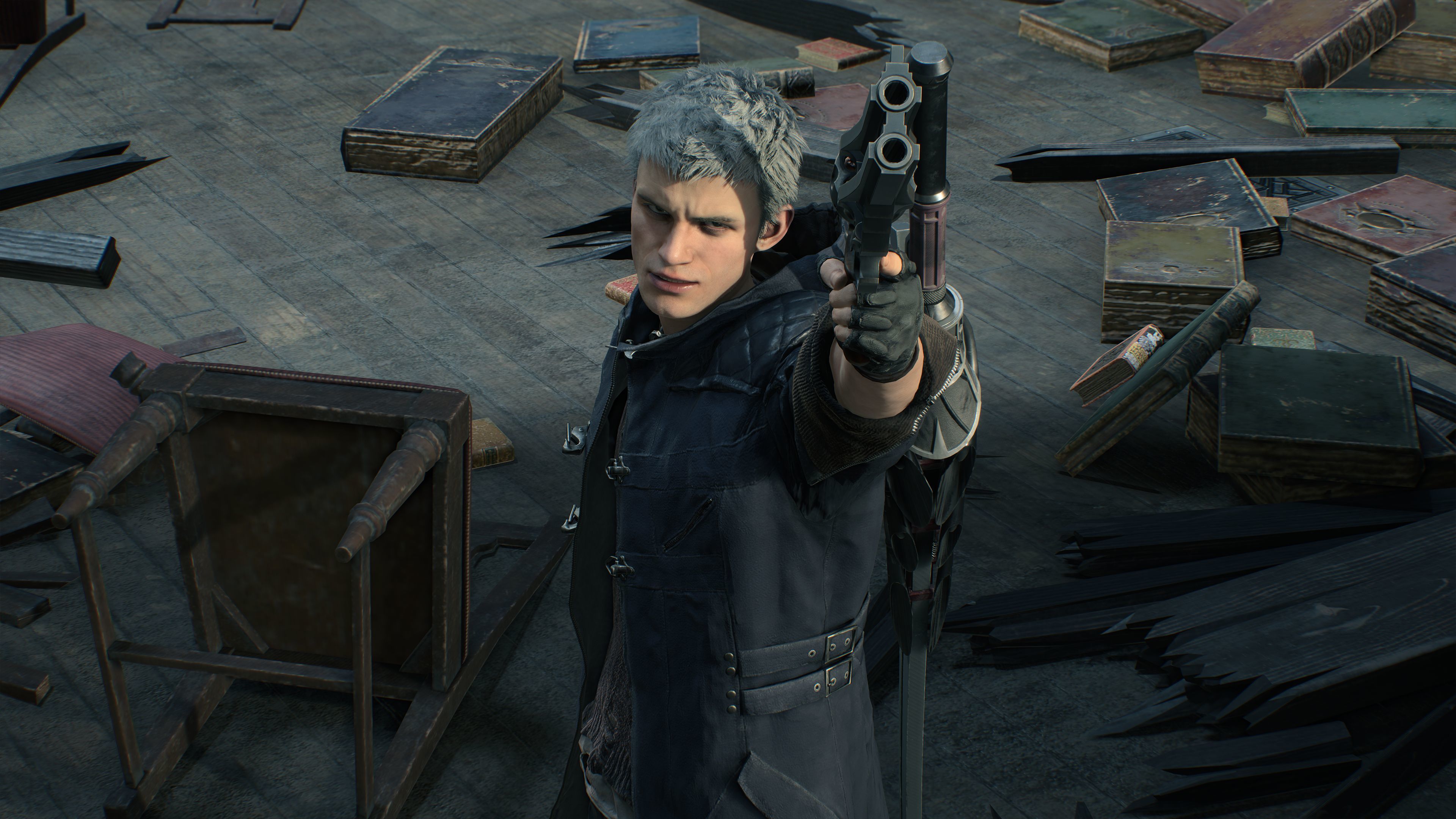 Nero, on the other hand, gets right into the action with a combination of swords, guns and an amazing collection of Devil Bringers. Devil Bringers are robotic arms new to Devil May Cry 5 that deal serious damage, but are also fragile – if you get hit mid-attack, you’ll lose the arm entirely. Thankfully you can carry a few of them, with different arms offering different styles of attack, but there’s a catch; you can’t switch between them freely.

This introduces a wrinkle of strategy to worry about mid-fight; do you resist using your Devil Bringer in hectic fights to avoid running out completely, or do you voluntarily destroy your current arm to equip a more powerful one in your inventory? It’s a decision you’ll find yourself constantly asking yourself when playing as Nero. The good news is that Devil Bringers can be replenished at various points in the campaign, and you’ll find them sprinkled throughout the environment too – you’ve just got to keep an eye out for secret areas (of which there are plenty).

When it comes to truly OTT weapons and attacks, Dante is your guy. As well as wielding fairly standard swords and guns, Dante gets access to an insane demon-infused motorbike that splits in half and can be used in battles to cause serious damage. There are other, equally-insane weapons at Dante’s disposal, but we don’t want to ruin the surprise for fans. He can also temporarily summon his inner demon, causing huge damage to any nearby enemies while restoring health and vitality. 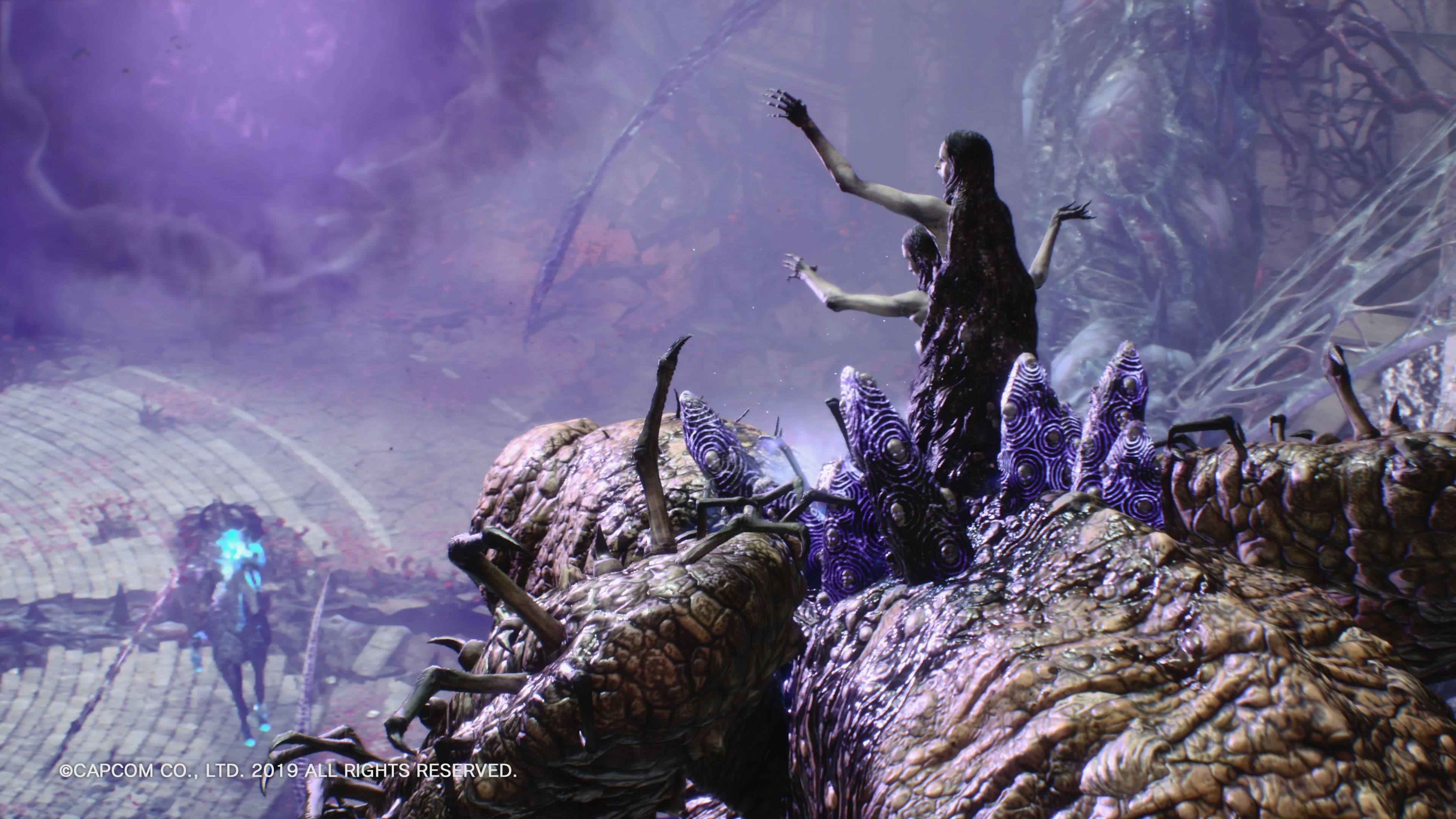 But as well as having access to a range of crazy weaponry, Dante also has four skillsets that you can switch between at any point in battle. These skillsets bring unique abilities, like being able to block almost any attack, zip around the environment in the blink of an eye or cause insane up-close damage with a sword, that can change the tide of a battle as well as boost up your style combo.

There’s incredible depth to combat when it comes to Dante, and he’s hands-down our favourite character to play with.

Combat starts off relatively simple, but it grows more complex as time goes on; as you fight your way through the campaign and upgrade each character’s unique abilities, you’ll get access to more moves, weapons and forms to really bring the pain to the Demons in style. Observation and learning the rhythm of your opponents is crucial to success, especially in Demon Hunter mode where a single blow can be fatal.

Button combinations can be confusing, especially once you’ve unlocked a whole host of additional attacks and when used in fast succession to build combos. While it’s nothing new for fans of the series, it can be a little overwhelming for newbies, but that’s why Capcom includes an Auto system to chain together various attacks and abilities to make the learning curve a little easier and more enjoyable (at the cost of blood orbs).

The game has come a long way in the 10 years since the last Devil May Cry title, not only in terms of combat but visuals too. 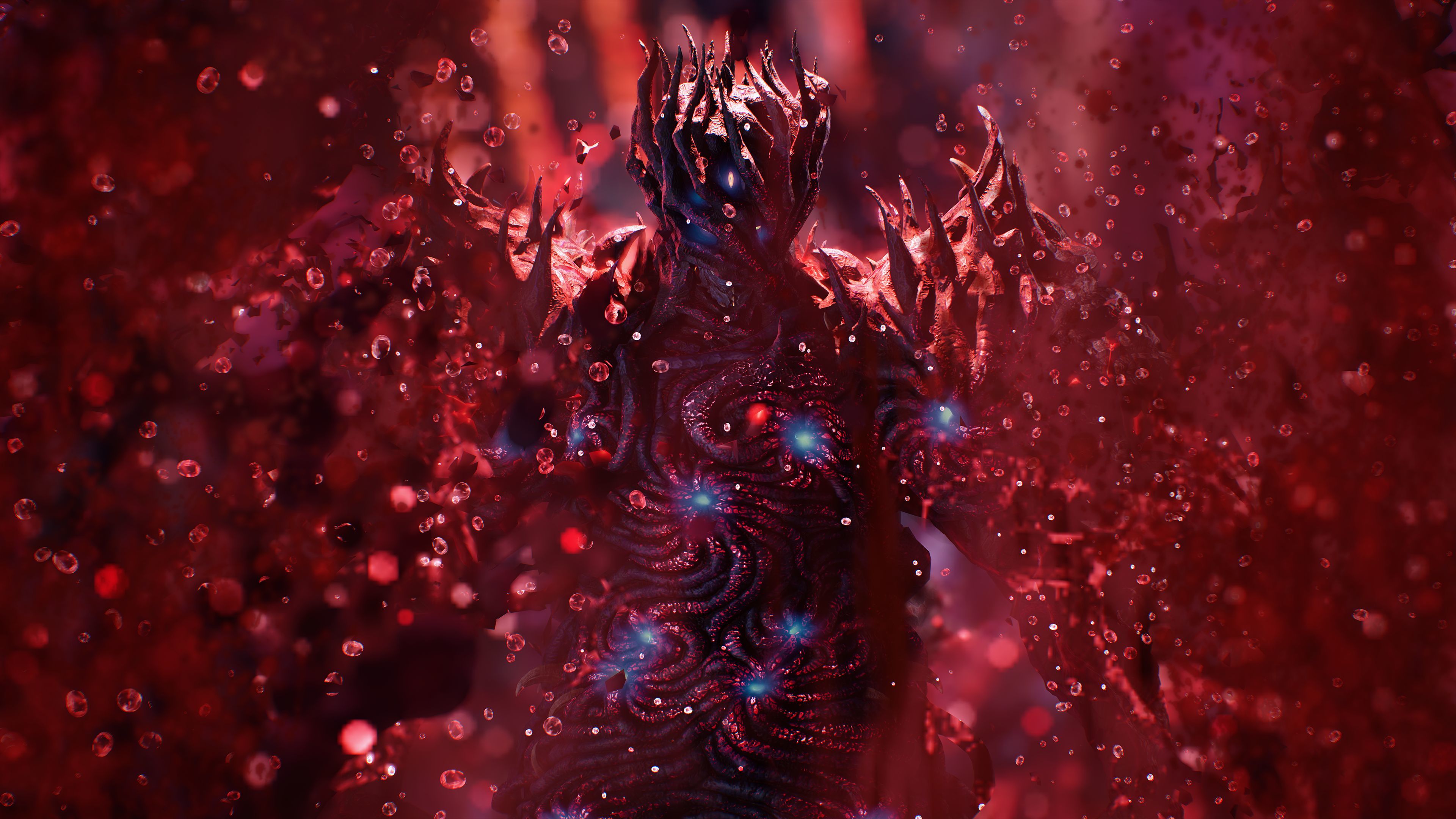 Devil May Cry 5 runs on Capcom’s fancy new REngine, the same engine that powers the gorgeous Resident Evil 7 and Resident Evil 2 remake, and despite being designed for zombie destruction, the engine handles the shift to a very different style of game surprisingly well. Animations are fast and fluid (a must for precision fighters), there are lots of pretty particle effects and impressively lifelike facial animations, but we must admit that the lip-syncing is definitely off in places.

But despite little niggles, the game looks fantastic; the Demon-infested city based on London is stunning, and that extends to demons too. Whether you’re staring into the stomach/mouth of the Goliath or being attacked by Cerberus, the three-headed demon dog, you’re in awe at how amazing (and disgusting) characters look and move.

Whether you’re new to the series or a long-time fan, Devil May Cry 5 should satisfy your hack-and-slack itch in a big way. While it can be hard to get to know the ins and outs of each character, once it clicks, it’s an absolute joy to play. Huge, Hollywood-esque attacks are amped up by insane combos and devastating effects to create something truly satisfying.

The Demon-infested environment is intricately designed, demons are varied and boss fights are a challenge. What more could you want from a Devil May Cry title?