If there’s one thing that’s clear about Resident Evil 2, it’s that it’s a labour of love. Not the kind of obsessive love that results in remakes unchanged apart from graphics, but instead a love that wants to see this classic reborn at its absolute best – with whatever changes it takes to achieve that. No doubt some tweaks will be divisive, but this is a remake done right. It’s been modernised without feeling modern, built primarily for the fans, while welcoming new players so long as they’re willing to meet it in the middle.

The Resident Evil franchise isn’t short on beloved entries (or maligned ones, to be fair) but Resident Evil 2 in particular has stuck in gamers’ consciousness as a series highlight.

That’s why it’s no real surprise that Capcom decided to give it the remake treatment, rebuilding the game from the ground up in Resident Evil 7’s engine. I’ve spent the weekend screaming from my sofa at the Resident Evil 2 remake, playing through by Claire and Leon’s campaigns to find out what’s new, what’s old, and why the hell the Tyrant won’t just leave me alone.

Out on PC, Xbox One, and PS4 from 25 January, the Resident Evil 2 remake comes with the usual choice between a standard edition and a deluxe version, which includes a few alternative costumes and the brilliant option to play with the original soundtrack. You can order it right now from Amazon in the US or Game in the UK if you’re so inclined. 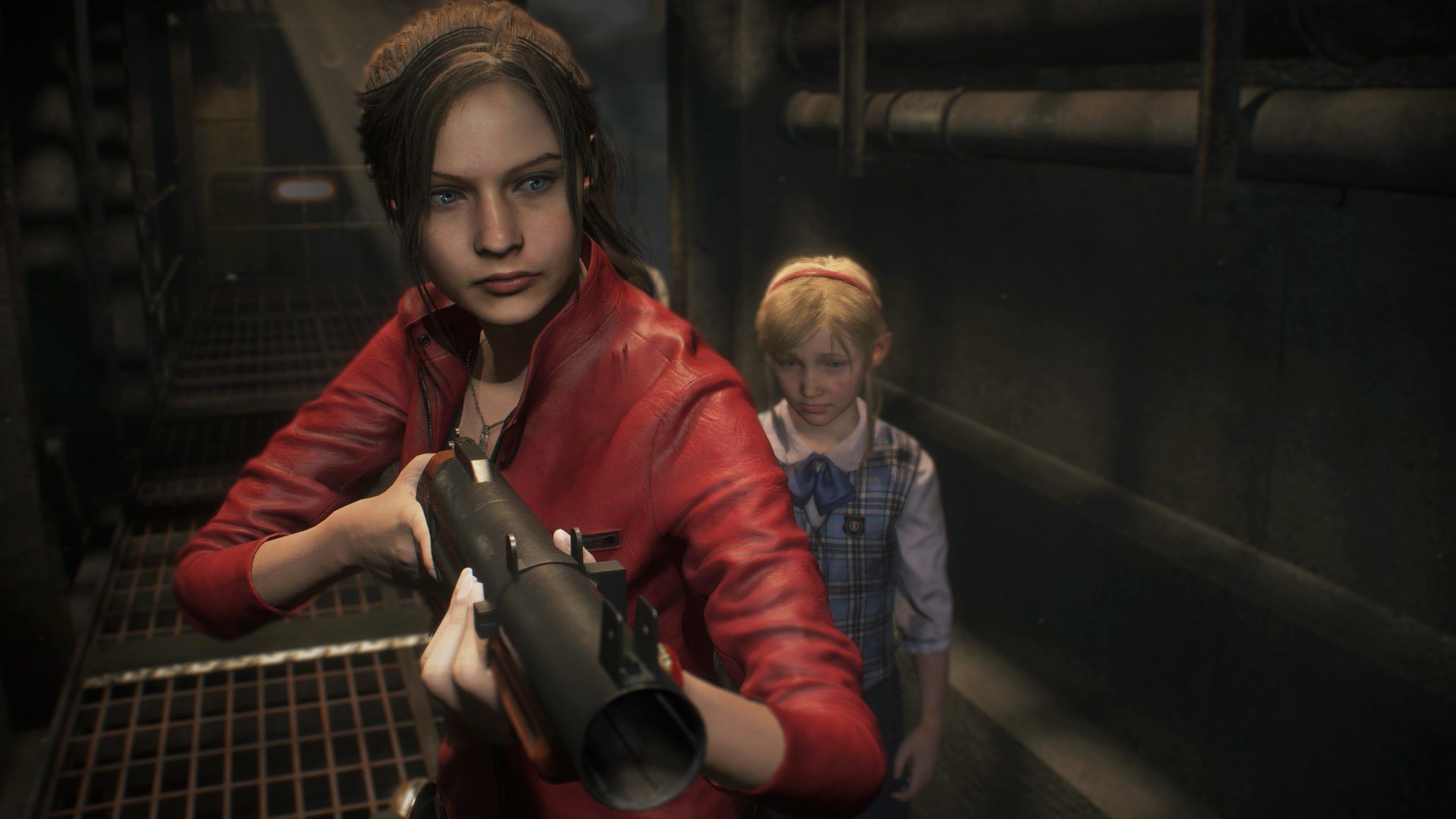 Including fan service options like the original soundtrack might suggest that this is a slavish reproduction of the 1998 original, but this isn’t quite so faithful. Sure, like the original game this features separate campaigns for the game’s two protagonists, Leon Kennedy and Claire Redfield, as they fight through the overrun Raccoon City, but each of those stories has been tweaked and improved, to both keep things fresh for returning players and improve the appeal for newer victims.

Take the Kendo Gun Shop for example. Anyone with fond memories of the original may be disappointed to run through the early game without setting foot in the store. But without giving anything away, the store (and its owner) pop up later in the story, and that new context is used to tweak the tone and content of the scene to better suit the new story.

Those kinds of changes have been made throughout the game, in ways both big and small. From the order you meet certain characters, to the way boss fights play out, even down to the nature of the story’s MacGuffins, it’s clear that every detail of the game – mechanics, music, story and more – has been questioned and considered. 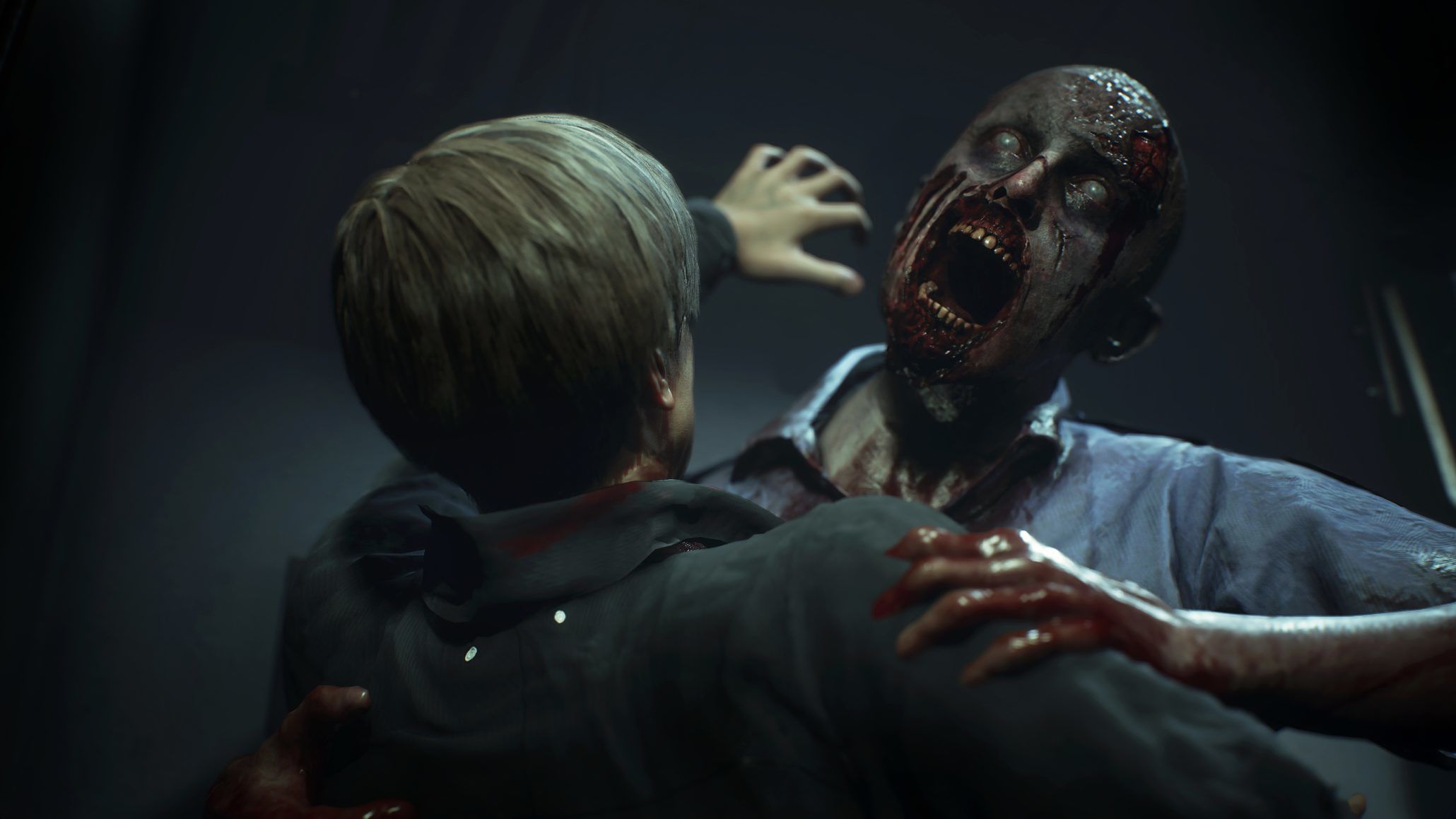 None of which is to say that it’s all new, and in fact you might be surprised by some of what’s been left behind. You’ll still heal with herbs, save at typewriters, and spend at least half of your playtime battling with the nostalgically clunky inventory system.

Those typewriters are now backed up by frequent autosaves though, and you’ll now be able to focus on fighting the undead without clashing with the controls: yup, the much maligned tank controls are gone in favour of the over-the-shoulder camera and responsive controls of Resident Evil 4.

I have a soft spot for the old Resi system, which made up in tension and claustrophobia what it lost in accessibility. The fixed camera angles always held the possibility of something or other lurking just out of sight, and the fear was heightened thanks to the knowledge that just trying to turn around and run away would probably take you about half a minute.

Still, there’s a balance here, and this remake feels just as grounded in horror as 2017’s Resident Evil 7, rather than a return to the action games of the series’ nadir. Claire and Leon are still slow – agonisingly so when you’re trying to sprint down a corridor to the percussive rhythm of the Tyrant’s footsteps behind you – ammo is tight, and zombies are plentiful. Not in a ‘kill them all!’ way, but in the proper ‘panic and run and hope’ because there are way too many of them to manage kind of way. 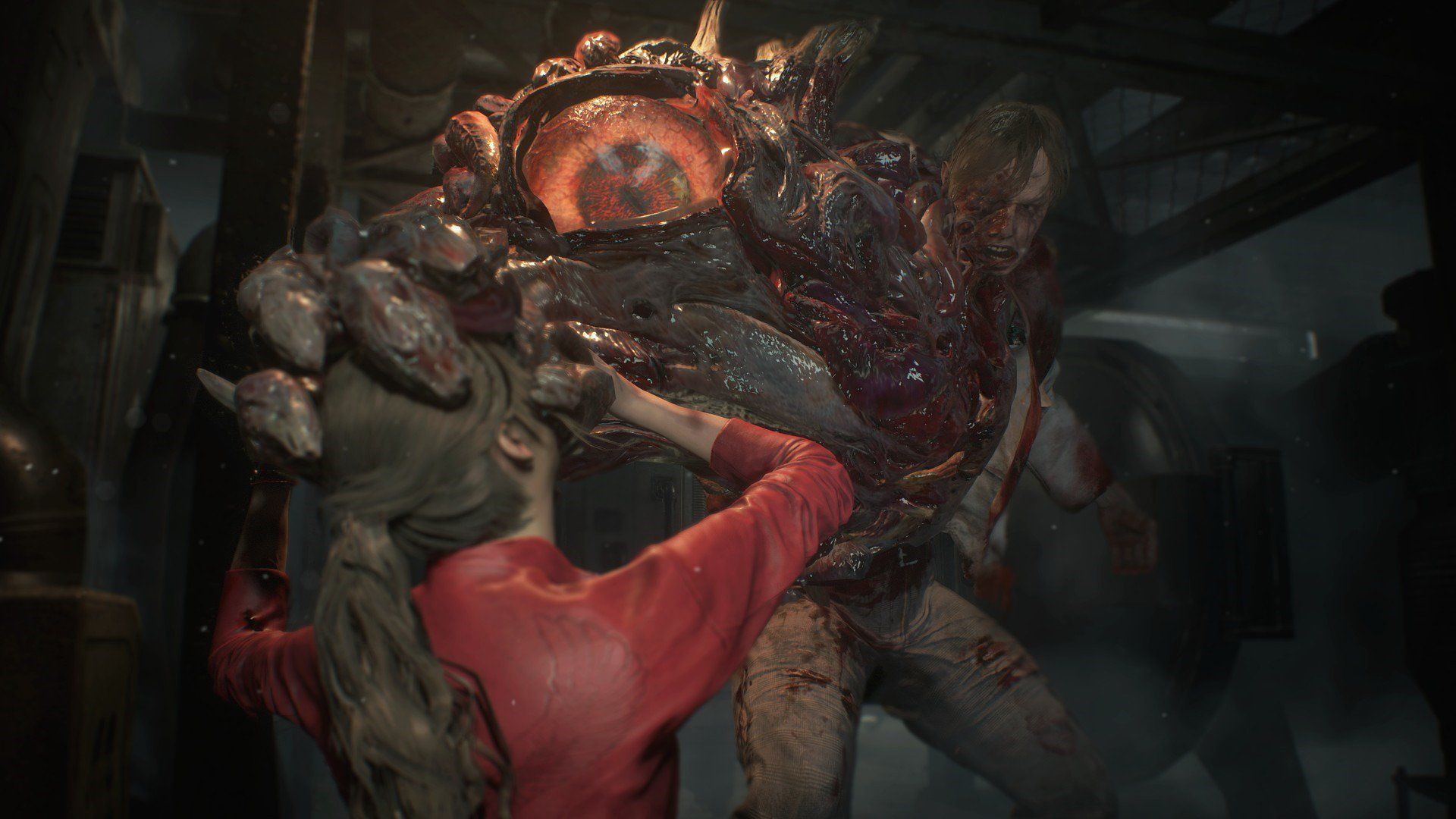 Shiny new graphics add realism to the horror, but as always it’s the enhanced audio that really matters: you begin to obsess about every creak and footstep, the pounds and shrieks of the soundtrack blurring together with the creatures that stalk the police station, sewers and streets of the city.

The graphics do come into their own too though. Aside from adding a lush sheen to the whole game, they bring entirely new life to the characters with facial animations that are another step up from Resident Evil 7. It’s let down a bit by the voice acting – Capcom has drawn recent criticism for the decision to save money with non-union actors, rather than reuniting the original cast – but hammy vocals are as much a staple of Resident Evil as confusingly themed keys, so it’s easy to forgive in the end.

Much was made ahead of release of the developers’ suggestion that the remake would no longer feature four different versions of the campaign, but it looks like that was either a case of mistranslation or something changed. Once again you have the choice to play through once as Leon or Claire – with the same basic puzzles, but different weapon options and cut scenes – and completing the game once then unlocks the ‘Second Run’ option, a remixed campaign that lets you experience the events of the original playthrough from the other character’s perspective.

That means you’ll at least want to play through the game twice – doing the second run with the other character offers you new weapons, puzzles, story sequences, and more – while the hardcore could play through four times or more, so the game’s not short of replayability. Extra game modes – where you play as fan-favourites Hunk and, uh, Tofu – also appear, so there’s plenty to do. 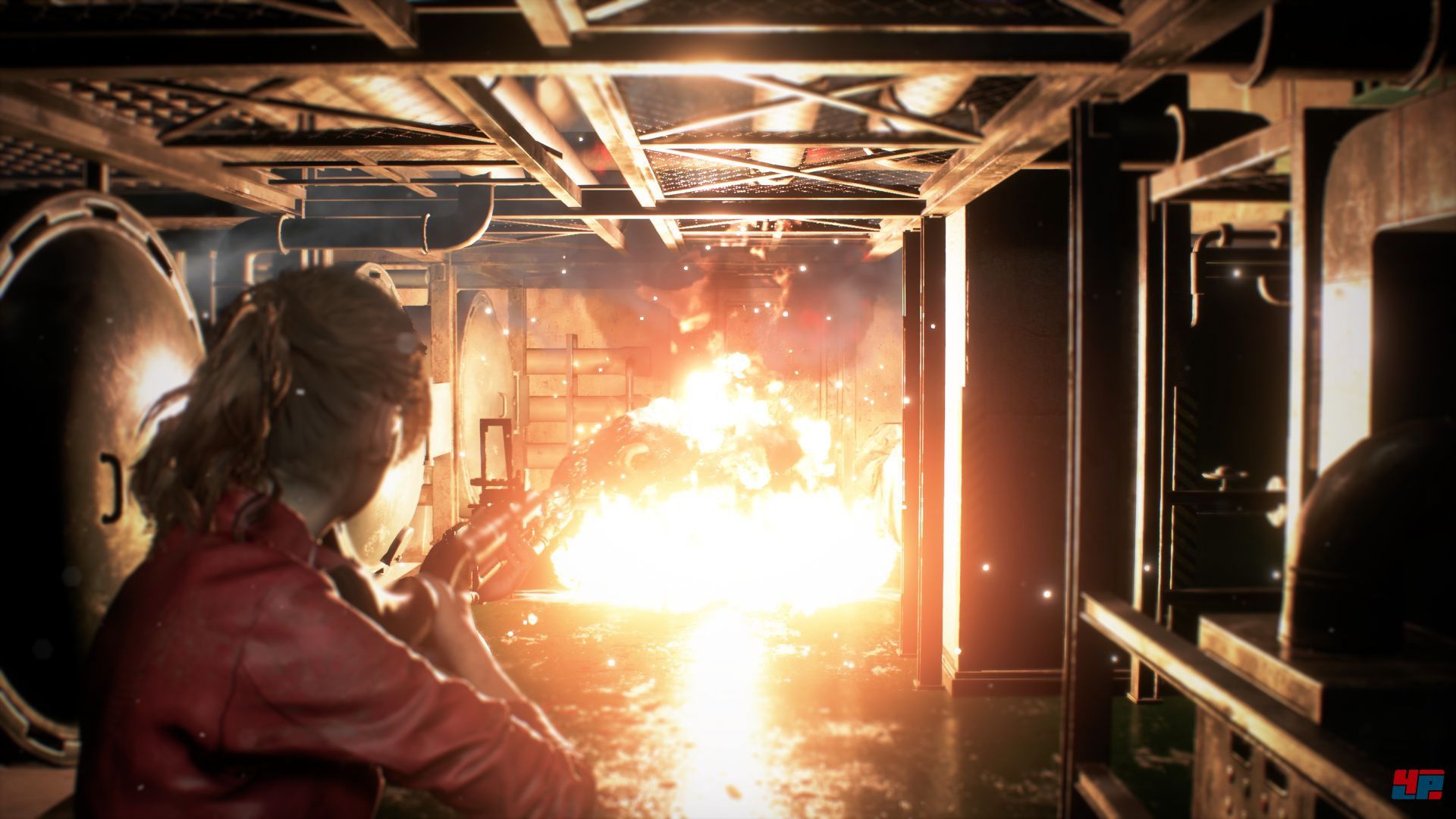 If there’s one thing that’s clear about Resident Evil 2, it’s that it’s a labour of love. Not the kind of obsessive love that results in remakes unchanged apart from graphics, but instead a love that wants to see this classic reborn at its absolute best – with whatever changes it takes to achieve that.

No doubt some tweaks will be divisive. There are already fans lamenting the loss of tank controls; the plot changes will ignite a whole new wave of arguments about the canon; and expect a lot of people asking why they couldn’t just improve the bloody inventory.

But broadly, this is a remake done right. It’s been modernised without feeling modern – you will remain acutely aware that this was a game first designed in the late ’90s – built primarily for the fans, while welcoming new players so long as they’re willing to meet it in the middle.