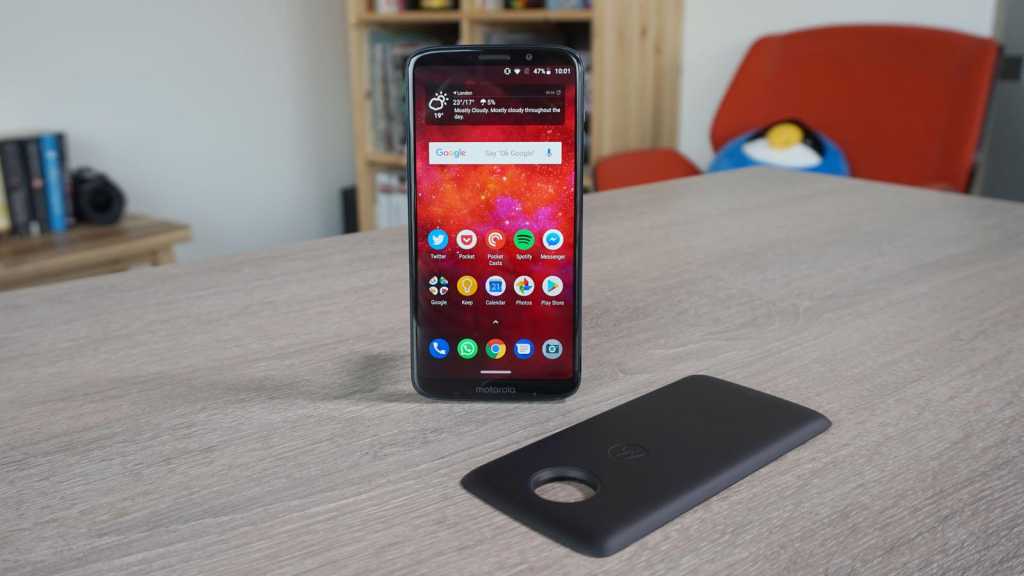 The Moto Z3 Play is a charming but frustrating smartphone. Moto has improved the design, the display and the software from the past couple of years but then maddeningly taken away the headphone jack and the outstanding battery life. The price is now higher and for practically the same money you can get a OnePlus 6 that is better on most fronts and has a headphone jack. And given that Moto Mods are likely nearing the end of their lifecycle, it makes the Z3 Play hard to recommend, even at launch. If you must have Moto, then this is the best Moto phone you can buy in 2018. But where once these Play phones were genuinely unique, the Z3 Play is merely OK.

After buying and rescuing Motorola’s phone business, Lenovo went all-in on modular design. 2016’s Moto Z introduces Moto Mods, the snap-on accessory ecosystem that gave you a speaker, extra battery or even projector if you wanted it.

Two years later and Moto is onto the third generation of Moto Mod smartphones. It’s great that accessories two years old work with the latest crop of Moto phones, but the Z3 Play is a hamstrung device compared to the Z2 Play and even the original Z Play.

The ‘Play’ moniker refers to the mid-range version of the Z range and has stood for mid-range specs but with similar design and superior battery life. That’s not so clear cut anymore, and while the Z3 Play is a perfectly serviceable phone, the loss of headphone jack and battery life doesn’t make sense on a phone of this price.

The Z3 Play moves to the now-familiar 18:9 screen aspect ratio for the first time on a Moto phone, and it’s a generous 6.01in. This is good news as the bezels on the Z2 Force and Z2 Play were too big.

You can still clip Mods onto the back of the phone, which highlights how little the design has been able to change over three generations. The back of the phone has to be the exact same dimensions as its predecessors with the round camera bump and magnetic pins in the same places as usual.

This leaves Moto little room for manoeuvre, but it’s annoying that it has made the Z3 Play fully glass on the back. Without wireless charging here, it serves to make it more breakable and more prone to greasy fingerprints.

And because of the new taller display Mods it wants you to use, the fingerprint sensor can’t be on the back so it’s now on the right edge. The sensor works well but is not a button, so the power button is on the left. We found that holding the phone naturally in our right hand meant accidentally unlocking it with or thumb more often than not, like when putting it on our right pocket.

But it’s not all bad! In fact, the Z3 Play is a very well-made glass and metal phone in a lovely deep indigo colour that we vastly prefer to the lighter blue Honor cakes all its phones in. Despite the same shape as older Z phones the taller display fills it out more, with attractive curves and good, clicky buttons.

The phone now bears ‘Motorola’ branding on the bottom chin, a subtle change from the ‘Moto’ branding normally used on the phones. It sits in-between two mic dots.

Like every other Moto Z-series phone, it still feels a bit odd without a Mod given the hard edges and necessarily totally flat back panel. It’s a shame there’s no Moto style shell in the box like there was before.

You do get a battery mod in the box this time though, which is good and bad – we’ll get to that. The phone isn’t IP rated, and is only splashproof.

At 6.75 millimetres thick and 156g it’s quite pocketable but loses the headphone jack. This is very annoying especially as the Z2 Play managed to fit one in its 6mm frame. No headphone jack on a mid-range phone, even in 2018, is pretty criminal.

If the ‘Play’ name once stood for an entertainment focussed phone that lasted all day, the loss of the jack goes against that. It turns out the battery life joins it in the doghouse.

The Moto Z3 Play struggles to justify its high price tag when you look at the features and performance. It’s by no means a dud of a phone, but it is not as outstanding in its niche as the Z2 Play was.

The Play series continues to used AMOLED rather than LCD displays, and it’s welcome. The 6.01in 2160×1080 panel is punchy and well calibrated if a tad oversaturated, but adjustable if you want to tinker.

It’s Gorilla Glass 3, which should keep scratches at bay but it doesn’t have the unbreakable Shattershield of the Z2 Force. The good trade-off is excellent touch response – the best we’ve seen on a mid-range device.

It’s also surprisingly decent in direct sunlight. But the best part of the screen, like many Moto phones, is the always on display. Activated with a wave of your hand over the phone (great when on a table) it displays the time and icons from any apps from which you have notifications.

Pressing and holding on an icon allows you to view, and then drag the icon to app-specific actions. It’s brilliant, and we miss it on other phones.

Moto Display also has Attentive Display, which keeps the screen on while you’re looking at it, and the usual blue light filter for night time viewing.

The Z3 Play runs on a Qualcomm Snapdragon 636, the same chip found in the Asus Zenfone 5. It’s a mid-range processor that has allowed mid-range phones to support Full HD+ displays.

This is paired with 4GB RAM and 64GB storage – generous, but standard for 2018. A microSD card slot allows expansion up to a further 512GB. It’s also a dual-SIM phone, but you’ll have to decide between a second SIM or a microSD card as they use the same slot.

In our extensive testing we have been thoroughly impressed with the performance on offer. The phone barely stutters, even when multitasking between tens of apps. Even graphically intense games run well, and unless you are pushing your phone to within an inch of its life there really is little real-world difference between the Snapdragon 636 and the high-end 845.

We benchmarked the Z3 Play using the Geekbench 4 app that scores the power behind the processor and how it’s integrated into the phone. We also score on four different GFXBench tests that look at the display and how graphics render, and finally Jetstream, which scores browser performance.

The below chart compares the Z3 Play to the Z2 Play, the much cheaper Moto G6, the Zenfone 5 as it has the same processor and the Nokia 7 Plus as it achieves better scores but has a better processor and costs less at £349.99:

These scores are great for the Z3 Play and show the performance of a flagship phone from less than two years ago. But given the efficiency of the 636 chip paired with a decent 4GB RAM, the Z3 Play runs excellently.

With no headphone jack, it’s laughably annoying that Moto bundles the phone with headphones that have a 3.5mm jack. In fact, we couldn’t quite believe it. Add to that the included 3.5mm dongle, it seems like a confusing slap in the face as the company that took away your jack at the same time admits you still need it. It’s crazy.

The in-ear headphones are cheap and not much to write home about, but at least they’re included. Don’t lose the dongle, as it’s more useful to use with a better set of headphones.

The single speaker is in the earpiece and is perfectly serviceable, but doesn’t get very loud It’s what you’d expect from a phone of this price. Call quality through it is good though

If you’d prefer to use Bluetooth, there’s Bluetooth 5.0 and aptX – basically the best you can get right now. NFC for mobile payments is also present.

A beta feature called Moto Voice lets you set up voice commands for certain apps, but it’s still as odd or as personal as using a voice assistant. If the latter appeals, then Google Assistant is built in.

An upgrade on the Z2 Play, the Z3 Play has dual cameras. The 5Mp second lens is purely for depth sensing, not zoom, meaning portrait mode is possible. The main sensor is f/1.7 12Mp and is good for images in daylight.

You can record 4K video too, but as with stills, it’s noticeable that there’s no image stabilisation, a feature only found on more expensive handsets.

Portrait mode photos are a bit hit and miss, but are pleasing for a mid-range phone. You can also get portrait photos from the front-facing 8Mp camera, but results are less than impressive as Moto’s post processing is nowhere near as good as Google’s.

It’s cool though that Moto has integrated Google Lens right into the camera app. It’s still in the early stages of being useful, but point it at places, object and shops and you can quickly find out more information.

And so to the most disappointing aspect of the whole phone – and all because its predecessors were so good at it. The Z Play launched in 2016 with a 3510mAh battery and mid-range specs. Its battery life was outstanding – by some report, three days.

The 2017 Z2 Play was a bit less impressive with a 3000mAh battery, but was still good for well into two days. The Z3 Play keeps a 3000mAh cell but with a bigger screen to power and more demanding processor and RAM, the battery life is good for only one day.

It’s still better than most high-end phones, and in normal use we went a whole 24 hours between charges. Even a particularly heavy day saw us going to bed with around 30%. But when the whole USP of the Play series was never worrying about battery, it’s a step backwards. The longest we got out of the phone was three and a half hours of screen on time over 25 hours.

Fast charging is also brilliantly quick, with the bundled charger giving 54% in 30 minutes.

Moto’s software is close to vanilla Android, if not Google’s current imagining of the OS. The Z3 Play ships with Android Oreo 8.1 and opts to use Google apps for everything when possible. It’ll probably get an update to Android Pie, too.

Excellent additions include the Moto Display already mentioned and the option to use Moto’s own navigation bar instead of the normal Android back, home and recent apps buttons. Using just a line at the foot of the screen, you tap to go home, hold for Google Assistant, swipe left to go back and swipe right for recent apps.

It’s blissfully simple and the best implementation of one button nav we’ve seen – yes, better than Google’s. There are other neat additions like a double chop of the phone to turn the torch on and off, and a double twist in the hand to open the camera.

A face unlock feature is also fast and we found it preferable to the fingerprint sensor – though remember it’s not as secure as Apple’s Face ID.

The Z3 Play will probably be Moto Mods’ swansong. The battery life that the Z Play and Z2 Play here is lacking, but it’s still a refined, attractive smartphone, despite the loss of the headphone jack.

It’s good to get the battery mod in the box, but it’s also a tad too expensive considering you can pick up a OnePlus 6 for practically the same price – a phone with much better specs.