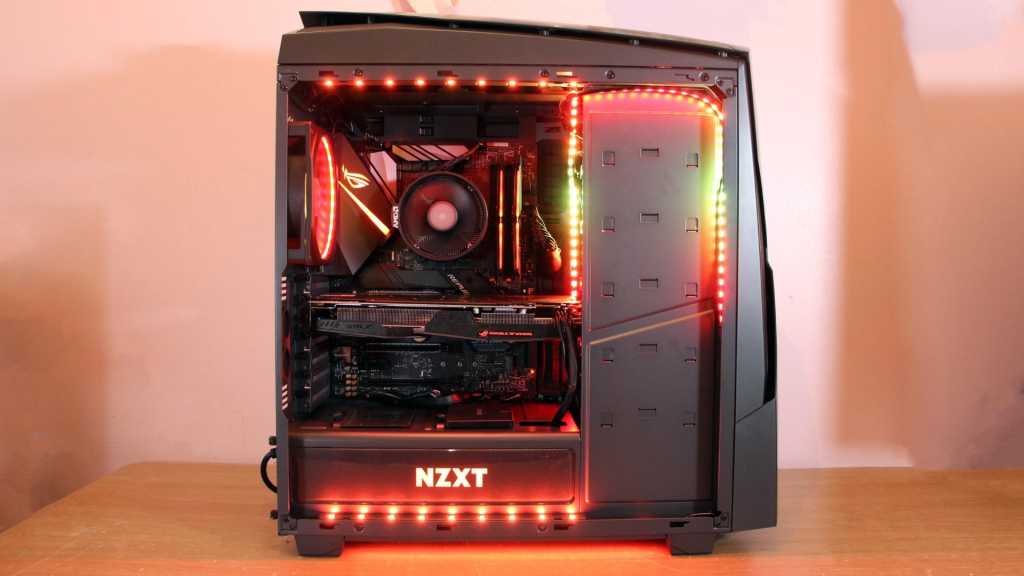 There’s a lot to like about the Overclockers UK Radiance RZ. The NZXT Noctis chassis is good-looking and well-built, with solid features and loads of RGB LEDs. The motherboard and memory are better than the equivalents you find in most PCs at this price, and Overclockers UK has done produced a rig that’s quiet and reasonably tidy. A mouse and keyboard are included, too. However, the extra budget spent on those aspects of the machine impacts performance elsewhere. While the mid-range Ryzen and overclocked GTX 1060 are fast enough for gaming and day-to-day computing, many PCs do offer more power inside duller designs. In the end, then, it comes down to priorities. If you want a well-balanced machine with a high-quality case and loads of RGB LEDs, then the Overclockers UK Radiance RZ is ideal. If you’re keen on some more computing power, look elsewhere.

The latest machine from Overclockers UK represents the first salvo in a partnership between the Staffordshire-based firm and Asus – and that means you get loads of good tech, but a hefty weight of expectation because of each company’s respective reputations. Find out the result in our full Radiance RZ review.

As usual, the specification can be altered. You can pick from beefier processors, meatier graphics cards, alternative storage options and additional components like sound cards and Wi-Fi modules.

For a gaming PC, the price of £1,499 won’t break the bank, which bodes well for this mid-range gaming desktop – but it also brings the Radiance into a particularly busy area of the market.

The Acer Predator Orion 9000, for example, is a whopping £2,999. See more options in our best gaming PC chart.

The Asus influence can be seen as soon as the chassis is heaved from its box. The NZXT Noctis is a ROG-branded case (republic of gamers) that comes in an exclusive shade of gunmetal grey and with Asus logos on its side panel.

The grey finish looks great, and the Noctis has eye-catching design elements. The front panel mixes angled panels of plastic with dark mesh that allows three 120mm fans to pull air into the case. At the top you get pairs of USB 3.0 and USB 2.0 ports alongside more angled plastic and mesh, and the side panel provides a plastic window. Every material used throughout is sturdy.

The Noctis case continues to impress on the inside. The interior is ringed with RGB LEDs, and the 140mm exhaust is hooked up with coloured lights. The graphics card, motherboard heatsinks, memory sticks and the PSU shroud’s NZXT logo are all decorated with lights.

Overclockers UK’s partnership with Asus means all the RGB LEDs can be connected using the Aura software. This can be controlled from Windows, and allows the system’s lighting to be managed – so you can have different colours, static shades, animated patterns or responses to your PC’s temperature or activity.

Smartly, Overclockers has also included a small box on the rear that can cycle through colours and patterns without the need for software. And, behind the motherboard, you’ll find a couple of small boards that have connectors for adding more fans.

At the front you’ll find a neat PSU shroud and a vertical slab of metal that hides hard disk bays. That tower serves up five 3.5in bays, and the shroud has a single 2.5in bay for SATA SSDs.

As well as that ample storage room, the Noctis has space for water-cooling in the roof – handy if you want to overclock the chip in the future, because the default AMD Spire cooler won’t do the job.

We only have very minor quibbles. A few of the cables around the front are a little wayward, and the wires at the rear are untidy. It’s not bad enough to cause airflow issues, but it could irritate those who desire a tidy system. And, while the PSU shroud and vertical hard disk tower are helpful, they do make the interior a little cramped.

The Radiance RZ certainly looks better than other recent models. The cabling is darker and neater than the messy wires inside the PC Specialist Vanquish Goliath, and that machine didn’t have as much room for adding storage.

And, while the Mesh Ryzen 7 Gaming PC-A did have all-in-one water-cooling, it didn’t have a PSU shroud and it didn’t offer as much expansion space.

The Overclockers UK machine is kitted out with a second-generation AMD Ryzen processor – and, while the Ryzen 5 2600 is technically a mid-range chip, it’s still got a tempting specification. The 2600 has six cores that support twelve threads, and its 3.4GHz base clock can use Turbo to reach 3.9GHz.

It’s not an X-branded chip, though, which means it has marginally reduced clock speeds and Turbo abilities – but that’s our only quibble with this mid-range part.

The Ryzen processor is paired with 16GB of memory that rattles along at an excellent 3,200MHz, and storage comes from a 250GB Samsung 860 EVO SSD and a 1TB hard disk so you get speed and capacity.

The Ryzen chip is no slouch, but it struggles when compared to some rivals. At this sort of price, you could get a PC that doesn’t have as much lighting – but one that does include an eight-core Ryzen 7 processor or a six-core Intel Core i7-8700K.

The gulf between the Radiance’s mid-range processor and those higher-end chips can be seen in benchmarks. In PC Mark 10 the Radiance returned a score of 3,721 points, but the PC Specialist Vanquish and its Core i7-8700K scored 6,949 points.

The Radiance returned a multi-core Geekbench score of 18,992 points, which is around 5,000 points behind Core i7 silicon. In Cinebench, the Overclockers UK machine scored 1,155cb – but the Mesh machine with its Ryzen 7 1700X processor was almost 500cb quicker.

The Ryzen 5 2600 won’t cause any gaming bottlenecks, and it’ll handle photo-editing, Office tools and other mainstream productivity tasks. But, if you want to run more demanding work tools – like video software, streaming software or CAD applications – then you’ll be better off with the extra cores of a Ryzen 7 chip, or the extra pace of Intel Core i7.

The SSD also contributes to mid-range performance. While the Samsung’s read and write speeds of 560MB/s and 325MB/s are fine for a SATA drive, they’re noticeably slower than a PC that uses an NVMe SSD, you’ll certainly notice the different when the system is booting, or loading applications and games.

Graphical grunt comes from an Asus-made Nvidia GeForce GTX 1060. Overclockers UK has smartly chosen the 6GB version of this card rather than the underpowered 3GB model, and the Asus model arrives with an overclock.

The original core speed of 1,506MHz has been improved to 1,620MHz, which means a revised boost clock of 1,848MHz. It’s a good card, but rivals do offer something more, with other machines at this sort of price regularly including the GTX 1070.

If you want to play at 4K, though, you’re out of luck. The Radiance could only handle our test titles at framerates below a playable 30fps, with medium settings only just over that mark.

The GTX 1070 that you can regularly find in similarly-priced machines won’t handle 4K, either, but it will offer more graphical grunt. That doesn’t just mean you can play games at better settings right now – it means you have more longevity for the future too.

The 3D Mark Sky Diver test illustrates the difference between the two cards. The Radiance’s GTX 1060 card scored 30,809 points – but a GTX 1070 will usually prove around 5,000 points faster.

Unsurprisingly, the components all attach to an Asus motherboard. The ROG Strix X470-F has the top AMD Ryzen chipset, which means you get the best options for dual-graphics, storage upgrades and memory speeds – there isn’t much you won’t be able to add to this machine.

The board serves up a second steel-supported PCI-Express x16 slot for a second graphics card, and you get two spare memory slots. The inclusion of a SATA SSD means that the board’s two M.2 sockets remain vacant, which is handy for adding faster storage.

The board has metal heatsinks, RGB LEDs, and a pre-mounted rear IO shield. You get beefed-up SupremeFX audio, and diagnostic LEDs at the top of the board. At the rear, there’s plenty of connectivity, including seven USB 3.1 connectors, a Type-C port and a PS/2 jack for legacy peripherals.

The ROG Strix X470-F ticks most of the boxes when it comes to motherboard options, but it’s still a mid-range product – and so it’s still lacking some features. You don’t get on-power buttons or POST displays for tinkering, and you don’t get Wi-Fi.

Our final tests illustrated that the Radiance has no thermal issues. It was never loud, which means you won’t notice this rig if you’re wearing a headset or gaming with speakers. Its CPU and GPU peaked with reasonable temperatures of 72°C and 53°C.