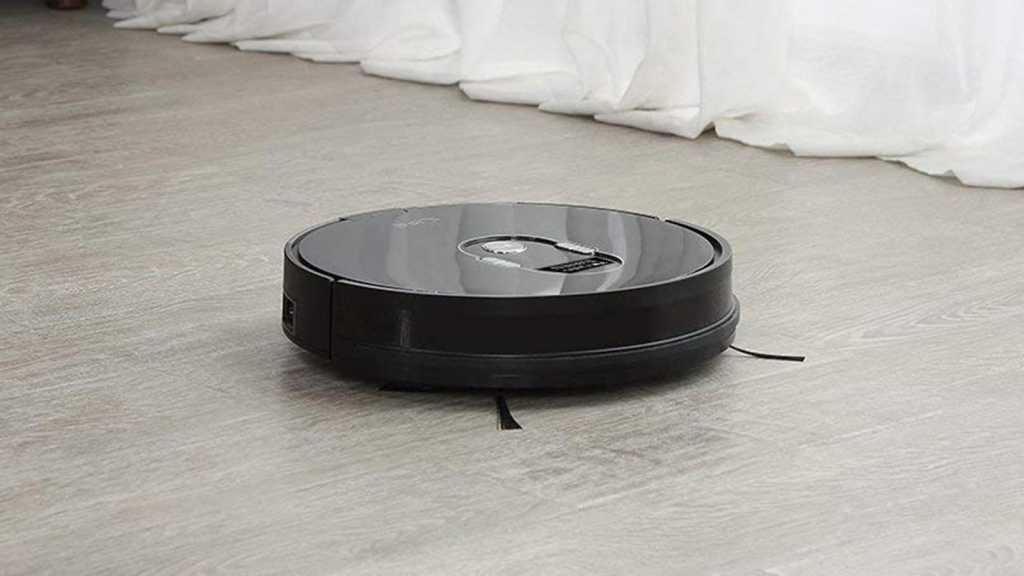 With its glittery black coat and slim profile the iLife A7 is a good-looking and functional robot vacuum cleaner. It’s affordable and intuitive in use, and it does a good job of vacuuming carpets and hard floors. We like the remote operation via the mobile app, but did find the need to swap between bristled and hard roller bars a pain.

The A7 (or Valerie as she is known in our home), is iLife’s latest robot vacuum cleaner. A rounded model with a relatively low profile for getting under furniture, she has a glittery black top coat that makes her look that bit more fancy than other robots we’ve tested, and her price is just as pretty.

Available now from Amazon for £249.99/$249.99, the A7 is a third of the price of some robot cleaners you can buy. She’s not true budget-end – you can find much cheaper models under £100 – but she offers a good compromise between affordability and functionality.

Something that will appeal if you have carpeted floors in your home is the bristled roller bar. Also in the box is a rubber version for hard floors, and you can swap these over as suits.

It would be easier, of course, to have the pair running at once – we have both carpeted- and hard floors in our home – so it’s a tad annoying to have to swap them over. In the end we left Valerie running upstairs where most of the flooring is carpeted with her bristle brush installed.

We found the A7 did a pretty decent job of clearing up hair, fluff and other bits of dirt from our short-pile carpet, and we encountered no instances of her throwing herself down the stairs, which is always handy. She is, however, partial to a USB-C cable, so you need to make sure you properly prep the area before vacuuming. (To be fair, this is true of most vacuum cleaners.)

As well as the roller bar the A7 is fitted with two spinning brushes at the front, which help to draw in dust from the corners. These get clogged up with hair just like any others, but we were impressed with how closely the robot stuck to the wall as it attempted to clear out all the nooks and crannies.

Even though its cleaning pattern seemed rather random the A7 did a good job, especially in max suction mode, in which we found the 2600mAh battery lasted an hour and 15 mins before the robot returned to its dock. (Recharging takes longer, at up to five hours, but you need vacuum your home only so many times a day.)

You can manually override the cleaning pattern, too, or put the iLife in spot-cleaning mode.

The dust box has a 0.6l capacity, which will likely need emptying after each couple of cleans (it won’t tell you when it’s full), or more often if you have particularly dirty floors. It pulls out very easily from the back of the unit, but emptying the box is more fiddly since you first need to move the dusty filter out the way.

You’ll notice the iLife A7 is missing a mop function. We’ve yet to see a robot vacuum cleaner we’d trust to properly mop our floors, and think they’d be better sticking to what they do best, but if this is a feature you’re looking for you’ll need to look elsewhere.

It’s worth pointing out that a mop function can be problematic if you have no way to cordon off carpeted areas in any case. Some cleaners come with a virtual wall device, or you can set no-go zones in the app. This isn’t possible with the iLife A7.

As with all robot vacuum cleaners, it’s unlikely that the A7 will replace your main cleaner. However, for interim cleaning it’s a useful device to have around the home, especially when you consider that you can schedule the cleaner to run when you’re not around to get in its way, and even remotely control it from afar thanks to app integration.

iLife supplies the same remote control that is used by all its robot vacuums (and if you have more than one at home it controls them all, which can be confusing fun). It’s simplistic, with a home button, buttons for auto-, spot- and edge cleaning, an option to change the suction strength, a go/pause button and navigational controls.

This paired with the LCD screen on the device itself makes operation easy. It can be even simpler still, with basic operational buttons on top of the vacuum itself.

Our preferred mode of operation was using the companion app, which we installed on our Galaxy S8. The most difficult part of setup is putting the robot into pairing mode and connecting it to your Wi-Fi network, but it’s all explained in the user manual. After this it remains connected and is intuitive in use.

It’s significantly easier to set up cleaning schedules using the app, and you can also remotely trigger cleaning from afar. The only problem we found with this is that a single press of the clean button merely wakes the A7, and you need a second press to send it on its way.

If you’re not at home and you don’t have some sort of CCTV installed we presume it would be quite easy to think it’s cleaning when it’s not. And it’s not like you can check its history to see if it actually has cleaned your floors before recharging itself when you return.

Something we also like about the app is that it monitors the life of the replaceable parts – the spinning side brushes, roller brush and HEPA filter. You’ll find a spare HEPA filter and pair of side brushes in the box, but after this you’ll need to buy replacements.

There’s a Find Robot command, too, which initially we giggled at – how are you going to lose a robot vacuum cleaner that’s 330x320x76mm and quite easily audible in use? Then Valerie trapped herself under a suitcase we’d left out to air and stopped cleaning so we couldn’t hear her. The command in the app causes the A7 to emit a beeping noise for nine seconds, which is enough to relocate the device.