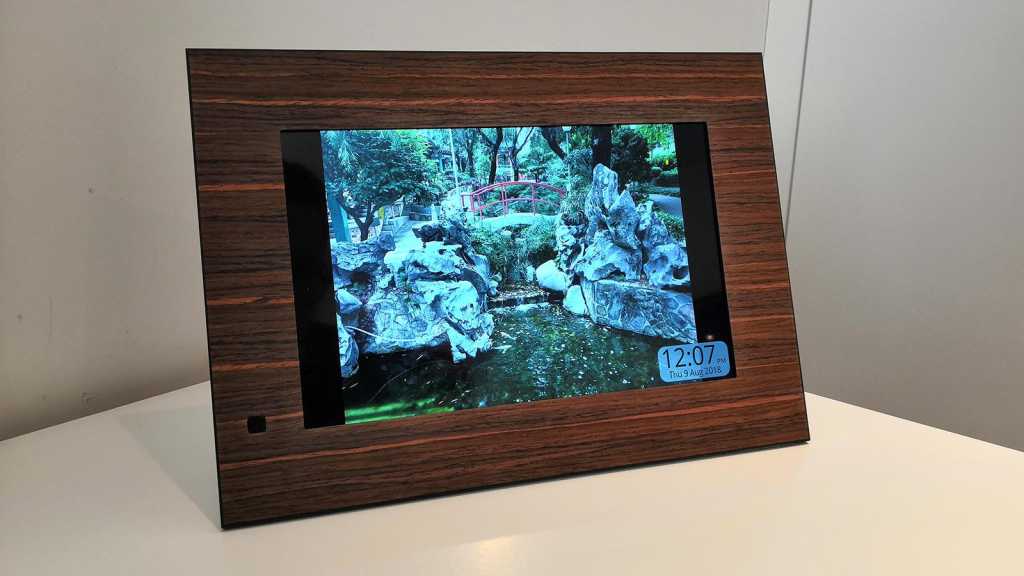 The Nix Lux is one of the most attractive digital photo frames on the market, and between the simple but homely design and the choice of screen sizes, it’s easy to see why it would be a popular choice for many. The lack of Wi-Fi features may disappoint some, but it also leaves the Lux dead easy to use, and helps keep the price down compared to Nixplay’s pricier Iris model.

Photo frames come in all sorts of shapes, sizes, and designs, but digital photo frames tend to all look like mini TVs, with plain black borders the norm. That’s all well and good for some tech, but for something that’s explicitly intended to be on display, you might want something with a little more pizzazz.

That’s what Nixplay hopes to offer with its latest digital frame range: Nix Lux, which comes in your choice of a metal or wood finish, and so avoids looking like just another featureless black rectangle.

There’s also a separate Nix Lux wall mount, available for all three frame sizes for £19.99/$19.99, though we haven’t tested this ourselves.

Check out our dedicated digital photo frame buying guide to find out how the Lux compares to the competition, and get more info on what you should look for in a digital frame.

As you might be able to guess from the name, design is a big part of the appeal of the Lux. This is a premium frame from Nixplay, designed to look right at home on a mantlepiece or bedside table, without looking too obviously like just another piece of tech – following in the footsteps of the successful Nixplay Iris.

From the front, it looks a lot like a normal photo frame, with your choice of a finish in a grey/silver metal, or a real wood veneer. The only clue that there’s more to the Lux is a small black square that interrupts the frame – the motion and infra-red sensor.

In person it looks attractive, and is worlds away from the clunky black plastic models that used to dominate the digital photo frame market. Even when the display is off, this looks like a well-designed household decoration, rather than just another screen, and the choice of finishes means that one model or the other should fit into just about any room.

The front of the display is totally flat, but the back of the device is curved with a textured, soft-touch design. This incorporates the physical control buttons – also found on a separate remote control – in addition to ports for USB-A and SD cards.

As with other Nixplay frames, one smart bit of design sees the braided power cable double as a stand. Flexible enough to be poseable, but rigid enough to support the frame’s weight, you can bend and flex the cable to prop the Lux up at your preferred angle, and in either landscape or portrait – with the picture automatically rotating to match.

Naturally, the most important spec here is the screen itself, but there’s actually a lot of variation depending on which model you have, with variations in resolution, aspect ratio, and brightness.

Even on our 8-inch review model, the lowest specced of the bunch, images look sharp and crisp – surprisingly so given the relatively low resolution. It helps that generally you’ll be looking at this from across the room rather than up close, which is forgiving of the lower image quality.

It’s also worth noting that these resolutions are very typical for the digital photo frame market, so you’re unlikely to find anything higher res from rival manufacturers.

The next important thing to note about the Lux is that unlike some rivals, this has no Wi-Fi or cloud features at all, so it will only play images from a local file source. There’s no internal storage, but there is support for both SD cards and USB drives (with one included in the box, conveniently), so it’s easy to transfer photos and videos across to the frame.

Functionally then this is pretty much identical to the cheaper (but more plain)  Nix Advance, with the same options to cycle through photos, with settings to control speed, transitions, and order, and choose whether to display the date and/or time on top of the images. As with the Advance, it can also play videos, with a simple in-built speaker for audio.

There’s no battery here, so you’ve got to leave it plugged into the power at all times. If you want to save on your electric bill, you can set a sleep cycle so that the screen turns on and off at certain times, or use the motion sensor so that it turns on when it detects movement and turns off again either five or ten minutes later.