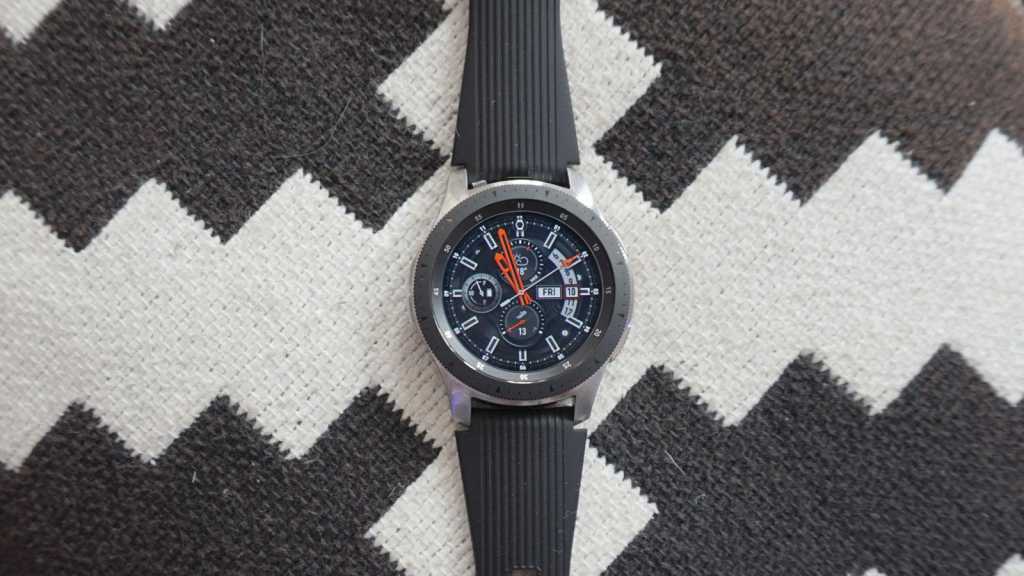 The Samsung Galaxy Watch is a refined vision of the company’s Gear S2 smartwatch from 2015 – and it’s the best wearable the company has yet made. We prefer the smaller 42mm model for its size and weight, though if you’re into the chunky look, the 46mm model will give you better battery life.  But it’s still only at its best when paired with a Samsung phone – using it with any other brand of phone loses the message and email apps. iOS connectivity is a little flaky, but it’s good to have the option to use with an iPhone.

The smartwatch industry in 2018 is stalling. While the Apple Watch continues to sell well and Fitbit is dominating the fitness market, other big companies can’t quite seem to work out how to shift smartwatches in large quantities.

Samsung is continuing to have a fair crack at it with the Galaxy Watch, a rebranded sequel to the Gear S3. By adding the Galaxy branding to a smartwatch launched alongside the Galaxy Note 9, the Korean company will be hoping its loyal fans will see the merits of a wrist-based computer.

It’s still betting on its own Tizen software rather than Google Wear OS, which means a much smaller app ecosystem. Is the Galaxy Watch worth it? Here’s our full review after time with both sizes of the Watch.

The Galaxy Watch comes in two sizes and is available to buy in the UK from Samsung directly. The 42mm model comes in rose gold or black and  costs £279 while the 46mm model is silver and  costs £299.

We concentrated on the larger 46mm version for our hands-on review but received the 42mm model for the full review.

Both are well-made, premium and very well-made smartwatches. The 46mm silver and black colour scheme is undoubtedly masculine and is close to dwarfing many wrist sizes. We prefer the 42mm, which is solely black on our model, and is a more manageable, unisex size.

This smaller case model is also available in a rose gold colour scheme.

Both look a lot like the  Samsung Gear S3 Frontier, a watch that Samsung still sells for £259.99. We’re not sure if this makes the new Watch a good deal or simply shows that not much has really changed here.

In fact, it even looks pretty similar to the  Gear Sport, a similarly designed and priced watch that’s not that old and is also still sold by Samsung. It means the Galaxy Watch is a confusing new addition to the range, and is a messier spread of products than Apple has.

We still love the circular display and the excellent rotating bezel that Samsung has practically perfected. It’s tactile and intuitive to use to scroll through menus and adjust settings.

The 42mm watch in particular sits comfortably on our wrist despite its relative bulk. But considering the tech squeezed inside its no mean feat.

The silicone strap is a standard 22mm fit on the larger model, with the 42mm Watch taking 20mm straps, meaning you can swap in your own standard straps if you want.

The rubberised feel of the included strap slightly detracts from the high-quality metal body of the Galaxy Watch and in black picks up a lot of dust, but such material combinations are standard for smartwatches. It’s a shame there’s no leather option like with the Gear S3 Classic.

The inner bezel has five-minute integers printed but this section does not turn when you use the outer bezel. A 33mm or 30mm diameter display protected by Gorilla Glass DX+ is what you get depending on your size pick. The former is noticeably more generous.

This means the 46mm Galaxy Watch is practically the same dimensions as the Gear S3 and aside from the silver casing we’d be hard pressed to tell them apart.

On the rear of the Galaxy Watch sits a redesigned heart rate sensor at the centre of a comfortable plastic casing that feels good against the skin despite being part of a relatively bulky device. It’s still not as huge as the  LG Watch Sport, though.

There are more differences inside that should improve the Galaxy Watch more than the iterative design suggests. But they are quite minor and show that the smartwatch market is pretty stagnant, with a processor bump to the Exynos 9110 from the 7270 of the S3 but the same 768MB RAM.

Even on the Bluetooth version GPS is thankfully standard, meaning you can track a run and other exercises accurately and see where you’ve been on a map. You can even do this in the pool thanks to the 5ATM water resistance.

The best thing about going for the larger model is the extra battery – 472mAh instead of 270mAh. Samsung claims each size Watch will get at least four days of use between charges but you should see more out of the more expensive model, which is also a tad heavier at 63g compared to 49g (weights without strap). Using the always-on display option will shorten battery life.

In our extended use of the smaller Galaxy Watch we saw roughly three full days before we needed to charge. If we used the GPS feature once or twice then this cut down to more like two days as we expected.

But longer battery life means you can wear the Watch for sleep tracking, which is a plus and something the Apple Watch doesn’t do.

It’s also notable that this is the first Samsung smartwatch with fully automatic exercise detection, meaning you don’t have to manually let it know you’re about to start a workout – a feature we feel is integral to a wearable, particularly of this price. And it works!

Like older models, it charges via the included wireless charger. From dead it takes roughly an hour and a half.

Despite these upgrades, we didn’t notice a big difference between it and older generations of Samsung’s wearables. Aside from some software tweaks the UI is very similar to 2015’s Gear S2 – though the performance and hardware are improved markedly.

The health features are numerous too. Auto exercise tracking is most notable and useful when you’re off on a brisk walk. We also tested it as a standalone running watch, with great results.

The rotating bezels is great to cycle through stats while on the move, particularly when you’re wearing gloves. Syncing with the Samsung Health app gives you a granular run down of your workout.

You can choose the Galaxy Watch as the sole fitness metric input, or double up with your phone or another Samsung wearable. A neat screen can show you all your vital stats for the day, and a few of the watch faces show you health info also.

Using 4G on the Galaxy Watch

EE sells a 4G version of the Watch in the UK with 1.5GB RAM and a higher price tag (the US version starts at $379.99). This will let you use it with full phone capabilities without your phone tethered like we saw on the  Apple Watch Series 3 and newer redesigned Series 4.

This version allows you to make and receive phone calls, texts and notifications from your watch without it being tethered to your phone.

Available on EE in the UK, this version has a non-removable eSIM that EE links to your EE SIM in your phone (for now, that phone must be a recent Galaxy device). We had a little trouble with set up, but it’s a process that employees can do in store for you.

You’re then free to leave your phone at home. We did. It’s an odd feeling, and obviously you’re stunted, but calls, texts and everything else came through when we had a 4G connection on the watch. There’s even a loudspeaker so you can shout at your wrist, full Star Trek style, for phone calls.

The speaker isn’t very loud but it’s great indoors and even outdoors we could hear a call on a rooftop. In a busy street is much harder, but you can connect the watch via Bluetooth to wireless headphones for calls too.

It’s a bit of a luxury thing and it runs down the small battery very quickly when you’re totally untethered from your phone but having the option, for runners especially, is cool – or if your phone runs out of battery on a night out, you still have calls, texts and payments. And the Uber for Gear app is pretty clunky, but it does work!

You might be put off by Samsung using its own Tizen software here, but it’s actually in many ways better than Wear OS. It has fewer third party apps available though, and even Wear OS is anaemic compared to the Apple Watch.

But Tizen is attractive and well designed – the circular menus and rotating bezel input is still the best way of interacting with a smartwatch. The app icons in the menus are circular, and screens move left or right depending on the direction you turn the bezel. It becomes very intuitive very quickly.

Samsung apps are fully featured, with call, text, email and, yes, Bixby all working in tandem with your phone. As you might expect, Bixby on a watch is primitive. It works, but other than calling up the weather or your calendar (things you can do quickly without talking) it doesn’t add much.

But you only get the Messages and Email app on the Watch if you sync it with a Samsung phone.

Even on other Android devices this is the case. You’ll receive message and email push notifications if that’s how you have your phone set up, but without the apps on the watch itself you lose some functionality.

When paired with an iPhone, which we also tested, it’s the same as on a non-Samsung Android phone. It was a surprisingly harmonious experience.

The Galaxy Watch is compatible with Android phones with Android 5.0 or later and iPhone 5 and later with iOS 9.0 and above.

Despite all of the claims of longer battery life, our 42mm model didn’t make it to four days. We left work on Friday at 5pm with it fully charged, and it was at 11% when we went for a run on Sunday morning – enough to see us through, but less than two full days.

This is disappointing, and we also found this wildly varied. If you want a Galaxy Watch with good battery life, pick the 46mm version. And bear in mind that if you end up with a 4G version, the battery life will be even less.

If you can put up with not tracking your sleep though then you can charge at night and easily get a full day on a charge. But it’s less than what Samsung promises.

The Galaxy Watch is Samsung’s best smartwatch to date. For less than some of the competition, it brings GPS, NFC, compact design and that smart rotating bezel.

Some might be put off by the lack of third party apps, but it shouldn’t worry the majority. The health apps in particular are great, with auto activity tracking a plus.

The battery life could be better on the smaller model and you only get the message and email apps on a Samsung phone, but it’s still preferable to Wear OS – which is mad, when you think about it.