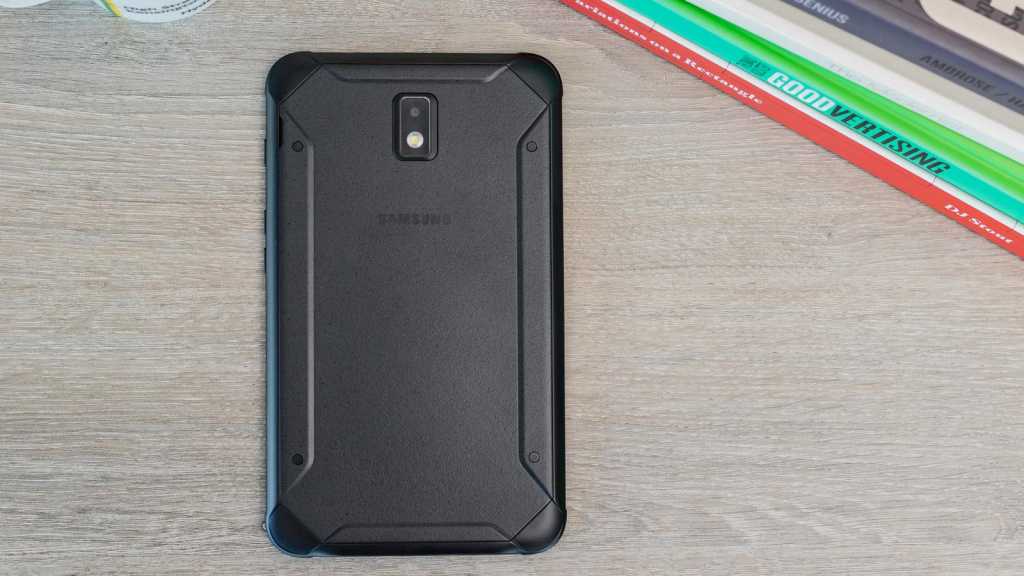 The Galaxy Tab Active2 is clearly not a tablet for everyone. It’s aimed at those needing a rugged device that can withstand the elements and a bit of abuse. If this is something you’re after then Samsung’s tablet will make a good companion. It’s one of the most rugged we’ve tested and benefits from IP68 waterproofing, drops of up to 1m and the ability to operate in extreme temperatures. However, specs like screen resolution and storage are out-dated and we’d expect more at this price. If you’re looking for a durable tablet for your kids then you can spend a lot less.

All the hype might be around the Galaxy Tab S4, but Samsung also has a tablet with a completely different set of features. It won’t appeal to everyone, but those with a more rustic outdoors lifestyle may find it a real boon. Here’s our Samsung Galaxy Tab Active2 review.

While the Tab S4 aims to replace your laptop, the Tab Active2 simply aims to survive the trials of a busy life. You’ll see why and how in our review, as well as whether it achieves this goal.

It might be cheaper than Samsung’s new £599 Tab S4, but the Active2 is still fairly expensive at £439. You can buy it directly from Samsung or retails like Amazon and Currys.

There’s little to compare it to in the market, but for some context the latest iPad starts at £319.

Check out our round-up of the best tablets you can buy.

Unusually, it’s this area where the Tab Active2 stands out from the crowd. Samsung’s tag line for the slate is ‘The tablet that can go where others can’t’.

And that’s really the main reason you’re going to want to buy this device over any other Samsung tablet or rivals that look nicer and have better features. It’s one of the most rugged we’ve ever tested so it’s not aimed at the masses, but those with a more, well, active life.

Samsung claims the Active2 can withstand drops of up to 1m and it’s also IP68 rated so had full dust protection and is waterproof to 1.5m. Furthermore, the military standard build can operate in temperatures between -20 and 60 degrees centigrade.

We haven’t been able to test all of that, even with the heatwave, but it’s certainly worthy of the word durable. Samsung also includes a rubber case (above) in the box for some extra security as well as somewhere to store the stylus.

It’s not the prettiest tablet around, looking quite old school in various ways. It’s got physical buttons so that water and dirt don’t stop you using them freely and even a removable rear cover like smartphones and tablets used to have many years ago. It’s chunky at 9.9mm and 419g.

At the back it looks quite cool with the rugged style, those Torx screws aren’t real though.

The question really is whether you need a tablet like this. In Samsung’s marketing material the Tab Active2 is shown sitting in mud and the below shot shows a young girl exploring the woods with the device. It’s cute but also looks a little dangerous.

Now, you might feel that going out for a family walk is exactly when modern devices should be out of sight. The last thing you want is your kids watching YouTube videos when you’re trying to spend quality time with them. However, there are decent educational apps so a trip out can be edifying.

If you are thinking about it for children, then you needn’t spend this much money as there are a number that are durable in our kids tablet round-up – albeit not to this level.

The Tab Active2 is perhaps more suited to adults who want a device to go on hikes and other activities where the app you want to use – whether it’s just maps or something more niche – is best off used on a larger screen than your phone.

We can’t decide for you, of course, but if you need a tablet that’s at the extreme end of the spectrum then this fits the bill.

If the design is what you’re after then great, but you’ll have to live with a fairly plain set of specs and features. The Galaxy Tab Active2 might be fairly expensive but you don’t get all the latest gear.

The screen is 8in which used to be a popular size for tablets but with phones often over 6in, most are at least 9.7in to make sure it’s a decent amount larger. Sizeable bezels here don’t look great but do at least mean you can hold the device without hindering the display.

We’re used to Samsung devices having bright and colourful SuperAMOLED displays with high resolutions. However, the Tab Active2 has a TFT screen with an uninspiring 1280×800 resolution.

In 2018, that’s not great so it’s likely your phone already offers something better. It is very bright though at up to 472cd/m2, which is key for outdoor usage.

You do, however, get the S Pen included which works nicely with the screen. It’s got a fine 0.7mm tip and 4,096 levels of pressure sensitivity. It’s similar to the Galaxy Note and the software includes Air Commands so you can do various handy things.

Things aren’t exactly exciting when it comes to core specs with a two year-old Exynos 7870 processor. It’s 1.6GHz octa-core and is backed up by a middling 3GB RAM. As you can see from the benchmarks, the performance isn’t exactly blazing.

If you need to run any demanding apps, perhaps for your outdoor pursuit, then it may struggle.

There’s more disappointment in the storage department where there’s only 16GB. A microSD card slot can take 256GB but you won’t want to run apps from here due to slower performance.

The amount of connectivity on offer here is a highlight starting with dual-band 11ac Wi-Fi, NFC and Bluetooth 4.2. There’s also a reversible USB-C port for charging and a range of sensors but no barometer for all you altitude tracking climbers and hikers out there.

As an outdoor tablet, it’s great to see both GPS and 4G connectivity so you don’t need to connect to your phone or Wi-Fi hotspot for data. The Tab Active2 using a Nano-SIM slot.

There’s not much to speak about for audio with average sounding stereo speakers and headphone jack.

Samsung has put a fingerprint scanner on the device, which is mounted in the physical home button on the front.

Photography and video isn’t a strong point her with basic cameras. At the back is an 8Mp camera with auto focus and flash. It’s ok but nothing more and you’ll likely get better results from the phone that’s no doubt in your pocket or bag.

Video is limited to Full HD at 30fps and the 5Mp front camera is also very basic.

If you’re looking for a tablet with good photography and video you’ll need to look elsewhere but we’d suggest just using your phone.

There’s a 4450mAh battery in the Tab Active2 and in old school fashion, it’s removable so you can carry a spare around – although only one is provided.

It’s not the largest battery around but the mid-range specs – namely a low clocked processor and screen resolution – means that the device isn’t very power hungry, at least compared to others.

If you’re out and about using 4G and GPS with the screen on constantly then it’s going to run down a lot quicker than casually browsing the web at home. It does last well, though, with the possibility of more than 10 hours video playback depending on your screen brightness.

The Galaxy Tab Active2 comes pre-loaded with Android 7.1 Nougat. That’s not the latest edition which is 8.0 Oreo but it doesn’t matter too much – not like the difference many years ago between versions.

As usual, Samsung adds its own user interface but it’s easy to use and just like the firm’s smartphones.

The highlight here is the S Pen which can be used with the Air Command feature just like on Samsung’s Galaxy Note phones. It’s a useful tool able to do various things like crop your photos or scribble over a screenshot.

We’re not so keen on Bixby Home, Samsung’s digital assistant which is a swipe away from the main homescreen.