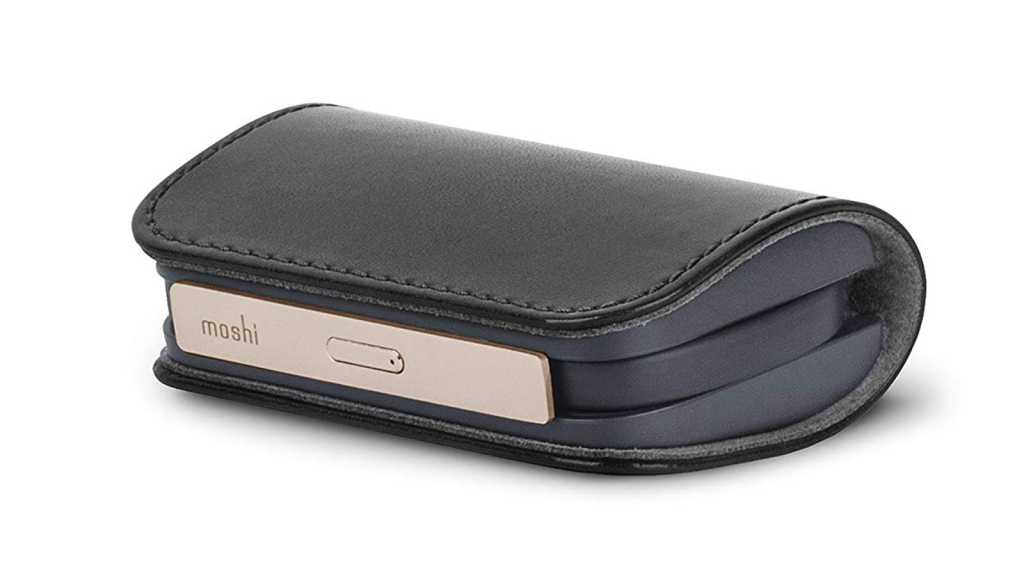 Expensive but oozing with class, the Moshi IonBank 3K will offer a fast charge to any recent iPhone. You’ll get a full charge for all standard models (just under for the Plus and X), and then benefit from passthrough charging when it’s time to power back up. If you can afford it then it’s the sort of gadget that will cause envy.

The IonBank 3K is a reddot design award-winning power bank from Moshi, with a deluxe vegan leather magnetic cover, aluminium panel and built-in flat, tangle-free cables. Classy and ultra-compact, it offers a fast charge to any recent iPhone running low on juice.

It’s not often that we’d recommend a 3,200mAh power bank that costs more than £50 – especially one that rules out 86 percent of the smartphone market – but the Moshi is no ordinary power bank. You can buy the IonBank 3K in burgundy from Amazon UK for £54.95 (also available in black as per our review sample, but currently out of stock). It’s significantly cheaper in the US, listed on Amazon at just $34.99 which makes it a much better deal.

Arguably this tiny device doesn’t need its leather case, but we’re pleased Moshi included one. You actually wouldn’t know this was a power bank without opening the cover, which means Moshi has been able to tuck away on the inside the device specifications that are necessary if you want to take it on a plane, but can look rather nasty.

Highlights within that spec include a fast-charging 2.1A (10.5W output) and 2.4A (12W) input, which means the IonBank 3K is just about as quick to recharge your iPhone as it is to recover its own power supply. Handily, in our tests an iPhone would charge from the Moshi while the power bank itself was being charged from the mains – a process known as passthrough charging and here tagged SmartSense.

SmartSense not only frees up mains power sockets and Lightning cables, which can often be found few and far between, but it allows synching between your device and a computer.

Also listed here is the capacity – 3,200mAh – but you’ll note unlike most power banks only one LED is to be found anywhere on the device, and it’s not instantly obvious from this how much power remains unless you know what to look for (a green LED represents 50-100 percent, orange 20-50 percent, and red 0-20 percent). Ordinarily this might be an issue, but due to its low capacity it’s fairly easy to understand that if you’ve used the IonBank 3K to charge your iPhone then you’ll need to recharge the bank.

Exactly how many times it will power up your iPhone depends very much on your iPhone model and its age (batteries can deteriorate over time). Moshi says it will charge an iPhone 6S 1.2 times, a model that has a 1,715mAh battery inside. That means it is operating on an efficiency rate of around 65 percent, which is pretty standard for power banks which can lose energy through heat generated and voltage conversion.

However, at this capacity, it is not able to fully charge any of the iPhone ‘Plus’ models, nor the iPhone X. A 70- to 80 percent charge is still useful when you’re about to run out of power, of course.

Consult the table below to work out roughly how many times you’ll be able to charge your iPhone:

As we’ve mentioned this power bank is exclusive to iPhones, and moreover those that connect to a Lightning cable (everything in the past six years). It has built-in Lightning and USB cables, which are relatively short and non-replaceable. They feel sturdy, but should one break the power bank will be of no use to you.