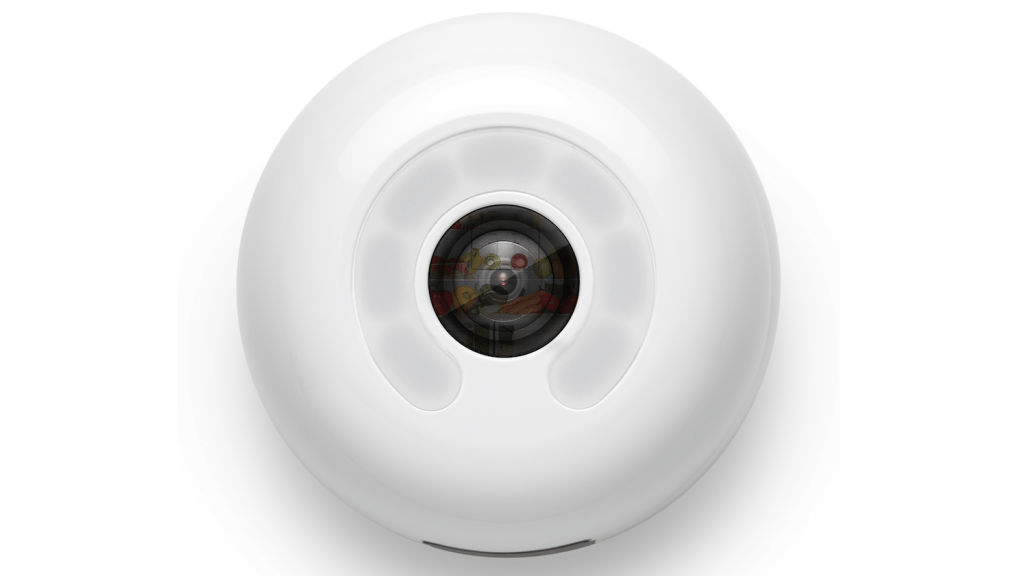 The best connected devices make our lives easier and smoother, solving problems and simplifying our daily routines. Right now, the FridgeCam does the opposite: it gives you more things to track, and manage, and worry about. If it worked better as a camera we’d just say you should skip the object tracking and use it as an easy way to peek into your fridge while you’re in the shops, but since it only takes sporadic photos of some of your shelves, it’s hard to even recommend on that basis.

The smart kitchen is the next frontier of the smart home movement, and smart fridges play a major part of it, tracking the contents of your fridge and letting you know when your chicken’s going off or if you need to pick up some milk. Still, fridges are expensive, and smart fridges even more so – which is where the Smarter FridgeCam comes in, as a much cheaper way to link your fridge to your phone.

This small standalone device sits inside your fridge door and uses its camera to let you know what groceries you have and what you need. It’s intended to be flexible and cheap enough to serve as a smart upgrade for any existing fridge, but none of that really matters if it doesn’t actually work well.

We’ve spent a couple of weeks with the Smarter FridgeCam at home, and what we’ve found is a device that’s full of promise, but doesn’t deliver on it yet, with connection problems, fiddly setup, and a sense that the whole thing is just more work than it’s worth.

The Smarter FridgeCam is out now in the UK, where you can buy it for £149.99 either from Currys PC World or direct from Smarter. For the moment, it’s UK-only though.

You can actually get it for just £99.99 from Currys if you buy it together with any fridge – simply add both to your shopping basket and the discount will be automatically applied. The same offer should be available in-store too.

Let’s start with the good: the FridgeCam looks great. The small, circular device holds a camera in its centre, used to take a photo every time you close your fridge door. Around the lens is a ring of LEDs, used both as a flash for the photos, and to give assorted status lights.

The main body of the camera connects to a small mount with a sticky back, which you use to attach the camera to your fridge – most likely to the door, so that it faces in and can see the bulk of your fridge shelves. Smarter includes one spare sticky pad, in case you find you need to re-position the camera for any reason. 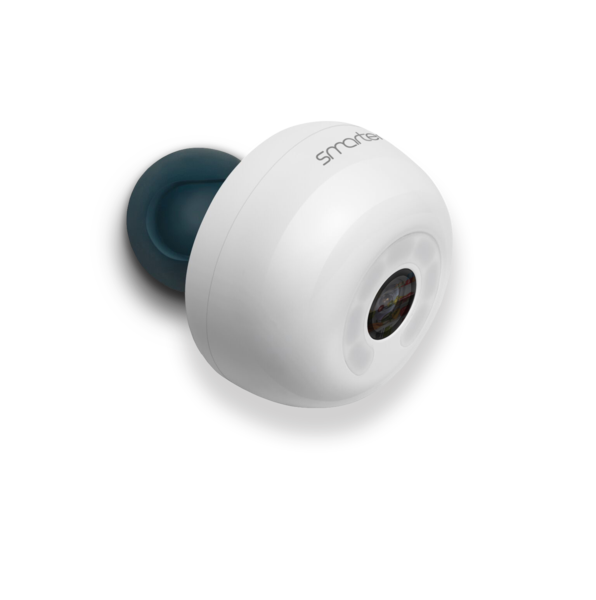 This mount is fairly poseable – important for trying to get your FridgeCam into the best possible position to photograph the whole fridge – and once set up the camera doesn’t take up too much space – important in an already-crammed fridge.

On the underside of the device, a small cover hides the reset slot and Micro-USB port, used for charging the battery. This is really the only complaint we have about build quality – on our review unit the internals somehow moved about so that the USB port and reset slot weren’t quite lined up right with the holes, forcing a bit of shoving and yanking to either charge or reset the device each time.

So the FridgeCam mostly looks great – but the problems creep in once you actually start trying to use the thing.

It started going wrong from the setup onwards, which is never a good sign. Just connecting to the Wi-Fi took a few attempts and a couple of resets, and then the accompanying app started acting up too, refusing to load the explanatory videos included in the setup process.

That was a problem in turn because the text in the app gives maddeningly little advice on how to position the camera in the fridge – advising you only to find the right camera angle, but without any advice on where in the fridge might be best for that.

The camera is designed to take a photo each time you close the fridge door, snapping the shot as the door swings shut and quickly syncing it to your phone. We never managed to get the position quite right, resulting in a string of photos at various awkward angles.

It doesn’t help that even in a pretty average-size fridge the camera couldn’t actually get everything in shot – it misses the contents of the door obviously, but also cut off the top shelf and the vegetable drawer.

The connection problems from setup continued to plague our model, which would flash angry red and orange lights every now and then as it failed to connect, in turn refusing to take or sync photos. Throw condensation into the mix – every now and then a photo will come out misty and blurred – and the result is a camera that would occasionally take photos of part of the fridge, usually at an odd angle, and sometimes blurred. Great. 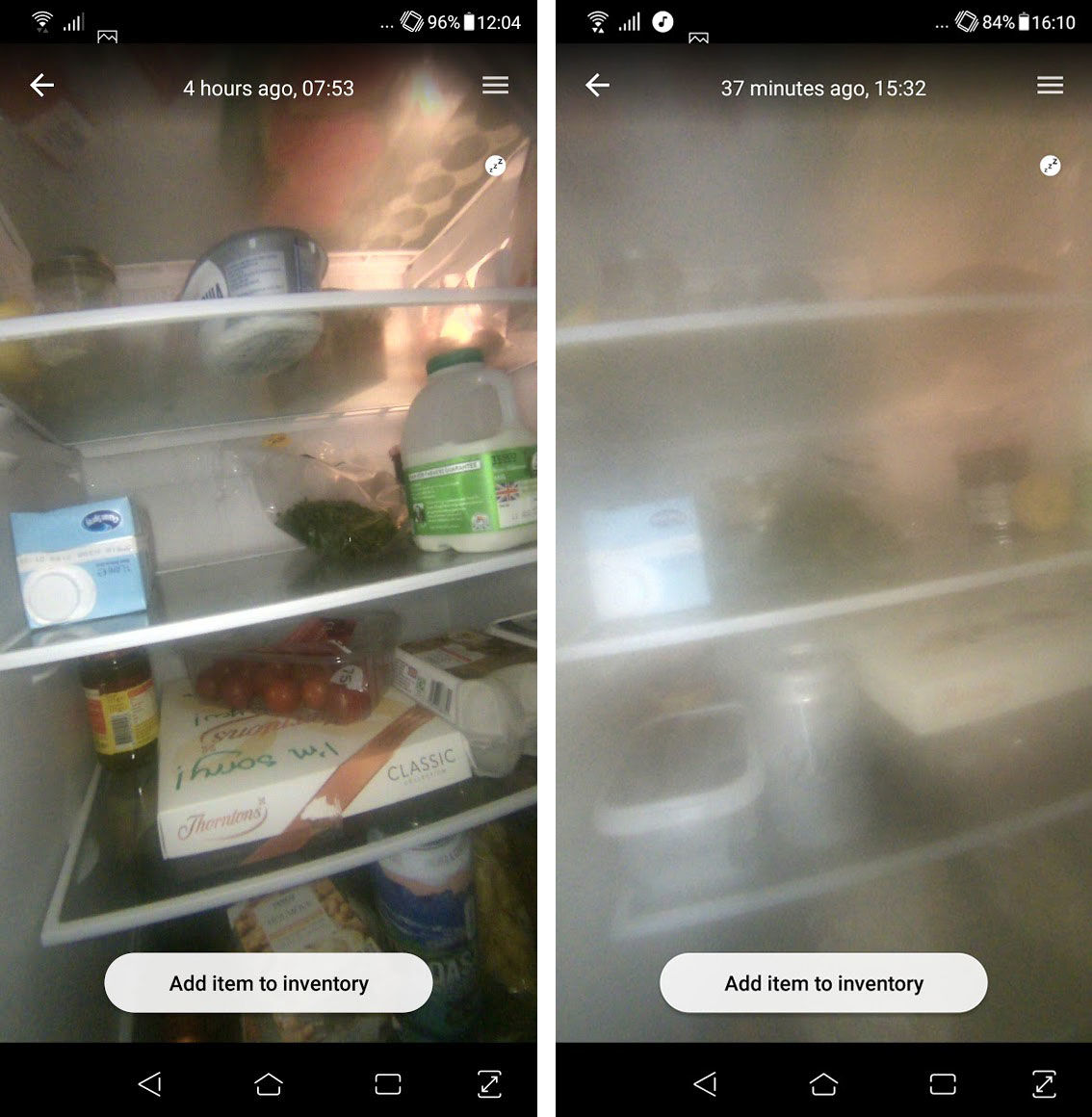 If you can get the camera working, you can use it to quickly check the contents of your fridge, seeing at a glance whether you’ve got milk left or if you remembered to buy tomatoes the other day. You can also get a bit fancier with it, tracking specific items’ expiry dates, but that takes a bit more work.

Right now tracking an item is a very manual process – you draw a box around it on the most recent photo, then give it a name and expiry date. There’s a barcode scanner to add items automatically, but it’s sluggish, and limited to Tesco products as part of a partnership with the supermarket chain.

There’s object recognition at work, but it’s driven by machine learning, in theory improving based on the behaviour of FridgeCam users. That means that eventually this might be capable of spotting a tomato at a glance, but right now it’ll forget what your milk looks like if you put it back in the fridge at a different angle.

Maybe in the future the FridgeCam will be a genuine convenience, but it simply isn’t there yet. To get the most out of it you’ll have to take the time to manually tag your shopping, re-tag things when the object tracking fails, and remember to store things in the specific parts of the fridge that the camera can actually see.