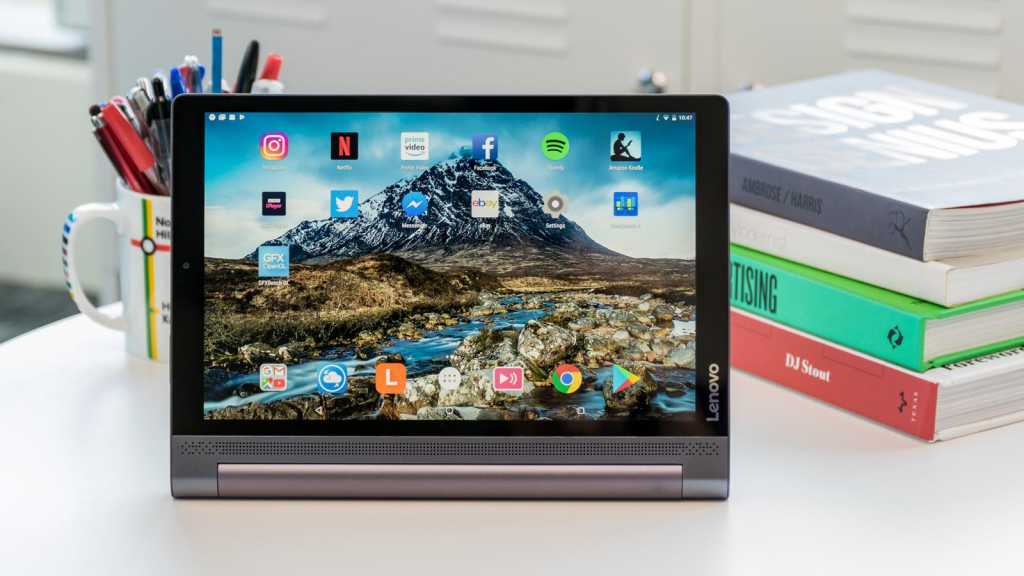 In many ways the Lenovo Tab 3 Plus is superior to the regular iPad. It has a larger screen, better speakers and comparable battery life, and if you like and will use the stand it solves an ongoing tablet problem by letting you use it handsfree.  But the iPad is only £20 more, has better performance and a brand familiarity that is hard to beat. For others, the Tab 3 Plus’ design will be off putting and ugly and it is a little annoying to use in one hand or on a lap in portrait mode given its strange dimensions.  But a hi-res display, great speakers with Dolby Atmos and outstanding battery life make this a leftfield good choice of tablet best if you watch a lot of Netflix.

If you are looking for a tablet that costs less than an iPad, has a great screen and good performance then the Lenovo Yoga Tab 3 Plus is well worth a look despite the terrible name and odd design.

It has built in stand that gives it a lop-sided look when portrait but provides a spine to hold onto one handed. Turned landscaped it becomes symmetrical and the pop-out stand solves an issue many with regular shaped tablets have to buy cases for.

You can even hang it on a hook to watch it in landscape, if you want.

With a decent screen and above-average speakers, the Lenovo Yoga Tab 3 Plus is a nothing if not versatile. We review it here to see if its quirks are enough to recommend it on its own merits and above other tablets on the market.

Although there aren’t many high-end Android tablets in 2018 the Tab 3 Plus is firmly mid-range, and is well priced for its specs.

Our review sample came from GearBest where you can get the device for £298.

The Tab 3 Plus is defined by its outlandish design. It is based around the built-in stand, a feature you might not know you needed until you use it.

For us, it’s still something we could live without. But if you use your tablet a lot in landscape mode on a table or in bed to stream TV or films then this is the tablet you’ve been waiting for.

The stand is built into the near-cylindrical base (or spine, depending how you hold it) of the tablet and is released with the push of a button. The hole on the stand can double up as a hook hole if you want to hang the tablet for use in the kitchen, say.

It’s a very sturdy stand and is adjustable to 180 degrees, meaning you don’t have to balance it or fork out for a stand case like you might with the classic slate tablet design.

It’s quite noticeable and means it isn’t the best tablet for one-handed use, where you have to rotate it and grip the curved edge like the spine of a folded magazine. On one end of the stand section is a circular power button that we accidentally pressed several times when moving the tablet during a video, annoyingly locking the whole device.

The spine contains the 13Mp camera and the tablet’s four speakers, evidenced by the dotted grille. The heavy spine means the rest of the device is pleasingly slim and it’s covered with a nice-to-the-touch faux leather embossed with the Yoga logo.

Around the front is a bright and sharp 2K display with decently slight bezels that are only interrupted at one end by the front facing camera and the other by a Lenovo logo.

If the tablet is a tad bulky to use portrait, it comes into its own landscape, where it never once toppled over thanks to the weight distribution. It’s also splashproof for use in the kitchen and maybe even bathroom, though it doesn’t have an IP waterproof rating.

With a design geared towards media consumption, the Lenovo Yoga Tab 3 Plus has specs that deliver on this promise.

For a tablet marketed as ‘the ultimate TV and movie tablet’, the Tab 3 Plus pretty much delivers. The screen is a 10.1in Quad-HD panel with a resolution of 1560 x 1600 and 299 pixels per inch. Basically, it looks great

Provided your internet connection is allowing streaming at the highest resolution from services like Netflix, this display looks great. Brightness is good, and the pixel density is actually better than the 2018 iPad – great to see when the Lenovo’s display is larger.

Viewing angles are good and scrolling through webpages or social media is smooth.

While the Tab 3 Plus isn’t as fast or as capable as tablets like the iPad Pro, it is has decent specs considering the waning Android tablet market in 2018.

It has a Qualcomm Snapdragon 652 processor in the Wi-Fi model, and the 625 if you go for the 3G/LTE model. We reviewed the Wi-Fi only model and unless you really need mobile data away from a Wi-Fi router it’ll be the one you’ll go for too.

In this age of streaming you might be less concerned with how much media you can fit on the Tab 3 Plus, but there is 32GB on board, with 3GB RAM to keep things ticking over. For movies and TV on the go, 32GB is more than enough storage to download a few episodes of something for the train or plane.

If you’ve got a bigger media collection on a computer or hard drive you can of course move videos across to the tablet too. There’s also a microSD card slot allowing for expansion up to 256GB for the truly media-heavy users who might want to put all their music and video on it.

As you can see from the below benchmarks, the 2018 iPad is the more powerful performer. It may lack a stand, but its speakers are actually just as good as the Lenovo’s, even if they lack Dolby support.

The iPad is far better in graphics performance and so is better for gaming. The Tab 3 Plus can cope with basic games, but anything high-end and it can’t cope with the frame rate. Its form factor is also not designed with gaming in mind, and means if you do want to play games on a tablet then this is not the one.

Wi-Fi connectivity on the Tab 3 Plus is excellent with dual band 802.11 a/b/g/n/ac connections all supported. Bluetooth is version 4.0, not the latest 5.0, but we found connection to wireless headphones and speakers absolutely fine.

The speaker grille on the Tab 3 Plus is adequate and provided by audio specialist JBL. With Dolby Atmos they create a well-balanced sound, but don’t let the marketing fool you – this is not surround sound. We also found that they didn’t go quite as loud as we’d like for

Wired headphones sound excellent and you can tune to your tastes with the Dolby Atmos settings that are baked into Android on the Tab 3 Plus.

The cameras on the tablet are merely fine – you’ll be OK using the front facing one for video calls but you won’t want to use the rear camera for anything as it’s grainy and awful.

Battery life is quoted at 18 hours, and we found this pretty much bang on. The Tab 3 Plus manages to eke a lot of juice out of its huge 9,300mAh cell and this bodes well for long haul flights and journeys with a box set lined up.

It also fast charges with the included wall charger which is great to see on a tablet now that most high-end phones are capable of it. You can even use the tablet to charge your other gadgets like a huge power bank.

The tablet runs Android Marshmallow out of the box, but we were immediately automatically directed to update the software to Android Nougat 7.1.1. This is good for an Android tablet as unfortunately not many have the latest Oreo build, concentrating as manufacturers do on phone updates before tablets.

Lenovo has added the good Dolby Atmos features alongside so-called quick gestures that we turned off as they didn’t add anything to the experience and were merely to go forward or backward in the OS. A tablet is not used like a phone, and you probably won’t need or want to do much customisation.

It comes with a little bloatware installed. The Lenovo app is completely useless and only contains a trailer and spec sheet for the tablet, and you can’t uninstall it. Far better is Media Cast that lets you beam music from your phone out of the tablet’s speakers, or cast a phone screen onto the larger 10.1in display.