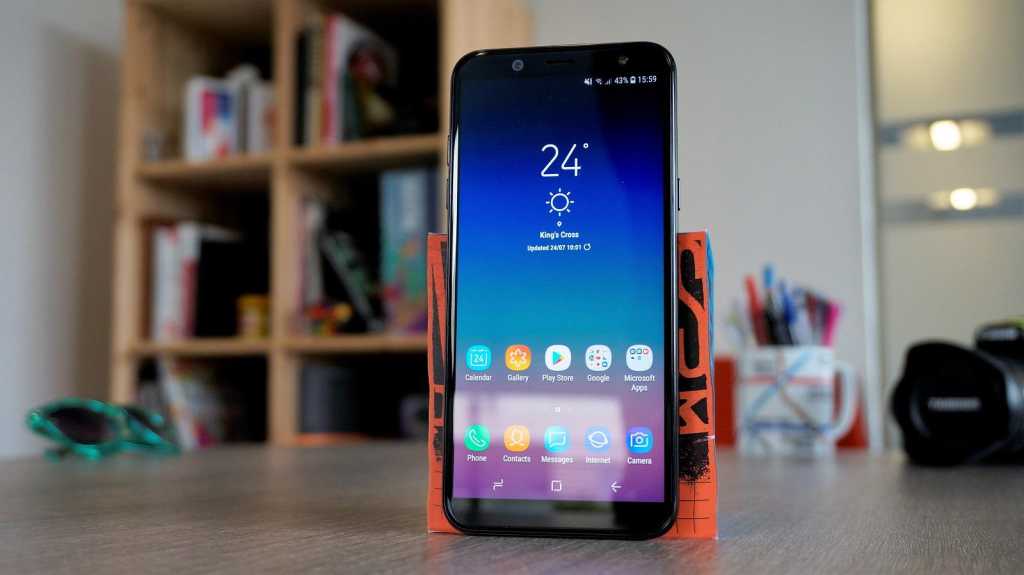 The Galaxy A6 is a very attractive mid-range phone offering a similar package to the A8 but at a much lower price point. We like the design and build quality with the main features being the tall screen with small bezels and decent cameras. It won’t knock your socks off but this is a lot of nice phone for not much money. Just bear in mind that the Moto G6 is cheaper and offers a higher resolution screen, more memory and storage.

Samsung’s A range of more affordable phones has been a continued success. The latest to join the family is the Galaxy A6, bringing flagship-esque features at an almost budget level price. Here’s our full Samsung Galaxy A6 review.

Samsung Galaxy A6: Price and Availability

We were impressed with the Galaxy A8, offering some flagship Galaxy S features at a lower price of £449.

It’s also available on contract from the likes of Carphone Warehouse. Our sample was provided by Vodafone where the A6 is available for free on a £29pm contract.

At this price, the Galaxy A6 is in competition with a number of excellent mid-range handsets like the Moto G6 and Nokia 6 (2018). An odd coincidence they all use the number six.

Samsung Galaxy A6: Design and build

At the front, the Galaxy A6 looks very similar to its bigger brother, the A8. That is to say it looks pretty plain with not a great deal going on, not even a Samsung logo so it’s not instantly recognisable as a Galaxy phone.

Switch the display on and this is more apparent, as are the small bezels that run around the display. They’re a similar size to the A8 and mean that the phone is comfortable to hold yet has a decent amount of real estate.

The bezels are not like the S9, of course, and there’s no curved edge either but this is expected due to the price. A screen-to-body ratio of 75 percent is good and the 2.5D glass does have very subtle curves at the edge.

At the back, the A6 is not like other Samsung phones because it doesn’t have a glass rear cover. Instead metal greets you with a matte finish and clear antenna lines. This design is nice but might seem a bit dated to some with glass on so many current phones – it reminds us of the HTC One A9 from 2015.

The camera module sticks out marginally and has the fingerprint scanner below where it’s easy to reach, similar to the Galaxy S9 after Samsung misguidedly put it to the side on the S8.

If you’re looking for a thin and lightweight phone then the A6 will suit, it’s just 7.7mm and 162g.

It’s worth noting that the phone doesn’t come with any waterproofing like the A8. That’s normal at this price but if you need some protection, the Moto G6 has a decent water repellent coating.

There’s a choice of colours for the A6 with the black model we saw or the option of gold or lavender if you’re feeling more adventurous.

Samsung Galaxy A6: Specs and features

At a significantly lower price than the A8, the Galaxy A6 has downgraded specs but for many the phone will more than adequate for day-to-day use.

The display on the Galaxy A6 is one of the key features here and it’s almost the same the A8.

It’s also 5.6in on the diagonal and uses Samsung’s preferred Super AMOLED technology. It also has a modern 18.6:9 aspect ratio but simply has a lower resolution of 720 x 1480 so the pixel density is 294ppi compared to 441ppi.

This is by no means horrid to look at and out of context looks perfectly fine. The AMOLED display, as you would expect, provides good contrast and colours that pop. It’s slightly brighter than the Moto G6 at 294cd/m2.

It’s understandable that the A6 has a lower grade processor to the A8. It’s powered by an Exynos 7870 which is still octa-core but has lower clock speeds at 1.6GHz. It has a Mali-T830 MP1 GPU.

You get a fairly standard 3GB of memory and 32GB of storage, although if you’re lucky you might find a model with 4/64GB. There’s a microSD card slot should you need to add more storage, which can handle up to 256GB.

Performance is similar to the Moto G6 which has a Qualcomm Snapdragon 450. The vast majority of the time, the phone is responsive and slick to navigate around. Only occasionally is there a bit of lag when opening an app or doing something demanding.

There are more downgrades when compared to the A8. So you get dual-band Wi-Fi but it doesn’t include 11ac. Bluetooth is version 4.2 and there’s the older MicroUSB port instead of the modern reversible USB-C.

Samsung does at least offer a headphone port and the A6 has NFC, too. Oddly, the single speaker is placed above the power key on the side like the A8. The sound quality is lacking, mainly in the bass department, but it does go quite loud.

The fingerprint scanner works well and can also be used to open and close the notification pane. Although you have to swipe up to open it and down to close which is backwards if you ask us.

There’s also the option to use facial unlock which isn’t as quick but doesn’t require finding the sensor. You can also choose for it to work quicker, at the cost of the security level. Even at the faster setting we sometimes found it a little slow.

The camera technology available in mid-range and even budget phones has improved dramatically in the last year or so. Now, many cheap devices have dual rear cameras, with some even having two at the front as well.

This isn’t the case with the Galaxy A6 which just has your traditional two cameras, but they’re very good – quality over quantity here.

At the back is a 16Mp camera with an impressive S8 matching f/1.7 aperture. It has auto focus but no optical image stabilisation. It has the same set of specs as the Galaxy A8, although that has dual front cameras.

We’re used to Samsung phones having good cameras and the A6 is no exception. When you consider the price of this phone, the results are better than you might expect. Photos in decent lighting conditions are colourful and detailed and the phone can even cope pretty well in low light.

The A6 has an 16Mp at the front, too, although with an aperture of f/1.9 this time. Interestingly there an LED flash with three levels of brightness you can control. We’d rather not have to use a flash, but overall the front camera is decent for this price.

Like so many other phones, the Galaxy A6 has a 3000mAh battery. With is fairly low res screen and modest processor combination, the phone lasted a decent eight hours and 22 minutes.

That’s almost double the A8 and not far off the Moto G6. The phone should last most users through the day.

Just bear in mind that the A6 has a older MicroUSB port and offers no kind of fast charging, which the Moto G6 does – it can impressively charge to around half in 30 minutes.

Samsung Galaxy A6: Software and apps

It’s good to see the Galaxy A6 doesn’t ship with the older Android 7.1 Nougat software. Instead it has the more up to date 8.0 Oreo.

Samsung’s interface is put over the top and these days it’s one of our favourites, being much more clean and simple than it has been in the past. It looks slick and is easy top operate, yet there are plenty of features to explore in the settings menu if you like.

You can make use of the Games Launcher, Multi Window and various other Samsung offerings. There are a number of pre-installed apps from Samsung, Google and Microsoft.

An interesting feature called Dual Messenger lets you use two accounts for apps like Facebook and switch between them. This could be handy if you use the same service with accounts for you personal life and work.

There’s no dedicated physical button for Bixby but you can summon it with a single swipe from the main homescreen. We still prefer the Google Assistant but it’s worth a try to see what you think.