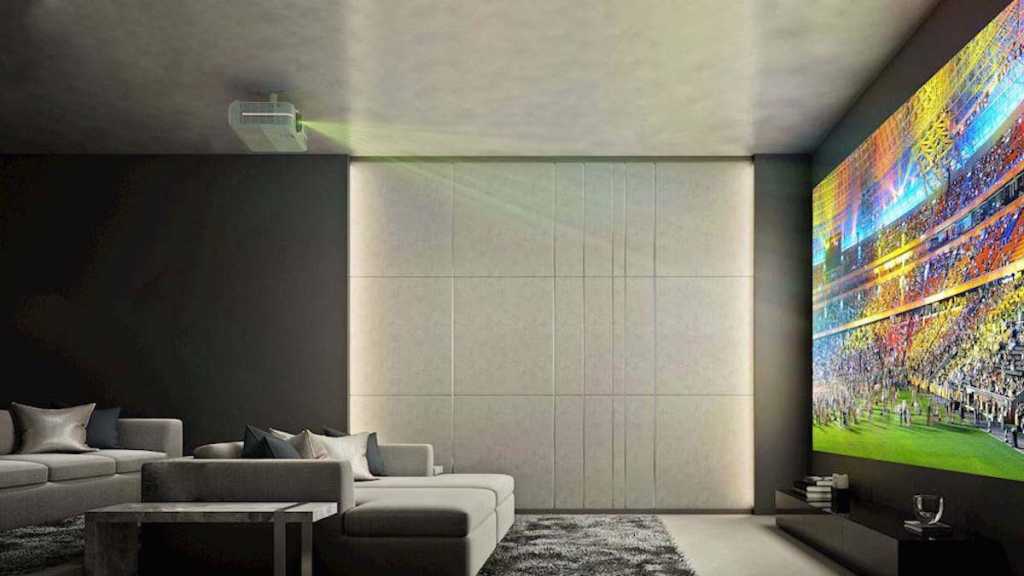 Of the current batch of affordable 4K projectors, this is our current favourite. It combines ease of use with a dynamically colourful image, all at a bargain basement price. Watching 100-inch HDR movies on it is delightful and highly immersive. The UHD300X only needs a decent sound system and a freshly painted wall to complete the cinema experience.

Optoma isn’t a brand name that most people will be familiar. But with many of the established names moving out of the home projector market, it has been quick to establish a reputation for delivering high-quality products at budget sensitive prices.

Its projector range is huge, with over 150 models ranging from ultra-portable devices to professional installation gear. And, purely for home use, Optoma list 27 current designs with new models added on a regular basis.

The UHD300X is one of nine in the home range that can project in 4K resolution and one of the most affordable on the market to have this capability.

Check out the best projectors for 2018.

The UK RRP pricing for the UHD300X is £1,199, but it can be easily found for under £1,000 from a wide selection of online retailers including Projectorshop24 and Just Projectors.

We should mention that the BenQ TK800 does quote more lumens of light for that cost, although in our review it performed better with the brightness dialled down to much the same level as the UHD300X outputs by default.

Compared with the Optoma flagship UHD60 design, this is almost half the price for a projector that offers almost the same specification except the UHD60 punching out 3000 ANSI lumens over the 2,200 in the UHD300X, and also having a greater contrast range.

So is the UHD300X bright enough for home cinema, and is it worth the extra over a purely 1080p solution?

With projectors, it appears that designers aren’t keen on doing anything very radical.

As are many other home cinema projectors, the Optoma UHD300X is a cereal box scale enclosure fashioned from high-quality gloss plastic with a cluster of buttons on the upper surface.

That’s not a mass that you want free-falling on to your head, so we’d recommend you have it professionally mounted to the ceiling should you like your brain to remain intact.

This design can be placed on a table and also back project, should you have another unused room behind the viewing one that you can use for that.

Both the focus and zoom are manual, and vertical keystone adjustment is via the remote control, with no horizontal keystone. In addition to those controls, there is also an additional lens shift dial that allows the optics to be tilted +10 degrees in the vertical plane.

This helpful control enables the image to translate up and down a wall without having to adjust the vertical placement of the projector or mess with the keystone settings.

Another design feature that all projectors appear to have now is a USB port provided to offer 5A of power to a dongle, like the Google Chromecast. It is worth noting that if you want 4K casting from the Chromecast Ultra that device isn’t powered by a USB cable like the original Chromecast.

What also refreshing to see with the UHD300X is that Optoma might have used the same Texas Instruments XPR technology chip as its competitors, but the specifications reveal that the designers of this product were determined to choose their own path.

Both the BenQ TK800 and ViewSonic PX747-4K shared output positions, suggesting they used the same mainboard, and also has identical optical throw ratios. The UHD300X has an entirely different output arrangement on the rear, and the throw ratio is not the same as the competitors.

The first bonus of being different philosophy is that the UHD300X includes SPDIF optical out for audio extracted from the HDMI input.

The inputs are identical to both of those competitor products, offering VGA alongside two HDMI ports. One disappointment of this arrangement is that only one of these ports is capable of 4K at 60Hz, where the other can only do 30Hz at that resolution.

Therefore if you have two or more sources that can generate 4K at 60Hz investment in a switch will be a prerequisite to connecting them up. And, to make that work reliably you may need an HDMI switch that can actively power the data lines if the sources are more than a few meters away.

Overall, our initial impressions of the UHD300X are positive. It’s well constructed, comes with a lens cover and a nice backlit remote, and has enough ports in and out to suffice in the home cinema role.

However, with some competitor designs having more lumens to play with we needed to put the UHD300X through its paces with 4K content before deciding where it fits into the budget home cinema landscape.

One aspect that caught us slightly off guard was the menu system that Optoma uses on this, and its other projectors.

It’s a common style that offers significant advantages to anybody familiar with Optoma projection products, though that can be a little perplexing on occasion.

For example; the Menus have “3D” settings permanently greyed out. This menu option is locked because this model won’t do 3D unless the image is pre-processed into chromatic 3D on the connected PC.

And, if you have a Windows 10 PC and activate ‘HDR and WCG’ mode in the display menu, then from that point onwards you can’t access any of the alternative display modes (Cinema, game, etc.) on the menu, it becomes fixed in HDR mode.

Once you understand these idiosyncrasies, the UHD300X is relatively easy to configure, but it can elicit a little head scratching at first.

Firstly, Optoma deserves some credit for admitting in the specifications that this projector has a native resolution of 1080p. Many of the competition tries to claim a natural resolution of 4K when they all using the same pixel shifting Texas Instruments DMD.

The methodology of pixel shifting is that four images are shown in rapid succession with a slight offset, that combined emulate 4K output. That might seem cheating somewhat, but it works well enough that certified Optoma can use the official 4K logos as approved by the independent Consumer Technology Association (CTA).

While it is generally accepted that the output of this device isn’t on par with a native 4K DMD chip, it’s substantially better than 1080p and about a third of the price of the cheapest native 4K hardware.

In this model, Optoma has a CMS or Colour Management System that allows you to make adjustments for the pigment of wall paint you are projecting on, and also enabled the best Rec.709 coverage for the selected brightness.

Our tests revealed that the lamps 2,200 lumens translate into about 570cd/m2 at maximum brightness and about half that in Eco mode. How bright you need to set the UHD300X up to get a strong image is entirely dependent on how far back the projector is and also what the prevailing lighting conditions are.

In our testing, the sweet spot without an entirely darkened room is 100in from an 8ft throw, and European homes don’t often have rooms substantially larger to allow longer throws.

The colour representation is exceptionally good, especially with HDR content. And, it didn’t exhibit any brightness flaring when bright elements appeared in a dark scene. There is a mild tendency to reveal a grey border around the image, but this happens to some degree on all the solutions we’ve seen that use the same XPR technology.

If you want to impress yourself or others, present a Pixar movie like Coco or The Incredibles in 4K, and subject your eyeballs to the rich colours and subtle details that abound.

Compared with the alternatives, the UHD300X hits a fine balance between colour representation and brightness, where neither of these objectives stomps on the other.

For gaming, lag can be a big issue for projectors. The lag experienced on the UHD300X is about 30ms, a level that might seem horrific on a monitor, but for a projector isn’t at all bad. Link a Sony PS4 and plenty of colourful 4K fun is just around the corner.

Fan noise is very low even at maximum brightness, and typically in ECO mode, it was just 10-12dBA. For the money, this is easily the best output we’ve seen, and better than some expensive projectors.