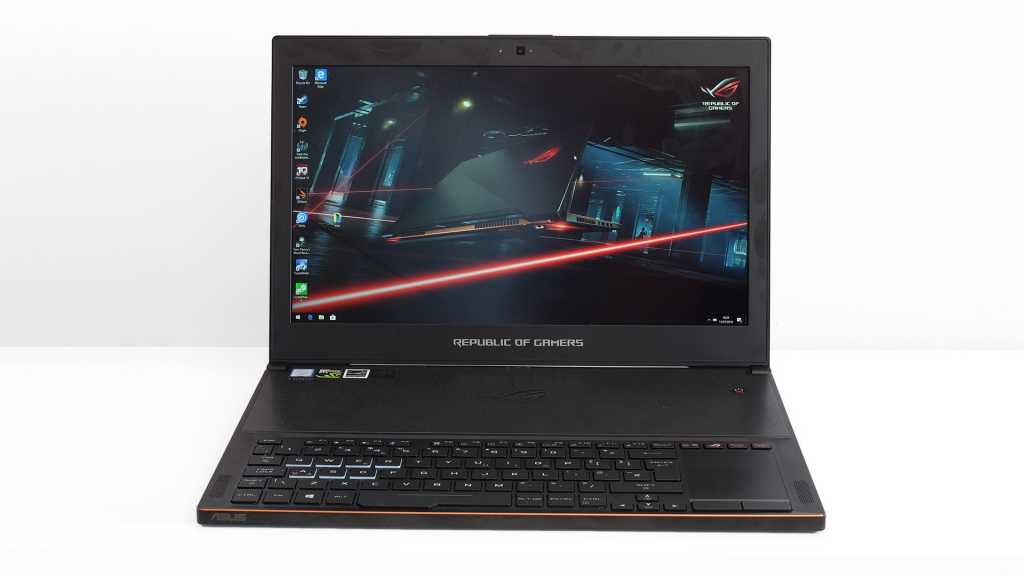 The Asus ROG Zephyrus GX501 is one of the best slim laptops with enough power to satisfy serious gamers. A lot of thought has gone into making the tech work as best as it can in a slim form and performance is insane when you consider the laptop is under 20mm. However, there are some elements to consider. The keyboard is unusual, the battery life is very poor and chunky rivals like the Alienware 15 have actually become lighter and slimmer in the last year. It does not mean Asus’s engineering team deserves any less praise for its work. You just need to consider whether you’ll really appreciate the Asus ROG Zephyrus GX501’s 2.2kg weight and 2cm thickness enough.

This Asus ROG Zephyrus GX501 proves you don’t have to put up with a 4.5kg gigantic beast of a machine if you want top-end gaming performance. It has a Max-Q GTX 1080 graphics card, among the most powerful available in a laptop, but is under 20mm thick.

There are compromises. The keyboard is as shallow as that of a skinny laptop, and sits at the front. Its ergonomics are odd. Battery life is terrible too.

However, it’s the best ultra-powerful gaming laptop of this size. The Asus ROG Zephyrus GX501 is more practical than the rival Acer Triton 700, with a more useful trackpad and better heat management.

Some of you are probably here out of sheer curiosity, because the Asus ROG Zephyrus GX501’s price puts it out of reach of most of us.

This is an extremely powerful laptop. It has a GTX1080 graphics card, Core i7 CPU and 16GB RAM. In the UK your main choice is between a 512GB SSD or a 1TB one.

The difference is a reminder of quite how expensive high-end SSDs are. Or, at least, how expensive SSD upgrades from big laptop makers are.  Some bundles also include a headset and mouse, to get you fully kitted-up.

The GX501 comes with a 2-year warranty, and you have to send it to a service centre should a problem arise.

Check out our chart of the best gaming laptops.

The Asus ROG Zephyrus GX501 is not a normal laptop. To fit a large graphics card and enough cooling to make it function properly, Asus has had to play around with where the core parts of the computer sit.

The top half of the base is given over to the GPU and other internals, shifting the keyboard to the front. It looks and feels strange like the Acer Triton 7000. But Asus has done a good job of making the GX501 seem relatively normal. There are no windows onto the internals, and the entire upper area is perforated plastic.

This helps the heat dispersal system, and stops that heat from transferring too quickly to the nearby metal. You see, some parts of the Asus ROG Zephyrus GX501 are aluminium. The keyboard surround and lid are metal, making sure all the right parts feel expensive.

The lid’s texture is brushed in two opposing directions, to give it a more eye-catching look than the average laptop.

But how portable is the Asus ROG Zephyrus GX501? This is a 15.6in laptop with a substantial screen surround. It’s no Dell XPS 13. At 2.28kg we wouldn’t want to take it out all day, every day.

However, compared to the Alienware 15, it’s very portable. That laptop is 1.3kg heavier and 50 per cent thicker. The GX501 is only 17.9 mm thick – if you want something thinner then check out the  Asus ROG Zephyrus S, which is the thinnest gaming laptop in the world.

There’s yet another oddity to the design too. When you open up the lid, a hatch opens up on the underside, the equivalent of a very large air vent. We’ll be honest: on first seeing this we thought Asus might have sent us a broken sample.

This panel is plastic and slightly flex-happy, making it seem out of place in a laptop this pricey. However, it’s a crucial part of making a laptop as powerful and thin as the Asus ROG Zephyrus GX501 work in a practical sense. There’s a lot of heat to dissipate, so large vents are needed.

One element you can be sure of: for the first few days, the Asus ROG Zephyrus GX501 will feel strange. While the keyboard’s button arrangement is standard enough, that it pushes you further away from the screen is initially off-putting.

Asus does help out with a wrist rest, though. This is simply a slab of rubber that sits in front of the keyboard. It doesn’t hook onto the laptop, but definitely helps.

The keys are high-quality, with a decent amount of resistance. However, they are of a standard, slim 1.4mm-travel chiclet design. They feel more like good ultrabook keys than the meatier, deeper style some gamers may want.

That said, the space key does have a slightly different action, which is a nice touch.

There’s also a backlight. Like the best gaming laptops, it can adopt any colour you like. And you can choose one shade for the WASD buttons, another for the rest. There are also the usual “animated” settings, which pulse or cycle through different colours.

The trackpad is perhaps odder even than the keyboard. It sits to the right of the keys, a portrait-aspect pad with two big, deep buttons below.

This is Asus making the best of a bad situation and it has done pretty well. The main issue is we found was continually press the “>” button instead of the left mouse button, our fingers being used to a wider pad.

However, you’ll probably want to use the Asus ROG Zephyrus GX501 with a mouse anyway. When doing so, you can switch the trackpad into a NUM pad with the press of a button. Red characters appear below the pad’s surface which looks really cool.

They’re not as ergonomic as real buttons of course, but it’s a smart way to avoid too much compromise or wasted space.

The Asus ROG Zephyrus GX501 has a 15.6in 1080p LCD screen. It sounds pretty conventional, but has some impressive extras.

This display has G-Sync, a hardware-based equivalent to screen tear-killing V-sync, and a brilliant refresh rate of 144Hz. Asus also says the response time is just 3ms, perfect for fast action.

These specs are usually associated with TN panel screens. Asus calls this an “IPS-level” panel rather than specifying IPS. There’s a little more contrast loss at an angle than a traditional IPS screen, but it does otherwise have the alluring look of this popular screen type.

Colours look rich, contrast deep, and as it’s a matt screen you don’t have to worry as much about reflections. All excellent elements for a gaming laptop.

The Asus ROG Zephyrus GX501’s screen is not an ultra-wide gamut display, though. It covers 82.7 percent of sRGB, 60.3 percent of Adobe RGB and 64.6 percent of DCI P3. This means it’s not perfect for colour graders or professional photographers, who’ll likely want at least 100 percent sRGB coverage.

Initially, it doesn’t seem great for the price. But until we took out our colorimeter, there was no sense the Asus ROG Zephyrus GX501 is undersaturated. It looks great, and doesn’t make games or movies seem remotely lacking in visual energy.

You’ll see similar compromises in Razer’s top-end Blade 15. You can either get a 144Hz “sRGB” screen or a richer 60Hz one matched to Adobe RGB. For competitive gamers, a faster screen refresh with quick response time matters more.

The Asus ROG Zephyrus GX501 screen is also very bright, reaching 365cd/m2. You won’t need to use anything close to max brightness indoors.

This is the main event, performance. The Asus ROG Zephyrus GX501 has an Nvidia GTX1080 Max-Q GPU. “Max-Q” is a graphics card design for slimmer laptop frames, sacrificing a little performance in the process.

However, the Asus ROG Zephyrus GX501’s gaming power is still sensational. It’s a thin laptop after all!

These are similar to the result from a desktop PC with a full-fat Nvidia GTX 1070. Yes, this isn’t true desktop GTX 1080 performance, but for a laptop this thin and light the results are still excellent.

Asus’s cooling system also works better than those of other powerful thin and light gaming laptops. While the GPU section up top gets quite hot, relatively little heat bleeds into the keyboard. And it’s significant quieter than other ultra-slim models too.

The “hatch” vent on the bottom is quite bizarre, but has real benefits.

Other elements of performance are also very good. The Asus ROG Zephyrus GX501 has an Intel Core i7-8750H processor. This has six cores and twelve threads, and in all the game test we tried it didn’t get closed to maxed-out. It’s unlikely to prove a performance roadblock in any but the most CPU-centric titles.

The Asus ROG Zephyrus GX501 scores 5689 points in PC Mark 10, the best result we’ve seen to date in a laptop. Similarly, its Geekbench 4 score of 21862 is the highest we’ve recorded in a laptop.

However, at this point it’s worth highlighting want you can get if you “go fat”. At a similar price the Dell Alienware 15 has the i9-8950HK CPU, which is up to 20% more powerful.  Don’t worry about this difference too much if you’re mostly a gamer, though. It’s GPU performance that matters most.

General performance is excellent, in part thanks to the ultra-fast SSD. It reads at 3202MB/s and writes at 1754MB/s, up to six times faster than a solid external SSD.

Few people will buy the Asus ROG Zephyrus GX501 as a work machine. But it can be one if you like. There are four full-size USB 3.1 ports and a Gen 2-speed USB-C, as well as a full-size HDMI.

You don’t need a desktop dock to fill-in connections sacrificed in favour of slim build. However, there is no memory card slot, which some of you may want.

The Asus ROG Zephyrus GX501 doesn’t have speakers to do justice to games and movies, either. While loud enough, these speakers have virtually no bass. Asus has tried to make them seem meatier with a prominent mid-range, but these are ultimately not great speakers. Headphones or speakers are a must.

Battery stamina is one other big black mark you have to consider. In the last couple of years we’ve seen a few mid-powered gaming laptops with amazing battery life, like the Dell Inspiron 15 7000 Gaming, which can go for almost nine hours.

The Asus ROG Zephyrus GX501’s longevity is poor. It lasts an hour and a half when playing a movie at 120cd/m brightness, which is way off the maximum backlight level.

This is a reminder that while Intel and Nvidia have worked some minor magic in letting such high-power components work in a slim laptop, there are still compromises. The Asus ROG Zephyrus GX501 is a portable laptop in the sense it is relatively easy to move between places with power outlets. But, whatever you do, don’t buy one of these expecting it to last like a MacBook.