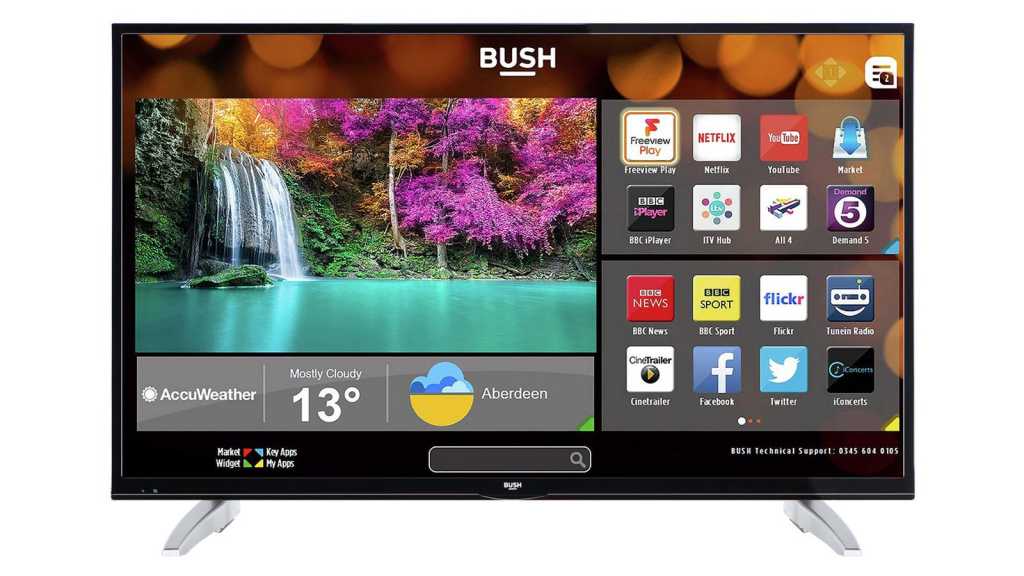 With the Bush, you get what you pay for: no more, no less. If you really want a 4K TV, it is capable of producing crisp, detailed pictures with natural-looking colours. It isn’t the brightest, nor does it have the best blacks, but it is acceptable. The smarts are below par, and you don’t get Amazon Prime Video, but if you’re happy to hook up an Amazon Fire TV or another set-top box that gives you the content you want, it’s a decent TV for the money.

4K TVs are quickly replacing Full HD models in manufacturers’ ranges, and that’s true even of budget models. And while traditional broadcasters have yet to start beaming 4K signals over the air, there’s a wealth of 4K content available from Netflix, YouTube, Amazon Prime Video and other sources.

But if you are on a tight budget, should you even be looking at 4K models? Bush’s 49in offering suggests you should, but is it any good?

It also comes in 43- and 55in versions, and you can buy each of them from Argos:

These are undoubtedly low prices for the sizes and specs, but make no mistake: these are pared down, budget offerings. And don’t mistake for the very similar looking older models, which don’t have HDR in their names.

You may find you can pick up old stock from the middle of other manufacturers’ 2017 or even 2016 ranges at similar prices. One is HiSense’s H49N5500, which is £349 from Currys. This has similar specs, but includes the decent VidaaU interface.

For more alternatives, see our roundup of the best TVs.

With all-plastic construction, you know from the moment you extract this TV from its box that it is built to a price. The plastic flexes, as does the screen itself if you put any pressure on it.

The upside is of course that it’s light weight and can be moved around – even wall mounted – with ease. Screws for the 200×200 mounting points are included as well.

The screen is fairly reflective, so you won’t want to have it pointing at a window, and the slim-ish bezels are gloss black.

It’s good to see a complement of three HDMI ports, though the manual doesn’t specify whether all three support HDCP 2.2, or just one of them.

HDMI2 supports ARC, which could be handy as you’ll probably want to mute the rattly built-in speakers and use a soundbar or other external sound system. But if you don’t have a hi-fi system that takes an HDMI input, there’s also an optical S/PDIF and 3.5mm headphone jack.

Bizarrely, there are VGA and composite video inputs, which are out of place on a 2018 UHD TV.

Annoyingly, two of the HDMI inputs face out of the back panel, which means it’s impossible to mount the TV flush against the wall if you want to use them.

Usefully there’s Wi-Fi as well as an Ethernet socket, but keying in your Wi-Fi password with the remote control is a pain.

Setup is simple: use a screwdriver to attach the supplied feet, plug in the captive 1.35m power cord and connect a suitable aerial for the Freeview HD tuner and use the remote to enter your choices on the installation wizard.

The fact the two feet are so far apart means you will need a surface at least 93cm wide: it would have been far better to have a central stand.

Though this is billed as a smart TV, don’t expect a slick interface. Instead of a built-in operating system as you get with most modern sets, the Bush relies on a website to present its apps and a weather forecast.

That means there’s no Home button: you have to use a variety of buttons on the remote to get to the function you need.

And you’ll have to spend some time learning what the buttons on the remote do, as quite a few of them are far from obvious. For example, instead of the expected AV button, there’s a game pad and a computer icon.

The web interface isn’t particularly useful unless you want to get to some of the apps such as iPlayer, ITV Hub, All 4 and Demand 5. These are present because this TV has Freeview Play built in. That allows you to rewind back through the programme guide and choose content that’s available on-demand.

The remote control is good, with chunky rubber button which include shortcuts to Netflix and YouTube, but there’s currently no Amazon Prime Video app and apps can’t be downloaded despite a ‘Market’ icon.

You can’t expect too much from a budget TV, but the Bush delivers a sharp, colourful picture that’s pleasing to watch.

Better still, viewing angles are no worse than you’ll get with LED TVs costing twice as much. There is the expected drop in brightness and saturation as you go more than 30 degrees from centre, but the image is still perfectly watchable.

The set’s claimed 50Hz motion rate is one sign of the low price, but so is the fact there is no motion processing to speak of. What this means is that there’s no smoothing out of movement, so you do see some blurring when there’s fast-moving action. It’s worth noting the panel itself will run at 60Hz, in case you want to use it as an inexpensive PC monitor. But remember that some graphics cards will be able to output only 30Hz at 4K if they have HDMI 1.4 outputs.

Picture options are the bare minimum, too, and there’s no way to make the TV remember the settings for a particular source: if you adjust brightness for ‘Natural’ mode, that’s how it will be no matter what the source.

As with just about every TV, if you do buy one, turn down the Sharpness from the default setting to around 10. This will reduce the haloing and artefacts caused by too much sharpening.

There are a couple of other negatives, too. Contrast isn’t wonderful: we measured 524:1. It’s also not very bright at just under 200nits. Combined these mean that it’s somewhat disingenuous to call this an HDR TV. Certainly, it is very hard to tell the difference between standard 4K content and HDR footage.

Blacks are acceptable, mainly thanks to the low overall brightness, but as you might expect they don’t compare to more expensive TVs.

The final niggle is sound quality. Again, don’t be fooled by the DTS TruSurround HD branding – the pair of 10W speakers aren’t great. They’re fine for dialogue or a football match, but music tends to make them distort and rattle, even at fairly low volumes.