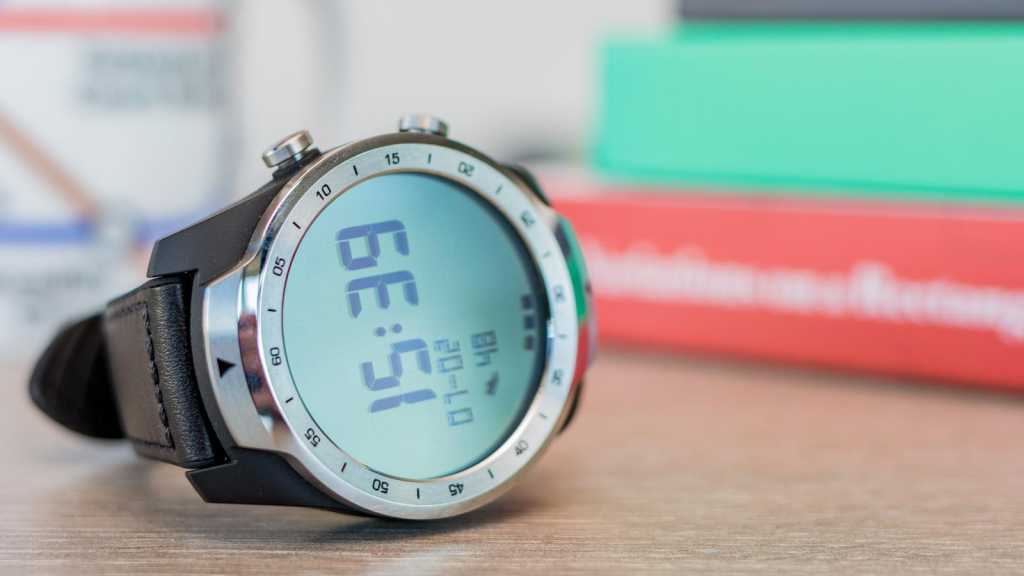 There’s ups and downs when it comes to the Ticwatch Pro. For starters, the design leaves a lot to be desired and the watch will be too heavy and chunky for some. However, we love the innovative dual-screen design so you can easily get information with the basic LCD panel and then use the OLED display like normal the rest of the time. This works better outdoors, saves battery and means you still have a functioning watch when the battery is too low. Performance isn’t the best and we found step counting a bit out of whack. That said, if you want something cheaper than many rivals with GPS, NFC and a heart rate monitor then this could be a good choice.

The number of new smartwatches being launched has decreased a lot of the last year or so. The Apple Watch may be hard to beat but there are still fresh devices hitting the market occasionally. This Ticwatch Pro is just one and has an innovative dual-screen design. Here’s our full review.

Smartwatches come in a large range of prices so you can spend under £100 or splash out thousands, too.

In the UK and US, the watch is an Amazon Prime exclusive ( get a free trial here) until 15 August and will then be a general exclusive at Amazon until 30 September. Order it here in the UK, and here in the US.

The Ticwatch Pro is £219/$249 so it’s not exactly a budget wearable but it’s still affordable. If you are looking for something cheaper, we’ve recently reviewed the £145 Ticwatch E and £150 Ticwatch Sport. 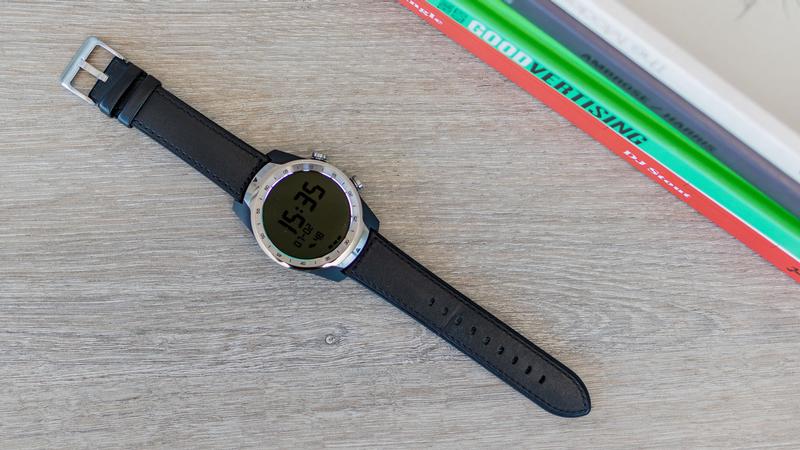 Whether you should buy a smartwatch significantly depends on whether you like the style and design of it. We can’t tell you what to like but we can explain what’s on offer here.

The Ticwatch Pro is bigger and chunkier than the other models we’ve reviewed from the firm. It’s a whopping 12.6mm thick and weighs 77g including the strap. This isn’t a watch for those with a small wrist.

It’s large shiny metal bezel (also available in black) is the striking feature, adorned with numbers and lines. The bezel doesn’t rotate and there are two metal buttons on the side which are easy to use.

The most interesting things is invisible and relates to the screen – we’ll explain all below. 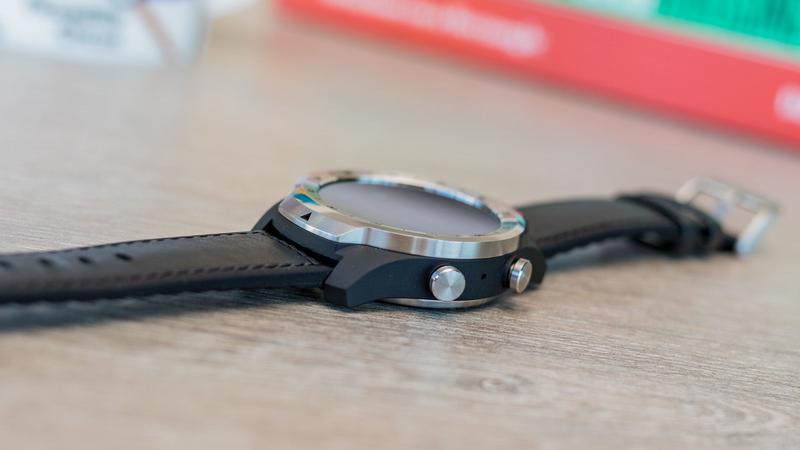 It’s also metal at the back but sandwiched in-between is a boring nylon section which apparently covers carbon fibre. We’d rather see the carbon fibre!

Like many smartwatches, the Ticwatch Pro is IP68 rated so it’s full dust- and waterproof. You can, according to the firm, submerge it in water up to 1.5m for up to 30 minutes – swimming is not recommended, though.

It’s normal to have a quick release strap but it’s unusual to find a hybrid combination of materials. The strap is leather on the outside and silicone on the back where it makes contact with your skin. We weren’t sure about this at first but it’s something that’s grown on us.

The watch snaps into the magnetic charging dock nicely, but the dock itself is like many we’ve seen as isn’t heavy enough to stay put on a flat surface so you might want to stick it down somehow.

Overall, the Ticwatch Pro is a bit of a let down in this area with most rivals on the market offering better design and build. It is cheaper, though. 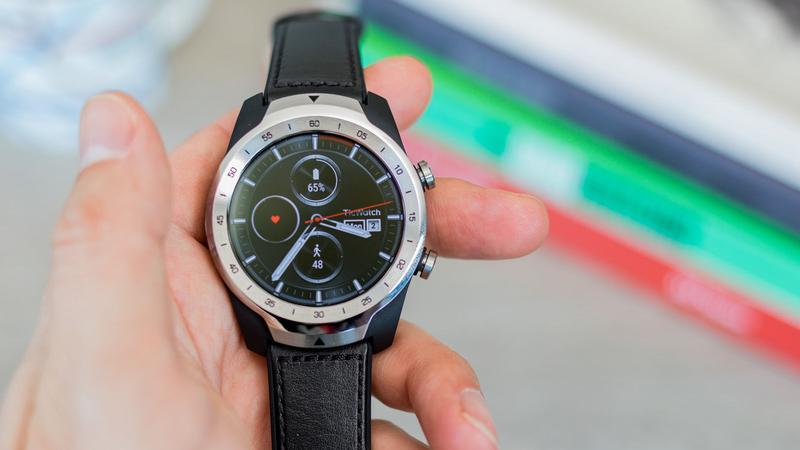 The most interesting thing about the Ticwatch Pro is that it has two screens. You’ll struggle to find them because they’re actually layered on top of each other.

Like many smartwatches, the device has an AMOLED screen. It’s 1.4in with a decent resolution of 400×400. However, the clever thing is that a TN LCD display sits on top. This is patent pending.

So when you’re using the Ticwatch Pro in its entirety with Wear OS, you’ll be using the bottom AMOLED screen, but when you’re not the LCD display is there to show information like the time, date and step count.

It means you have to wake up the power-hungry OLED for those basics. A small niggle is that we found the full-blown screen to timeout too quickly and there’s no way to adjust it in the settings. 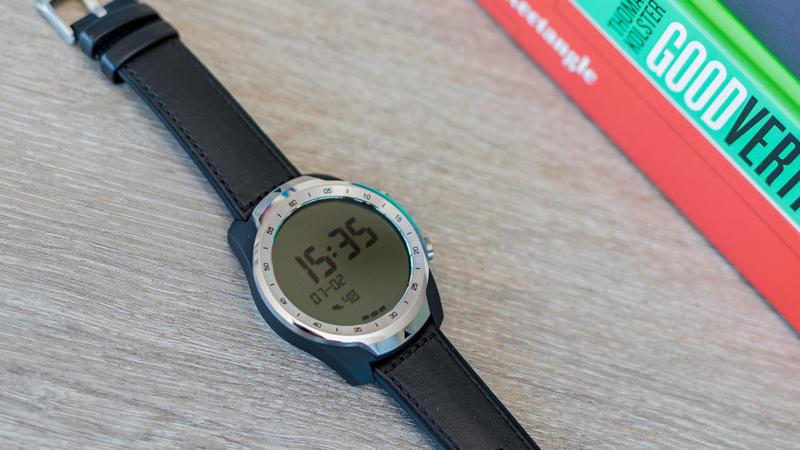 It creates an always-on sort of feature but also means you can still use the watch when the battery is too low to power the full colour screen. So despite having a 415mAh battery, you can use the Ticwatch Pro for up to 30 days if you just use the basic screen.

In general use, we found battery life using a combination of the screens to be around four or five days which is pretty good. The second display means you’re not left with a useless lump of watch on your wrist which is a real boon and its easier to read outdoors.

Onto more boring specs, which don’t vary much in the smartwatch world. The Ticwatch Pro has a pretty standard combination of a Qualcomm Snapdragon Wear 2100 processor, 512MB of RAM and 4GB of storage. The latter means you can store music as well as apps.

As well as a bunch of the usual sensors, the Ticwatch Pro has both GPS and an optical heart rate monitor. They work well in general but the step counting can be a bit generous, often adding around 20-30 steps when we only did 10. 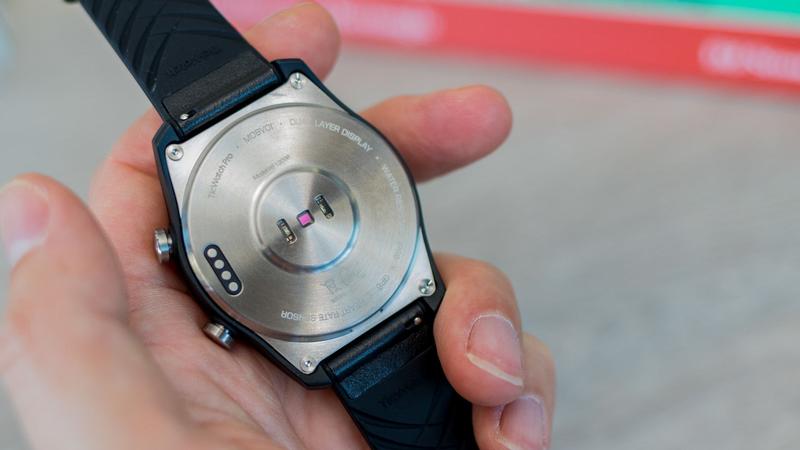 With Wear OS (version 1.3 here) the device is just like using other ones with Google’s operating system really. There’s not the same level of diversity when compared to phones running Android. It runs ok on the Ticwatch Pro but opening some apps can take a little while.

It’s a shame to find only a handful of different watch faces but you can download any of thousands from the store.

The main draw here apart from the dual-screen tech is fitness, hence the hybrid strap. There’s a confusing amount of pre-loaded apps to choose from though with both Ticwatch and Google. The list includes: Fit, Fit Workout, Fitness, Health, Heart Rate and Step Ranking so it’s hard to know where to start.

What’s no obvious is that the Ticwatch ones utilise the basic display where Google’s do not. This means you can get info during a session easier and the battery drain isn’t as bad.

There are plenty of other apps so you can use the watch for far more than just fitness and download whatever you want from the store.