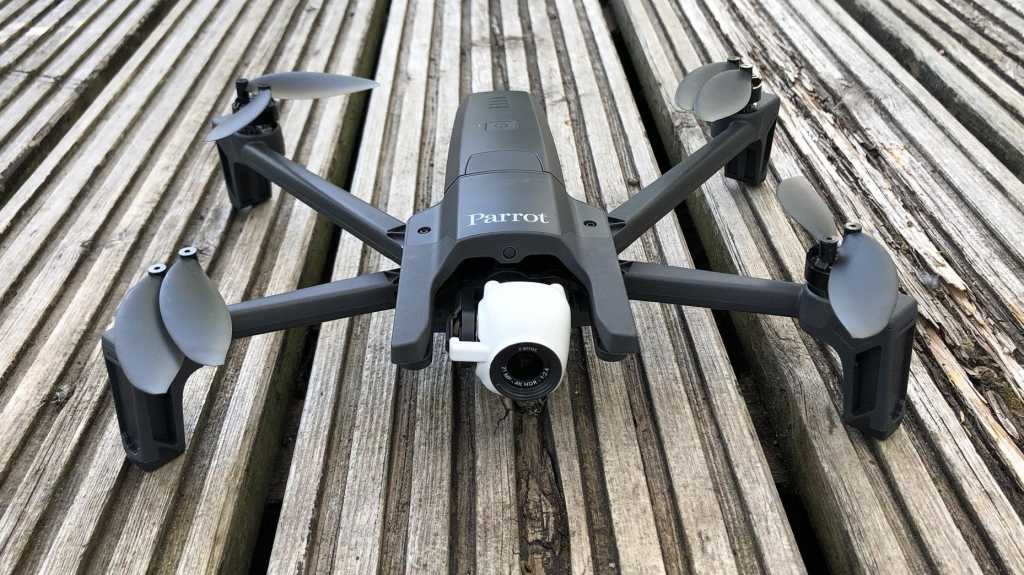 With a 180-degree tilting gimbal, a battery that charges via USB-C and the ability to record 4K HDR video, the Anafi is a well-priced drone. It can capture great 4K HDR video and detailed photos, but hides away other features behind in-app purchases.

We weren’t the biggest fans of Parrot’s Bebop drones which, like the AR Drone before it, had fixed cameras and fixed, non-folding bodies.

That meant they were cumbersome to transport, and lacked the gimbal-stabilised footage that looked so good from rivals.

Now, though, the Anafi takes things to a new level where Parrot can (almost) compete with DJI. It even has a few features that the Mavic Air doesn’t, such as 4K HDR video, a gimbal that can point upwards, lossless zoom that you can use in-flight and optional FPV support.

However, it also has a few drawbacks which might make you choose the Mavic Air instead.

That includes the drone, one battery, a carry case (for the drone), a controller, a 16GB microSD card and a spare set of propellers.

You can buy it from Argos in the UK, plus Parrot’s own site and Amazon in the US.

There’s also the Parrot Anafi FPV, a newer variant of the drone that comes with a smartphone-powered headset to get a close-up view of the camera feed and a handy rucksack to keep all your accessories safe. That costs £100 more at £729.99/US$799, but if you intend on using the Anafi professionally, it may be worth the upgrade.

Spare batteries cost £89.99/US$99.99 each and are available already. Handily they charge via USB-C and can be recharged from a power bank on the move.

This is Parrot’s first folding drone, and the mechanism where each leg clicks into place by pulling it outwards from the body is simple and quick.

The fact none of the legs flip over (as they do on the Mavic Air) means the Anafi is a bit bigger and takes up more space. Yet, it’s still small enough to pop into your rucksack and still have room for your other gear. 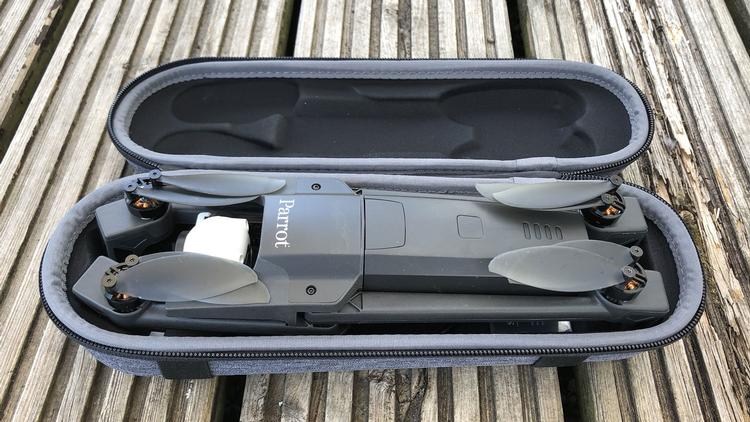 Of course, if you spring for the Anafi FPV, you get a small backpack with dedicated areas to store your drone, controller, headset and other accessories. Think of it as your drone go-bag, allowing you to grab the drone on the way out without a second’s thought.

If you don’t want to lug the chunky controller around, you can connect your phone to the Anafi’s Wi-Fi and fly it using on-screen sticks.

The controller lets you fly further, though, as it isn’t restricted by Wi-Fi range. Of course, range is usually limited by local laws, but the Sky Controller 3 at least gives you the confidence of a strong signal both for flying and also the video feed. 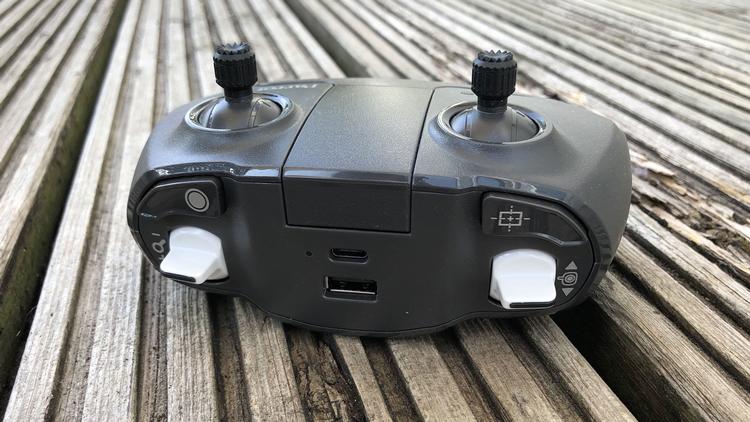 It also gives you easy control over the gimbal pitch and zoom – controls which aren’t easy to use with the app alone. The internal battery also charges your phone’s: you plug in your phone with its USB cable, eliminating the need to use Wi-Fi.

At just 320g, the Anafi is surprisingly light. This is a factor in its 25-minute flight time, which is more than you’ll get from a Mavic Air. 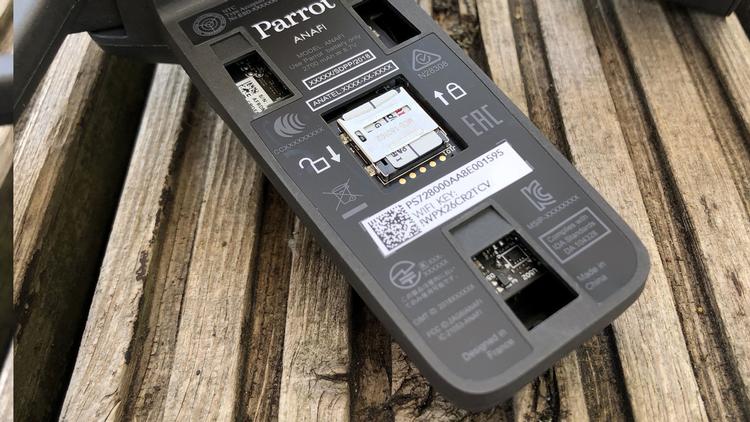 If there’s a niggle, it’s that the microSD tray (a flip-up locking mechanism reminiscent of the SIM tray in old phones) is under the battery, so you have to remove that before you can get to it. There’s no storage built-in, so if you forget you card – and you will – there’s no way to record video. Footage can be offloaded to your phone via Wi-Fi, but this is mighty slow, especially for 4K clips.

You’ll need the FreeFlight 6 app for that, and to fly Anafi. It’s much like Parrot’s other drone apps, and has the same annoyance that some features such as Follow Me and AutoPilot are locked out until you pay the not inconsiderable in-app fee.

Parrot says this is to keep the price of the drone down, but that argument doesn’t really hold water. Plus, there’s no such paywall in DJI’s app.

Flying the Anafi is easy with the Sky Controller 3, especially if you’ve flown a drone before, and the app features a range of tutorials if you need to brush up before taking flight.

There are four modes: Film, Sport, Cinematic and Racing, each providing different performance depending on the subject. Usefully you can limit how fast and how far the drone can fly. For beginners, a height and distance limit prevents the Anafi from getting too far even with errant control.

When filming, limiting the speed it can rotate and move forwards or sideways means you get smoother, more usable footage without having to have such delicate control of the sticks.

A big Return To Home button in the centre of the Controller adds confidence, but the lack of any obstacle avoidance can make flying a little tense unless you have a wide-open space with nothing to hit. You can adjust the altitude of the drone during RTH via the Settings menu, but this has to be done before activation.

The Mavic Air has front and rear cameras for sensing obstacles, which makes flying it less risky.

We found the video stream over Wi-Fi broke up at less than 100ft (30m) but with the Sky Controller 3, there were no such issues. It’s also good quality, with plenty of detail, which translates to great performance when using the optional FPV headset to get closer to the action.

The smartphone-powered FPV headset provides a tweaked UI that displays crucial information (telemetry, battery, GPS and shooting mode settings), but there’s also a minimalist UI that removes most on-screen elements for those who want to enjoy the experience of flight. 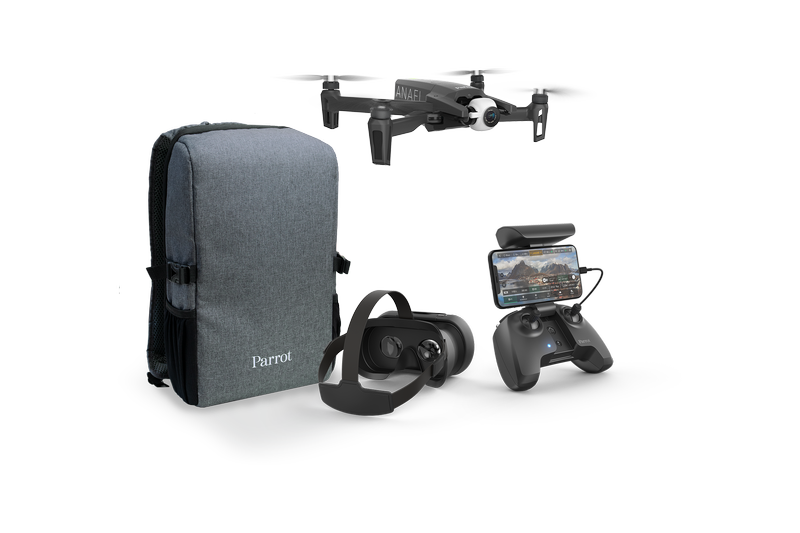 You’ll also find a button to access the Settings menu without removing the headset, and a button to toggle a video pass-through mode using your smartphone’s camera. There’s even an AR overlay that highlights the drone to help you get your bearings.

It certainly provides a more immersive way to capture your footage – especially in bright, outdoor environments where smartphone displays are hard to see. It’s not an instantaneous video feed with a delay of around 300ms, but it does provide full-quality video playback where others sacrifice detail in favour of reduced response time.

The Sport and Racing modes are there mainly for having fun, and though it isn’t quite as quick as the Mavic Air (nor as quick to stop) it certainly has some pace.

There’s also an Arcade control mode that provides an experience akin to a first-person shooter. You control the angle of the camera with the left stick and control the direction of the drone with the right, and if you’re as good at playing games are we are, allows you to perform potentially complex manoeuvres more easily (as well as being a lot of fun to fly).

Even flying in relatively strong winds at 50m, the Anafi remained surprisingly stable, and didn’t drift. But flying at low altitude in confined spaces, it wasn’t quite as steady as we’d have liked.

There’s a camera an ultrasonic sensor underneath to prevent hard landings, but with hardly any ground clearance, grass can interfere with the bottom-mounted fan and even prevent take-off.

Parrot has tackled this issue by including a hand launch mode, which allows you to launch the drone from your hand after letting the rotors spin up for a few seconds. It’s always a bit daunting throwing a £629 bit of kit in the air, but the Anafi always manages to stabilise itself.

We’d like to see Parrot introduce warnings for no-fly zones in the app, as it currently recommends using a third-party app to find out whether or not you’re allowed to fly in your current location.

The big attraction for any drone intended for aerial photography is a good camera. And thankfully the Anafi has one.

Its 21Mp sensor offers plenty of detail, and allows for 4K video. That’s nothing new, but the fact it can shoot HDR video is: the Mavic Air doesn’t support it, and neither does anything else at this price.

Parrot is keen to point out that it’s also unique in its ability to be pointed upwards as well as down, letting you capture perspectives that you simply can’t on any other consumer drone.

Finding those perspectives is easier said than done, though, so it’s hardly an essential feature. Yet, it is a differentiator and can make your footage look very different from the top-down shots we’re all used to from drones.

The 4K video itself is on a par with the Mavic Air. It’s crisp, detailed and very stable. Like DJI’s drone, you’re limited to 30fps in this mode, but can step down to 25- or even 24fps. Drop to 1080p and you can ramp the frame rate up to 60fps for some slo-mo action, though that’s half of the 120fps the Mavic Air can handle.

HDR is a welcome feature, and it noticeably improves dynamic range especially when you’re trying to include both ground and sky in the shot.

Along with fully stabilised footage, the Anafi boasts a dynamic horizon mode that follows the movement of the drone, providing something akin to what you’d expect a bird to see when swooping through environments. It should provide a unique view when following fast-moving subjects like off-road mountain bikers, but that’s not something we’re really able to test in London!

While the Anafi’s footage was a touch overcooked at launch, Parrot has since addressed this and now captures more natural tones by default. You have the option of cranking up the saturation in the Settings menu if you like that look, though.

Our main criticism is that video is slightly noisy if you look closely, and that’s in sunny conditions. Still, most people are unlikely to see this even on a big TV.

Here is a screengrab from the 4K video to demonstrate the dynamic range on offer:

Thanks to the high-resolution sensor you can losslessly zoom in to 1.4x in 4K and up to 2.8x in 1080p, and there’s a setting in the app to choose whether to limit to lossless zoom or let you carry on into digital zoom. Bear in mind that zooming digitally noticeably reduces quality, though.

The 21Mp photos are very good, and you have the option of shooting in JPEG or DNG (RAW) format. There’s also the choice of saving the native photo, complete with barrel distortion and the ‘small earth’ feel or the corrected, cropped version which is probably what you actually want where lines that should be straight are. 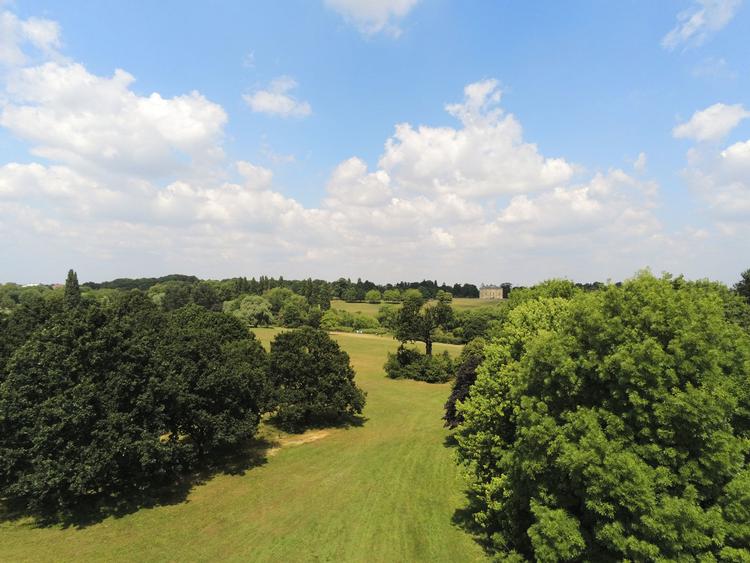 There are also several panorama modes including Little Planet and VR-ready 360-degree photos, but these can take some time (around five minutes) to take.

If you want to get creative, there are ‘SmartDronies’,  Timelapse and ‘CineShots’. These include the zoom effect where the drone flies towards you (or away) and zooms in or out to keep the subject the same size. It’s a complex cinematic effect used in films that you can now get in your own videos. DJI has incorporated the same ‘Dolly Zoom’ effect into the Mavic 2 Zoom.

The Anafi gives with one hand and takes with the other. It can capture great 4K HDR video and detailed photos, but hides away other features behind in-app purchases. There’s no obstacle avoidance either, but if you’re a confident pilot the Anafi will allow you to capture some stunning footage.