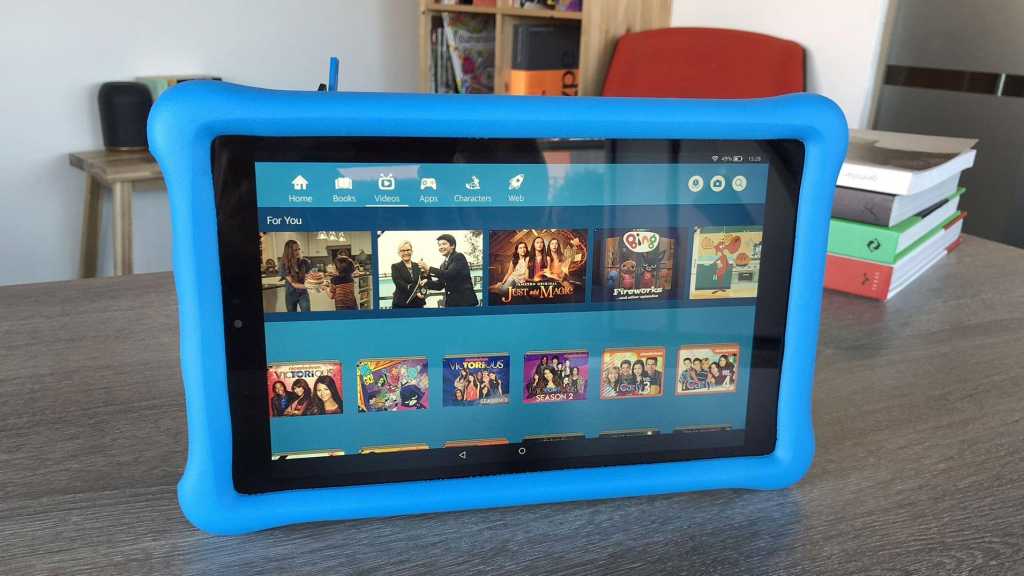 The Fire HD 10 is a decent, if unspectacular, tablet. It’s good value as a Kids Edition, but you can get the same warranty, content and bumper case with the 7- and 8-inch versions which are quite a bit cheaper. Parental controls are excellent, but it’s a shame they don’t all carry over to the full FireOS interface, which is better suited to older kids.

In October 2017 Amazon launched the Fire HD 10, which we said was a good deal for a 10in tablet if you could live with the slightly limited selection of apps compared to an Android tablet.

Eight month on and there’s now a Kids Edition version which costs more but comes with the usual bundle of extras including a 12-month subscription to Fire for Kids Unlimited, a 24-month warranty and a bumper case.

In the US it’s $199.99 from Amazon. and it’s additionally available with a yellow bumper case.

This is £50/US$50 more than the regular 32GB Fire HD 10, and that’s good value considering you’re effectively getting the case, the subscription and a warranty that’s twice as long and covers accidental damage.

However, don’t forget there are two other Kids Edition tablets in the range, and the Fire HD 8 offers the same benefits for £129.99/US$129.99. Obviously the tablet is smaller and less powerful, though.

We won’t spend much time here talking about the hardware: you can read about that in detail in our full Fire HD 10 review.

The Kids Edition is identical. It’s the software, warranty and bumper case which makes it a different product. 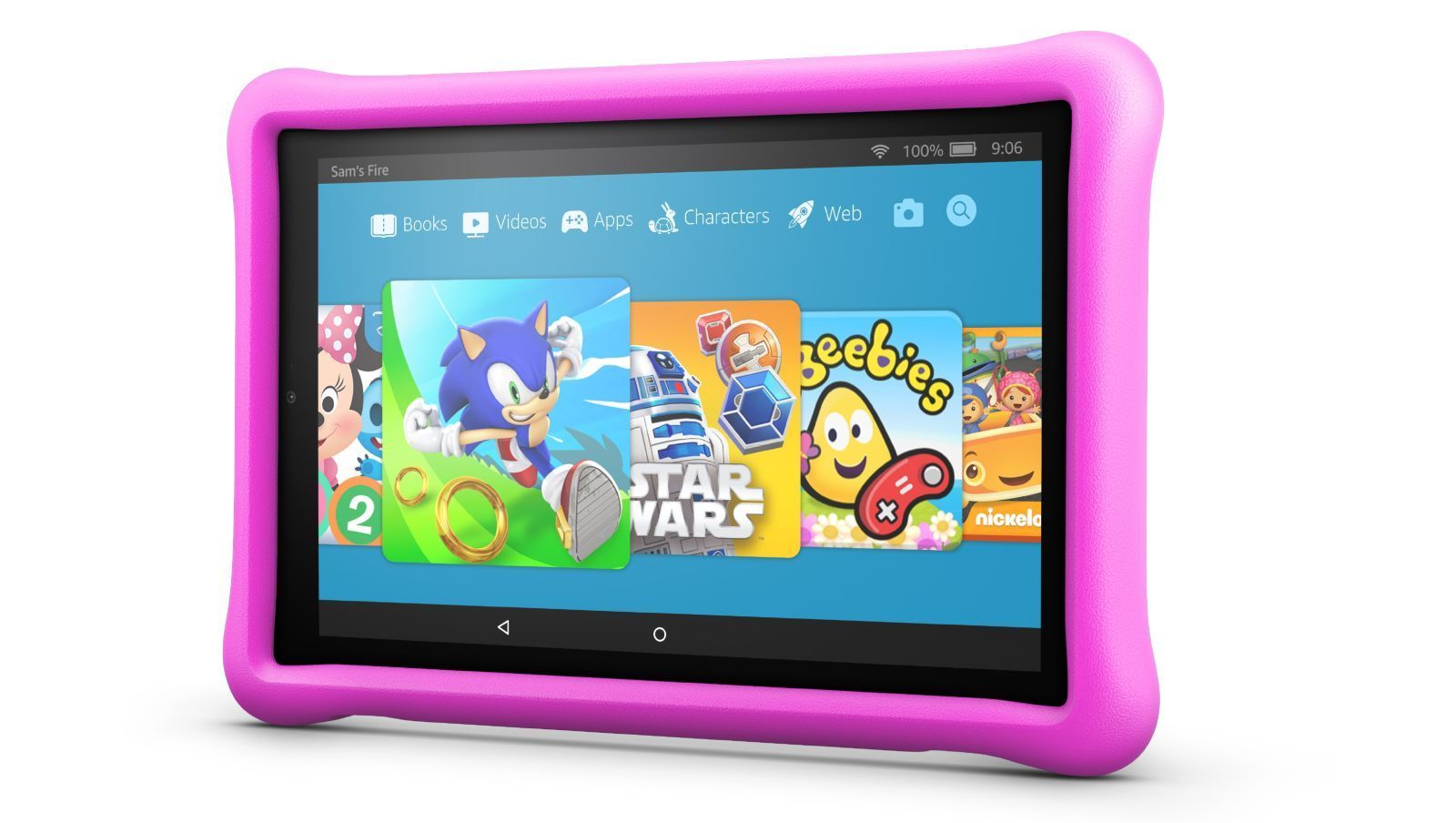 However, as we’ve said, that bundle of extras is the same as you get with the other Kids Edition tablets in the range, so it’s actually the tablet that you’re paying extra for.

To summarise, here are the key specs and differences between the three of them:

What you don’t get with the Kids Edition of the Fire HD 10 is hands-free Alexa. Alexa isn’t available in the Fire for Kids interface, which is a shame. Kids love using Alexa to ask questions and play music: we’d hoped there would be a child-friendly version of Alexa in the HD 10 tablet, just as there is a safe web browser that you can enable or disable.

To be clear, the tablet does have hands-free Alexa built in, but you have to switch to an adult account to use it.

Software is just as important as hardware for any kids tablet, and we’re big fans of Fire for Kids. (It’s called FreeTime in the US.)

That’s because it’s easy to use for younger children and it makes it easy for parents to choose which content is accessible.

On top of that, the Fire for Kids Unlimited subscription has improved over the last couple of years and now includes the seven Harry Potter books. But the selection is still too limited for our liking.

There’s nothing by Roald Dahl, Jaquelin Wilson or Enid Blyton, for example.

If your kids are already using the Kids version of Netflix, they may not be too impressed by the range of videos either, though you will find Horrible Histories, My Little Pony, Paw Patrol, Peppa Pig, Chuggington, Hey Dugee, Sarah & Duck, Teletubbies, Postman Pat, Kipper, The Gruffalo and the BFG films among lots of others. And all are available to download for watching offline.

It’s useful that you can whitelist apps from the parent account on the tablet. That means you can allow your child to use an app you deem safe but would otherwise be unavailable in the kids’ interface, such as Netflix or Amazon Video.

It’s also possible to whitelist websites in the kid-safe browser, but you should be able to rely on Amazon’s hand-curated selection of sites if you don’t want to configure anything.

Amazon has developed its parental controls so you can limit when the tablet can be used, whether your child must read before being allowed to play games or watch videos and you can also keep tabs on how they’re using the tablet from your own phone via the Amazon Parent Dashboard.

This isn’t a standalone app, it’s a web app so you can create a shortcut to it in whichever browser you use on your phone. 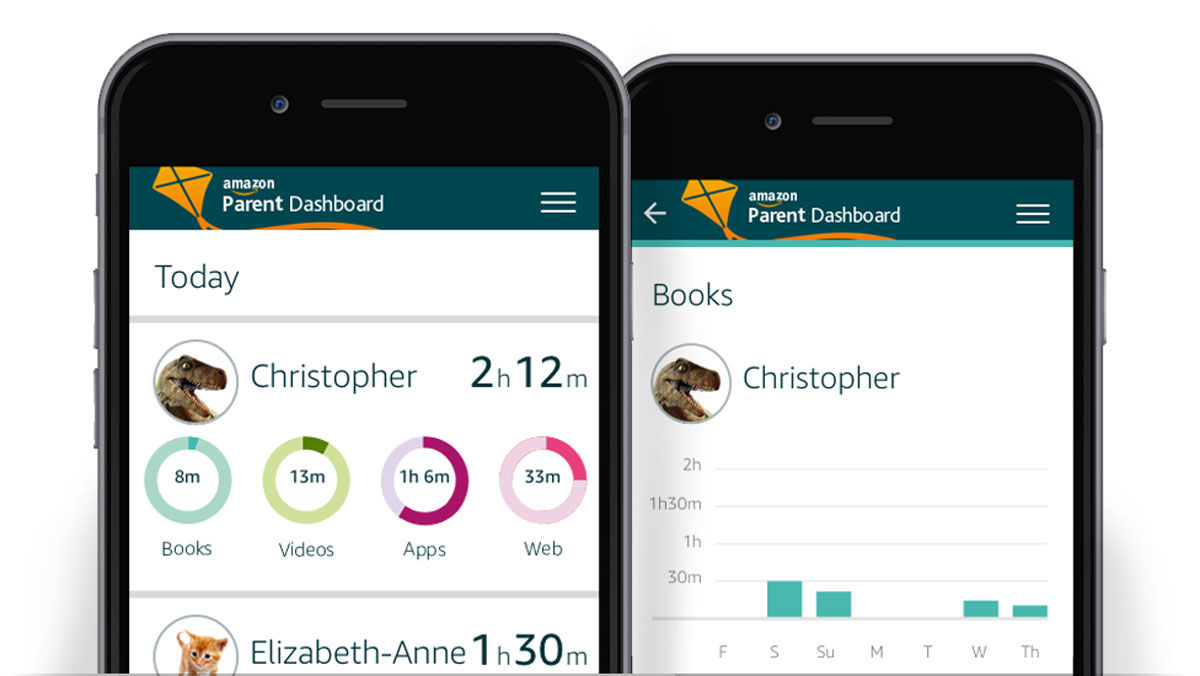 It shows you how much time your kids have spent reading, playing games, watching videos, using apps, browsing the web and listening to Audible.

Unfortunately, this works only if your child uses the Fire for Kids app (the kids’ interface) and not the normal Fire tablet interface. That’s a shame because from around age 8-9 kids won’t want to be restricted to the babyish interface and will want the ‘real’ tablet.

You can lock down the standard interface to restrict the use of different apps and services, but despite this activity from a standard profile still won’t show up in the Parent Dashboard.

There’s another thing to bear in mind if you’re buying the Fire HD 10 with a mind to letting your child grow into it as a proper tablet: this isn’t Android.

While Amazon’s operating system is perfectly nice, and an older child will be happy to use it, there are no Google services. The only thing you’ll find is the YouTube app, but no Gmail, no Google Maps, Docs or anything else.