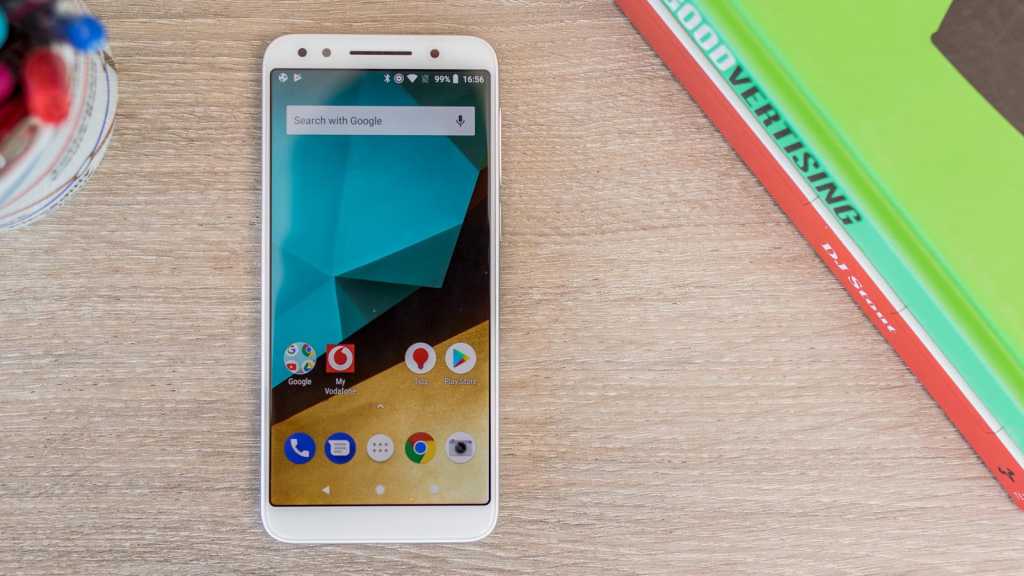 If you want a cheap smartphone on Vodafone in the UK then the Smart N9 is an OK choice. Buying it outright is an affordable £109 and means you don’t get tied into a contract and can pick up a cheap SIM.  But the budget phone market is crowded, and you might want to spend just £60 more and get the Moto G6 Play – a miles better phone in looks, performance and flexibility in that you can use it on any network.

Smartphones don’t have to bankrupt you when you buy them. The Vodafone Smart N9 is proof of that, but it represents the bare minimum of the phone world.

With 4G, cameras, fingerprint sensor, 18:9 display and Android Oreo 8.1 it technically has the same features as a phone six or seven times its £109 asking price. But don’t let the marketing fool you – this is a budget phone in performance as well as price.

If you only want the basics from your phone then it’s an option (as long as you’re OK being on Vodafone). For anyone who wants anything approaching a fast, capable smartphone, look elsewhere.

Vodafone sells its Smart N9 for  £109 on pay as you go and for free on  contracts starting at £18 per month.

This puts it at £30 more than the still-available  Vodafone Smart N8 and £90 cheaper than the Honor 9 Lite. The Honor phone has better specs though, and it’s worth considering some  other budget phones before deciding which is best for you.

The Smart N9 has a tall 18:9 screen, fitting in with the common 2018 smartphone trend. This means it can fit a 5.5in display without being huge.

The phone has a forehead with earpiece and camera and a small chin. There’s a fingerprint sensor on the plastic back (designed to look like glass) just below the camera.

A nice addition to the rim of the phone is a ridged design that’s very subtle and adds grip to what is otherwise quite a slippery, fingerprint-prone device. If you’re after a budget phone with a slim profile and a decent sized screen in a small body, this fits the bill.

Budget phones don’t have the high-end specifications and flashy features of more expensive handsets, but there’s some points to note for the Vodafone Smart N9. Nothing about it is particularly smart, though.

The phone measures 147.1 x 68.8 x 8.7mm and despite that thickness still manages to be pleasingly slim. It also packs in a fingerprint sensor on the back, which works pretty well to unlock the device and authenticate your identity in banking apps and more.

The 5.5in screen has a 720p resolution, so it’s not HD. This doesn’t matter on a phone this price but if you want to watch a lot of video on your phone you will notice the grainy quality.

For simple apps and tasks, the screen is acceptably bright but the lack of oleophobic coating on the screen means it gets greasy quickly. You’ll have to pay around £200 for a phone with a 1080p (that’s the lowest possible HD resolution) screen like the Honor 9 Lite.

If you’re buying a budget phone, you’re not going to be too worried about its specs and performance. But still be aware that In everyday use, the Smart N9 was very slow even compared to other cheap phones.

It has a Mediatek MT6739WA processor, a low power chip similar to the one found in the Alcatel 3V. It’s cheaper but noticeably less capable than the Qualcomm Snapdragon 430 in the Moto G6 Play.

2GB RAM on board is certainly better than 1BG, but it’s pushed to its limits beyond the simplest tasks. And with just 16GB storage, there’s not an awful lot of room for apps. Then again, it can’t run large demanding games.

Sure, £109 is not a lot to pay for a 4G capable smartphone, but you’re only going to want to do one thing at a time on the Smart N9. It can cope with Facebook, email, text and calls but any app more advanced grinds the phone to a halt.

Even tapping to open the on-screen keyboard can cause a delay of about three seconds, which can become tiring. If you don’t mind the compromise in performance then that’s OK but be warned that you will not be doing anything in a hurry on this phone.

Don’t read too much into these figures (Geekbench measures processing power while the GFXBench tests see how the phone handles graphics output – higher scores are better), as all these phones are low end, and the numbers are all fairly similar.

The bottom line is if you want better performance than the absolute bare minimum, then the N9 is not the phone for you. You should only get it if £109 really is the most you can afford to spend on a smartphone.

We gave up trying to run Asphalt 8 – you’ll only be OK playing simple things like Candy Crush, and even that is a push here.

The Smart N9 has a headphone jack with some incredibly ropey headphones in the box. The single speaker is also tinny and will only be acceptable for hands free calls when needed and at a push, podcasts on a low volume.

Call quality through the earpiece is decent, and with Vodafone you’ll have excellent coverage all over the UK. Despite its patchy customer service, its actual network is great.

There’s also Bluetooth 4.0 and micro-USB to charge the phone.

As you’d expect for the price, the camera is nothing to write home about. In the brightest sunlight you’ll get shots you wouldn’t mind posting on social media, but with largely grainy results in low light, that’s about it.

There’s a 13Mp camera paired with an 8Mp selfie camera, which again does not produce great results but will do for casual selfies, face filters and video calling. Check out some examples in the below gallery.

A big advantage to low powered phones is that they are generally battery efficient, and the Smart N9 is no exception. Real life use saw us getting over a day’s battery after hammering the phone pretty hard.

Using the phone as our main device, the 2900mAh battery dealt with Bluetooth on for a smartwatch, music and podcast streaming and more while the phone chugged along at the expected slow speed but with excellent power retention.

In the  Geekbench 4 battery test with the screen set to our usual 120cd/m2, the Smart N9 lasted an impressive 7 hours 23 minutes. This means it doesn’t quite make our list of the best battery life phones, but it’s close.

True to the spirit of an operator-branded budget Android phone, the Smart N9 comes pre-loaded with Google apps for somethings and Vodafone specific ones for others. Thankfully, the phone and SMS apps are now Google rather than the clunky Voda replacements found on the older Smart N8.

There is a Tips app to help you around the phone and a widget that annoyingly tries to sell you other Vodafone services (you can get rid of it) but that’s basically it.

The Vodafone aspect of the software is unobtrusive and the simplicity of the launcher makes the phone feel very close to stock Android. And it’s running Android Oreo 8.1 out the box, a good sign – though as ever with cheap phones, they may not receive many security updates, and even fewer full software updates. It’s unlikely to get Android P, and the advantages of the currently up to date software are outweighed by the fact this is a budget phone that runs very slow.