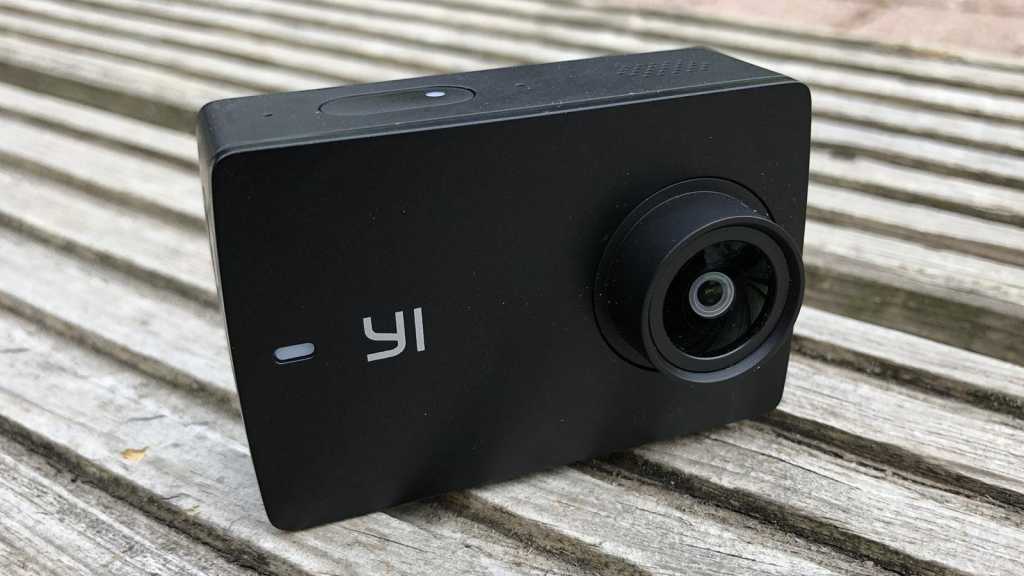 The Yi Discovery may not be much use as a 4K action camera, but it does a decent job at 1440p or 1080p. Note that it doesn’t come with any mounts or any way to mount it, so go for the bundle version or the third-party open mount which works with GoPro kit.

It’s amazing how much you can get for very little money these days, and Yi’s Discovery action camera is one of those gadgets that has a price that seems too cheap for the specs on offer.

Sadly, no. Well, it is if you’re happy with your action happening at a jerky 20 frames per second. We’re definitely not, but that doesn’t mean you should discount the Discovery just yet as it is actually rather good value.

The box includes just the bare camera, battery and a very short microUSB cable. This is one reason for the low price, but a bundle with a waterproof housing, two batteries, a bunch of mounts and a remote control costs £59.99 – also from Amazon. Oddly, this isn’t available in the US.

That’s a much better deal than buying the housing separately, as it costs £25.99, or US$15.99 for a third-party version.

Like the Yi 4K which we reviewed a couple of years ago, the Discovery has a simple, clean design.

There’s a single button – on top – which does double duty as a power switch and recording button. But everything else is done via the 2in touchscreen on the rear – not something you expect to see at this price.

On the side is a microSD slot (no card is included) and a microUSB port for transferring files and charging.

Underneath is a slightly flimsy battery cover, which isn’t up to the build quality of the Yi 4K. And we wouldn’t be surprised if the plastic spring clip mechanism breaks after heavy-handed use.

A big frustration is the lack of any mounting points, such as a tripod thread in the base. So if you don’t want to hold the camera, you’ll need to spend extra on either the bundle mentioned above, or a generic selfie stick that can clamp the camera on its sides.

Fortunately, you can buy a £7.99 open frame mount from Amazon that’s compatible with GoPro mounts.

If you do go for the waterproof housing, bear in mind that the microphone won’t be much use sealed away inside, and the touchscreen won’t work either.

As there’s Wi-Fi you can adjust settings via the Yi Action app, but remember that Wi-Fi doesn’t work underwater, so settings have to be changed before you go under.

In terms of resolution and frame rate here’s what you get:

Since many people still prefer 1080p60 over 4K30, especially for action footage, the Yi Discovery delivers the goods and even offers that more-detailed 1440p setting if you can live with 30fps.

The lens has a 150-degree field of view, and sits in front of a Sony sensor. There’s no stabilisation at all, but you can’t really expect it for this price. The Allwinner V3 chip isn’t a powerhouse – it’s the main reason why the Discovery can’t hit that critical 30fps at 4K.

Shooting modes are chosen on the touchscreen and there’s photo (16Mp), video, burst photo, loop (for dash cam use), timelapse video, and ‘timer’ which takes a photo after the timer counts down.

The touchscreen is fine for everything except scrolling through the menus. This seems to be a coding problem rather than sensitivity and small movements make the options scroll quickly, so it can be a bit tricky to make it land on the option you want to change.

Oddly, there’s no option to adjust the field of view, so you’re stuck with the super-wide 150-degree view which distorts everything.

Since you’re more likely to pull your phone out of your pocket to take a photo, we’ll mainly concentrate on video quality. However, here’s a photo to give you an idea.

Put simply, it’s very good – better than you should reasonably expect for the money. The auto white balance is a bit hit and miss, so on a sunny day in the park it wrongly gave the sky a purple tint, but on other occasions it nailed it and the footage was usable out of the camera. You can set the white balance to Daylight, Cloudy, Tungsten, but there’s no manual control.

Detail is surprisingly good, especially in the 1440p mode. This could make it a good candidate for a GPS-less dash cam, as everything is nice and sharp when you pause the video.

The lack of stabilisation means everything is pretty shaky when you’re moving around, but that’s to be expected.

Dynamic range is quite limited, so high contrast scenes will inevitably mean the sky (or just the clouds) gets blown out to white, or the foreground is under-exposed.

The most disappointing aspect is audio recording. We didn’t experience the out-of-sync issue that we’ve seen others face, but the actual quality of audio is pretty poor. It’s recorded in mono at 68Kb/s, but that’s not a problem in itself. It’s more that the microphone isn’t sensitive enough and it doesn’t pick up what people are saying, even if they’re talking fairly loudly. At least, that’s what all of our videos were like from our sample camera.

So we can’t recommend the Discovery as a good budget choice for vloggers, but it’s great value for capturing action for anyone else with limited funds.