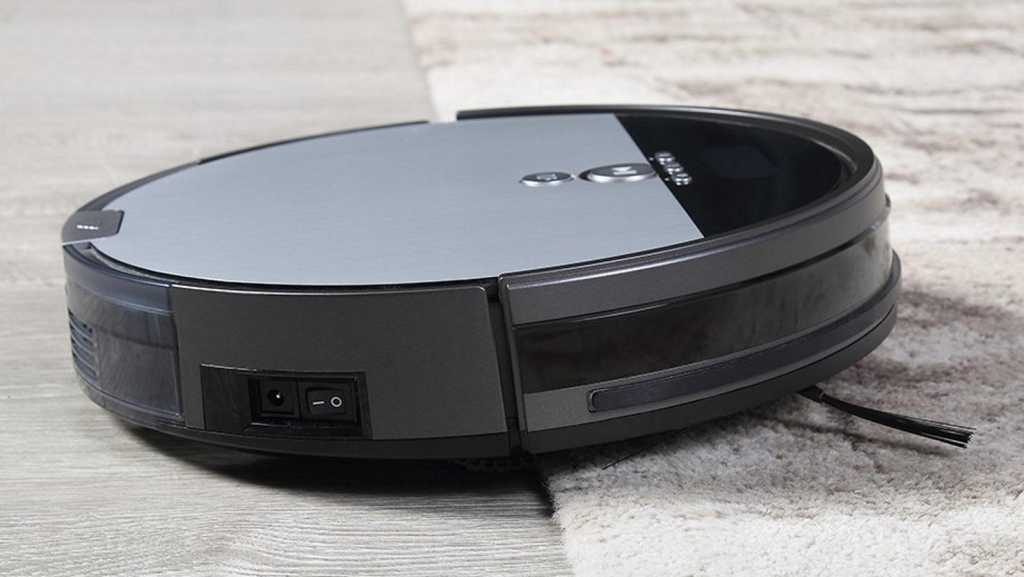 Chunky wheels and a large dust box make this one of the better robot vacuum cleaners we’ve seen. It’s best suited to hard floors with no roller bar to take care of long-pile carpet, but a simple mopping function adds to its appeal. It’s easy to control and set up cleaning schedules for each day of the week, but has no smart features in sight.

Smart or robotic vacuum cleaners are becoming increasingly common among those who would like to automate their household chores. We’re still not at the stage where a robot vacuum can entirely replace an upright model, but the likes of this V8s from iLife take us closer to that reality.

With no roller it’s best suited to hard floors or very short-pile carpets, and with an integrated mopping function you can wash (should we say wipe?) as well as pick up dust, hairs and other dirt. It’s not got the elbow-grease for properly stuck-on grime, but as an interim solution between full cleans it’s a great device to have around the home.

That’s three times the price of some of the cheapest robot cleaners, but nowhere near Dyson territory. We’d suggest it is significantly better than those cheap vacuums, however, and well worth the extra money in return for the time it saves you in cleaning.

Take a look at our ranked guide to the best robot vacuum cleaners to find out how the V8s stacks up against the latest competition.

In common with the vast majority of robot vacuum cleaners the V8s has a familiar circular design with two side brushes poking out from below. What marks it out from those cleaners, though, is the large pair of chunky ‘RoadRover’ wheels.

These wheels are much bigger than you might find on standard robots, and allow the iLife to comfortably clamber over door thresholds and other obstacles. The company claims it can manoeuvre around anything up to 12mm in height, but we reckon it can actually do a little better than that provided it comes to it at the right angle. The V8s can work with gradients up to 15 degrees, too.

This does raise the height a tad of course, and standing 81mm tall there is likely to be some furniture in your home that the V8s simply won’t be able to squeeze below. In such cases it has a front bumper and sensors (obstacle and drop detection) that mean it is able to intelligently avoid bumping into it once again and happily carry on its way.

The side brushes found on these devices are known for getting clogged up with hair, preventing them from functioning efficiently. iLife says it employs anti-tangle technology and, though we’re not entirely clear on how it works, work it certainly does. This is one part of the maintenance cycle you won’t need to worry about with the iLife V8s.

Emptying the dust box is something iLife isn’t able to get around quite so easily, and in fact the process would work a lot better if there were some sort of alert to tell you when it needed clearing out. But it has made the dust box larger than on its predecessor (up to 750ml), which means less maintenance and, importantly, optimal suction for longer.

In this model you’ll find the motor is actually inside the dust box, which has enabled some space savings on the device. The box slides out from the rear for emptying, and is fitted with a HEPA filter for keeping all that dust locked away inside. You’ll find a spare filter is supplied (you’ll likely want to change them regularly), as well as a cleaning tool, two spare side brushes and two mopping cloths.

The water tank is not as capacious as the dust box, able to store up to 300ml, but it does work much better than other robot mops we’ve tried. This is because iLife has installed a pump that can control how much water is dropped on to the floor, meaning fewer puddles and less drying time.

How likely it is you will use this mop is uncertain, because proper mopping really requires some welly that a simple wipe cannot provide. But should you wish to do so, swapping over the tanks is a simple affair.

One thing you’ll need to watch out for is that there’s no provision for blocking the vacuum entering certain areas, such as a virtual wall. If you have a mix of hard- and carpeted floors in your home or office, you should ensure the iLife is physically blocked from entering carpeted rooms.

The iLife V8s is a nice-looking robot vacuum with a two-tone black and grey body and a high-gloss upper surface that incorporates an easy-to-read LCD and several mechanical buttons. You can operate the device using these, or use the bundled remote control if you prefer.

iLife V8s in use

There are two cleaning speeds on the V8s, and we found both relatively noisy in comparison to other models. That’s something we can live with if it means it’s picking up more dirt, and the iLife certainly seemed to perform well in our tests.

The iLife is able to operate in four modes: Programmed, Max, Edge and Spot. Using its sensors it is able to get right into the corners for a close clean, while the side brushes accommodate for the parts the circular design is unable to reach.

One thing we really like is its intelligent cleaning path. Whereas so many of these sort of devices can appear to have a totally random cleaning path, the V8s knows exactly where it’s going. And that means it’s more efficient, cleaning a greater area in less time.

Battery life will depend on which mode you’re using, but in our tests we got exactly 1 hour 15 minutes in high-performance cleaning, and closer to two hours from the standard setting. When the battery runs down the V8s manages to get itself back to its dock for recharging without getting confused, adding to the theory that it actually knows what it’s doing and where in your home it is.

Using the remote control you can schedule automatic cleaning, and unlike most of the competition you can set a different start time for each day of the week so it fits in with your routine.

That’s about as smart as this iLife V8s gets, though, with no accompanying mobile app or wireless connectivity that might enable it to communicate with other smart home platforms such as Google Home and Alexa. For some users, though, the simplified operation will be a blessing.

A great buy at £299.99/$259.99, the iLife V8s has chunky wheels that enable it to get over door thresholds and other obstacles in your home, a large 750ml dust box that keeps it sucking up that dirt more efficiently for longer, and anti-tangle side brushes that let it get right into the corners without you having to regularly unpick hairs and other nasties that would otherwise jam them up.

There’s no roller bar, which means it is best suited to hard floors, where it will also mop or at least wipe clean your floors. Stuck-on dirt will still require more welly than this robot vacuum can provide, and you’ll need to physically block it from entering carpeted areas.

Battery life is pretty decent and the controls are simplistic, enabling you to easily switch between programmed, spot and edge modes, standard- and max suction, and even schedule cleaning at different times on each day of the week.

It’s not the smartest robot vacuum we’ve tested, with no app or smart-home integration, but in what this cleaner does know it’s something of a genius.