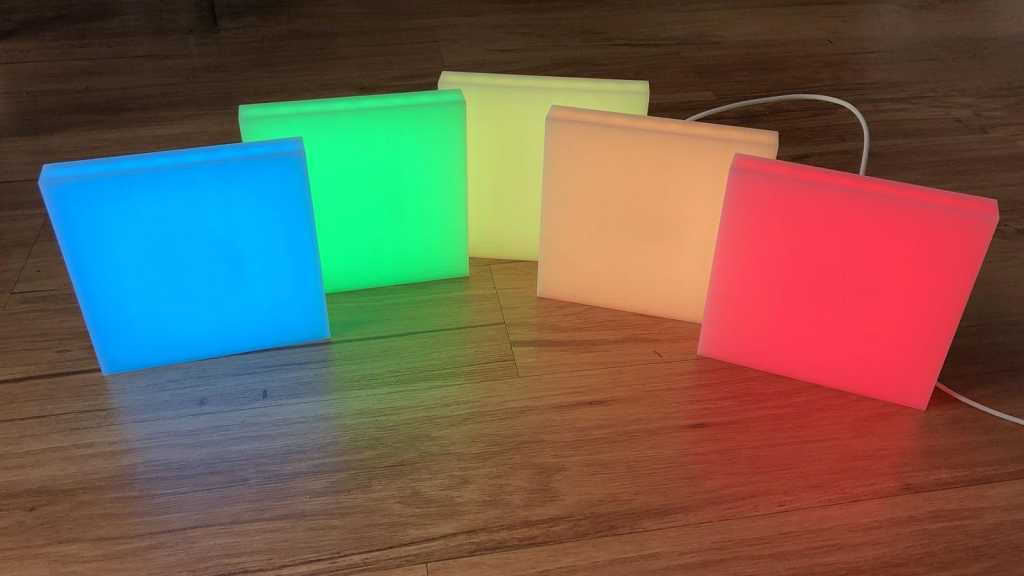 As with LIFX’s Beam kit, you’ll probably want to install the Tile kit into a room with predominantly white or off-white walls to avoid it clashing with any existing colour scheme. The kit can be a little fiddly to install neatly, but it is completely tool-less and doesn’t require drilling. Once up and running, the quality of light and great app make Tile a pleasure to use, and it supports all the popular voice assistants as well as IFTTT. So although it isn’t cheap, you do get what you pay for.

What began with a range of LED light bulbs has now expanded to include statement lighting, such as the LIFX Beam which we reviewed previously.

Now there’s the Tile, which might look at first glance like a square version of the Beam. And in some ways they are very similar kits.

Tile isn’t intended to light up your room: it’s for creating an artistic statement, one you can control from your phone.

Tile doesn’t come cheap. In the kit are five squares which you can arrange in various layouts.

That’s £50 / US$50 more than the already expensive Beam kit. And there’s no way to add extra Tiles: the power supply can handle only the five you get in the box.

One alternative is the Nanoleaf kit which costs £179 from Amazon. You get nine triangles in the box, but you can add more for up to a total of 30.

Each Tile measures 20 x 20cm and has 64 individual zones. You can’t control those individually, but it does mean that you get far more than simply five different colours, one per Tile.

Anyone who owns two or more colour LIFX bulbs will already know the benefits of having multiple lights. At its simplest, the app lets you pick different colours for each light. The next step up is to tap on a theme, which picks randomly from a colour palette to suit the mood.

There are animated effects, too, which are particularly effective on LIFX’s feature lighting. With Animate Theme, you can pick a selection of colours and have them move around – as subtly or obviously as you like – across the five panels. Colour Cycle is similar, but shows the same solid colour on all five tiles and you have the option of choosing how wide or narrow the ‘angle’ of the colour wheel should be to limit or expand the colours used.

As with other LIFX lights, Tile doesn’t only offer bright and pastel colours. The panels can also produce a range of whites from warm through to cold, depending on how you like it.

And as well as basic on/off controls in the app you can set the lights to fade in and out over a period of time you set, which could be useful if you’re installing them in a bedroom as they can double as a night light.

The Day & Dusk feature is carried over to Tile as well. This changes the brightness and hue of the panels over the course of the day in an attempt to mimic sunlight. Again, this could be useful if you’re installing them in an office or a room where you spend most of your day, yet lacks an abundance of natural light.

One difference you’ll spot in the app if you’re used to a ‘standard’ LIFX bulb is the choice of Blend or Solid in the Themes tab. Blend is the one you’ll go for as it means all those zones can be used for different colours, rather than the same shade across the whole panel.

The ‘painting’ mode takes things to a new level with Tile thanks the larger real estate available. The app has been updated so that you can zoom in and have finer control, though it’s still imprecise and akin to using a can of spray paint rather than a small paintbrush.

Similar to Beam, Tile is attached to a wall using 3M command strips. These are strong sticky pads which also use a hook-and-loop system to allow them to be removed and replaced (in the same place).

It means there’s no drilling required, but also that you can’t really change your mind about each panel’s position once they’re up, so make sure you’re happy with your layout and position before you stick them in place. Also, the USB cable from the power supply to the first panel is only 2m long, and since it’s proprietary you can’t extend it.

The panels are joined with shorter 40cm cables, and it can be fiddly to hide these if you want the tiles to touch each other. If you don’t want them touching, the wire will be visible on your wall between the panels.

Again, like Beam, there’s HomeKit support so setting up the system in the LIFX app on an iPhone is very easy indeed. This time we had no issues at all with HomeKit setup and all five tiles were discovered automatically even though we didn’t attach the four ‘slaves’ until after setting up the master tile. Usefully, no hub is required, so the lights will talk directly to your router.

The app allows you to drag the tiles to your preferred layout, which helps when picking colours or painting later on. However, the app will still represent the tiles – regardless of their physical arrangement – as a straight line.

Note that you can’t stick the panels on the ceiling. LIFX says that they are for wall mounting only in rooms without excessive moisture, so bathrooms are out.

The LIFX app has supported Alexa, Google Assistant and Siri for a while now, so no matter which phone or smart speaker you have, you’ll be able to control the LIFX Tile with your voice.

There’s also support for IFTTT so, should you feel the need, you can make your Tile turn blue if you get a Facebook notification or go pink if you get an email.