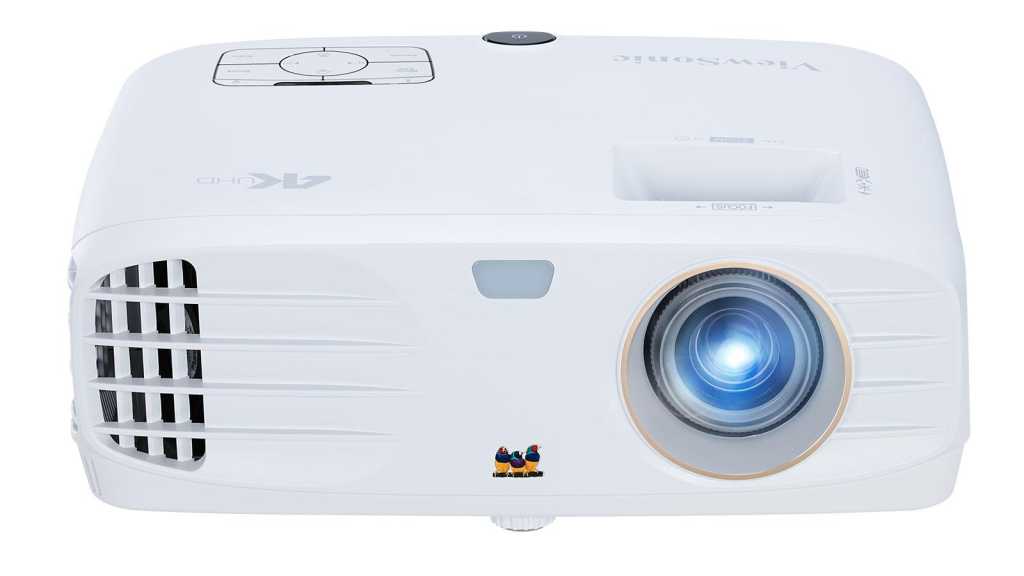 Having seen a few of these now, we’re still impressed by XPR pixel shifting technology even if it isn’t a true 4K projection. The PX747-4K represents one of the most affordable of these machines, and it’s also one of the best in terms of brightness and build quality.

Recently we reviewed the BenQ TK800, and now we’re looking at the very similarly specified ViewSonic PX747-4K. On paper this alternative is cheaper and brighter, but how does it comparing in other respects?

That’s a good bit less than the BenQ TK800, and about the same price as the new   Optoma UHD300X and the previous ViewSonic PX727-4K  that all use the same Texas Instruments XPR technology.

As 4K projectors go, this is highly affordable.

The similarities between the PX747-4K and the BenQ TK800 are striking, as they use the same Texas Instruments XPR technology DMD matrix with DLP projection.

There must be some undocumented projector design rule that designates that all home cinema fans love VGA and only have two devices that need HDMI output, based on recent designs.

A closer inspection reveals that the port selection on this machine is identical to the BenQ projector, even down to the placement on the rear.

It’s also externally identical to the other 4K projector that ViewSonic has, the PX727-4K. From what we can ascertain, these machines differ significantly only in the colour wheel components.

In ergonomic terms, this is a by-the-numbers home projector, designed to be placed on a table or mounted inverted on the ceiling.

At more than 4Kg, this is a hefty piece of equipment. Therefore, it is best to use a proper ceiling mount and attach it to more than plasterboard if you don’t want to contribute to an amusing insurance statistic.

The lens assembly has two manual dials on it, one each for focus and zoom. Keystone adjustments are done with either the surface mounted buttons or the small remote and are limited to the vertical plane.

One part that ViewSonic didn’t include was a lens cap or any cover. Often in a permanent installation, these extras are generally redundant, but it is still nice to have one included.

Also missing is any means to adjust the keystone in other than the vertical plane. Some projectors allow horizontal keystone correction, allowing the projector to be offset left or right of centre. However, if you do that only the very middle of the image can be in focus. That makes it of limited value to a typical home cinema user and therefore much less of a loss.

The USB port on this projector is only included to power a connected device, like a Chromecast. You can’t select USB as a source if you have media files on a flash drive, as is often the case with business projectors.

It does have one other use, to insert a ViewSonic VC10 wireless presentation dongle. But the Chromecast is about a quarter of the price, and does a better job in our opinion.

The headline feature of this design is how bright it is. Where the previous PX727-4K could only offer 2200 lumens, the PX747-4K has a quoted output of 3500 lumens of light.

This increase is entirely down to the different colour wheel technology in the PX747-4K, the same RGBW methodology that BenQ deployed in the TK800.

Having that much light is good in respect of daylight viewing, although it has implications in respect of colour representation that we’ll cover later.

It is worth noting that only one of the HDMI ports has 2.0 specifications, needed to support 4K at 60Hz. The other is only HDMI 1.4, and the best that can do is 4K at 30Hz.

The best that the VGA port offers is 1080p at 60Hz, making it largely pointless on a 4K projector unless you’re desperate for some output. To be clear, that’s a limitation of analogue video technology and not anything ViewSonic needs to fix.

The lack of more than one 4K at 60Hz port dictates that you’ll probably need a powered HDMI switch alongside the PX747-4K if you have a games console, cable box and a Chromecast Ultra that need to connect with a full 4K capability.

We’ve talked about pixel shifting in other reviews, and while not ideal it works in most respects. Or, it is the best solution at this price point, more accurately.

Projected images have very high contrast ranges, making them very good at presenting HDR content, and the PX747-4K is no exception.

However, what you need to consider with this design is how the RGBW colour wheel is a double-edged sword in respect of the colour representation on this design. Because brightness and colour brightness are two different things, and the brightness of the whites presented doesn’t normally help deliver the widest possible colour gamut.

We suspect that ViewSonic engineers identified this issue at the prototyping phase, and if you select ‘Movie’ mode, it gears down the brightness to 50 percent of what is possible.

Which begs the obvious question, why do you need 3500 lumens when you can’t effectively use them?

There are some obvious situations, like projecting a desktop for a presentation, where Bright mode does something more positive. For home cinema users that’s not a common requirement, but it is something that might interest business customers.

For home users, the older PX727-4K with its RGBRGB colour wheel might be a better choice. Because the representation of subtle colours is better on that model, and it also only consumes a maximum of 310Watts and not the 350Watts that the PX747-4K can digest.

ViewSonic PX747-4K: Worth an investment?

Our review so far might summarise the PX747-4K as maybe being too bright for its own good, but that’s only part of the story.

There are some aspects to this design we liked, one of those being the sound output.
As with most projectors, the inbuilt speaker is mono, but the 10-watt driver on this hardware produced a clear and balanced sound that would be fine for general TV use.

That we could very clearly hear that sound is another strong point, because the fan noise on this model is remarkably low, and far from intrusive.

The quoted lamp life is also a strong point, with 15,000 hours on offer to those that choose ECO mode over Normal or Bright. At the brightest settings the lifespan is just 4,000 hours, so selecting ECO or Normal is the best option unless you don’t mind buying another RLC-117 Bulb for £200 ($200) every couple of years.

For gamers, this might not be the best option. Input lag on projector technology is often much greater than on an LCD panel. ViewSonic did manage to reduce the lag from 55ms on the PX727-4K to 43ms on this machine, but that’s still not action friendly.

Some 1080p projectors have lag in the 14-17ms range, like the Optoma GT1080, and therefore better suited for gaming.

The sweet spot for the PX727-4K are people who would like a 4K home cinema projection system and can’t afford the $4000-$5000 for a native 4K solution. For them, this is a bargain.

[Verdict] Having seen a few of these now, we’re still impressed by XPR pixel shifting technology even if it isn’t a true 4K projection. The PX747-4K represents one of the most affordable of these machines, and it’s also one of the best in terms of brightness and build quality.