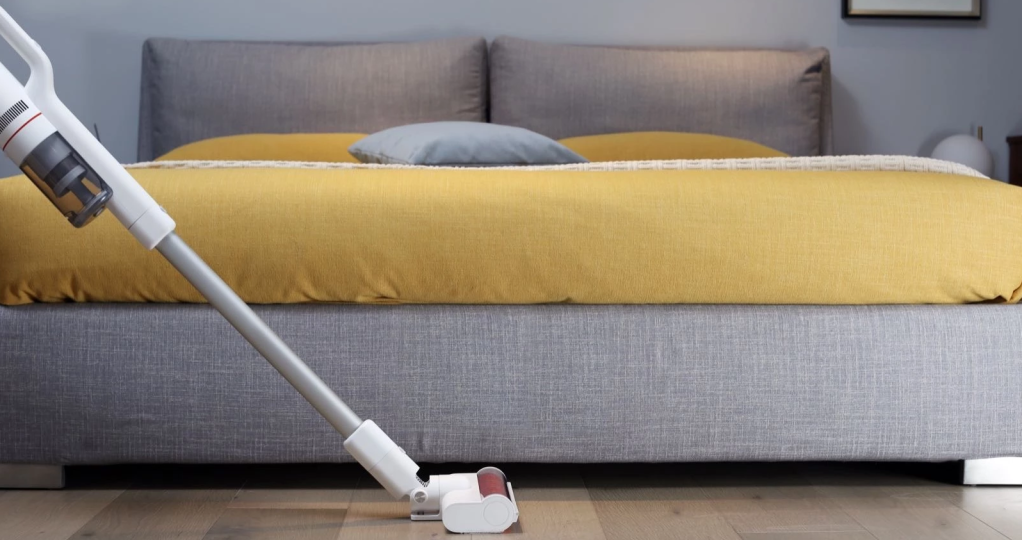 The Roidmi S1 is one of the best cordless vacuums we’ve seen to date; it’s impressively lightweight at only 1.5kg while still offering great suction and almost an hour of battery life on a single charge. If you’re nervous about the jump from corded to cordless, don’t be; we certainly won’t be looking back after using the S1.

While cordless vacuums were once low-powered, badly designed and had terrible battery life, advances in technology mean that’s no longer the case. Cordless vacuums are all the rage right now (even Dyson has ended development of all wired vacuums) and when you look at the Roidmi S1, you can understand why. It’s lightweight, powerful and boasts almost an hour of battery life, making it perfect for one-bed flats and three-bedroom houses alike.

Things have been changing over at Roidmi, with the models that started their life on Indiegogo now having achieved CE approval. What this means is that you can now buy the S1 (previously the Roidmi F8) and the X20 (which you may have known as the Nex) from high-street retailers. UK models now come with a full 2-year UK/EU warranty, a UK plug and can be serviced at a UK-based centre.

We’ve been cleaning the house, the car and just about anything else we can with the cordless vac to see if it can really compete with high-end cordless vacuums. Here’s our Roidmi S1 review.

The Roidmi S1 was originally  crowdfunded on IndieGoGo, but it’s now available to buy direct from Amazon for £249 in the UK or $329 in the US.

While that may seem steep on the surface, we think the Roidmi S1 packs enough of a punch to compete with high-end vacuums like Dyson’s £400+ Cyclone V10. Keep reading to find out why.

The Roidmi S1 is a cordless, battery-powered stick vacuum with a small self-contained bin, much like Dyson’s Cyclone V10. In terms of design, that’s where the similarities end; while Dyson’s vacuum looks almost sci-fi-esque, the Roidmi F8 is simple in design. It’s mostly white with a handful of red accents, and features a large handle that surrounds much of the rear of the vacuum.

The 270-degree curved handle that has been designed to be easy to grip and comfortable from any angle, allowing you to keep a firm hold on the vacuum, whether it’s standing upright or flat on the floor.

It’s also impressively light, especially when you consider all the tech packed into its relatively slim form. It weighs in at 1.5kg, more than a kilo lighter than Dyson’s latest cordless vacuum, making vacuuming less hard work and more of a joy to do. Whether you’re lifting it to reach those cobwebs in the corner of the room or you’re down low vacuuming under a bed, the combination of a large handle and lightweight design make the Roidmi S1 perfect for the job. 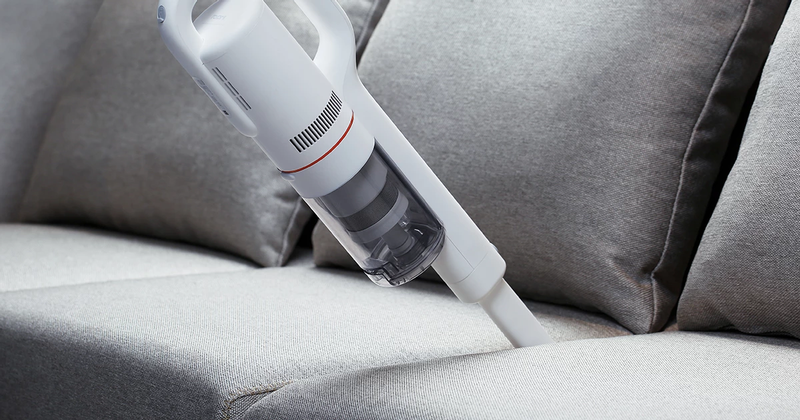 Our only gripe with the general design is the size of the dust bin. While the one-button removal and easy emptying are great features to have, we do think that the bin is a bit on the small side. We get it; the Roidmi S1 is designed to be as slim and lightweight as possible, but with a 0.4l capacity (compared to 0.7l on offer with the Cyclone V10), you’ll find yourself emptying the bin fairly regularly.

Let’s move on to what matters; the vacuuming. The Roidmi S1 offers two cleaning modes; standard and enhanced, though we’ve found that the standard clean is more than enough for most surfaces. Offering 115W of suction power, it sucks up dust, dirt, hair and just about anything else in its path, and rarely requires a second or third pass – especially if you kick it into enhanced mode for a deep clean on carpets.

The Roidmi S1 comes with attachments; not as many as some competitors, but enough to get the job done. Besides, the majority of attachments tend to *ahem* gather dust the majority of the time. The main attachment is a motorised roller with both a nylon velvet brush and a carbon fibre brush. The former is ideal for cleaning wood floors and tiling, while the latter uses carbon fibre strips to really dig up dirt and particles from carpets. The roller also sports an LED strip that’ll automatically turn itself on in dark environments so you can always see where you’re vacuuming – a nice touch from Roidmi, adding to the high-tech feel of the vacuum. 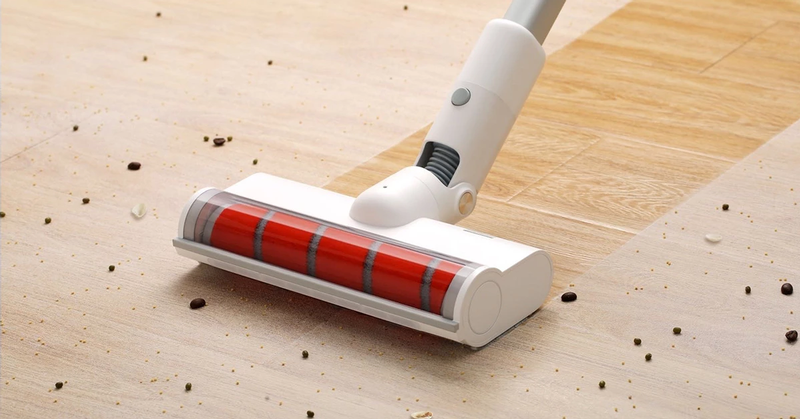 In addition to the motorised roller, you’ll get a flexible extension pipe, a small bristled head and a long flat suction head in the box, along with a spare filter. This should suffice for the majority of environments, from the vacuuming the living room to cleaning out the car. If you want to splash out a little more, you could always pick up the electric anti-mite brush for your bedding and mattress.

While most people focus on how much dirt a vacuum can pick up, very few consider the quality of the air being pumped out from it. It’s something that the engineers at Roidmi have considered though; the S1 features a four-layer filtration system that filters out hair, dust, allergens and dirt, absorbing particles as small as 0.3 micrometres to offer MP0.3-level filtration. Roidmi claims that the filtration system purifies up to 99 percent of the air expelled from the vacuum during use, and it’s noticeable, both in terms of smell and general air quality, when in use.

A cool feature of the Roidmi S1 is an accompanying smartphone app that allows you to wirelessly change suction mode, see the status of your dust bin and filters as well as view current battery life levels. It’ll also notify you when you should empty the dust bin and clean the filters. Unfortunately, at the time of our testing the app was yet to go live on the App Store, so we were unable to test this element of the vacuum.

Lastly, let’s discuss battery life – an element of the cordless vacuum that’s arguably as important as suction power. After all, you could get a fantastic vacuum but if it runs out of charge within 5 minutes, it’ll be nigh-on useless. Thankfully, that’s not the case with the Roidmi S1. When using the standard suction mode, you get around 45-50 minutes of use (close to Roidmi’s 55-minute claim) which should be more than enough to vacuum the majority of flats and small houses, although this dramatically decreases if you enable the enhanced suction mode. 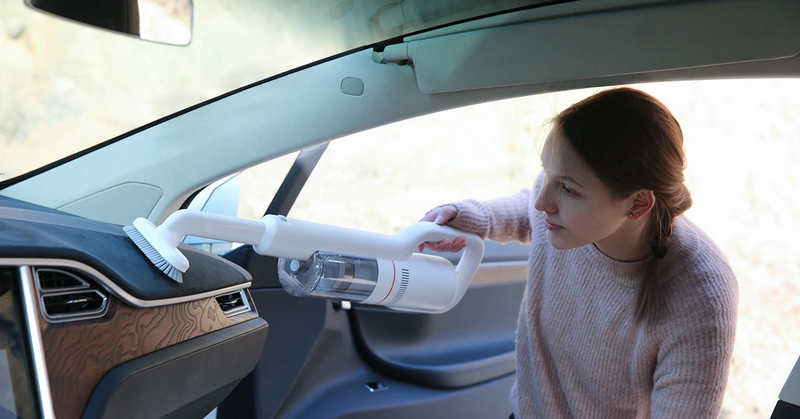 With the enhanced suction mode active, the battery life drops from 50 to 10 minutes before requiring a charge, a process that takes around two and a half to three hours to go from flat to full capacity. The enhanced suction is ideally used in short bursts when required, and when you’re switching between the two modes as you clean, you’ll get around 25-30 minutes of charge (depending on usage, of course). You can check the battery life at a glance via the four LED lights on the body of the vacuum at any point.

The charging process is pretty smooth though; the Roidmi S1 comes with a magnetic wall mount that doesn’t require any nails to install. Instead, the wall mount attaches to a transparent sticker that you can stick to almost any surface with minimal effort. The charging cable that clips into the side of the mount is pretty short though, so it’s worth putting the wall mount near an outlet.

The Roidmi S1 is one of the best cordless vacuums we’ve seen to date. It’s impressively lightweight at only 1.5kg while still offering great suction and almost an hour of battery life on a single charge, along with a variety of attachments and more novel features like smartphone support.

Our biggest gripe is with the small 0.4l bin, which means you’ll have to empty this fairly regularly. But beyond that, this is an easy cordless vacuum to recommend, offering performance close to the best from Dyson and Philips at a significantly lower price.