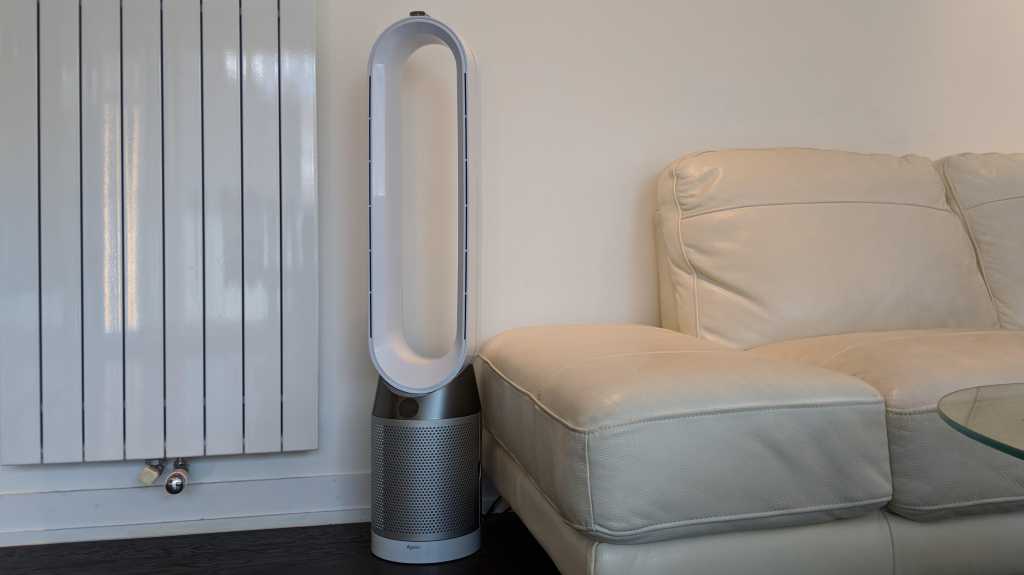 Whether you’re interested in the Pure Cool because you want an air purifier, or just want a Dyson fan and are willing to spare the extra cash for the air purification features, the Pure Cool tower is fairly easy to recommend. It’s efficient, it’s quiet, it looks bloody cool, and – most importantly – it just works. Even the smart features, which are usually the first thing to go wrong in connected tech. If there’s one criticism we have for the Pure Cool, it’s the same one we have for most Dyson tech: it’s expensive. £500/$550 is a lot to pay for any fan or air purifier, and it’s hard to say for sure whether Dyson really adds enough to justify the price.

Dyson made a the high-end fan market when it released its first bladeless fan in 2009 (even if Toshiba patented the same idea way back in 1981), and it still feels like the sort of technological witchcraft the company made its name for, impossibly hurtling air around the room without any (visible) fan blades.

Dyson hasn’t rested on its laurels since then, and has worked to improve efficiency, reduce noise, and add additional models featuring heating, app support, and more recently air purification in its quest to make the best fan it can. That’s where the Pure Cool models come in, and we’ve been testing out the new Pure Cool tower fan, announced alongside the Cyclone V10 cordless vacuum, to find out how well it can keep things cool (and clean) in the midst of a humid London summer.

If you head to Dyson’s website, you’ll find that there are actually a few different Pure Cool models available, so you’d be forgiven for being a little confused by the different versions.

You can also still buy some older models too though, which are named Pure Cool Link – after the Dyson Link app (which the more recent models also support, confusingly). You can get the  Pure Hot + Cool Link (which includes heating), but you can head to other retailers to buy the Pure Cool Link tower or Pure Cool Link desk.

We’ve reviewed the latest model in the Pure Hot+Cool. Also check out the Dyson Cool desk fan, which is about half the price but doesn’t have the smart features or air purification.

For some reason the US also gets extra colour options: in the UK the new models only come in white, while if you’re in the US you can get both sizes in either white, ‘nickel’, or blue. 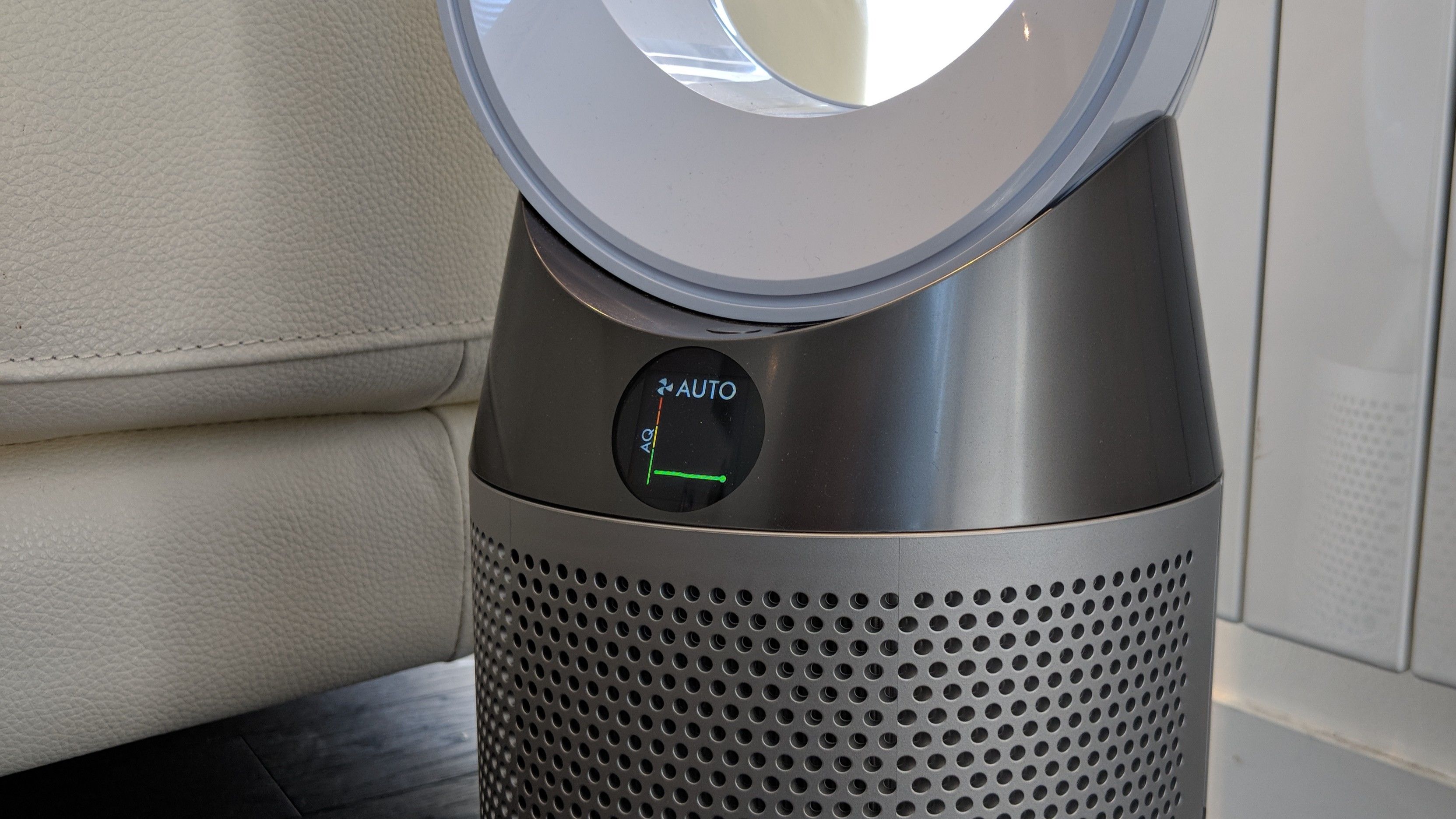 This is the second generation of Pure Cool fan from Dyson – and follows many more iterations of its bladeless fans without air purification – but you might be hard pressed to tell the difference just from looking at them.

That’s not a criticism mind you – the company quickly hit on a design that falls in line with the rest of its sleek, slightly sci-fi range, and has wisely stuck with it, offering only slight tweaks to the format since.

Whether you opt for the tower or desk variant, the fan element sits on top of a stocky base dominated by a metal grille, which is where the twin air filters sit, inside a removable cover for easy replacement.

Above that grille you’ll spot a small, circular LCD screen. This is one of the features new to the 2018 models, and is used to tell you not only what settings the fan is on at any given time, but also to display real-time information on the levels of various pollutants and humidity in the room through a few colour-coded graphs.

That base is identical in design and size between the two models, and the only difference lies in the fan part. Our tower model boasts a tall, thin, oval design which leaves the whole unit about 1m tall, ideal for sitting in the corner of a living room or bedroom. The smaller desk version has a rounder, shorter design, but it’s worth noting that at 0.7m tall it’s still not exactly compact. It will fit on a desk, but it had better be a pretty big desk. 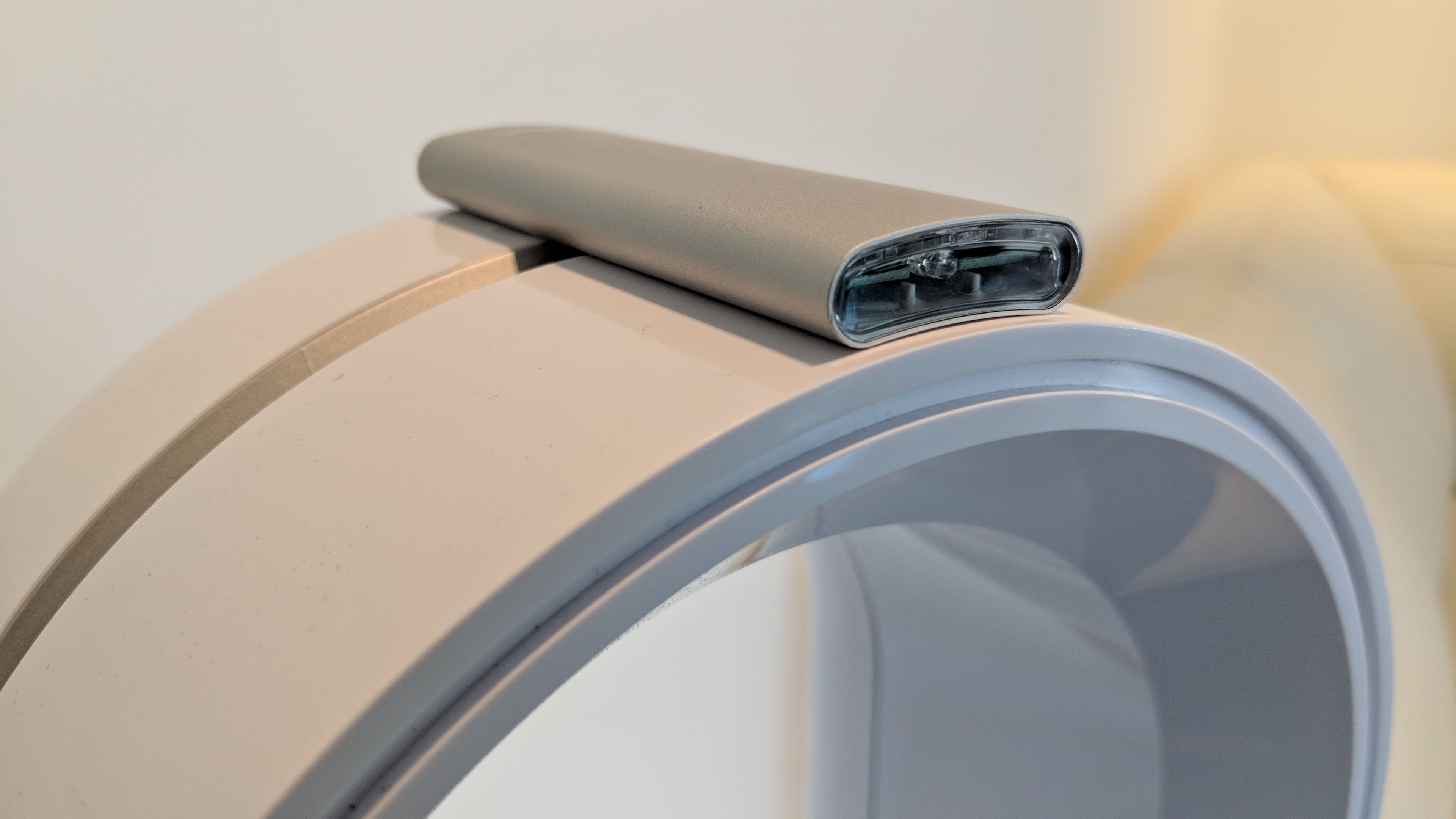 Alongside the fan itself, you’ll get a small, slightly curved remote control that lets you control the main functions. As with other similar Dyson fans, this remote is designed to sit smoothly on top of the fan itself, held in place by magnets, so you shouldn’t need to worry about losing it down the back of the sofa.

The Pure Cool is designed to filter out a variety of pollutants and particles, from car exhaust fumes to pollen, and in turn circulate clean air around, cooling the room in the process. In typical Dyson fashion, it’s not so simple however, and the Pure Cool has a raft of different features and settings to run through.

Let’s start with the air purification itself. Dyson boasts that the Pure Cool will filter out 99.95 percent as small as 0.1 microns (so 0.0001mm). That’s a pretty hard claim for us to test ourselves frustratingly, but we can at least confirm that our review unit at least claimed to be filtering plenty of particles out, so that’s something. 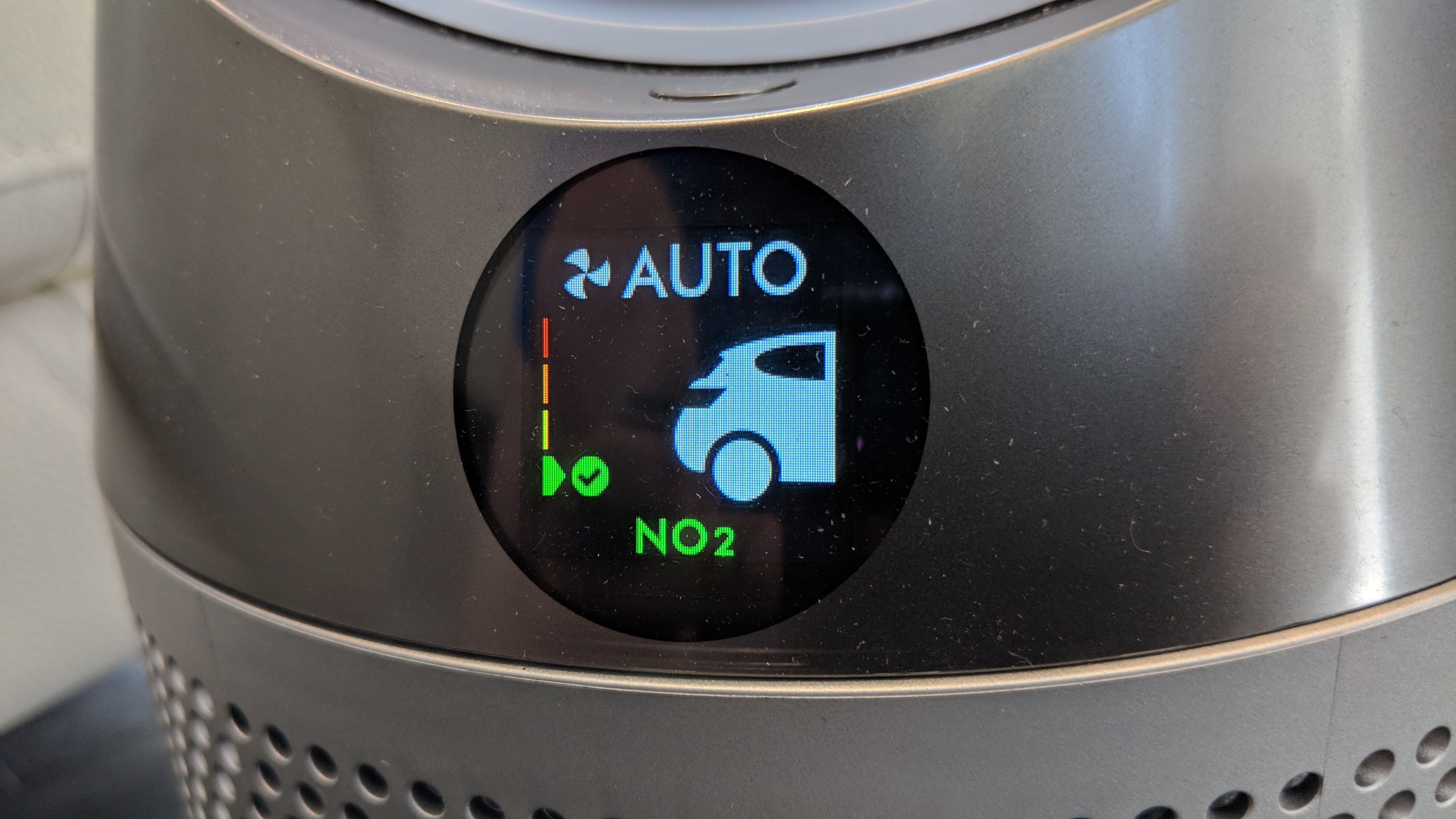 Through the LCD display (and accompanying app) the Pure Cool will give you an overall air quality score, the temperature and humidity, and reports on four specific particle types: PM 10 (those smaller than 10 microns, such as pollen or dust); PM 2.5 (those smaller than 2.5 microns, like smoke or bacteria); NO2 (nitrogen dioxide, found in car fumes or cigarette smoke); and VOCs (volatile organic compounds, which cover gases found in a range of things like aerosol sprays or air fresheners).

If that sounds like a lot to worry about, it sort of is – it’s a bit strange suddenly stressing about a spike in my flat’s NO2 levels, when I couldn’t even have told you what the stuff was a few weeks ago – it’s been a while since GCSE chemistry. Still, I’m lucky enough not to have any allergies or respiratory issues, and for anyone who does – and is thus already worrying about the pollen count or pollutant levels – handy colour-coded graphs could be a godsend.

The Pure Cool works thanks to a combination of two filters: an activated carbon one to capture gases, and a glass HEPA filter to grab bigger particles. Dyson estimates that each should last for a year or so before needing to be replaced – at which point the fan itself will let you know it’s time to swap them out. It’s worth noting that these aren’t cheap though, with the HEPA filter alone costing £50/$70 from Dyson’s site, so there’s a fair ongoing cost to owning one of these. 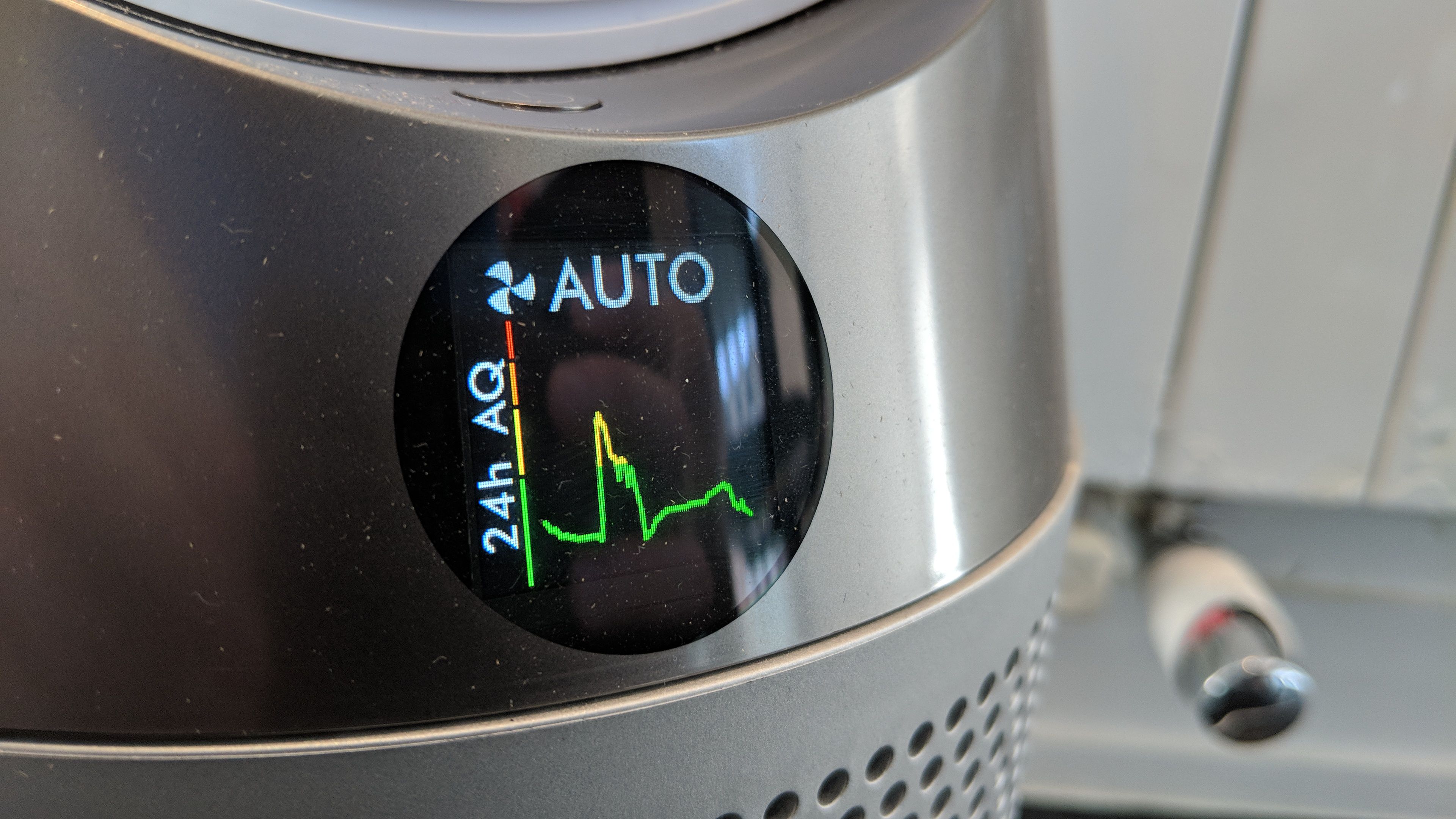 By default, the Pure Cool runs in Auto mode, cranking up or calming down as it registers increases and decreases in nearby pollutant levels. Start cooking something smoky or open a window near a busy road and you’ll see the air quality graph spike into red as the fan whirs into life to filter things out.

It’s the combination of fan and filter than Dyson claims makes the Pure Cool stand out from the competition. By moving air around the room, any pollutants will eventually make their way to the fan to be filtered out, in contrast to fanless air purifiers which can only ever really filter the air immediately around them.

The Auto mode works well, doing its best to keep the graph in the green and reacting dynamically to changes in air quality. There is one big downside though, if you want to use the Pure Cool as a fan first and foremost: while it’s tracking temperature, right now there’s no way to set it to turn on or speed up when the room hits a specific temperature, so in the summer you might find yourself reaching for the remote more than you’d like to speed the fan up and keep you cool. 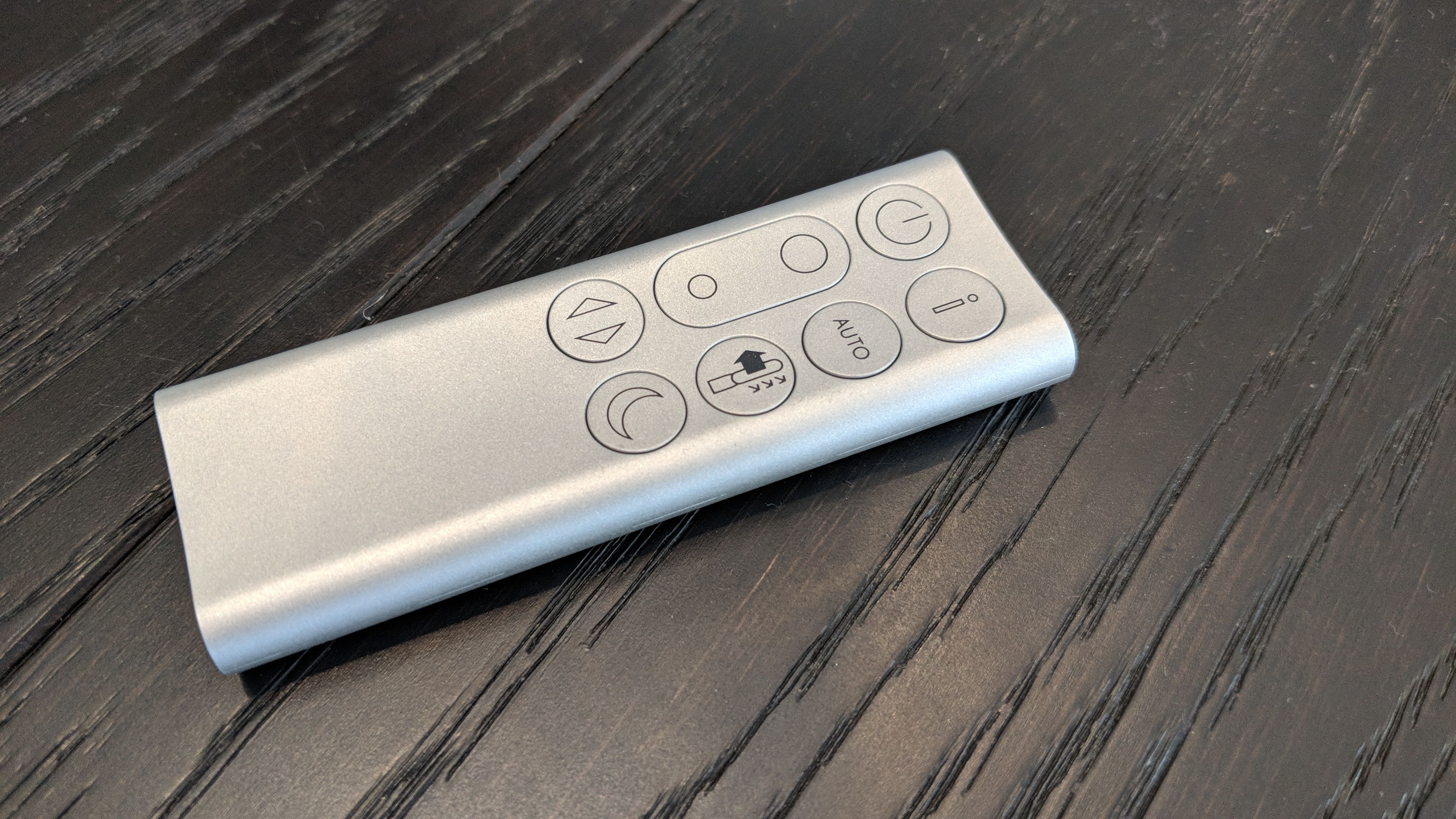 When you do reach for the remote, you at least get a range of options, with ten fan speed settings, a nighttime setting which stays on a lower, quieter speed while you’re sleeping, and a diffused mode which blows the air out of the back of the fan to avoid creating a breeze – ideal if it’s winter and you want the benefits of the purification without any of the cooling.

Thanks to the Dyson Link app, you can control all of this through your phone instead of just the included remote. The app also gives you access to historical air quality data, real-time information on the air quality outside your house, and a scheduling tool so that you can set your fan to switch into certain modes at certain times or days.

Using the app also gives you some extra oscillation settings. The regular remote lets you switch between preset amounts – 45, 90, 180, or 350 degrees – but if you use the Dyson Link app you can also pick which direction the centre of that arc will be entirely within the app, with no need to physically turn the fan to point the way you want.

On low speed settings the Pure Cool is quiet enough to be almost inaudible – and certainly easy to tune out – but on higher speeds you will notice it whirring away in the corner. Still, it’s quieter than most comparable fans we’ve tested, and will push out some solid cooling power before it gets loud enough to be a real frustration.

If it all sounds like a lot of settings and modes to think about, don’t worry: for the most part you’ll probably be happy enough to leave it running in Auto, simply turning it up every now and then when you want more cooling