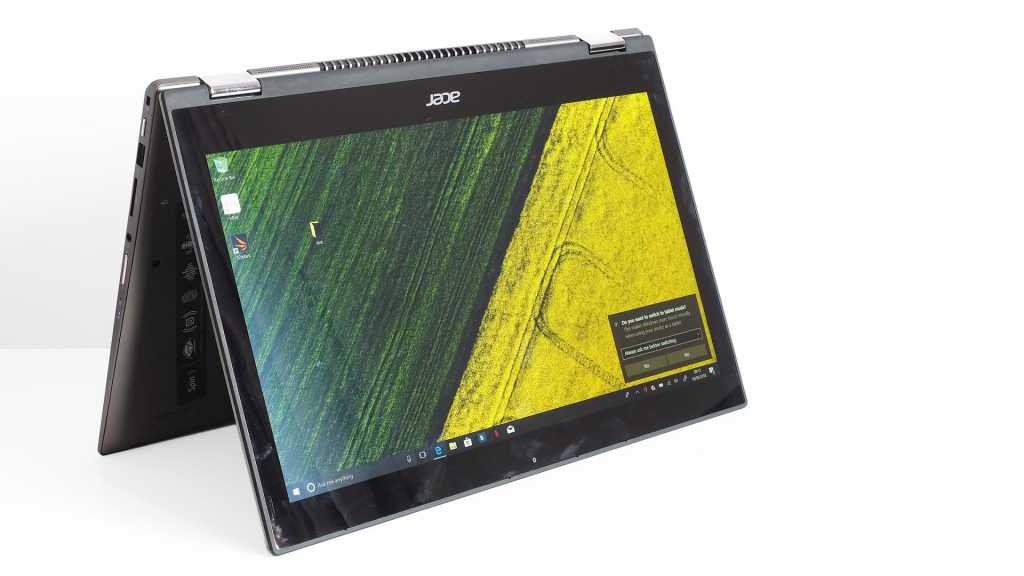 The Acer Spin 5 is a hybrid for the masses. It has a large screen but is not excessively heavy, is made of metal but is not intimidatingly expensive. And when not using its hybrid side it feels just like a normal laptop. There are issues, though. Its screen performs poorly in anything but “easy” indoors environments. The backlight is not bright enough and colour reproduction is muted. HP’s Envy-series rivals are a little more compelling. They have a little more character to their design and there are better options for gamers and are only slightly more expensive.

The Acer Spin 5 SP515 is a mid-price convertible laptop with a much larger screen than most hybrids.

A 15.6-inch screen makes this feel like a desktop-replacer, not just a portable laptop. Long battery life and sub-2cm thickness make the Spin 5 moderately portable, though.

It’s a solid all-rounder. However, it’s not the most compelling option at the price. A dim, undersaturated screen is only just good enough and the Spin 5 is not one of the best-looking metal laptops around.

Don’t want a 15-inch screen? There are also 13in versions of the Spin 5. While they are fundamentally different laptops from one perspective, you’ll also pay £799 for the 13in Spin 5 with a Core i5 CPU and 256GB SSD.

All versions come with a 1-year “carry-in” warranty.

The Acer Spin 5 is an all-rounder laptop. It has a metal shell but costs £800 instead of £1000-plus. 2.2kg weight doesn’t rule out occasional portable use, but the version we’re reviewing here has a 15.6-inch screen. It’s not a small laptop.

It is a “hybrid” one, though. The Acer Spin 5’s hinge lets the screen turn all the way around, until the lid sits on the base. We can’t imagine too many people using this as a huge tablet, but in its tent position it’ll make a good way to watch iPlayer or Netflix while you cook, for example.

We’re fairly happy with its build quality too. Tap the base and you can feel there’s a slightly hollow ring. Do so to an ultra high-end laptop like a MacBook Pro or HP Spectre X360 and they seem dense, perfectly built. However, this is all about the impression it leaves.

The Acer Spin 5’s keyboard is stiff, no annoying flex, and the screen is too.

It does look better on the inside than out, though. The lid is aluminium with a cross-hatched pattern. To our eyes it doesn’t look as classy as plain anodised aluminium or a subtle brushed finish. Opinions may vary.

Inside, the Acer Spin 5 is plain aluminium with a matt finish. Its edges, and those around the trackpad, are bevelled. This reveals the shiny aluminium underneath, which looks good.

The underside is aluminium too, although there’s a sharp border between the side and bottom aluminium plates. Little parts like this and the slight hollow ring to the main body tell you the Acer Spin 5 isn’t an ultra-premium laptop. However, it’s priced as such and is otherwise sturdy.

As the display is covered by a single sheet of glass, there’s no raised border either. It’s a slick, professional look, much as the Acer Spin 5 is no style icon.

This is a laptop made for those who want a touch of premium style, but don’t want to pay through the nose for it. The trackpad is one of the budget sacrifices we noticed quite quickly.

The Acer Spin 5’s pad looks good, feels smooth and has decent click feedback. However, its surface is plastic rather than glass.

You’ll feel that characteristic plastic squeak when you glide a finger back and forth over it. We’d prefer a glass surface to the integrated fingerprint scanner squeezed into the top left corner. But many will appreciate this “nice to have” extra.

It’ll log you into Windows in just under a second. However, despite taking longer to “learn” your finger than most, we still noticed it tends to fail to recognise your print fairly often.

The keyboard is a similar case. It’s solid, if not remarkable. The keys action is not particularly deep but typing is quiet and the feel has a good balance of meatiness and crispness.

The Acer Spin 5 has a full keyboard, with a NUM pad. We never have much use for ones, but gamers and spreadsheet hounds may do.

Take a good look at the open Spin 5. For all its metal parts and sprinkling of modern hybrid features, this is a conventional laptop. There’s a big border around the display, making it significantly larger than a MacBook Pro 15. Aside from the hinge, the design is not dynamic.

However, this only matters if you want a laptop to take around with you every day.

A few other screen characteristics limit the Acer Spin 5’s value as such a machine. The display is not very bright. It reaches 232cd/m. You want 300-plus for outdoors use, and maxed out it should look too bright indoors. The Spin 5 does not.

Colour performance is fairly poor at the price too. It only covers 58.5% of the sRGB standard, making deep reds in particular look timid.

Moves and games don’t look that vibrant on the Acer Spin 5. And it’s not a great laptop for photo editing as a result. It uses a pretty standard Full HD resolution (1920×1080).

However, looking at it with the perspective of the average buyer who will mostly do work and the odd bit of video streaming, it’s fine. Contrast of 1169:1 ensures that while colours may not look that vivid, the image as a whole doesn’t seem weak and washed out.

Still, it’s one of the weaker performers for colour at the price.

What use is the touchscreen? Flip the display over and the Spin 5’s Windows 10 software reverts to its touch interface, with a simple home screen of app shortcuts.

If you want to use it as a pitched-up monitor, plugged into a keyboard and mouse, you can use the standard Windows 10 view too. You also get a pressure sensitive active stylus. It’s perfect for casual doodling, and can be used as an alternative to a mouse.

Our Acer Spin 5 has an 8th Gen Intel Core i5-8250U processor. Unlike previous CPUs of this class, it has four cores with eight threads, making it much more powerful than dual-core 7th generation or earlier models.

Thin-ish laptops like the Spin 5 are better than ever for more demanding tasks like video editing or deep editing of very large images.

It scores 3506 points in PC Mark 10, beating a Core i7 laptop from the previous generation. Performance in this particular benchmark is actually very similar to that of the higher-spec 8th Gen Core i7. The far more expensive HP Spectre x360 13 scored 3422 in the same test.

The Acer Spin 5 lacks the ultra-fast SSD you might get in a model twice the price, but even its performance is solid. It reads at 501MB/s and writes at 500MB/s, roughly three times faster than a good hard drive. 256GB storage also gives you a fair amount of space for apps and games.

An SSD is what makes Windows 10 feel smooth day-to-day, more so than the CPU power.

Gaming is the Acer Spin 5’s weak area. While Acer lists a version of the laptop with an Nvidia GTX 1050 GPU it does not appear to be readily available in the UK. Only our model with integrated graphics is.

You get the Intel UHD 620 graphics chipset as part of the processor package. And while general processor performance had improved hugely with this generation, gaming power improvements are more modest.

So casual games and console-style games of the Xbox 360 and PS3 generation will run well, but demanding titles will only be playable with reduced settings and/or resolution. You’ll have to diminish the look of PUBG and Fortnite significantly to make them enjoyable.

If gaming is a priority, we recommend looking for a laptop with at least an Nvidia MX150 or Vega 8 GPU (built into AMD Ryzen laptops). The HP Envy 15 x360 is a top alternative, available with either GPU. Its Ryzen model is £50 more than the Spin 5.

Light tasks cause the Acer Spin 5’s fans to start spinning, but like this its rpm speed is so slow the noise is not at all distracting. After gaming for a few seconds, the fans naturally spin much faster, but they never get too loud.

You hear some of the benefits of a slightly larger shell too, as there’s no characteristic high-pitch whine of the small-diameter fan used in some more petite models.

The Acer Spin 5’s connections will cover most needs. There are two USB 3.0 ports on the left side, a basic USB 2.0 on the right, perfect for a mouse.

Full-size HDMI and SD card slots are here too, now often left out of smaller slim and light laptops.

There’s a single USB-C connector, the Acer Spin 5’s future-proofing. It’s a USB 3.1 connector, meaning bandwidth is 10Gbps rather than the 40Gbps Thunderbolt 3 offers. However, this is only a concern if you’ll plug in a very high-spec peripheral like an ultra-fast SSD.

We may not get all the latest tech, but there’s enough to satisfy most of us. The Acer Spin 5 has a headphone jack and a hardware volume rocker too.

The Acer Spin 5 has stereo speakers. They fire out of the grille above the keyboard. There’s no chance of blocking them unless you use the laptop to thaw out frozen chocolate bars.

Sound quality is fair, but not much more than that. The Spin 5 uses Dolby processing, which has different modes for music and video, and is quite effective at increasing perceived loudness. However, bass is minimal and the speakers sound a little hard at high volume.

The Acer Spin 5’s battery life is great too. Playing a movie on loop at 120cd/m brightness it lasts 10 hours 32 minutes. Even if your work includes some slightly more taxing tasks it should last through a full day.

Its capacity is 3320mAh (4-cell), which is not alarmingly high. But it’s the real-world results that matter. The charger uses a standard cylindrical connector, rather than the USB-C port.