Shadow of the Tomb Raider is undoubtedly the biggest, darkest and most enjoyable Tomb Raider game to date. The attention to detail in just about every area of the game is impressive, and the deadly challenge tombs really capture the essence of what Tomb Raider has always been about – solving puzzles, performing death-defying acts and getting hella’ loot in the process. It ties the trilogy up perfectly, and we’re already waiting to hear about what Crystal Dynamics and Square Enix have planned next.   So, what are you waiting for? It’s available right now on Amazon for only £47 in the UK, while US readers can head to Best Buy ($59.99).

Shadow of the Tomb Raider is the last in the Origins trilogy that kicked off back in 2013, and offers the deepest, most authentic tomb raiding experience to date. The tone is dark, from start to finish, and while previous games in the series saw Lara climb to victory, this time we witness her sink into the darkness. Crystal Dynamics has truly perfected the Tomb Raider formula, with a perfect blend of Hollywood-level storytelling, dangerous puzzles and deadly combat.

From the first scene in the opening act, you’re aware that this is a darker game than those that came before it. Without going into too much detail about the events of the game, Lara quickly realises that there are dire consequences to raiding tombs – not only for her, but people in the wider community and even the world.

There’s a moment early on in the story where you come across a child holding onto a ledge for dear life, screaming for his mother as fire rages around him. In most games, you (or another NPC) would save the child in some kind of heroic deed, but not in Shadow of the Tomb Raider. You hang there, hopeless, as the child plummets to his untimely death right in front of you. There are hard-hitting moments like this scattered throughout the sombre campaign, really drilling in the consequences of Lara’s actions.

Lara’s fall from grace is swift, and the effects on her emotional state are obvious. She experiences sadness, loss, anger, rage and guilt on a new scale, having an effect not only on how she acts in combat, but also on her attitudes towards others. Where she was once empathetic towards others, she now shuns anybody that doesn’t serve a purpose in her journey.

The game’s semi-open world environment is varied, from dark, wet gloomy caves to beautiful sprawling jungles, and everything in between. You’ll come across stunning ancient cities, incredible architecture and some of the most impressive-looking statues you’ve ever seen. Oh, and the God rays, don’t get us started on the God Rays. The game is nothing short of beautiful, and to help capture those amazing vistas, you’ve got access to a dedicated Photo Mode. 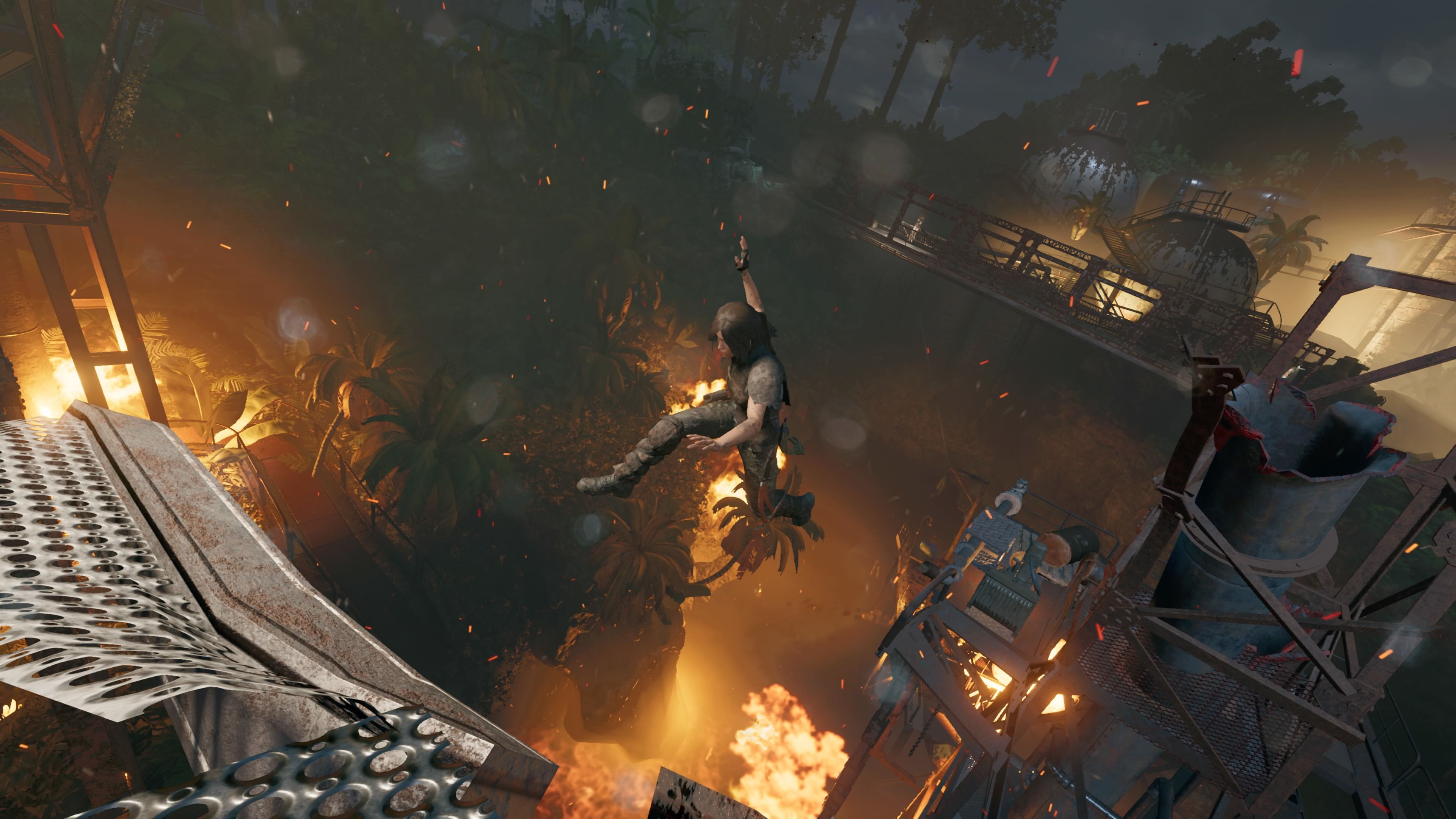 Just as impressive as the visuals is the sound design, which really helps to set the mood no matter the location. From the deafening screams of Howler monkeys as you sneak through the dense foliage of the jungle to the downright-terrifying cries of the mythical Pishtaco as you explore ancient tombs, the sound design really builds tension and helps immerse (and sometimes terrify) you.

Shadow of the Tomb Raider introduces a range of new mechanics that improve just about every aspect of the game. Exploration is better than ever, mainly due to the introduction of spelunking skills. As well as climbing walls with your trusty grapple axe, you can now fully explore cave deep, winding cave systems, rappelling down steep caverns and attempting death-defying jumps with the aim of finding upgrades to your weaponry and clothing.

It’s not just above ground either; Lara now has the ability to swim underwater for extended periods of time, though we’d argue that it’s more dangerous than going face-to-face with a Jaguar. You not only have to balance underwater exploration with your limited amount of oxygen, but squeeze through claustrophobia-inducing crawl spaces and avoid underwater predators including Eels and swarming packs of Piranhas. You’ll feel the same panic as Lara does when she scrambles for breath deep in an underwater cavern, desperately trying to reach the surface, and feel that same relief when she takes that first breath of fresh air. It really is a tense experience, suiting the tone of the game perfectly.

Challenge Tombs are finally that; a challenge. In previous games the tombs have been a little tame, offering little in the way of real death-defying danger. That has completely changed in Shadow of the Tomb Raider; there are more Tombs than in previous games, and they come in all shapes and sizes. Each is stunning in its’ own right, whether poking through the trees in the jungle or deep in a cave system. 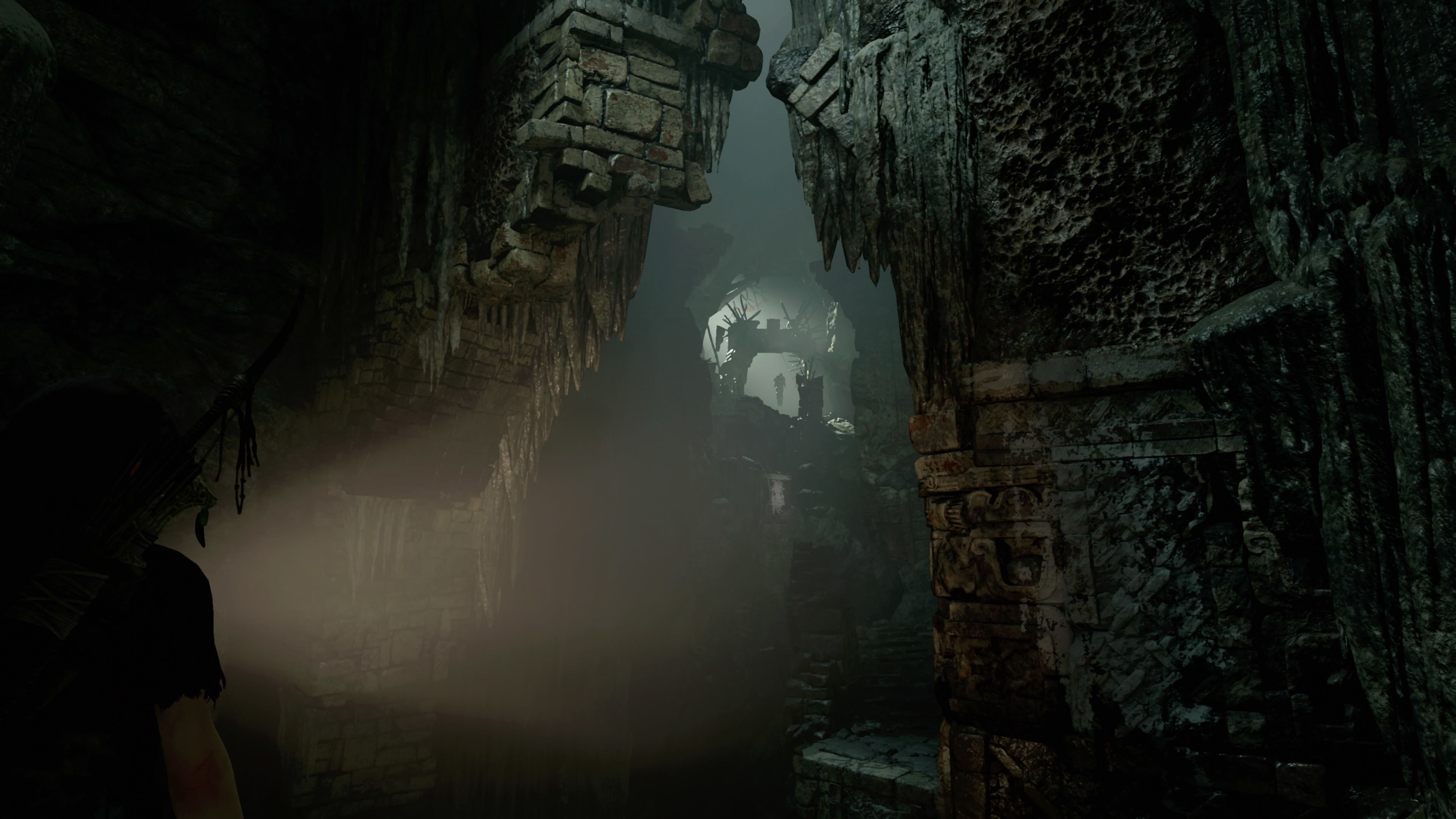 You’ll come up against a plethora of challenges, both mental and physical, and timing is crucial. There are flaming fire pits, elaborate pully systems, centuries-old structures collapsing and much more to deter would-be tomb raiders, and all it takes is one wrong move to join the piles of skeletons scattered along the way.

But while the tombs are more elaborate and deadlier than ever, they’ve not been scaled up to an unbelievable level. Crystal Dynamics wanted the tombs and puzzles to be as authentic as possible, and made sure that all the intricate systems could have been build using Mayan or Incan tools if they had the know-how and motivation. Most are pretty vast, taking a serious chunk of time to fully explore.

Lara is at the height of her game, especially when it comes to combat – she’s good at killing people, and she knows it. This confidence and skill translate to brand new combat mechanics, a systems that in past games we’ve felt has been missing something. Not any more though. 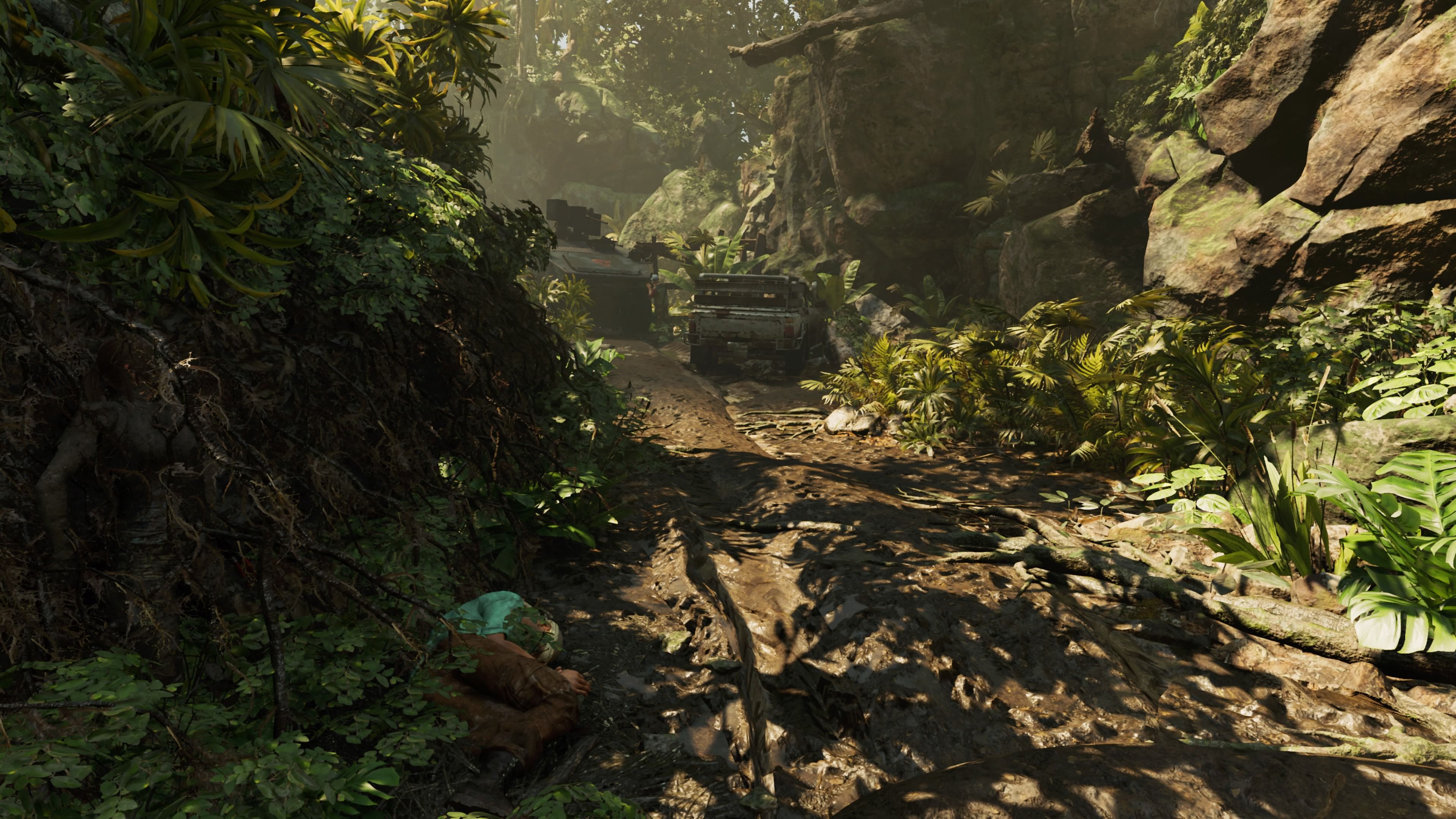 Lara can now cover herself up and blend in against walls of foliage to sneak up on enemies, and the more that you kill without being spotted, the more panicked and frantic the Trinity soldiers become. You can even leave soldiers strung up from tree branches to really strike fear into their hearts, causing them to become distracted and open to attack. It’s all about psychological warfare in the Peruvian jungle!

While in previous games you’re locked into lengthy firefights once you’ve been spotted, you now have the opportunity to engage in open combat and then slip back into the shadows by breaking line-of-sight for a few seconds. It’s the perfect approach to combat, allowing you to balance stealthy takedowns and all-out war to tackle any situation you might find yourself in.

But while there is so much darkness in Shadow of the Tomb Raider, there are moments of hope that still shine through. After all, it’s in the biggest and deadliest disasters that humanity shines. Jonah keeps Lara grounded amidst all the chaos, not letting her plunge too far into her personal darkness. His compassion extends far beyond Lara, with the pair often lending a hand to the range of people they meet on their journey. There’s even a moment where Lara actually laughs, something we’re fairly sure has never been seen in any Tomb Raider game. 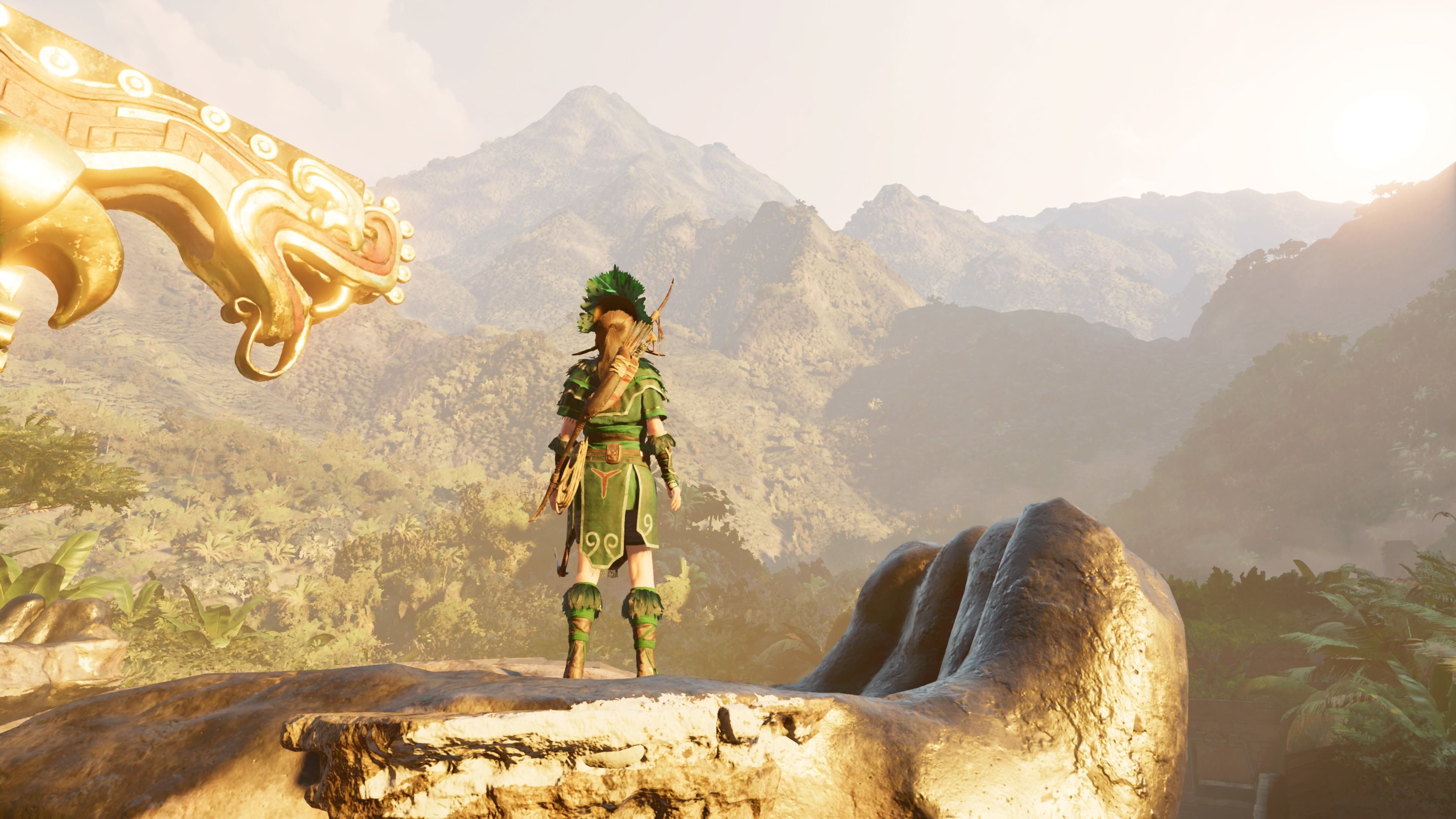 With so much on offer, the game offers the ability to adjust the difficulty in specific areas – combat, exploration and puzzles – to give you a challenge in the areas you want, as well as tweaking the overall difficulty of the game. If you like exploration and traversing the environment, a harder difficulty will make climbable surfaces harder to spot and will remove Survival Instincts, while an advanced combat difficulty will put you up against more aggressive, stronger enemies and will limit the amount of ammo you’ll find on your travels.