I have no idea how Kingdom Hearts 3 compares to Kingdom Hearts, or Kingdom Hearts 2, or even Kingdom Hearts 0.2: Birth by Sleep – A Fragmentary Passage, which is apparently, unbelievably, a real thing that Square Enix actually released. What I can say is that based on the two levels I sampled, the games looks like big, daft fun, packed with loving tributes to the Disney films it draws from and some of the most bonkers combat that modern gaming has to offer.

Kingdom Hearts 3 was one of the most anticipated titles at E3 2018. First announced in 2013 – though teased and rumoured for years before that – the game has been so long in development that some fans had given up hope that it would ever come out at all.

Luckily, those fears proved unfounded, and the third main game in the Disney/Final Fantasy crossover series has a release date, plenty of trailers, and actual gameplay – which we tried for ourselves on the E3 show floor. Here’s how the game is shaping up.

It will release on PS4 and Xbox One, and pre-orders for the game are open now from the likes of Amazon, Game, and Argos in the UK, or Amazon, Gamestop, and Best Buy in the US.

Let’s get one thing out of the way from the beginning: Tech Advisor has one bona fide Kingdom Hearts obsessive on staff, but they weren’t at E3. Instead I was, but I’ve never played a Kingdom Hearts game in my life, so take what follows as the thoughts of someone who can’t tell a Heartless from a Nobody and has no idea what in the hell Kingdom Hearts HD 2.8 Final Chapter Prologue is supposed to mean.

If you’re in the same position, Kingdom Hearts is an ongoing action RPG series that throws together Disney characters, Final Fantasy characters, and its own hugely complex original lore and heroes. Although there have only been two main games, there have been so many spin-offs and re-releases that it can be pretty overwhelming trying to make sense of things.

Kingdom Hearts 3 once again follows series protagonist Sora, accompanied by Donald Duck and Goofy as they travel between a variety of worlds drawn straight out of Disney films, from classic cartoons like Hercules through to more recent CGI fare like Tangled and Frozen. This time around, it will even include Pixar movies like Toy Story and Monsters Inc., along with live action fare like Pirates of the Caribbean. 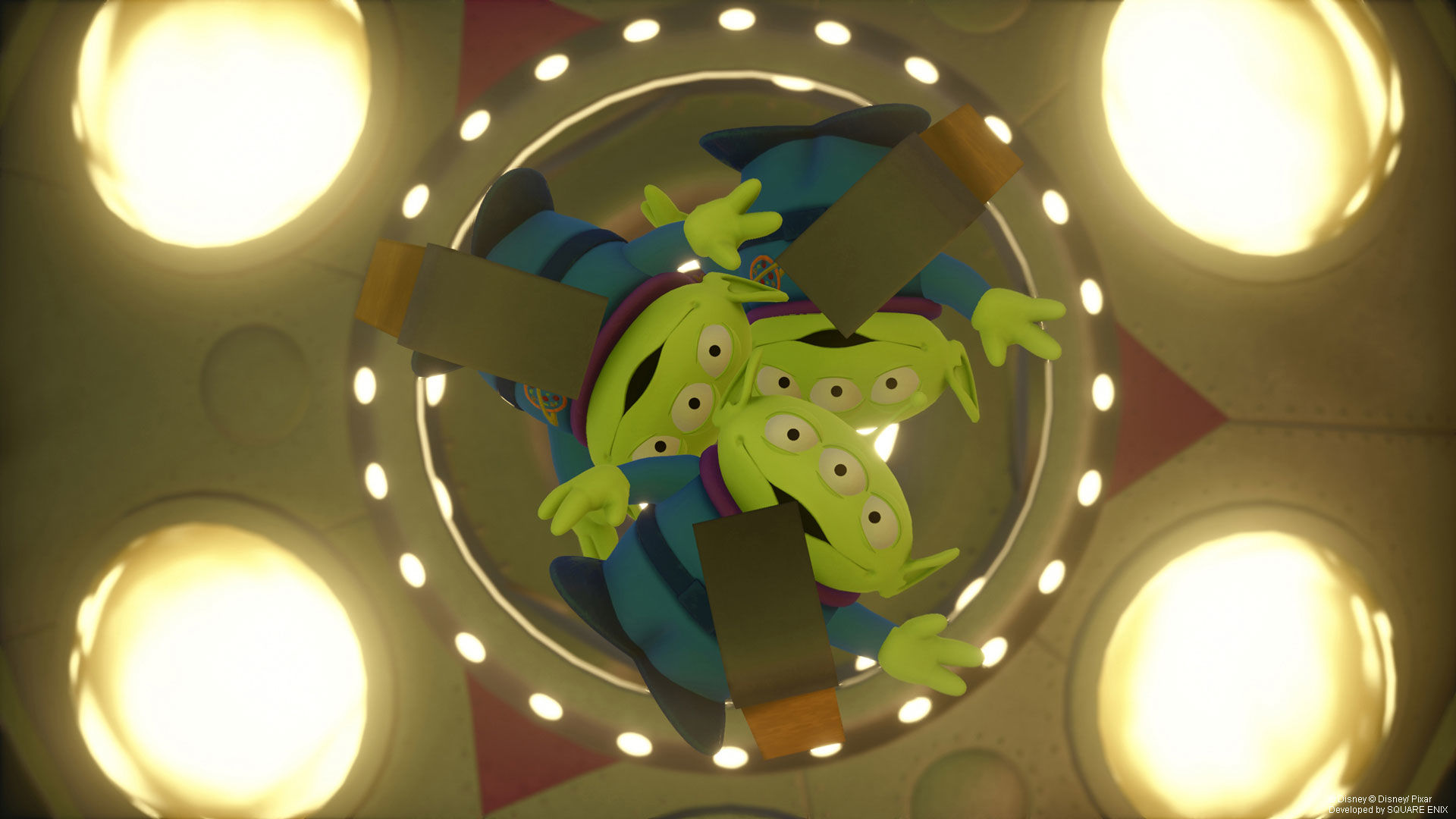 I got to play through two sections of the game: one that saw me team up with Woody, Buzz, and the rest of the Toy Story gang to investigate the disappearance of some of the other toys, and then a massive boss fight against the Rock Titan in Olympus, the world drawn from the ‘90s Hercules animation.

It was the Toy Story demo that arguably shows off the Kingdom Hearts game people have been waiting 13 years for: a big, silly crossover with characters you love, fun cutscenes, and flashy combat.

That combat system is deceptively complicated, a child-friendly veneer masking a few interlocking systems that take a bit of thought and planning to make the most of.

Mash the regular attack button and you’ll do plenty of damage with your equipped Keyblade, but you’ll also want to make the most of spells drawn from Final Fantasy, spectacular summons which get bigger and better as you charge up your Keyblade during fights, and new Link summons which draw on the power of other Disney characters you’ve crossed paths with across the game.

Tapping left or right on the D-pad lets you switch between Keyblades – the demo included ones inspired by Toy Story, Monsters Inc., and Tangled – with each offering slightly different attacks and summons. There’s a benefit to sticking with a single blade for a given fight though, as this is how you charge it up to unleash your most powerful attacks. 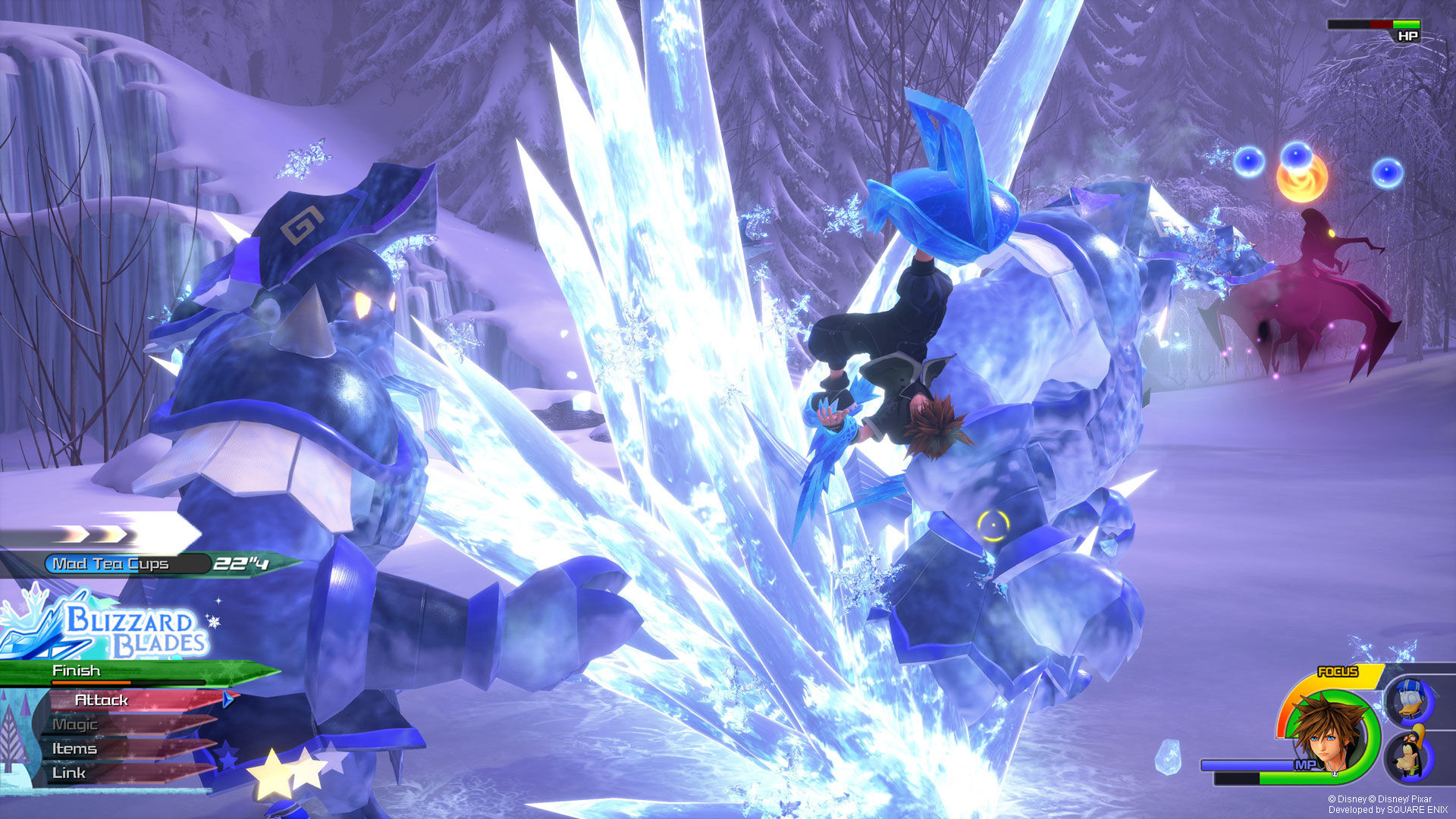 It’s quite a lot to get to grips with at first, made more complicated by a slightly unfriendly interface that tries to force a turn-based JRPG menu into real-time combat. We’re sure players will get used to it across the course of the game, but it’s definitely not intuitive for new arrivals to the series.

Still, it’s worth getting the hang of for the sake of the big, daft things you can summon mid-fight. Want to trash opponents with some glitzy spinning teacups or a giant swinging pirate ship? How about riding a glowing version of the Big Thunder Mountain train through the sky as you shoot at Olympus’s colossal rock titan? Or just summon Wreck-It-Ralph to take care of things for you?

It’s all tremendously over the top, and in that sense it’s pretty easy to see the series’ appeal. Who wouldn’t want to see Donald Duck team up with Buzz Lightyear, or hop into a giant robot toy to fight other giant robot toys in an epic shootout staged entirely at shin-height? 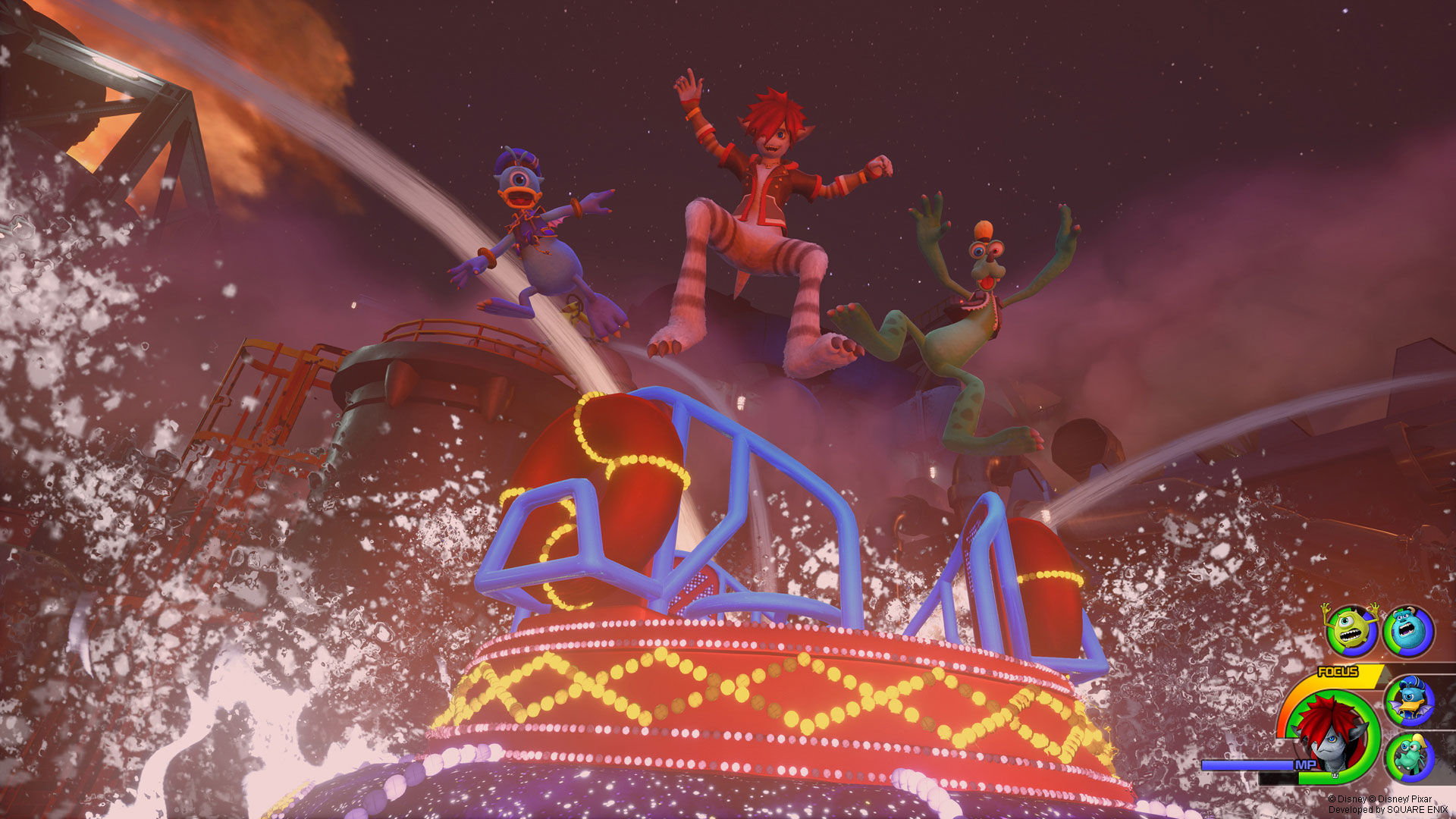 The flipside of Kingdom Hearts’ Disney love-in is its roots in Final Fantasy, though Square Enix de-emphasised that in its twin E3 demos. Sora is a straight down-the-line JRPG hero, with silly hair and a sillier sword, and there’s a glimpse of a silver-haired baddie with a taste for black leather, but I didn’t see much of the sort of big, overly dramatic cutscenes that have dominated the game’s recent trailers.

The focus here was much more firmly on Disney, and for good reason. The Toy Story segment boasted animation not far off the levels of the most recent film, some very capable impressions of the original cast, and writing that actually does a great job of nailing the tone of Pixar’s flagship films. Yes, it’s essentially fan fiction with a budget, but it’s quite good fan fiction, and there’s nothing wrong with that.